Holly Harman: Inside a Hippie Commune

Cloverdale author, illustrator and winery owner Holly Harman, has written the book “Inside a Hippie Commune" (2013), about life in a commune during the late 1960’s. This is an exclusive true story of a Hippie Commune in the Santa Cruz Mountains in 1967-68. The book begins with stories leading up to the time of the commune, the commune itself, and eventually, the demise of the commune. Holly Harman recounts her own experiences in those times. Other people share their stories, and there are chapters about Ben Lomond, Santa Cruz, Scotts Valley, and Big Sur during those historical years. Chapters on The Catalyst, Hip Pocket Bookstore, Merry Pranksters, The Barn, Monterey Pop Festival, Red Dog Saloon, and more. 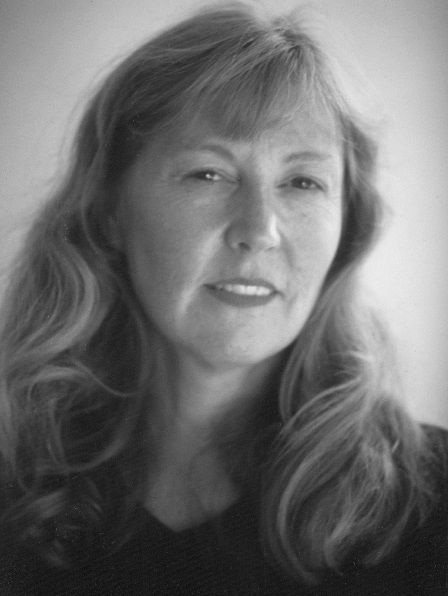 There are black & white photographs on every page by numerous photographers. Accompanying the book will be a DVD, released in 2014, containing footage from 3 films taken at the commune.

Who is Holly Harman? “I am a graduate of the San Francisco Art Institute. I majored in painting and received a Bachelor of Fine Arts in 1974. I have worked as a fine arts painter, art director, and graphic designer in advertising. I was an account executive and art director for Round Table Pizza Corporation for 9 years. After that I worked with my families’ business of Gumby and Pokey, as a set designer, under the art direction of my step father, Art Clokey, the creator of Gumby, and Gloria Clokey, my mother and Art Clokey’s wife of 28 years. We produced 99 Gumby episodes with Lorimar Telepictures. I was the voice over for Gumby’s sister, Minga. We also produced a full length Gumby Movie. I have also taught Graphic Design and Printing Technology at San Francisco City College, worked in the high-tech world of Silicon Valley in broadband network design, and I was the lead designer at Real Goods and the Solar Living Center. Now designing wine and specialty labels under my domain name winelabeldesign.com, I have utilized my spare time to write this book, plus I created a companion DVD and a zzCD Sound track of the music from the Commune. I have also played blues harmonica since I was 14 years old. I also wrote 4 children's books about Gumby and Pokey. This long, strange adventure has brought back many memories as I relive my past and bring this story back to life for many to enjoy.”

How started the thought of “Inside a Hippie Commune”?

I re-met Gene Carlsen, the head of the commune, after 42 years. He placed a box of photos in my lap and said why don't you write a book about Holidays. I tried to research it to no avail and put it on the shelf for 2 years. Then I began working on it and it opened a whole new world for me and I found the research I needed to bring it to fruition. What characterized the philosophy of Hippie Commune?

We were all about getting back to the land and growing our own food and living in harmony together as a group in nature.

The natural setting and freedom gave us a purpose to create a life we wanted to live with our friends and we all were growing spiritually in many ways. Learning from nature and learning from each other and learning from our inner selves about spiritual awakenings and realizations. We were all changing and learning more about living on the land.

Why did you think that the Hippie culture continues to generate such a devoted following?

It becomes a way of life on a road less traveled away from the corporate America. It is a choice. If you can become an individual in this life away from the statis quo, there is much to learn about how important life is to each human being who is born. Striving for ones own goals and happiness is something that most hippies strive for. Also it is important to find new ways to save on energy and take care of this beautiful planet for our survival as humans. There is a lot of truth to this path and that is why others continue to follow in the footsteps we have layed down. The lessons that we have learned we have passed on to the younger generation and so they can learn alternative ways to live.

I am all about music in so many ways. My father turned me on to all kinds of good music when I was young. Music speaks to me and I learn a lot from lyrics in the songs. I just helped produce the INSIDE A HIPPIE COMMUNE soundtrack and it is wonderful. All about that time and place and it really captures the feeling about what it was like then. The songs are very powerful. I was an art director and secretary for a music rehearsal and recording company and at that time music was very important in my life, it was a vortex of incredible music and musicians at my fingertips. I learned a lot about the music business. 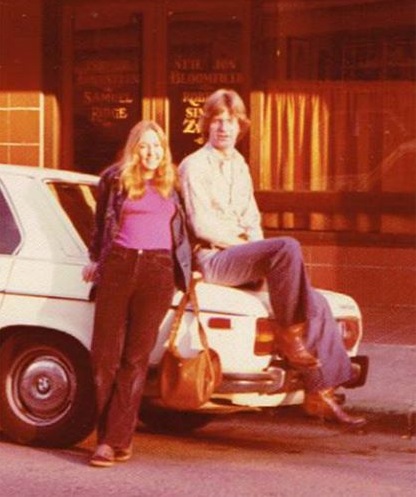 A lot of fine art paintings I did in Art school were inspired by music. I would capture the lyrics in painted images of those lyrics. I relate to songs that some of my friends write, the lyrics ring true to some of the things I am going through and they uplift my spirit. Music is a big part of my enjoyment. My artwork has been so inspired by the music. I am inspired by musicians and their music. It is exciting and energizing to my soul.        (Photo: Holly Harman & Phil Lesh in Fairfax, circa 1976)

When I was about 15 years old I knew I was changing and there was no turning back. I had profound insights into life, something that most high school students did not even think about back then. My mom had the art school and I was painting a lot.

Meeting famous musicians who have been friends of mine and who I admire. Meeting spiritual masters who have taught me lots of spiritual lessons.  Also meetings with people you did not expect to meet up with. Also meeting up with old friends while writing the book.

Are there any memories from Alan Watts, Merry Pranksters and Monterey Pop Festival which you’d like to share with us?

Neal Cassady/Merry Pranksters: Jim Warner drove the bus back down to Ben Lomond. Wow, our own bus! Actually, Jim Warner then sold the bus to Don Lobner and then to Roger Murray in a pot trade. Neal Cassady was no stranger to Boxer Apartments. He would stop by when he was passing through to go see Leon Tabori or (Ken) Babbs in Santa Cruz. I had a few conversations with Neal when he was obviously high on speed. I was able to decipher some of his stories. One story was about when he watched a bear eat salmon from a stream up north. 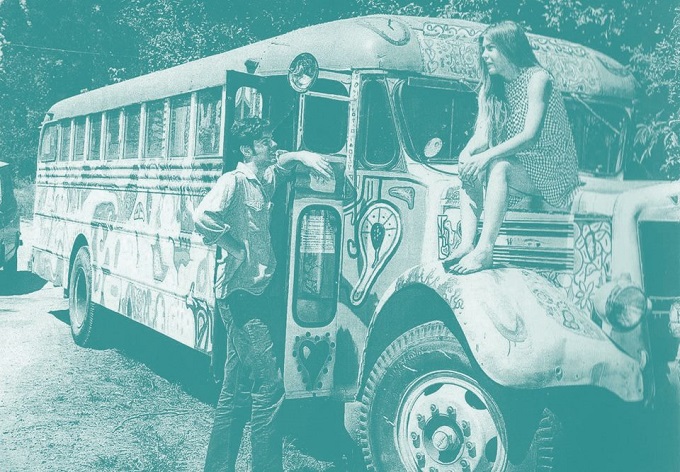 The first thing I remember doing at the Monterey Pop Festival was climbing up on the roof of the horse barn with someone to meet up with Pigpen and his friend at the peak of the roof, to smoke a joint, in private, and eat some popcorn. Pigpen loved popcorn, and being as hungry as I was, this was a nice surprise. Not to mention just being with Pigpen in the moment for awhile getting high and listening to the first Saturday act, Canned Heat, on the stage, which you could see from this distance on the roof.

My youth, my friends who have gone. Not being able to talk to them anymore. Talking to my friends now, from that time period, helps bring me back to who I really am. I miss the Santa Cruz Mountains too, but have visited more lately.

What does to be a female in a Hippie Commune?

Well, there were lots of beautiful single guys. That was fun to pal around with all of them as friends. Some of them became my very closest friends. My hippie girlfriends were very close to me too. We all contributed to help make the commune a nice place to be, but I did not live there full time like others did. My responsibilities were less, I was only 16 and 17 at the time, so I was considered a teenager, while most of the girls in the commune were in their 20s. I was much more of a free spirit flitting around and making myself at home in different situations.

If you could change one thing in the Hippie Commune and it would become a reality, what would that be? If the commune had been off the beaten path and not so close to the Highway, it may have survived much longer. We were bombarded by the press, newspapers, magazines and film.

"Music speaks to me and I learn a lot from lyrics in the songs."

What has made you laugh and what touched (emotionally) you from the Hippie Commune?

When we were down swimming in the river on a really hot day and swinging on the high swing or going in the waterfall. Also doing the light shows at the Barn in Scott's Valley and dancing upstairs to the music all evening and conversing with friends in the living room section of the barn when the band would take breaks.

What were the reasons that made your generation to start the Psychedelic, Social, Politic, Spiritual searches?

Mind expanding drugs opened the door to a reality we had forgotten existed. What life was really about and how to really survive naturally on this planet without destroying it. The American Indians knew how to take care of the land not that long ago. We are still pioneers here. The Vietnam War made no sense at all. Destroying the very planet we live on makes no sense at all. Money, power, and greed is our demise. People need to wake up and take action in a peaceful spiritual way. We can only be beacons of light to show the way. The people have the power to change and make the changes that help the earth and humankind to survive. Nature is an intricate balance that should not be messed with.

I would go to my favorite beach near Santa Cruz for the whole day with close friends, because there is a fresh water waterfall there and lots of beautiful shells. The cliffs are so high and you just spent a good hour climbing down the steep treacherous shale cliffs to get there, no easy task. There is a stone house there. There are many caves to explore. There are lessons to learn there about infinity, love in the spiritual sense, there are questions and answers about life and death. All there in the sand, drawing pictures in geometric shapes. The warm breeze from the ocean clears my mind and quenches my soul. Such a peaceful place to be, as white seagulls pass by and stop to say hello on their way south. Running through the tide as waves pass over my feet. Only a few attempt to cross the gorge to even more pristine beaches. Then it is getting late in the day and time to scale the cliffs to watch the sunset from the bluff. 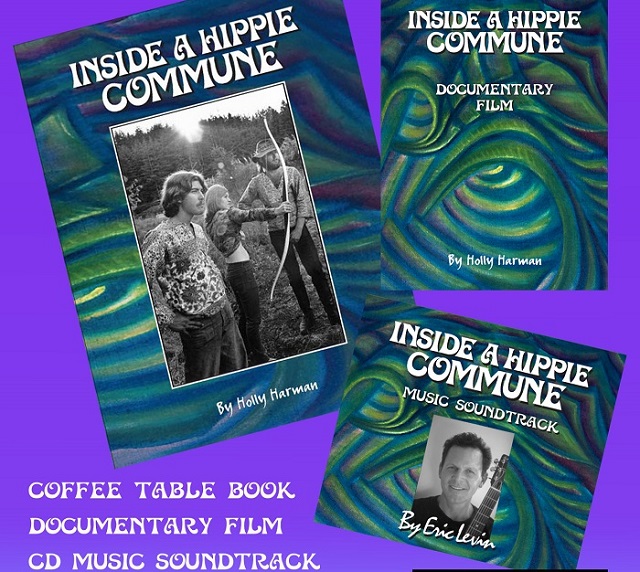