"Blues is a simple music made to simple people and if you don't be simple, probably will play the Blues but doesn't feel the Blues."

Brazilian musician Ivan Márcio fell in love with the harmonica when he was 13 and a year later, in 1991, while listening to Elmore James, he followed the blues, which became the unseparable companion of this harmonica player from Sao Paulo. In 1994 he founded, along with friends from Sao Paulo´s ABC, a band called Bluseiros de Sarja. From 1998 to 2003, he was a member of Zoonose – a hard blues band. From 1998 to 2001 played for Dr Blues, a traditional band, in 1998, released what was the first album in his career. Besides various collaborations with national and international artists and bands, Ivan became a member of Mr Mojo in 2002. In 1999, he started to work with the Prados, the revelation band in the Brazilian blues scenario and pioneer in the jump blues style. 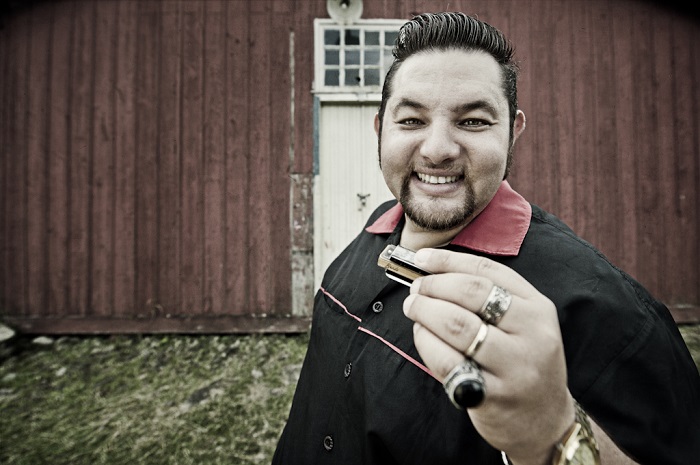 Ivan is a self-learner musician, has played with great national and international musicians such as Howard Levy, Danny Vincent, Greg Wilson, J.J. Jackson, Eddie C. Campbell, Enrico Crivellaro, Nuno Mindelis, Steve Guyger, Jammie Wood, Johnny Rover, Holland K. Smith, Honeyboy Edwards, and Billy Branch. In 2016, Ivan Márcio and guitarist Roger Gutierrez released the album 'Blues From The Basement'. The Brazilians have clearly embraced American blues. They offer a fresh take on the blues. There history in jazz and love of rhumba sets the stage for the blues. 'Blues from the Basement' is an excellent acoustic effort by Ivan, Roger and friends.

Ivan, when was your first desire to become involved in the blues and who were your first idols?

I was 13 years old playing with my friends on the street. My first idols was Elmore James, Muddy Waters with James Cotton on the harp and Sonny Boy Williamson II.

The first show I went was a great Rock'n'Blues Band from Rio de Janeiro called Blues Etilicos. And later I watched Charlie Musselwhite with the complete Band playing the Album In My Time. I confess the first songs who I learned was from Chicago Blues Classics: Billy Boy Arnold, Little Walter, Big Walter Horton, Muddy Waters, Pinetop Perkins, Buddy Guy, Junior Wells, Magic Slim and many others Blues Heroes.

The first best moment was playing with my old Blues trio Bluseiros de Sarja on a small restaurant and there was eating Frank Gambale and Chick Corea. They continued eating and watching our show that was a good sign ... hahaha ... The worst was play on the same day of my grandma funeral. But I believe she is keeping with me in my adventures. 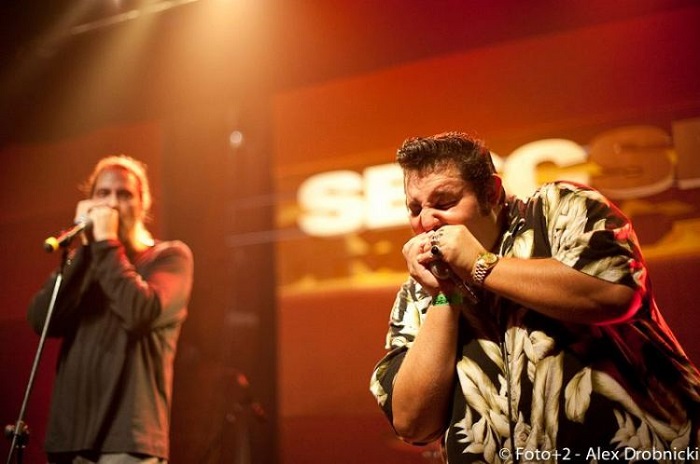 "I believe the public wants to hear classics and I try be honest as possible with them and I love play with my style to sing and play. So I can play a just song who gives me thrill and joy."

What do you learn about yourself from the blues culture? What characterize your music philosophy and songbook?

Blues is a simple music made to simple people and if you don't be simple, probably will play the Blues but doesn't feel the Blues. I love simple songs and the most part of my setlist are songs who hit me deep on my heart.

I believe the public wants to hear classics and I try be honest as possible with them and I love play with my style to sing and play. So I can play a just song who gives me thrill and joy.

How do you describe Ivan Marcio’s sound and progress? What experiences in your life make you a GOOD bluesman?

Ivan Marcio is adjective of fight, joy and this reflect on my sound. I'm not a Bluesman. I'm only a musician who preserves the history and teaches to the next guys who I know.

The Blues doesn't have time and this is more important. The rest is the rest and finish... 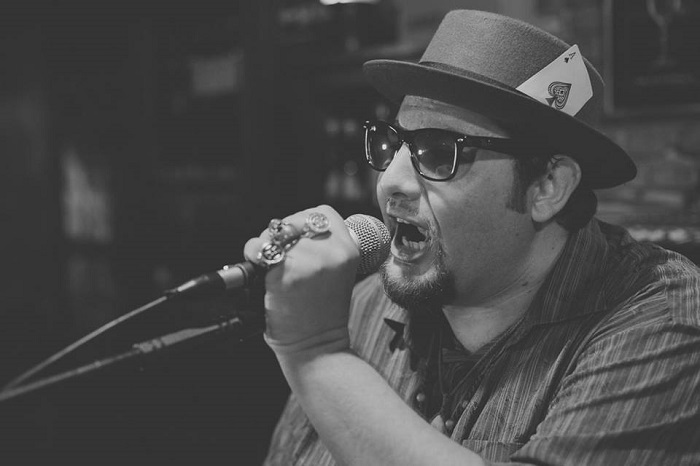 "The media sucks to the Blues. You need a good moneymaker to have some space on tv or radio. The reality is not good and not bad, but I believe in good times will come."

Play with lot of musicians of others styles as Brazilian Folk Music (Band called Folk na Kombi), international artists like Mud Morganfield, Jackie Scott, El Club Del Jump from Argentina and  Jams sessions around the country with local bands on festivals. A good advice from my father Ivan Senior "Do always your best and don't quit".

Are there any memories from Billy Branch and Mud Morganfield which you’d like to share with us?

I played in the same festival who Billy's and I had opportunity to talk some and telling of my experience with teacher on a Social Project teaching harmonica and telling the Blues History. He said congrats me and told me to keep this work because is very precious and important to show the real sense of the Blues word.

With Mud Williams was blasts because he has a lot of great histories with Muddy Waters and your vocal is exactly equal your father. He's a good man, hard worker and we have contact usually. This year I’ll go to Chicago and probably we can do some things together.

Would you mind telling me your most vivid memory from Shirley King and Honeyboy Edwards?

It was a great experience to play with Shirley because I was the musical producer was a blast and play with her. Honeyboy is an example to be followed, because it touches the heart and shows that the Blues are no borders. It was very kind to me during our three shows and it was very important, and tells stories that stuck in my memory.

What has made you laugh from ‘Blues from the Basement’ studio sessions and what touched (emotionally) you? Blues From The Basement was recorded here in my Studio who I teach harp and literally is a basement and; with that the sound was great and I’m really happy with the results. I had time to think about many things to do and many ways to capitation the best sound of drums, bass, guitar and harp. The most important with my friends in all process.

"The BLUES means my way to live. That's all."

What characterize the sound and the future of local blues scene?

I have a positive projection to the Brazillian Blues Future. And the local scene likes to play Stevie Ray style or Soul Music R&B. The traditional we don't have many.

What do you think of Bossa Nova and how close are to the BLUES?

Are different styles. And I don't like Bossa Nova it's sucks.

Do you have any amusing tales to tell from your work with the local blues bands?

I travel alone to play with local bands and sometimes I have some problems with my set list but I try to adjust to keep the bands comfortable. I have some histories about the bad conditions of some Hotel rooms, fights in Bar, drunk guys...hahaha...But shit happens...hahaha

Which is the most interesting period in local blues scene and why? What mistake of the Brazilian blues scene you want to correct?

We have some little blues festivals and we need looking everytime to do some. To correct we need Kill the Hobbies musicians who playing for free or for beer and let the real hard workers do this. (I’m not kidding)... I'm really unhappy to play in clubs because we don't have any respect because we have this fuckin' guys. I'm just playing on theaters, social projects and festivals around the world. But I have miss to do some good things in my city (São Paulo) but the money....ow boy!

Telling me your most vivid memory from your sessions with Bluseiros de Sarja, Zoonose, Dr Blues, Mr Mojo, and Prados... 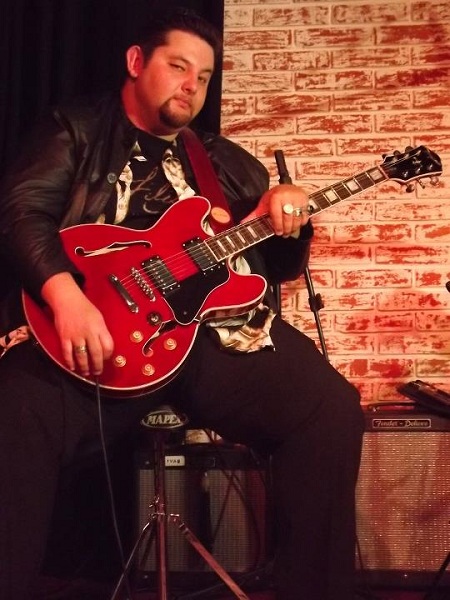 I thank all the bands that were part of my story and this is the most important. I try to keep me in this and dreaming about the future and it will be better.

"The Blues doesn't have time and this is more important. The rest is the rest and finish..."

When it all began for the blues in Brasil, who is considered the local "godfather" of the blues?

The Blues Scene was born in 60's with a Rock generation called Jovem Guarda. But I have great respect to André Cristovam who was for me the real deal Brazillian blues musician.

What are the most popular local bands of blues, do the media help the blues? Make an account for current realities of the case of the blues in Brasil

The media sucks to the Blues. You need a good moneymaker to have some space on tv or radio. The reality is not good and not bad, but I believe in good times will come.

Which of historical blues personalities would you like to meet? From whom have you have learned the most secrets about blues music?

I would like to meet Kim Wilson. I learned listen my heroes (James Cotton, Charlie Musselwhite and Big Walter Horton). Rick Estrin and Joe Filisko are my Harp Guru..hehehe What do you miss most nowadays from the blues of past and what are your hopes for the future?

I feel miss of Simplicity. Future I don't think about it, I live each day as the last.

"I love simple songs and the most part of my setlist are songs who hit me deep on my heart." (Photo: Ivan Marcio & Charlie Musselwhite)

The BLUES means my way to live. That's all.

The Blues is not a Brazilian Music and it's complicated to Brazilian people understand all context and the most part of time the function of a Blues Musician in Brazil is not just play the Blues but tell the histories and trying to connect musically with the public.

Being on Chess Records watching the first sessions of Muddy Waters and Little Walter!