"In the U.K. we had the advantage of speaking the same language as the country that gave birth to this music (Blues) whereas musicians in Europe were put at a serious disadvantage."

John Hawken (John Christopher Hawken) born in 1940, at Bournemouth, Hampshire (now Dorset). He’s a British keyboard player. He studied classical piano between the ages of four and eighteen at which point he succumbed to the lure of rock and roll. Hawken's first band was the Cruisers Rock Combo (1960 to 1962) but he is possibly best known for his contributions to various versions of The Nashville Teens (1962 to 1968). He was then a founder member of Renaissance in 1969. He also played in Spooky Tooth, Third World War, Vinegar Joe, Strawbs and Illusion, as well as being a session musician. In 1964 The Nashville Teens signed a management contract and recorded "Tobacco Road," at the same time touring with Chuck Berry and Carl Perkins on their first tour of England. 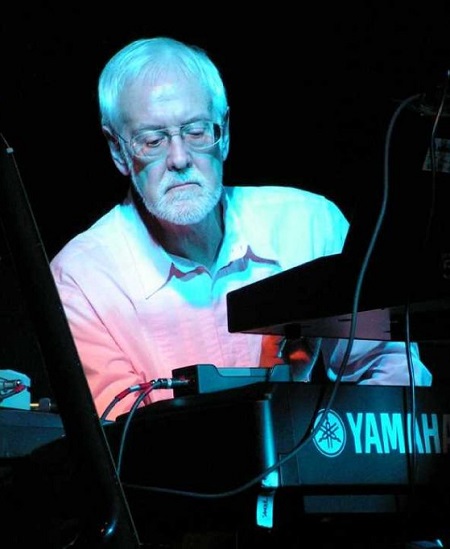 Although subsequent records failed to equal the success of "Tobacco Road," the band worked steadily until Hawken moved on late in 1968. In late 1968 former Yardbird Chris Dreja, John Hawken and steel player Brian (B.J.) Cole were going to form a country rock band. In early 1969 Hawken got a telephone call from McCarty asking if he was interested in the new project. A short time later Jane Relf joined on vocals and Renaissance was born. Live gigs included a tour of the US and work in Europe. This line-up recorded two albums, produced by another former Yardbird, Paul Samwell-Smith. Hawken was ready for a change when Spooky Tooth contacted him in October 1970 for a three-month tour of Europe. In 1971, Hawken joined Third World War. Their singer-songwriter was Terry Stamp. Hawken has recently started collaborating with Stamp and Avery. After a brief spell with Vinegar Joe, whom he left in September 1972, Hawken joined Strawbs in 1973. At his audition for the Strawbs, Dave Cousins introduced Hawken to the mellotron. In 1977, the original Renaissance re-formed. Unable, for legal reasons, to use the name Renaissance, they chose "Illusion" - which had been the title of their second album as Renaissance. The Hawken family moved to the USA in 1979, and Hawken began playing with 'The Rocketmen' in New Jersey. In 2001, the surviving members of the original Renaissance recorded and released Through the Fire under the band name 'Renaissance Illusion'. In 2004 the Hero and Heroine Strawbs line-up reunited, and undertook a number of tours and a new album Deja Fou. On 26 June 2008, Hawken announced his retirement from Strawbs. In 2011 Hawken came out of retirement to perform with Jim McCarty and Jann Klose at Hugh's Room and This Ain't Hollywood, Ontario. Hawken appeared briefly in the David Essex film, That'll Be The Day (1973) as the keyboard player in the band led by Stormy Tempest (Billy Fury), which also featured Keith Moon on drums.

How do you describe John Hawken sound and progress? What characterize your music philosophy?

My sound is definitely 'Old School' and predominantly piano oriented. With certain bands (Strawbs, Illusion & Spooky Tooth) I've played other keyboards and enjoyed the experience (especially with the unpredictable but loveable mellotron) but the piano remains my first love. These days I'm playing mostly 50's and 60's R&R with my band here in New Jersey, and sitting in at open-mike Blues jams. I confess to knowing very little about the Blues but I've learnt a lot from these impromptu sessions & now feel pretty comfortable with the music. My musical philosophy? Less is more. I always enjoyed the playing of musicians like Steve Cropper & Booker T. who selected their notes sparingly but created memorable phrases and great dynamics. Ditto the Motown (and other) brass sections. Listen to any Otis Redding record and feel the power and anticipation of those periods of calm before the next build-up. Sheer magic. "My biggest fear for music, at least at the amateur level, is the general lack of available gigs where new musicians can hone their craft." (Photo: John Hawken with The Nashville Teens)

The most interesting time of my life was undoubtedly the 1960's - the start of my musical career at just the most creative and colorful period. Best moment – seeing our first record 'Tobacco Road' enter the charts Worst moment - being held out of a 2nd storey window by my then manager just because I dared to ask for some of the money we (Nashville Teens) were owed.

My most important meetings were with the artists I listened to as a young man & whose influence on me was profound. Chuck Berry & Carl Perkins, both of whom I played piano for in their very first tour of England in 1964. Jerry Lee Lewis,  Fats Domino, Bill Haley, Gene Vincent, Stevie Wonder, Jimmy Hendrix and so many  others who created magic in their music. I thank them for pointing me in the direction of music as a career.

Are there any memories from The Nashville Teens, Renaissance, and The Strawbs which you’d like to share with us?

Memories. Too many to list, but some random ones: Nashville Teens filling the Budapest Stadium (30,000 capacity) twice in one day. Arriving at Kennedy Airport New York for our first American gigs and marveling at the speed of everything and everyone around us. Playing the Brooklyn Fox Theater for the month of December 1964 as part of an incredible cast of name artists - 5 or 6 shows a day with each act only allowed to perform 2 or 3 songs.

The first Renaissance gig - approached with much anxiety because of the complicated arrangements and effects but turning out to be one of the very best gigs we ever played. The Strawbs, playing and recording our own TV show in Tokyo & being supplied with some of the best equipment and engineers one could wish for. "Less is more. I always enjoyed the playing of musicians like Steve Cropper & Booker T. who selected their notes sparingly but created memorable phrases and great dynamics."

Which memory from Jerry Lee Lewis, Chuck Berry and Carl Perkins (I don’t know if you ever met Alexis Korner) makes you smile?

Random memories: Jerry Lee Lewis entertaining us (Nashville Teens) for nearly 2 hours at the afternoon sound check in a massive stadium in West Berlin. He played a bit of everything, Rock, Country, Blues, and was absolutely stunning. Playing chess with Chuck Berry on the tour bus (he's an excellent player). Recording an E.P. with Carl Perkins and, of course, hoisting a few drinks afterwards. A fine musician and a beautiful person. I never actually got to talk to Alexis Korner, but saw him play a few times in and around London.

From the music of my era I mostly miss the honesty - what you heard was what you got. If the musicians couldn't play (or sing) there was no magic device to improve their performance. Today, thanks to Auto-Tune and other performance enhancing electronics even the most mediocre can be made to sound good. I have to shake my head when some performers today go on about how 'real' and 'honest' their music is, when truthfully, it is quite the opposite.

My biggest fear for music, at least at the amateur level, is the general lack of available gigs where new musicians can hone their craft. In New Jersey where I live, the situation is particularly dire. Back in the '70's & '80's there were gigs aplenty and the venue owners paid good money. Today there are pitifully few places to play & the money offered is insultingly low.

What were the reasons that made the UK in 60s to be the center of Folk Blues Rock searches and experiments? 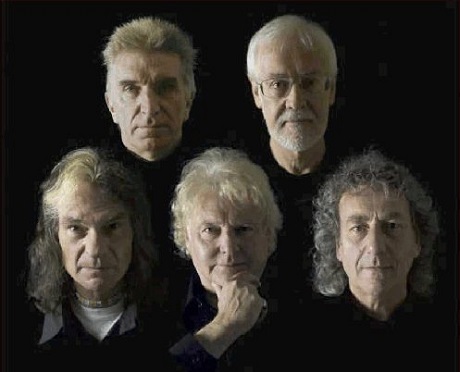 Blues and Rock & Roll originated, of course, in the United States but quickly fired the imagination of British musicians. This was reflected in the type of music played in the clubs, coffee houses and other venues. The '50's Skiffle music (and to a lesser extent, Folk) quickly gave way to Blues and R&R. In the U.K. we had the advantage of speaking the same language as the country that gave birth to this music whereas musicians in Europe were put at a serious disadvantage. I remember being approached by some of those musicians who would ask for the lyrics to particular songs, because up to that point they had been writing the lyrics down phonetically (and coming up with some strange words...).     (Photo: The Strawbs line-up 1973-1975 for the reunion tours from 2004-2008)

What do you learn about yourself from the blues and what does the Rock n’ Roll culture mean to you?

What did I learn from the Blues? Simplicity is an art, possess it if you can. It is easy to sound impressive with a fistful of chords, but to discover an original phrase or approach with only 3 or 4 chords is a real challenge. I'm still in my infancy when it comes to that, but I believe I'm getting better all the time.

If I could change one thing in today's musical world? I would destroy all auto-tunes!

Let’s take a trip with a time machine for the next 24 hours, so where and why would you really wanna go?

Use of a Time Machine for 24 hours? Musically, I'd take a trip 50 years into the future to see what new forms of music had evolved and...how much, if any, of our present day music had survived and was still being played. 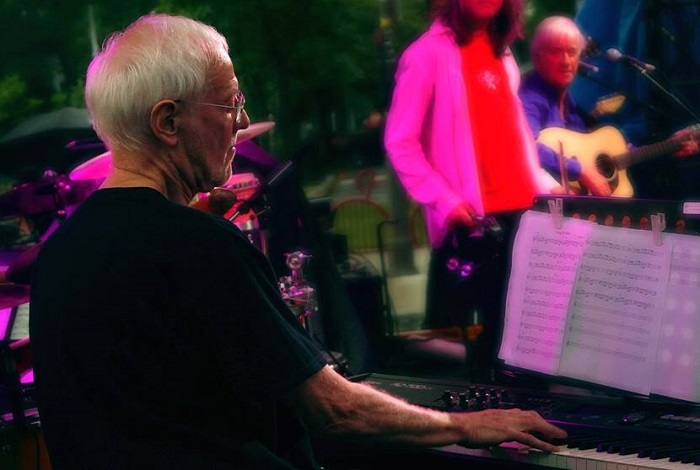