Guitar Mikey: The Real Thing of the Jungle

Mike McMillan AKA Guitar Mikey and the Real Thing are definite proof that blues is fresh and alive. With the funk of James Brown and the intensity of Buddy Guy combined with the heaviness of Led Zeppelin the band has earned the opportunity to share the bill with such artists as The Thunderbirds, John Mayall, Johnny and Edgar Winter and even rock bands the likes of Nazareth. 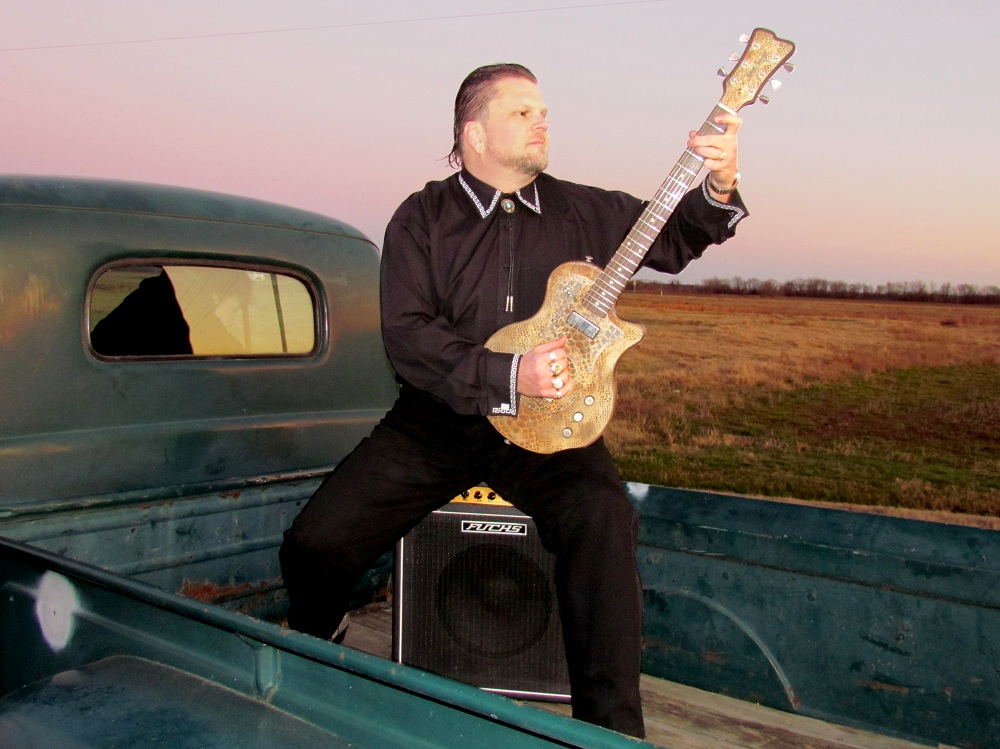 At eleven years old, Guitar Mikey had already established his destined path when sneaking back stage to meet slide guitar mentor, Muddy Waters. At the age of twelve he began playing in local rock bands and at sixteen, began fronting the critically acclaimed - award winning Steel City Blues Band. Later, this band would feature, and then back Canada’s King Biscuit Boy. Over the years Mikey has been seen from Toronto to Buffalo, Chicago, to Boston, and now in his new home of Clarksdale, Mississippi sharing the stage with the likes of Honeyboy Edwards, Yank Rachel, Buddy Guy, Otis Rush, Billy Branch, Carl Withersby, Long John Baldry and Paul Butterfield. Many Hamilton fans remember the years of Mikey's regular Sunday night where he helped build the popularity of Hess Village's club, The Gown & Gavel.  Here Guitar Mikey would regularly have musicians sit in like Carey Bell, Phil Guy, Eddie Kirkland, Eddie Shaw, Luther Tucker, Don Walsh to name a few. Most recently he has reached his final destination, Clarksdale Mississippi. This is where he will continue playing the music he loves, in the place it was born. "Out Of The Box" is Guitar Mikey's self produced in Earwig

Mike, when was your first desire to become involved in the blues & who were your first idols?
At age 5 I loved Trini Lopez’s version of Kansas City and my earliest idols were Sonny and Brownie, Muddy and Johnny Winter. 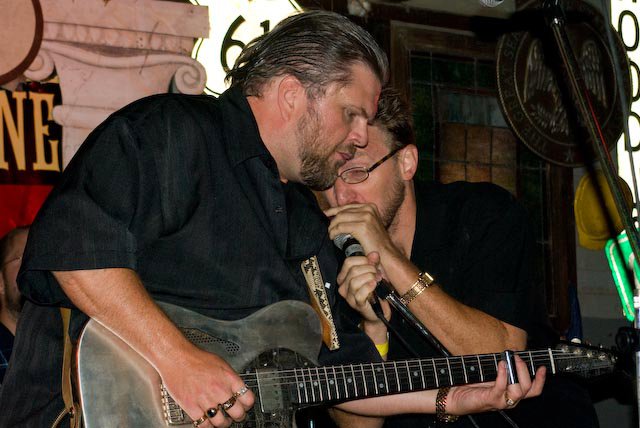 What does the BLUES mean to you & what does Blues offered you?
It is just part of me and cannot describe its meaning.  It is like “What do your arms mean to you”?

What experiences in your life make you a GOOD bluesman and songwriter?
I doubt my experience is different than anyone else.  Blues is just my way to express myself – like some might become athletes.

Do you remember anything funny or interesting from the recording time?
The one most remarkable thing is when I brought Alphonso into the studio to lay down his part in “When Leo Starts To Growlin’” the horns had been completed he had not heard them prior to or during his performance.  It was amazing how his parts

What are some of the most memorable gigs and jams you've had?
Playing with Buddy Guy at the opening of Legends. “Out Of The Box” release show in Hamilton, ON. Are there any memories from Hess Village's club, The Gown & Gavel, which you’d like to share with us?
Generally it was always interesting to me as to who might show up covertly at the show, from Carmine Appice to the band Cinderella to friend and actor Graham Greene.

Do you have any amusing tales to tell from your meet with Muddy?
Beyond the fact that my dad couldn’t find this 11 year old kid because he was hanging out with Muddy in the dressing room, I was generally pretty shy about the whole encounter.

Some music styles can be fads but the blues is always with us.  Why do think that is? Give one wish for the BLUES
Blues is the language and everything else is just a dialect, not just in American music either.  Eastern, European and other ethnic styles of music all fall back the core 5 notes of the pentatonic scale.

Which was the best moment of your career and which was the worst?
Best is singing with Earwig. Worst does not know what to do after leaving A&M. 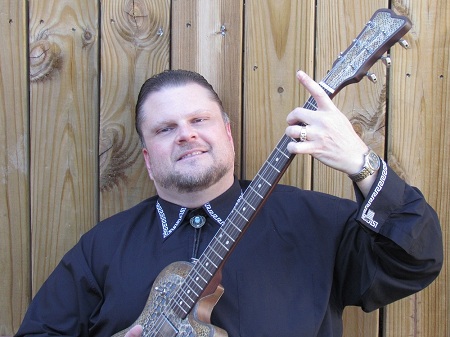 How do you describe Mikey’s blues philosophy?
If it feels right, go for it

What characterizes the sound of Guitar Mikey?
I guess the fusion of music that has evolved out of blues has been re-infused back into the blues, giving it a sometimes more edgier sound without ever losing sight of the roots.

Cool nickname “Guitar Mikey”… and nice quote the "King of the Jungle". How did you come up with it?
For some time I had been performing the Johnny "Guitar" Watson classic "Gangster of Love".  In the song the is a line "Sheriff says Is you Guitar Watson....".  I changed it to "Guitar Mikey" simply to make it fit in the song.  It was beginning to stick.   "King of the Jungle" came from Dave Rubin.  I guess it was inspired by the song “When Leo Starts to Growlin’”.

From whom have you have learned the most secrets about blues music?
Richard Newell aka King Biscuit Boy is the best mentor anyone could hope for.

What are the secrets of slide guitar?
Start early.  I think it is very hard to play well and without thinking about it while you’re doing it. 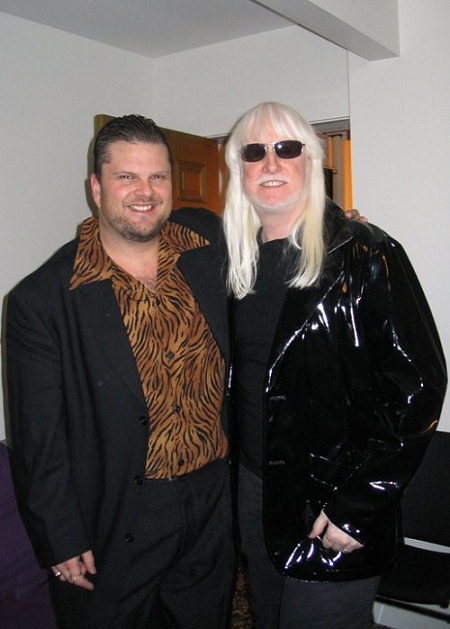 Would you mind telling me your most vivid memory from your experience with The Thunderbirds, John Mayall, and Winters?
T-Bird – The first time we opened for them it was in ’85 I think.  They were on their way up..FAST!  We got a huge reception after hour set.  As we were getting off stage and passing their dressing room, the door partially opened with instruction to get back up and play another song.
Mayall - When on the bill with John Mayall and Buddy Guy there was an opening band that played over time and they didn’t really fit in to the format.  This caused me to have to cut my set short.  Afterwards John Mayall came to my dressing room and apologized stating I should have had played for their time slot as well as mine.  I always thought it one of the most gentlemanly things I had ever witnessed, especially in the music business.
Both Edgar and Johnny – They were such heroes of mine as a kid so I was very nervous and just wanted to do them proud.

What advice would you give to aspiring musicians thinking of pursuing a career in the craft?
Get good at something else besides music.  You can always do both and there is enormous freedom in that.

How would you describe your contact to people when you are on stage? What compliment do you appreciate the most after a gig?
There is an interesting unspoken bond between you and the audience that is inexplicable.  I always like it when folk compliment me in my singing.  I hate my voice and have always done a lot of work to do as much with it as possible. 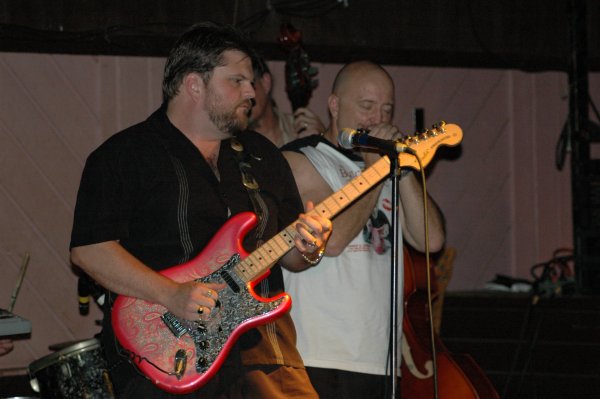 Which memory from Honeyboy Edwards, Yank Rachel, Otis Rush, King Biscuit Boy and Paul Butterfield makes you smile?
Honeyboy Edwards – While Playing a club in Toronto (a not so good area), Honeyboy was doing the sound check and a large rat sat upright in front of him on stage with the appearance of intently listening.  It looked like the darker side of Disney.. LOL
Yank Rachel – How young and stupid I was at 17, not appreciating to the full extent of who I was playing with but more intent on proving to him that I was a real bluesman too.
Otis Rush – How he got me up on stage after everyone told me I would never be able to get up with him or Buddy Guy.  I got get up with Buddy the following year
King Biscuit Boy – While getting promo shots done in the back alleys of Hamilton, a native Canadian approach us for money and with deadpan delivery Rich turned to him and responded “Poo Poo Kayak”.  I still have no idea what it meant but I still laugh about it to this day.
Paul Butterfield – How Butter after hearing me play in a 6 night series of performances that he insisted to the venue that I play another set on his intermission – another unexpected act of generosity.

What a difference and similarity between a blues musician… and bluesman?
Hmmm... maybe about 20 years?

Guitar Mikey and the Real Thing 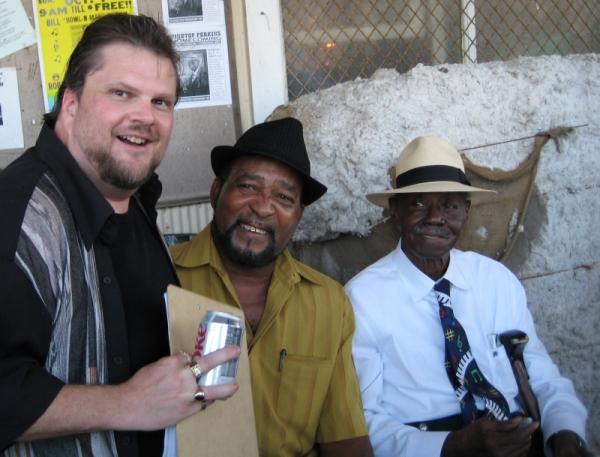