Pete first discovered the blues from listening to local Toronto blues radio shows and quickly began to search out recordings from the masters of Chicago, West Coast, Delta and modern blues.

Pete has a primary interest in the guitar stylings & tones found on electric blues recordings of the early 50's as well as urban Chicago blues from the 60's. A raw and ambient sound that ranges from upbeat and swinging to gritty & lowdown. The most important ingredient of this style of guitar playing and of the music in general is establishing a groove with the "right feel". 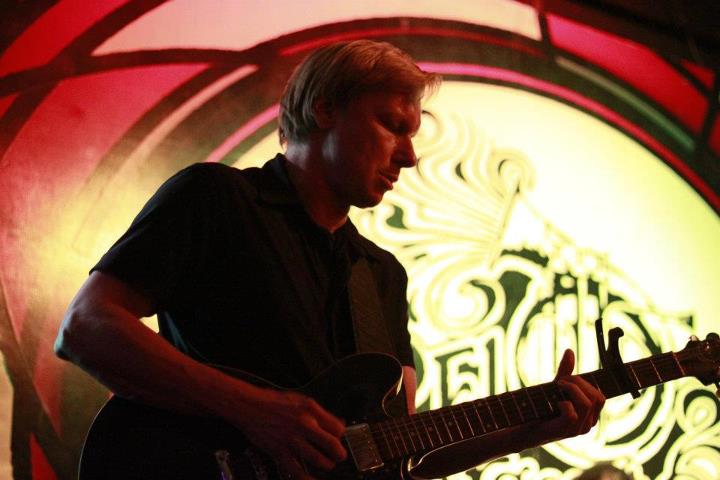 As a sideman, Pete describes his role as a back-up musician to various front men using traditional blues lead and rhythm guitar styles. The main focus is to contribute a guitar style which will help to create a strong "ensemble" sound in order to fit the musical direction & mood of the show.

I first started to be interested in blues after I had been playing guitar for 3-4 years….I started off playing rock and then rock/blues but I was really attracted to the feel, sound and the expressiveness of blues guitar. I also loved the sound of harmonica, vocalists and the great rhythms of the shuffle and jump blues. 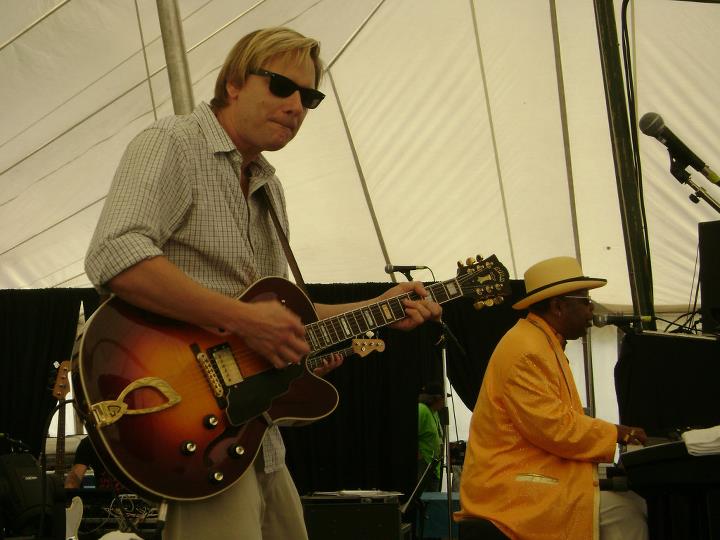 What characterize Pete Schmidt’s sound and progress? How do you describe your music philosophy?

I enjoy playing the various styles (within blues) such as Chicago blues, west coast California sounds as in jump blues…..I love jazz/blues, early rock & roll and funk as well. So I try to inject elements of these styles into the blues. I do like to play for the song…and I believe that the groove of the song is most important. A strong focus on rhythm and melody is essential in my opinion.

I do try to inject a feeling into a song based on a sentiment or recollection of an event or time in life – either the past or present….sometimes this can be happy, sad, humorous and maybe even a little angry. Natural human emotion can be channeled into music….of course, this is difficult and the continuous struggle to express mood and feeling suggests the nature of blues to me.

I play guitar because the trumpet I was playing as a child could not make the sounds that an electric guitar could….I tried but I couldn’t do it – so I switched to guitar!

I first started to be interested in blues like many others, when I heard Jimi Hendrix “Red House” and songs of Eric Clapton. I started to play blues after hearing (and then seeing) Stevie Ray in concert in a small theater in Toronto. I also remember watching the original live TV broadcast of SRV At The El Mocambo club in Toronto…wow – that was great! 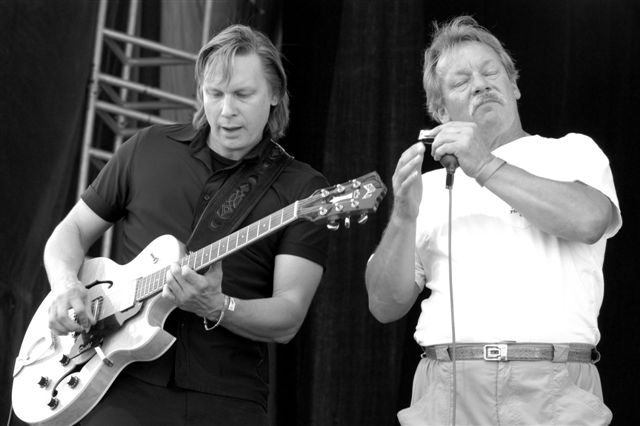 Photo by Eddie B.

What are some of the most memorable tales with Donnie “Mr Downchild” Walsh?

I enjoy playing with Donnie (and the other members of Downchild blues band)……in fact I will probably see Donnie at a blues festival in mid Sept. -  a few years ago in Mt Tremblant Quebec at the blues festival – we had a trio show in a bar for the evening….Donnie was at the bar having some drinks…..it was funny how he quietly asked if we wouldn’t mind if he sat in with us….he said he was bored drinking at the bar and felt like singing, playing guitar & harmonica – it’s a better use of time – he said – and so he did . Ask and you shall receive describes that day perfectly.

The best moment is that moment when there is a natural & flowing connection to the music – whether solo or with a band…they happen every so often…..they continue to be a great motivator - I can say I will have a best moment again! The worst moment happened when I decided to stop playing – for 7 years!  This happened before I started playing blues…. I had been playing rock music for several years and felt it best to move on to other things……what was I thinking? hahahaha 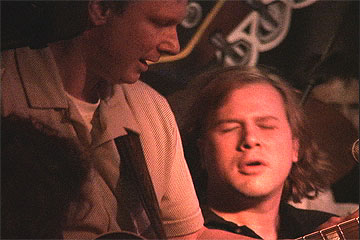 Unbelievable musician, he had a bar named Healey’s….many musicians would go there and watch his shows and the frequent jams, guest musicians etc. I remember doing a guitar seminar at his bar – there were 4 other players also doing the seminar…..we had a great final jam – with all of us playing the same long jam/song with our very different styles…..I wish this jam would appear on YouTube!

I did play with Henry Butler at a blues festival in the province of PEI. I remember hoping that he would select songs that we could even just follow or understand - he is an incredible musician!

What advice Mel Brown has given to you, what was your relationship & which memory from makes you smile?

Mel was one of my greatest influences on guitar and blues in general……he was a fantastic musician and a real gentleman. I had the pleasure of playing, recording with him many times. He would always say regarding recording imperfections (some call them errors) “that’s the way I sounded at that minute on that day”…..and that’s it! Such a great way to say musical perfection and perfectionism in general don’t serve the music well and are not what it’s about.

Would you mind telling me your most vivid memory from your trip in Cuba and jamming with local musicians?

Music is a way of life in Cuba….many musicians and so much music. To jam with Cubans is a very social occasion….you can become lifelong friends over a progression and some great Cuban rum J 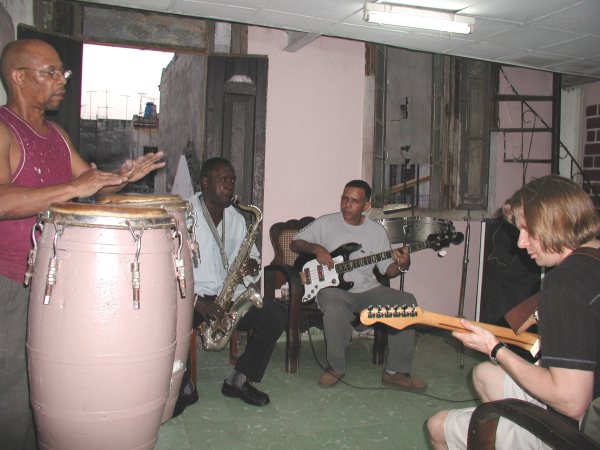 Tell me a few things about the Ultimate Jam tracks, how that came about?

When I was a kid playing guitar I used to make my own very crude backing tracks with a tape recorder. I dreamed of having tracks in the way I understand and enjoy music. So myself & Shane Scott (who owns a studio) made these tracks the way we wanted to hear them….assuming that others would find this beneficial for practicing and learning blues. I’m happy to say that blues jamming never goes out of style!

Many festivals and jams over the years…but playing in a small but full pub or bar very close to the audience that really appreciates the music has got to be some of the best types of shows for me.

Well, maybe right now is an interesting time! hahaha; but I do have really fond memories of summers spent as a teenager – practicing everyday with our band(s) at the time. Everything was new and exciting…we had big dreams (and plans) to become rock stars……that never happened – but it was a special time!

You have interesting store with music accessories handcrafted by artisans in South America. Where did you get that idea?

I have been playing guitar for 30 years now…..music accessories were always something that I had to search out and purchase. My decision (along with my business partner) was to develop a range of the highest quality products we could make. The search for this type of product led me to Peru – where we manufacture the items for export into USA, Canada and Europe. I now spend much of my time here in Peru. 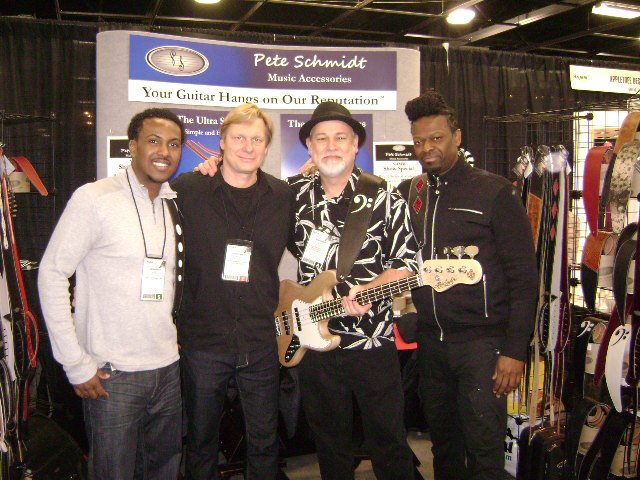 Blues is the foundation for many styles of Western music…for this reason it is still with us – it is found in most styles of popular music as a root influence.

I hope young people give blues a chance – choose to listen to it and support live music.

Enjoy today first and foremost rather than dreaming too much about the future and listen to what you want to play…..develop an ear for the music from a genuine interest rather than an overall technical approach – especially with regards to roots music.

What would you ask of Howlin' Wolf? How you would spend a day with Jimmy Reed?

What is the “feel” you miss most nowadays from the electric blues recordings of the early 50's as well as urban Chicago blues from the 60's?

The sound of a shuffle from Jimmy Reed & Eddie Taylor...so loose and natural….just pure groove.  It’s so simple sounding but difficult to find that sound and feel. Also, the swing feel and jazz influence in the blues of T Bone Walker from the 50’s 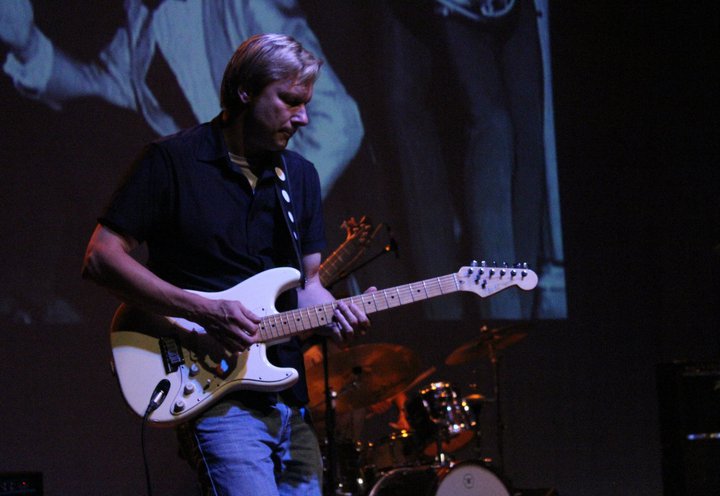