Chicagoan blues singer Inetta Visor of Mississippi Heat talks about the past, present and future of Blues

"The one thing that I've always wanted to do is give new life to the blues, with experimenting with new things. Giving it a new feel so we can really reach this new generation."

Inetta Visor was born on the South Side of Chicago. Apparently Inetta was a natural, and she was selected to sing with this choir. She sang her first professional gig with them in 1971, and continued to hone her singing skills on and off the stage whenever she could, as she continued to work as a radio engineer to pay the bills. In 1979 she began to sing with a Rhythm and Blues choir The Whole Truth.

In 1984, Inetta left TWT and put together her own choir Sisters With Voices. Not soon after putting out an ad for her choir, she received a phone call from Marc Pulido interested in her services for the band Skyline, and he offered them to work with him. Inetta optimistically took this offer and sang back-up until this band disbanded in 1986. Later, Marc Pulido was now with a band named Tainted Blue and Inetta joined that band as a back-up singer, and a few months later was their lead singer. She sang with the band until they broke up in 1997. 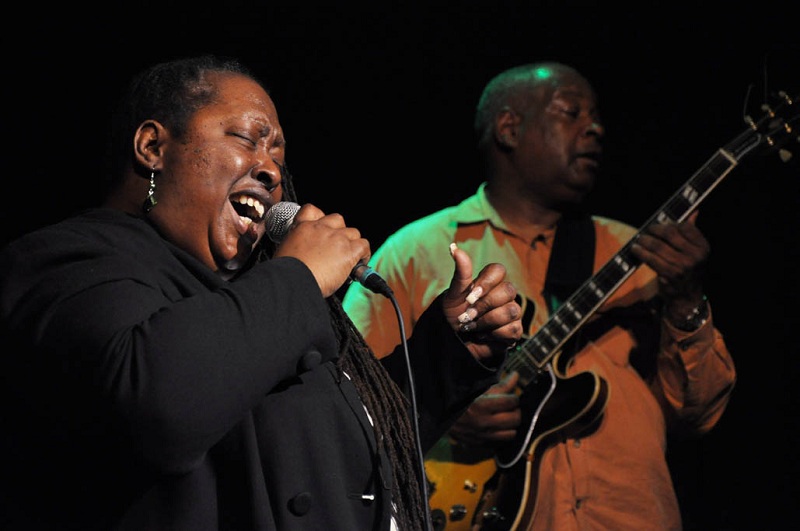 Inetta then took work with the Illinois Student Assistance Program in 1989 for more stability as she continued to press her musical career. In 2000 she was recommended by longtime acquaintance Theresa Davis to well-established Chicago Blues band Mississippi Heat. Theresa Davis, who had sung for the Emotions, had recommended Inetta, as she herself did not see blues as her musical form, and therefore did not see the Heat as an ideal match for her. Mississippi Heat at this point were looking for a replacement for their then singer Katherine Davis leaving the band to promote her new Jazz CD. Inetta auditioned for them at Koko Taylor's club on Wabash.

In 2001 Inetta decided to give Michel Lacocque (Pierre's brother and band manager) a call to offer her services to Mississippi Heat once again and she joined the band. Inetta, won in 2003 the Best Blues Singer competition at the House Of Blues (Chicago).

The blues for me has always meant empowerment. When the singer sings about their circumstances, be it heartache about a lover or their living situation, it's almost about a confession or a cleanse of the soul.

What experiences in your life make you a GOOD blueswoman, performer and singer?

I think it's the drive that I've always had to do music. The Blues is an excellent vehicle because people love to hear a good story that they can related to. As far as being a performer and singer, it's definitely hard work but fun 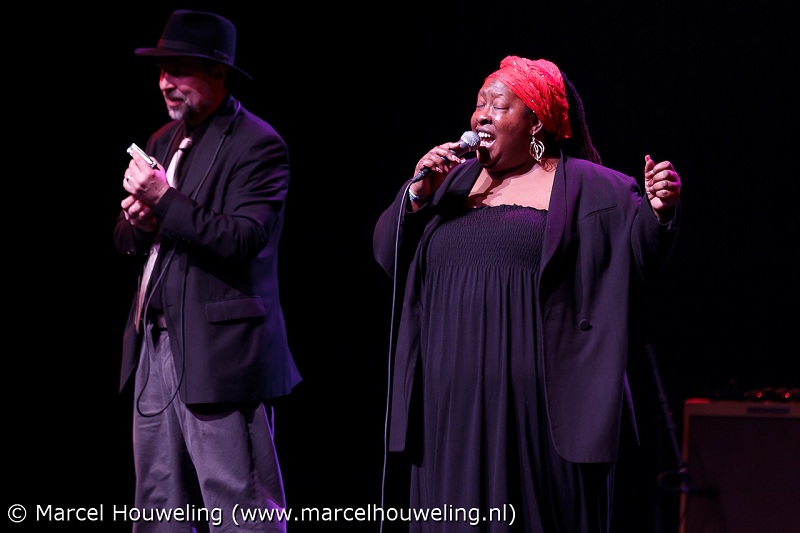 How do you describe Inetta Visor sound and progress and what characterize your music philosophy?

Blues is an art form that I would like to help keep alive. Like I said, it's was our only therapy during hard times. Getting our feelings out, kept us sane. I believe that!

No one in particular. But I do love Denise LaSalle, for her storyteller style.

When a show goes over well, I consider those shows the best moments of my career. The worst was in 2002, when my father passed away and I lost my voice for the Montreal Jazz Festival. It was my first time ever being there. I was crushed.

What is the “feel” you miss most nowadays from the OLD DAYS OF CHICAGO BLUES?

To be honest, I don't miss the feel of the Old Days of Chicago Blues. The one thing that I've always wanted to do is give new life to the blues, with experimenting with new things.  Giving it a new feel so we can really reach this new generation.

These past ten years have been very rewarding for me. I thought my musical career was never going to get past these holes in the wall places. I'm visiting placing that I'd never thought I'd see and meeting people that I never thought I'd meet. 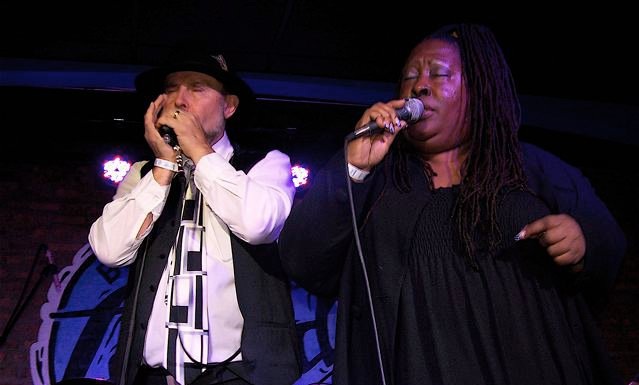 Pierre Lacocque and Inetta at Buddy Guy's Legends in Chicago

Don't quit your day job!  I know there are those who will disagree but the music business is a fickle business. Some months, you will have a lot of jobs, some months, you won't. If you can find a job that's flexible, that's great. I worked a job and did music for thirty years, I kid you not. Now that I'm not working, sometimes I wonder how I did it and didn't pass out from lack of sleep. I dated musicians who refused to work because they wanted to be available for anything that came up. I got more calls than they did.  That's why a lot of musicians are looking for someone they can move in on.  I'm not ever going for it because I worked and still did my music. I always had a roof over my head and a car to drive!  LOL!

The second thing is to be respectful to the musicians. Be on time. Come prepared with your music. Know the keys to the songs. Know the words. If you have an arrangement you want to try, be able to communicate without being rude and show the musicians what you want without being too much of a diva. Be professional on stage.  Sometimes things go wrong. Play if off and keep going! Don't make it a habit of embarrassing musicians and the sound engineer on stage. Wait until break or after the show in private. Be respectful of yourself. Act like a lady. As the old saying goes "You can catch more flies with honey".  When word gets around that's you're easy to work with you'll get a lot calls.

Tell me a few things about your meet with MISSISSIPPI HEAT, which memory from the band makes you smile?

One of my fondest memories is when we did the Blues Festival in Cahors. I can't remember the year right now but we had so much trouble trying to get there. There was a storm, which damaged the plane. We were on the runways for hours, with angry passenger, who just couldn't see that we were blessed not to be taking off. We missed our flight in Paris and had to wait nine hours for the next flight, at a boring airport that had nothing to do it and sit on uncomfortable seats. When we got there we had to go straight to the gig and on stage. 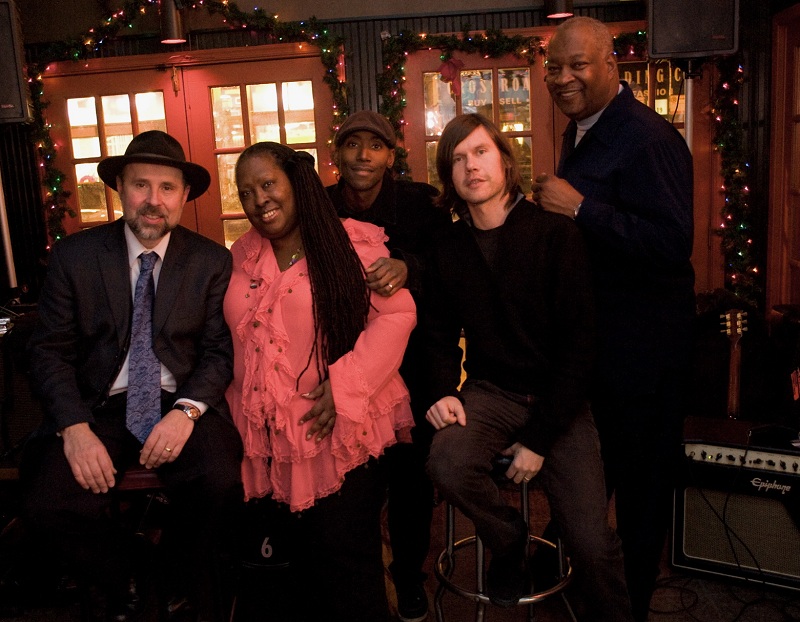 I do believe in the existence of real blues today. I'm part of that new blues. I believe and feel what I'm singing. To me there's nothing wrong with change. Some changes should be embraced. For the old timers to diss and complain is sad to me.  I heard a DJ, here in Chicago; dismiss the blues that is being made today. The Blues is a feeling. Must we compare and label everything?

I don't believe so.

I don't have too many memories of Maxwell Street as far as the blues goes. I attended two blues jams, in one of the parking lots but I was young and into straight R&B. It was a good time though!

That's a tough one! There's a picture I've always liked of Aretha Franklin, dressed up and sitting on some luggage, ready to go. I'd like a painting of me like that. 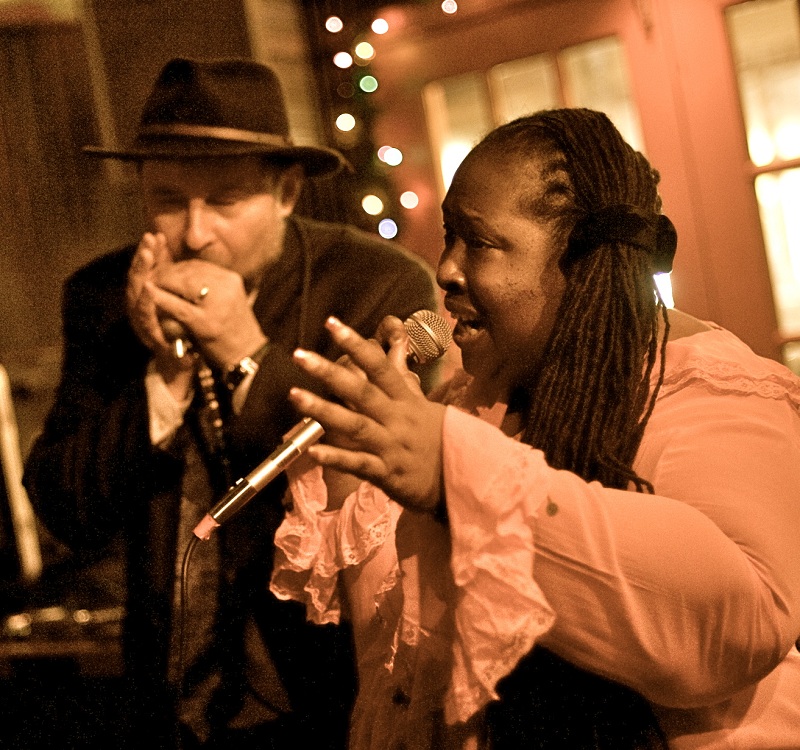