As an adolescent and young teen in Dallas, Texas in the late1950's, Denny Freeman heard on the radio the radical new sounds of people like Little Richard, Fats Domino, Ray Charles, and Chicago and Louisianna blues artists like Muddy waters and Slim Harpo. Freeman would go to concerts that featured folks like Jimmy Reed, Bo Diddley, Ruth Brown, and the Clovers. In the 60's there was Jimi Hendrix and Cream, and the wonderful jazz of the time. All of it contributed to the music that Freeman would come to play. Primarily a guitar player, he has played piano and organ on his own and other folks records and gigs over the years. His piano playing also appears on James Cotton and Jimmie Vaughan albums. He toured on Jimmie Vaughan's first solo outing as the piano player.

Denny has been the main writer on the songs on his four, mostly instrumental albums, and teamed up with Kathy Valentine of the GoGos and Clem Burke of Blondie, to submit music to Deborah Harry for the Blondie "No Exit" album. Deborah wrote the lyrics, and "Boom Boom in the Zoom Zoom Room" was born. He also co-wrote "BaBoom (Mama Said)" with Jimmie and Stevie Vaughan for the Vaughan Brothers' "Family Style" album. 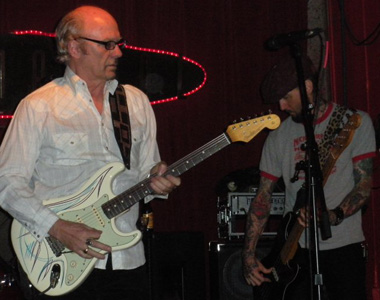 After touring for a year and a half with Jimmie Vaughan in the mid nineties, he toured w/ Taj Mahal and the Phantom Blues Band until late 2002, playing guitar. It was during this period that Taj' Grammy winning CD, "Shoutin' in Key" was released. After growing up in Dallas, going to college in north Texas, and a brief sojourn in L.A., Freeman moved to Austin, Texas in 1970. Jimmie Vaughan, Doyle Bramhall, and Stevie Vaughan soon followed. If you were a musician, a part of the sub culture, or just had long hair, Austin was the place to be in that part of the world, at that time. It wasn't so much of a music town, Freeman observes. " It was the kind of place that musicians in the early 70's found hospitable. Lots of pretty girls, cheap rent, a laid back atmosphere, those things were especially helpful, in those days." The word got around and musicians are still moving there, today, although things have changed, like everywhere else, and cheap rent is certainly a thing of the past. The main thing, though, that these folks had in common, was that they came ready to play blues.

In 1975, the world famous Antones Night Club opened up. At first, the T Birds were the house band, providing backing for the famous Chicago, and other, blues artists that were booked. In the early 80's, another house band was formed, and Freeman had guitar and piano duties, backing up blues giants like Otis Rush, Albert Collins, Buddy Guy, Jr. Wells, Jimmy Rogers, Eddie Taylor, Lazy Lester, and many, many more.

In spite of Freeman's work with Austin blues bands and blues artists in L.A., where he lived from1992 until late 2004, he doesn't consider himself a "blues guy".

Denny played in the Bob Dylan Band from 2005 until August 2009, and plays on the Bob Dylan album, "Modern Times". Since the autumn of 2009, Denny has been playing in Austin, Texas a lot, mostly at the Continental Club, Antones, and The Gallery, and in DFW area clubs, and is preparing to record. 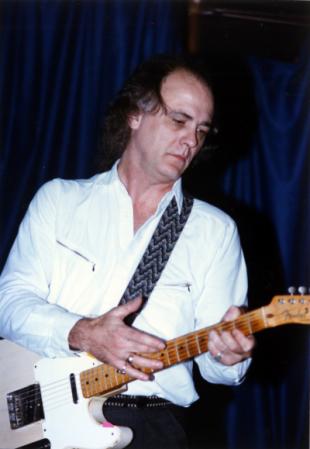 Mr. Freeman, when was your first desire to become involved in the blues?

Ιf you mean trying to play blues, i guess it was in high school, but we didn't think of our bands, back then, as "blues bands". Blues was part of our rock and roll, in the early 60's.We played songs from the radio, and Chuck Berry, and whatever was going on, and in Dallas, blues was part of the landscape, even for young white kids. I had several obstacles in my life, keeping me from living as a musician, until my mid 20's, when Jimmie Vaughan, and Doyle Bramhall, Sr., and I and a few others moved to Austin, from Dallas. We had been into the music of the mid and late 60's, but by 1970, we decided that we wanted to play blues, in spite of the fact that there was very little interest. Not no interest, but not much, interest, in blues. It was now pretty much out of fashion. Johnny Winter was doing it and getting away with it. A few others.

My first idols were Elvis Presley, Little Richard, Fats Domino, Ray Charles, Chuck Berry and blues artists on Chess, VeeJay, Excello Records. They were my idols and my influences.

Which artists have you worked with? Which of the people you have worked with do you consider the best, like a friend?

I've worked w/ a lot artists, probably too many to list, but some only briefly. In Austin, at Antone's Night Club in the 80's, I was in ouir house band, and we backed up many legitimate blues artisits, too many to remember/ list. Lazy Lester, Otis Rush, Buddy Guy, Jr. Wells, Johnny Littlejohn, Little Johnny Taylor, Ted Taylor, Eddie Taylor. I worked w/ Jimmie and Stevie Vaughan. Toured w/ Jimmie, Taj Mahal, Bob Dylan. I'd think that most of my "friends", were the more obscure folks. 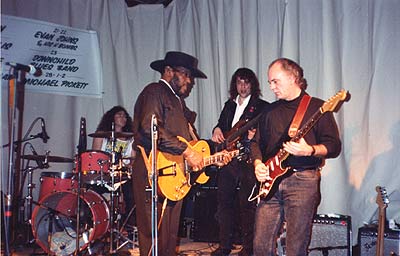 Getting the Bob Dylan gig. Having Blondie do a song I co-wrote. Percy Sledge recording another…Recording Modern Times wasn't a "moment", but was a high point. When it was all over. A few bad moments, don't want to think about them..

Maybe Barney Kessell, Kenny Burrell. But I never wanted to "Be", anyone else.

Haven't been to Greece, don't know anyone there. Would love to come, meet folks, see your fascinating country. I would want Greeks to like our/ my music. Not sure, culturally, if it'd work, though.. 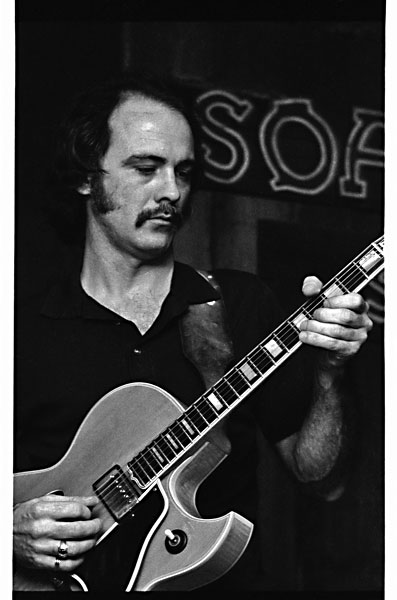 It's just a very inspiring form of music. It's not for everyone, but I think musicians, especially, should have some familiarity, w/ it. Playing it well is very difficult, but one can learn a lot about music, and about one's self, by learning about it.

Some obviously are, most are not.

An approach to playing, understanding music, that is vital, for me.

It's fun. Difficult to play well, a challenge, but fun, when playing it w/ qualified players.

Getting inspired by something/ someone.

Too much reliance on technology. 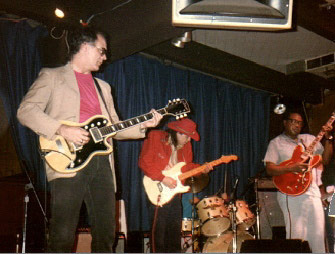 To get more real, less technology

I don't seem to have much free time, right now. I like to visit w/ my ex's daughter. She's awesome.. 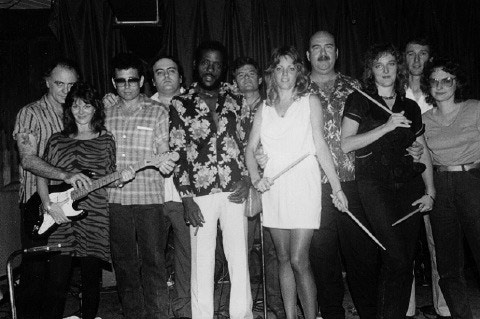 The people that were alive, that have moved on..

Too many to remember

From the musical point of view is there any difference between the north and the south?

In general, the southerners might be more "earthy", but northern folks can be very soulful

What do you think were the reasons for the blues boom in Texas?

Clifford Antone, the Vaughan brothers, and the other folks that came to Austin to play blues. In the 70's, anyway.

Who is considered the "godfather" of the blues in Texas?

Blues doesn't seem to be too healthy right now. 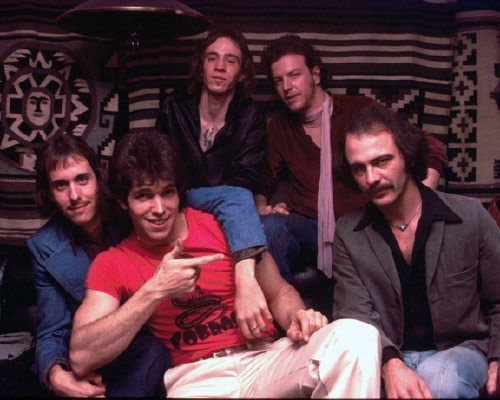 What do you think are the landmark albums for local blues?

T-Birds, "Girls Go Wild". An album is just out, this year, recorded in 1979, by our band, the Cobras... the album, "the Cobras/ Live and Deadly" live at the Armadillo World Headquarters. A moment in Austin Blues, featuring several folks that were in that band. Stevie was in it earlier, but had left the band, and wasn't in town, when we recorded this album.

How was your relationship with the other musicians in Lone Star’s state?

I don't know that many musicians around other parts of the state. Texas is very big.

I wonder if you could tell me a few things about the story of Taj Mahal’s Live recording & Tour.

The only Taj album I played on, was a live album, in Los Angeles. It won a Grammy.

I toured w/ his band, the Phantom Blues Band, for 6 or 7 years, something like that. Around America, Western Europe, Tokyo...just a normal touring situation…hotels, sound checks...

How was your recording hours with Vaughan Bros at “Family Style”?

I didn't participate in the sessions for that. I went in one night, to help Jimmie finish writing Baboom  / Mama Said... 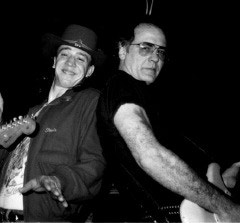 What kind of a guy was Stevie Ray?

He was very sweet, funny. Was my friend. I miss him a lot.

How is your relationship with Jimmie Vaughan?

I don't see him too much.

Let’s go back even further. What do you like about your very first sessions with James Cotton?

I only recorded w/ him on one album that I remember. I think I only played piano. Hubert Sumlin, our friend, was there. Was an honor, but maybe I didn't play so well…

I haven't written many lyrics, but they'd all be personal. 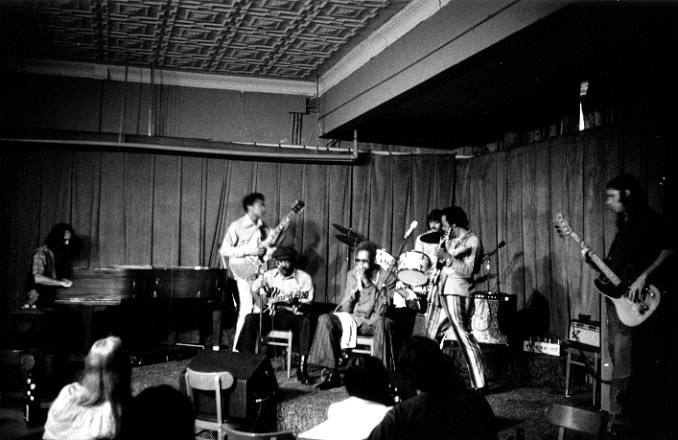