"The music is so elemental (blues and blues based rock ‘n’ roll) that no matter how far popular music gets away from the roots,  a guy or girl with a guitar playing and singing, the desire for that fundamental connection will never die."

Scott D. Rosenbaum is an independent writer/director/producer based in New York. He founded Red Hawk Films in 2006. He is a graduate of The George Washington University with a B.A. in Journalism. After college Scott returned to New York where he worked several jobs while studying screenwriting and directing at various New York City workshops. This included an opportunity to study under legendary stage director Gene Frankel at his lower Manhattan Theater, a relationship that would last until Frankel’s death. Subsequently he studied with Lenore DeKoven of Columbia University Film School, NYU Professor Adrienne Weiss, who produced Scott’s first film, the short, Coda and Bill Balzac of the Lee Strasberg Theater and Film Institute. In 2002, Scott began writing and developing the story and screenplay for The Perfect Age of Rock ‘n’ Roll, which ultimately became his feature film debut.                (Photo: Scott D. Rosenbaum © Red Hawk Films, 2014) 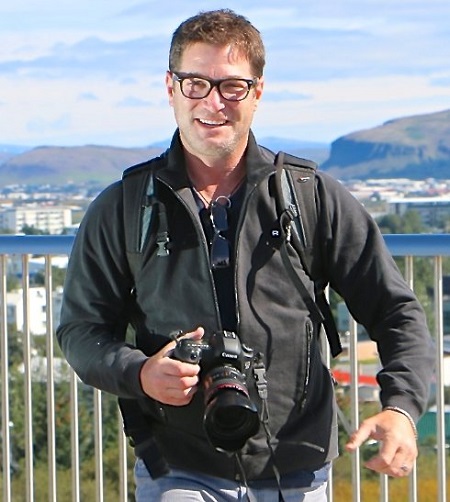 In 2007, Scott met Oscar nominated director Spike Lee who, after reading a draft of The Perfect Age, and viewing Coda, invited Rosenbaum to apprentice with him during the filming of his World War II epic, Miracle at St. Anna. This experience took him to Rome and Tuscany where Miracle was filmed on location. After returning to New York, he finalized rewrites on Perfect Age with writing partner Jasin Cadic. The Perfect Age of Rock ‘n’ Roll, released in 2011 stars Kevin Zegers, Lukas Haas, Jason Ritter, Taryn Manning and the iconic Peter Fonda. Scott is currently in post-production for the feature length documentary film, Sidemen – Long Road To Glory which explores the lives and legacies of some of the last original Chicago and Delta bluesmen; Pinetop Perkins, Hubert Sumlin and Willie "Big Eyes" Smith were all sidemen in the great Howlin’ Wolf and Muddy Waters bands. In addition to capturing iconic live performances and some of the last interviews with these legends, Sidemen features interviews with members of Allman Brothers, Dave Matthews Band, Aerosmith, Paul Butterfield Blues Band, The Doors and artists such as Bonnie Raitt, Kenny Wayne Sheppard, Shemekia Copeland and Joe Bonamassa. Additionally, Scott has written several feature screenplays that are in various stages of development and will serve as his narrative feature follow-up to The Perfect Age of Rock ‘n’ Roll. He has also written, produced, directed and shot live events, commercial and corporate spots for a diverse array of clients that include Marc Anthony, Joan Jett, Paramount Pictures, Hopsteiner and Merrill Lynch.

There is a freedom to all music. Among all the different types of music I listen to, I happen to love rock and blues. I’ve had many bands (I’m a drummer) and the experience of both listening and enjoying as well as playing with other musicians is unlike any other experience I’ve had. The freedom that is inherent in the blues and by extension is what I think attracts everyone to the music whether they know it or not. The music comes from a very human, organic place. It’s just in the DNA.

How started the thought of Sidemen – Long Road To Glory? What characterize your work philosophy and mission? 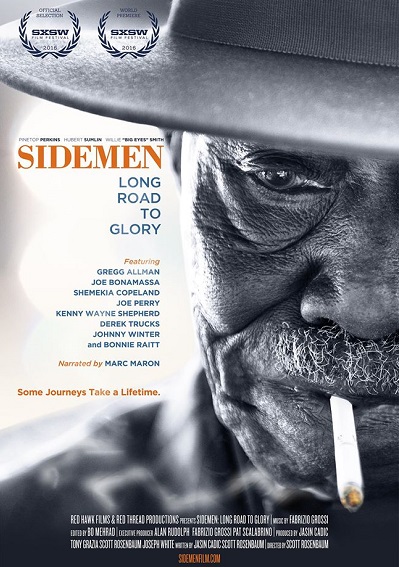 After being exposed to the Martin Scorsese documentary, The Last Waltz, as a young kid; I fell in love with Muddy Waters. That experience also made me aware of the fact that Mannish Boy wasn’t a Rolling Stones song. From there the realization that all of my other favorite bands were playing blues covers too caused me to explore.  A lifetime of discovering the blues and the roots of rock always fascinated me. That fascination got channeled into my first film, The Perfect Age of Rock ‘n’ Roll. I subsequently cast, Pinetop Perkins, Hubert Sumlin and Willie “Big Eyes” Smith in a cameo role. Meeting these blues legends in person…, you can’t help but fall in love with them instantly. And I did. Listening to all these first hand accounts of Muddy, Wolf, Robert Johnson, John Lee Hooker et. Al sparked the idea of doing a Last Waltz style film, only with these blues musicians as “The Band”.  We set out to do that and got part of the way there, but in 2011, as you likely know, all three men passed away and I needed to make a very different film from the one I set out to make.

Why did you think that the Blues and Rock n’ Roll music continues to generate such a devoted following?

As with my answer above, the music is so elemental (blues and blues based rock ‘n’ roll) that no matter how far popular music gets away from the roots,  a guy or girl with a guitar playing and singing, the desire for that fundamental connection will never die. And moreover, it will always be a part of the foundation of any form of good pop music no matter how mechanized.

As it pertains to the making of this film, having the opportunity to spend a few years touring and filming these wonderful elder statesmen of the blues, gave me countless memorable experiences. The advice they gave me was unspoken. It was delivered through their actions, their demeanors and their kindness. No matter how hard life can seem at any given moment, the hardships that these men endured from birth right on up until their deaths should give anyone perspective. They were graceful and gentlemanly through and through. "Well since we’re talking about blues, I’d love to go back to the 30’s and follow Robert Johnson and Johnny Shines as they walked all over the deep south and beyond, having adventures, playing music and trying to survive. Those stories seem so fascinating and mythical to me."

How important was music in your life? If you could change one thing in the musical world what would that be?

Music was always very important to me from as far back as I can remember. I was so taken by my dad and my uncle’s record collections. And then, I got my first Beatles records and I was hooked. Music seems to always be on and play a key role in whatever I do.  As for changing the music world, I wouldn’t change a thing. It’s like life, who’s to say what’s fair and not fair, what’s good or bad…, it just is. You take the good with the bad.

What do you miss most nowadays from the Rock n’ Blues of past? What are your hopes and fears for the future of?

There is a notion and a phrase “keeping the blues alive” and while on some level I understand the sentiment, I’m much more optimistic and don’t feel that the music is that fragile. There is a loyal audience around the world for blues and rock that is clearly blues based. In our film we interviewed many of the kids that attend the Pinetop Perkins Fondation’s masterclass / workshop that happens every year in Clarksdale, Mississippi. The event is held on Hospons Plantation, the very place that Pinetop worked the fields over seven decades ago. These kids as young as eight-years-old love the blues…, and can play the hell out of it. I don’t think we are in danger of this art form disappearing.

Are there any memories from Sidemen – Long Road To Glory which you’d like to share with us?

As mentioned above, there were countless incredible moments that I am grateful for having had as a part of the seven-year-long experience that comprises the making of the film. In addition to getting the chance to know these blues legends, I also got the chance to interview many of the blues and rock stars that appear in the film and who have always been musical heroes of mine. But the single memory I would point to was the moment that Hubert called me over to the bandstand, while we were shooting The Perfect Age of Rock n Roll, and he told me that he had a feeling we’d be working together again somehow. I had no idea how right he was, but that moment help solidify my desire to document these great musicians before they were gone. Thankfully we captured that. 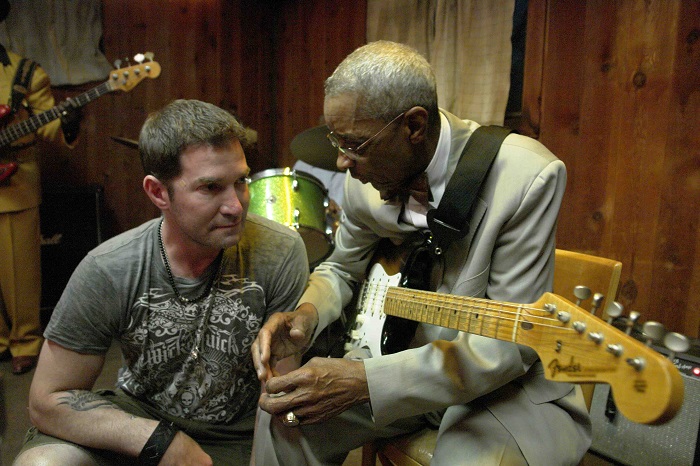 "I hope that as filmmakers we were able to do justice to Pine, Willie and Hubert’s stories, as well as the great legacies they left behind. Chief among that legacy is their kindness and the color blindness they possessed." (Photo: Scott Rosenbaum and the legendary Hubert Sumlin)

What has made you laugh and what touched (emotionally) you from Pinetop, Hubert Sumlin and "Big Eyes" Smith?

Laughing is something we did a lot when we were with Pine, Willie and Hubert. Our aim in making this film was to give audiences the same joy we had while spending time with them. Needless to say the sadness came in abundance when we lost all three men, in 2011, within eight months of each other. The year-long editing process was tough because I relieved so many of those moments over and over again.

I hope that as filmmakers we were able to do justice to Pine, Willie and Hubert’s stories, as well as the great legacies they left behind. Chief among that legacy is their kindness and the color blindness they possessed. No matter how much injustice they suffered over the course of their lives and careers, they held no bitterness and judged every person they met simply by the quality of that individual. The patience and warm-heartedness they possessed engendered so much love and joy that anyone they met couldn’t help but love and revere them. Pine, Willie and Hubert can serve as an example for all of us.

Where would you really want to go via a time machine? What memorabilia (books, records, films) would you put in?

Well since we’re talking about blues, I’d love to go back to the 30’s and follow Robert Johnson and Johnny Shines as they walked all over the deep south and beyond, having adventures, playing music and trying to survive. Those stories seem so fascinating and mythical to me. Given the time and place, when and where those things occurred, it feels like an incredible experience to have been a part of; the good and the bad.