In 2006 Bellevue Cadillac's cd Love Allways was nominated for 7 grammy nominations, best cd, record of the year, song of the year in the pop music category. The Bellevue Cadillac sound, "Jazz, Gospel, Blues and Soul, Swings on top of Rock & Roll" had to have a beginning, and that was 1991.

I think the beginning was Elvis Presley’s first album, it was the birth of rock & roll, which had country, gospel and blues in different amounts and it was the bluesier songs that got to me. Then I searched out Arthur “Big Boy” Crudup and Big Mama Thornton, and a few others. During the later young years, I found Muddy Waters, Mississippi John Hurt, Son House which led to Paul butterflied and BB king and Mike Bloomfield.

I was a huge Bloomfield fan. 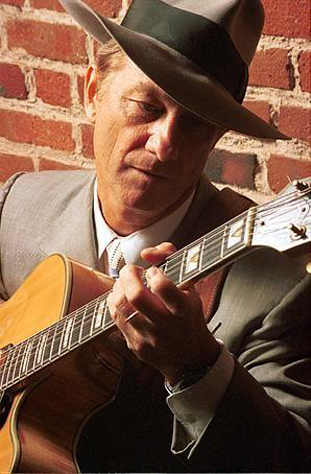 That’s difficult criteria. I most enjoyed the Ray Charles and James brown shows, and Tito Puente I had played with at a jazz festival, the next year he had passed, and we did the tribute on the same stage.

BB king is still the model of professionalism I use today, he is and always will be the ambassador of the blues.

The best moment was meeting Ray Charles, also being in a cover article in Rolling Stone magazine was truly amazing, probably turning down the secret JFK jr. wedding is a low point.

Is there any similarity between the music today and the music of the fifties?

No, I don’t see any similarity at all, except maybe Amy Winehouse, technology has progressed and subject matter differs dramatically from the simple themes of 50s music. I think you can find some blues cds that have a certain roadhouse quality to them, North Mississippi Allstars for example.

Sometimes you can find producers like Rob Fraboni who use the old tube mic’s and preamps to get a retro sound, but music is in a very different place nowadays, for better or worse, who knows?

What do you think were the reasons for the swing boom at the last years?

I’ve noticed that music is pretty cyclical, usually it’s a reconnection to the roots. Swing was the popular dance music before bebop took jazz in a new direction. Rock and roll was amped up blues. The punk scene was becoming more mainstream so the kids were looking for something new/old other than rockabilly.

The dancing in the American clothing company the GAP tv commercial really launched the interest in the music with Louis Prima jump jive and wail, and it was the in thing for one summer. Neoswing was what it was called, Setzer and Royal Crown Revue were already in full…….uh… swing.

It’s a great sound, lots of energy and fun…..something we desperately needed if you weren’t into hip hop. The hype moved on and the better bands are still around, which is great, as i am a fan. Swing will always be around as it always has been, just without so much hoopla.

I am recording with Jay Geils, Gerry Beaudoin and Harry Allen for a cd that is strictly jazz.

I am in the middle of a Doug Bell solo cd that has a more Americana feel to the songwriting and performance, with Prof Louie and some mystery guests, I have a ukulele cd I worked on when in Italy, and a cd with Bud Snyder (Allman Bros producer) I plan in October, and a Bellevue Cadillac greatest hits cd. 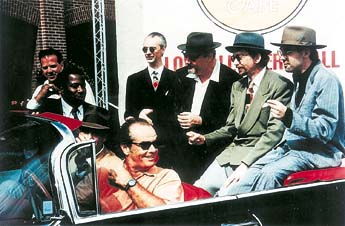 Tell me a few things about your meeting with Jack Nicholson & Bill Murray.

The jack Nicholson, Bill Murray meeting was an accident really. Bellevue Cadillac was hired to open the Hollywood hard rock café, and also do a fundraiser for a childrens hospital.

We were then invited to the charity golf tournament at Sherwood country club, and a friend nabbed a 1960 cadillac convertible and drove around front and put Bellevue Cadillac in it. All the celebrity golf stars wanted to get pics of them in the caddy with the caddy, and we sang acapella while they filmed.

Believe me, when jack came out at the trick of Joe Pesci, we almost fell out of the car!

...and your gig with Ruth Brown?

We did a big wedding on Martha’s Vineyard island for a friend of president Bill Clinton, and Ruth Brown opened the show. She was phenomenal, the real deal r&b singer of all time. She was in fine voice and owned that stage.

The consistant thing we hear from ALL audiences is, “you guys look like you are having sooooo much fun up there” the audience knows if you are phoning it in, they know.

The most interesting period is really right now. I’m working with heroes of mine, I’m playing and recording with just some of the best musicians and producers out there, and I know how to get the songwriting across in ways I just didn’t have at my disposal.

I have learned so much in the last 20 years, and every day I get better (I think) at my craft. 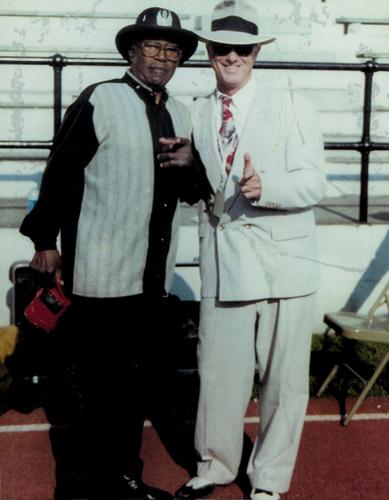 Remember him? He was a really good songwriter……

My next door neighbor’s band the Monarchs, kinda rockabilly, he was my HERO, Harvey Bishop

How was your hours on stage with Keith Richards and Bo Diddley?

I was in the studio with Keith Richards during "Bridges to Babylon". Mick had finished thief in the night, and left for London, everybody was gone but Blondie Chaplan and Bernado.Even don was had left. Just Rob Fraboni, Charles Stockham and me as I remember.

Keith was listening to the playback of thief in the night and asked what I thought. I didn’t like it, it sounded “phoned in” to me, but I was to afraid to say so, it’s the fucking stones for god sake…….and Keith can be prickly!

He pushed, and I just shook my head and said, I don’t feel it Keith…..at which point he jumped up from the board (I thought I was a goner) and ERASED mick’s vocal! He then grabbed me and recorded it himself, with the killer ad lib “you ain’t no fort knox baby”  I loved it. With Bo Diddley, we were on a festival stage doing the show just before Bo, and Bo somehow didn’t have his horns or a keyboard player, so he took mine!! They loved it, I loved Bo.

Shave and a haircut two bits, was the Bo Diddley beat, and he got a lot out of that one beat.

Audiences in China, Japan, Russia, Greece, England, Ireland, and Scotland love American music from what I have experienced first hand. Europe is much more sophisticated as a culture than the states, I don’t care what anybody says, it’s just a fact. The audiences are more loyal, educated and appreciative of an artist and their music. It’s wonderful that American music means so much to other countries and cultures. 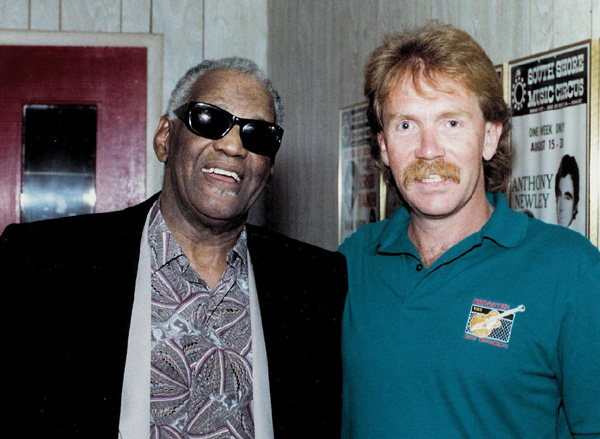 What would you give Ray Charles?

I like surfing, sailing, scuba diving, skiing, and cooking

I imagine it’s important on some level, but not really necessary, as van Morrison is a living testament. 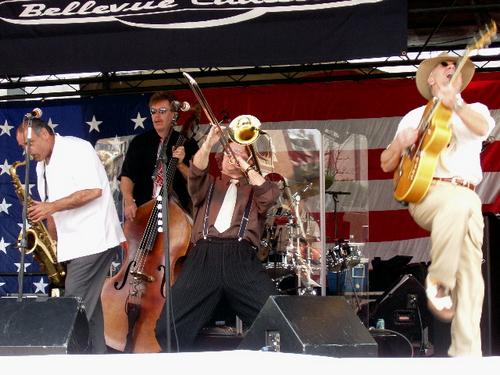 Have you recorded your CD using a more old fashioned sound because you believe that there are no new paths of sound?

We recorded cds using only 2” tape and tube pre amps and mics, and we have also recorded with complete digital pro tools and no tape.

The retro recordings are the earlier ones, they are warmer, and you can hear the cymbals breathe, also, since swing isn’t so popular anymore, it’s really a cost issue, so for that reason and convenience we use the current technology.

What your opinion about reality like “America’s Have Talent”, “American Idol” etc?

It’s a really good way to involve many people in music that otherwise, might not.

I play acoustic guitars and ukulele around the house for my own pleasure, when I’m not rehearsing for a jazz show with Jay Geils or writing

I think it’s a great album “Once in a Blue Moon - Live in Athens”. Do you have a favorite track?

I fell in love with octopus! Not with (an octopus) you have had very difficult times since we left, I believe it was because my horn players ate all your food…..seriously, Greece was one of the greatest experiences of my life, the music, audiences and the Parthenon were beyond imagination. 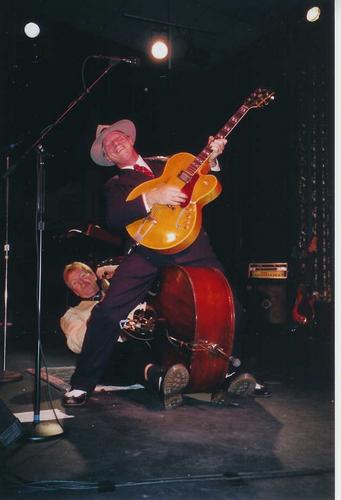 Do you know anything about Greek music?

I’m afraid, not so much, however, your finest bouzouki player was in the audience one night and we met, that was a thrill for me. The whole band really

Yes THANK YOU FROM THE BOTTOM OF OUR HEARTS.

The best audiences I have ever played for around the world!

How much of their old music do they still play?

How did you choose the nickname “Professor”?

The early days I wore bowties and all the young kids said “hey you look like my college professor, not a rock star” and it stuck

They are just terms to let me know what to expect in a very broad genre. Like one of the Marsalis Brothers said, if it’s not rooted in blues and it don’t swing………….it ain’t jazz…..