The first blue moon in 31 years and on that night at the Half Note Jazz Club in Athens Greece, Bellevue Cadillac nails it!! Beginning with solos wailing on the intro 2 Suit Strut, moving from american jazz genres from New Orleans, to Kansas City, Harlem to Bedlam.

"Snake Charmer" opens with a killer hammond b3 solo by Miles Long, shakin' and shimmyin' like a New Orleans cat house, "1 Girl 2 Pretty", the horns set the stage for a Las Vegas night of gambling and sinning with a killer tenor solo by Jimmy 2 Suits Capone (he was Sam Butera's tenorman). 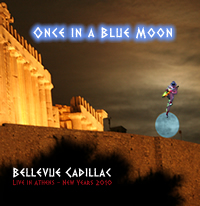 "Guilty" opens with a horn section sounding twice as big as it should due to Bobby Breeze's arrangement with a searing guitar solo and a finale moving up an octave. "Cruisin" a wild Kansas City/motor city groove sing along has the audience singing "turn it up" after the band sings got the "seat back, top down, radio"...... "Ja Ja Opobo" a caribbean piece with flute and trombone and story about a deposed Nigerian king changes pace with a great trombone solo at end. "Perfect Crime" has that pink panther, west side story vibe and another great b3 solo by Miles Long with big ending.

Another change of pace using ukulele and a sing along with the greek audience "Monkey Tune" has them howling in the isles, "Ships" moves the ukulele to France where the story and solos are orchestrated from melodica to clarintet, trombone, trumpet and finally baritone sax (Goose McGrath) moving into the zorba the greek folk dance and the crowd goes wild.

"Summerset" changes the pace yet again with a pastoral and harmonic mood with a song about Woodstock in America and the summer of love, a huge and breathtaking moment in the night with Dimitri Popodopolous on a soaring and majestic trumpet solo, "Blow Wind Blow" a wild conga line breaks out in the house with the cuban/caribbean sing along with the audience singing along on the choruses. Laughing, singing, screaming and conga lining, the audience is in the zone.... all of a sudden we are transported to a cool New York City jazz club with walking bass line by Andy B and a spoken slam poetry 50s beatnik tale unfolds with "Lay Your Money Down" ........the solos are pure NYC hip.......... beginning with guitar disappearing into trombone and finally muted trumpet, suddenly cut time and Goooose McGrath let's loose with an alto sax solo that just plain sears! Standing ovation for the goose......... finally the encore, a New Orleans rave up "Under Your Spell" set's the final moments ablaze with the joyous and infectious basin street strut you only find in the quarter!

This is a VERY special evening in a very special city one you won't soon get out of your head, or player IT IS INDEED ONLY ONCE IN A BLUE MOON! 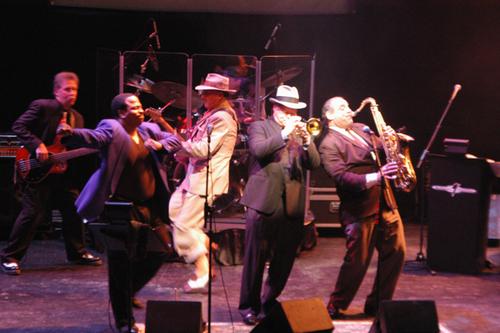