"I think without music things would have been worse and at the same time I wish that music could connect people even more. "

BLu ACiD is Mischa den Haring and Jan Mittendorp, two Dutch musicians and producers joined forces in this new production unit. Both of them have more then 25 years of live stage experience and they combine that with 2015 recording and production techniques. Preserving the power and originality of American roots music but at the same time not excluding influences from any other musical styles. After the successful project with Boo Boo Davis in 2014 BLu ACiD did some other projects. 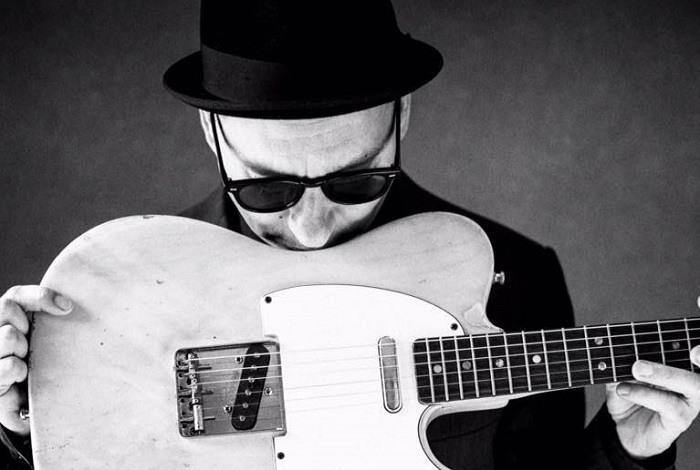 Mischa den Haring is also member of bands: T-99 and The Eminent Stars. Through the years T-99 showed itself as being a constant factor on festivals and stages across Europe and the US. The band also functioned as successful support for Chuck Berry, Dr. John, Los Lobos and Little Feat. In 2008 the band was invited by radio DJ Mark Lamarr to make exclusive recordings at BBC studio's for the radio show 'God's Jukebox'. The Eminent Stars were founded by saxophonist Ben Mendes and drummer Toon Oomen. They both share the love for the great music emerging from cities like New Orleans in the 60's and 70's: Dr. John, Freddie King, The Meters and many more!

What do you learn about yourself from the Rock, Soul n’ Blues culture and what does the blues mean to you?

When I was about 12 the Blues virus got me. It struck me by lightning. It were the grooves and the direct lyrics that moved me. I also listened to a lot of soul, jazz and rock but for some reason the blues always attracted me the most. Later, in my twenties I discovered other genres like country, African music, rockabilly and pop music. To be honest I am not thinking in genres that much, there is only good music and bad music.

What were the reasons that you started the Blues/Rock researches? How do you describe your sound & songbook?

It is still a mystery to me how I got into that kind of music. My parents didn't play it around the house and my friends hardly knew about it. I only had a neighbor who was really into the Stones but it was more the songs that the Stones covered that I found interesting. I was raised in a small village near Groningen in the north of Holland. There were no record stores closeby but we had radio. In those days there were some shows dedicated to blues, jazz and roots on national radio. But they only were broadcasting these shows late at night. I remember laying in bed taping these shows and writing down the names: Howlin’ Wolf, Muddy Waters and Buddy Guy. The next day, first thing I did after school was running to the library to order these records from the catalogue.

I love so much stuff, it would be easier to tell what I don't like. But if I try to categorize the genres that I use in my playing then I would say roots, jazz, soul, rockabilly, rock, gypsy jazz, a touch of punk but most of all the blues. 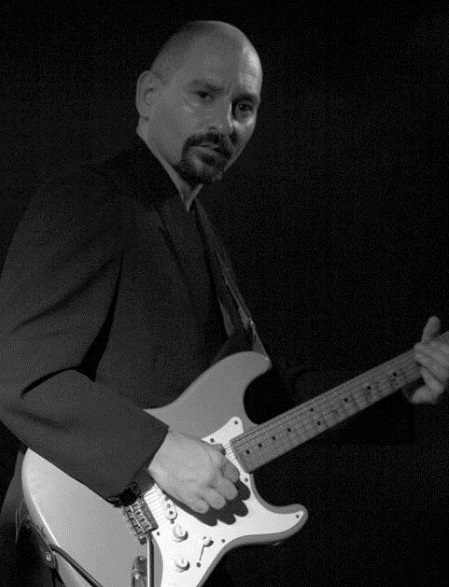 In retrospective there are some guys that really helped me a lot. I have worked with Teddy Morgan, a great guitar player and producer from Nashville who learned me so much regarding songwriting and making sound. But also my dear friend Walter Broes from a band The Seatsniffers taught me a lot about gear and styles. And there was Terry Evans who showed me how to combine craftsmanship and entertainment. And of course there was Boyd Small, a drummer from Portland, Oregon who I toured with a lot. The best advice I got was from Byther Smith. He told me once with an angry look during a show when I was playing too many fills through his vocals: "Am I the front man or are you?" He showed me my place and that was so instructive.

Are there any memories from Byther Smith, Roscoe Chenier, and Long John Hunter which you’d like to share?

I had so much fun touring with these men. There are many stories and anecdotes. One was that we had to travel from the South Of France to the north of Germany and the day after to the north of Norway. This was with Byther Smith and we had to travel by car. When we got to this little town all the way up there in northern Norway it appeared that Byther was the first colored person that ever set foot in that town. People were staring at us as if they saw a ghost. Later we had a huge argument with the promoter, he expected an all American band and refused to pay us. Eventually we convinced him that we were good and we turned that place (musically) upside down. Roscoe was one of the sweetest and purest people I know. He is not with us anymore. I recently learned that Long John Hunter passed away too. That is a shame, he was funny as hell and played with so much passion every night.

Well, you know, times are changing. Instead of being nostalgic about it, I rather look ahead. Art forms shape itself to new circumstances and that is a good thing. Music needs to develop. If not, we still would be listening to Bach and Beethoven only, which is great but there is so much more now. Of course there are moments that I think back about walking into a bar and see R.L. Burnside play for 25 people and I know that it will never will happen again, but that does not make me sad, that feels like a gift. My only concern now is that some promoters are not daring enough. You see many festivals being sold out before the names on the bill are announced. That make promoters lazy and play on safe. It also says something about how audiences value music at the moment of course but still, it would be good to introduce something new, something weird etc. And also major record labels have a huge influence on what will be brought to the stages which is not a good thing. But I have a strong believe that good music will always find their way. Maybe in another form but it will never die.

Free musical instruments for everybody! Haha. No, but here in Holland music lessons are whittled down from schools. And that is a shame. Music is so important for a society, in good and bad times. 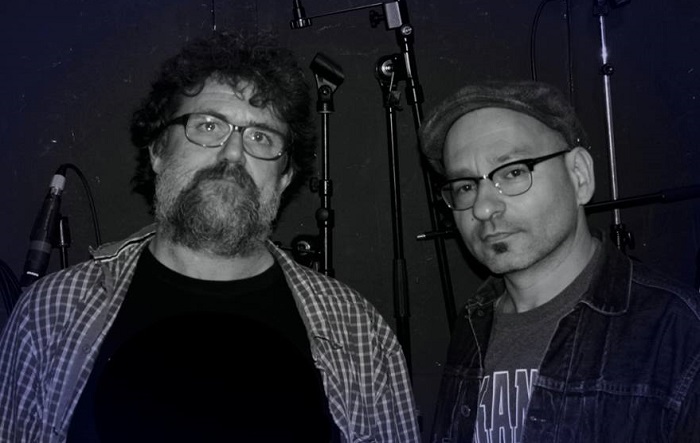 "I love so much stuff, it would be easier to tell what I don't like. But if I try to categorize the genres that I use in my playing then I would say roots, jazz, soul, rockabilly, rock, gypsy jazz, a touch of punk but most of all the blues." (Photo: Mischa den Haring & Jan Mittendorp)

Make an account of the case of Dutch blues scene. Which is the most interesting period in local blues scene?

Well, I was born in the 70-ies so I do not know how it was in the 60-ies but there was a huge blues and rock n roll thing going on in the Netherlands around that time. There were bands like Cuby and The Blizzards, Q65, Living Blues and The Tielman Brothers. In the 90-ies there was a Blues Boom. Many American bands like BB King, The Fabulous T-Birds, Albert Collins, Stevie Ray Vaughan, Albert King etc. came to visit The Netherlands while touring. There were also many great Benelux bands around. I remember the Electric Kings, Mambo Chillum, Drippin' Honey, The Groovetones and many more. And now I sense a new class of artists coming up playing blues, sometimes combined with other roots styles like country, hip hop, soul and punk.

What characterize BLu ACiD philosophy? What touched (emotionally) you and made you laugh from Boo Boo Davis?

With Blu Acid we combine traditional styles with modern beats. Sometimes we ask vocalists to sit in on songs but we also produce instrumental songs where guitars take the lead. Haha, yeah Boo Boo is a fantastic guy. When we were recording we proposed to do something with a very danceable modern beat. Boo Boo started to improvise on the spot and associated the beat with rap music. The bottom line of his lyrics was: "I don't rap, I don't rap". It turned out to be one of the most feel-good songs on the record "What Kind Of Shit Is This?". When production was done Boo Boo told us how much he loved what we did.

What are the lines that connect the Jumping The Blues with T-99 and The Eminent Stars and continue to BLu ACiD?

Oh wow, maybe because I (used to) play in those bands? Haha! Each of the bands are based on traditional rhythm and blues. Some of them developed to an own sound but never hide the love for the music from the past. 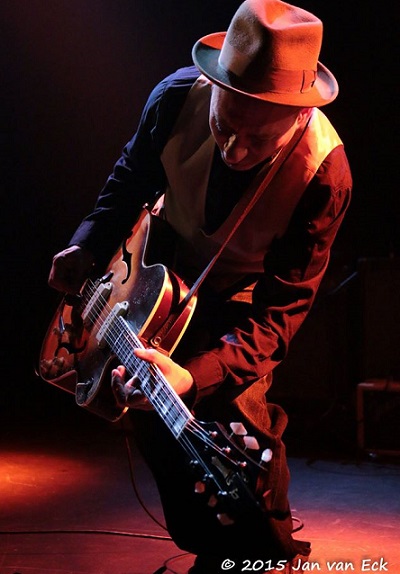 What is the impact of Blues & Soul music and culture to the racial, political and socio-cultural implications?

I think without music things would have been worse and at the same time I wish that music could connect people even more.

"Free musical instruments for everybody! Haha. No, but here in Holland music lessons are whittled down from schools. And that is a shame. Music is so important for a society, in good and bad times."

I would like to go back to the 1930-ies to see Robert Johnson play in a juke joint somewhere in the Mississippi Delta. That would be fun!