"It’s only when I play the blues, with the right musicians of course, that I find my real self."

Playing blues for more than 20 years in Greece and managing to stay “alive” is a hard work. Nevertheless, blues itself had to overcome barriers in order to survive through time. Robert Johnson, Muddy Waters and the rest fathers of blues, inspired many musicians around the planet who dealt with this kind of music.

That is the case of Andreas Gomozias. He is possibly one of the most important Greek guitar players, as he combines blues with other musical styles as R’n’B, soul, rock and jazz. He has been playing guitar since 1980. He was a member of “Blues Family” and in 1993 he formed the blues band “Drifting Around”. What makes him special is his incredible self-taught musical technique and his communicative power as well as his numerous live performances. He has been associated with many Greek musicians and has opened concerts of Peter Green, Snowy White, Mick Taylor, John Mayall, Nine Below Zero, Nazareth, Paul Lamp, and Eric Sardina. Blues Revenge are Andreas Gomozias on guitar/vocals, Tasos Dritsos on bass and Chris Andrianos on drums

In the summer of 2008 along with Tasos Dritsos on bass and Christos Andrianos on drums he formed Blues Revenge. Nowadays Blue Revenge is one of the most important and active blues band of Greek blues scene. Although the band stays close to blues musical tradition, at the same time it also enriches this tradition with elements of other musical forms such as rock, soul and jazz, creating an interesting musical result. Band’s debut CD titled BLUES AIN’T MINOR and released in October 2012. It is the result of a three-hour live recording in the studio with George Kontrafouris on organ.

Andreas: I have played the guitar for 35 years and I have tried many kinds of music looking always for an identity. It’s only when I play the blues, with the right musicians of course, that I find my real self.

Tasos: The musical structure of blues is quite simple, just three basic chords. And yet, with this musical material, you can express everything. That is what I learn from the blues. That with few and simple means, you can do many things. The blues for me is the musical vehicle through which I can express myself better. 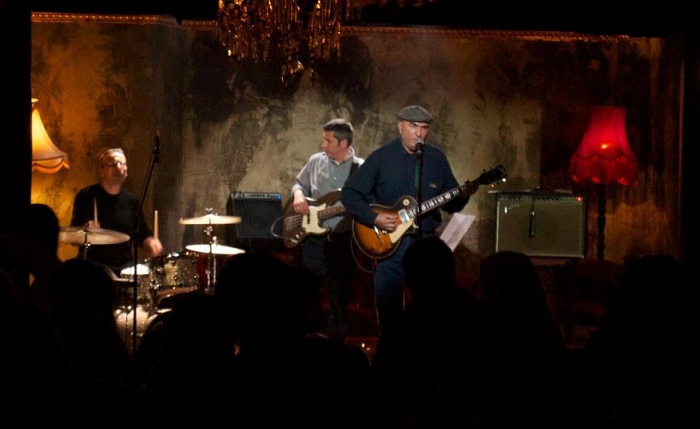 "The blues for me is the musical vehicle through which I can express myself better."

How do you describe Blues Revenge sound and progress, what characterize band’s philosophy?

Tasos: The sound of Blues Revenge is a function of musical experiences that members carry. So it is a mixture of blues enriched with musical influences from Rock and Jazz music. What we are trying to do, is to play openly and with a mood of improvisation, giving great importance to what we call groove, because the groove is the first thing that the listener perceives and it will keep him "tied up" with the band.

Andreas: My most important experience was when I played support in Peter Green’s concert at Rodon Club with my band, “Drifting Around”. The best advice I was ever given was by Dimitris Poulikakos. We were about to play in a concert together, I was not familiar with his music at all and I had no idea what to play. Then Dimitris told me: "Play what you are"

Tasos: I always remember a conference I had attended given by a bass player I particularly admire, Ron Carter. Every time I play I have his words in my mind «Whenever I play, I think about what note will make the other musicians notes sound the best. I'm always listening, and at each moment I want to pick a note that will make the other musicians think. I want to push the music to a higher level. "

Are there any memories from Peter Green, Snowy White, and Mick Taylor which you’d like to share with us?

Andreas: I remember Peter Green looking at the Les Paul I had and smile. He had the '59 Les Paul himself that gave him his characteristic sound.

As for Mick Taylor, he was a very warm man. We played together at the Hi-Hat Club with “Blues Family”. He had the characteristic tone of Les Paul, as well. 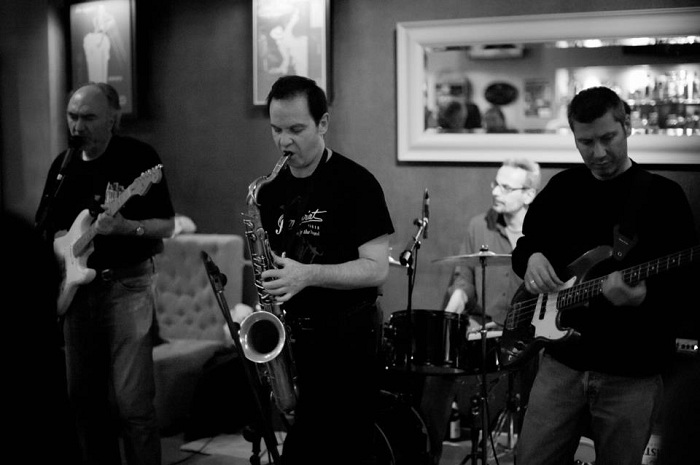 Are there any memories from gigs and jams with the band which you’d like to share with us?

Tasos: There are many beautiful moments during gigs, especially when we perform outside Athens. People who love this music are fond of live concerts and respond more freely.

For us, strictly as musicians, good moments at gigs mean that we have real interaction between us during performance.

Andreas: I miss the sound of the old productions of 30’s, 40’s, 50’s, and 60’s. I'm really looking for something to intrigue me today. A piece of Buddy Guy titled “Who's Gonna Fill Those Shoes” says it all.

Tasos: I miss this deep, rich and natural sound that bands of the 50s and 60s had as we knew it through recordings. But generally I like to see forward. I have hopes for younger musicians who like to play blues but I fear they might get disappointed by current conditions in Greece that make it very difficult for someone to play music with dignity, especially blues.

Andreas: John Mayall - I played support to him at Logo Club in Hamburg along with a local band. Great experience.

Nine Below Zero - Positive energy, but I constantly think of Dr. Feelgood with great Lee Brilleaux. Perhaps the most honest band I've ever seen live.

Eric Sardina - Too much technique! "I have hopes for younger musicians who like to play blues but I fear they might get disappointed by current conditions in Greece that make it very difficult for someone to play music with dignity, especially blues."

Andreas: Many new bands and many talented musicians have arisen. I’ve been playing with “Blues Revenge” (Tasos Dritsos on bass and Chris Andrianos on drums) for the last six years. They are probably the best musicians I've ever worked with. They both used to play Jazz and their previous experience makes our sound to stand out.

Andreas: The first Greek blues band was “Blues United Musicians” with Kostas Saridakis, George Panousis, Loukas Gekas and the singer Papaliosas, a great voice. Later, after the formation of “Blues Family” by Zafiris Tsinalis, George Panousis, Stelios Ladopoulos, Dinos Apostolou and Costas Saridakis I was invited by John Monos to join them. There I learned a lot about the style of blues and that was the most important period for me. However, It did not last long.

Why Greeks are so enamored with the blues? What mistakes from local scene would you wish to correct?

Tasos: There is a small community of people in Greece who loves the blues. Generally, I don’t think Greeks love this music, maybe because they don’t know much about it. Allow me to say that I do not believe that there is a Greek blues scene. What we have is the effort of individual people who love this music. In order to have a blues scene, there should be clubs, media that support this music, audience along with musicians and groups and all these function in a manner that leads to musical production. This of course, I would like to change. 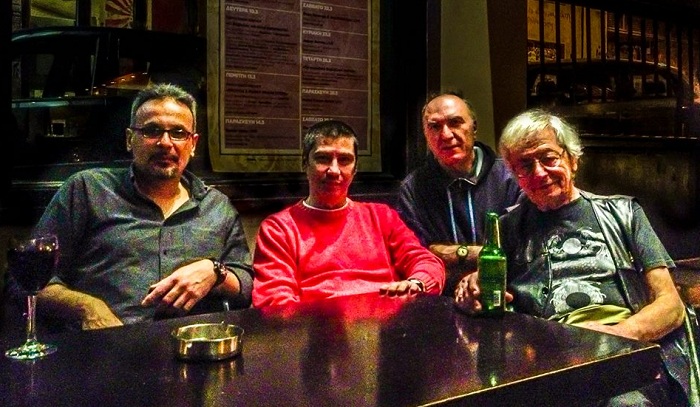 "What we are trying to do, is to play openly and with a mood of improvisation, giving great importance to what we call groove, because the groove is the first thing that the listener perceives and it will keep him 'tied up with the band." (Photo: Blues Revenge with Dimitris Politimos)

Andreas: Because they feel honored to belong to this "club" of people worldwide.

Tasos: For the reason described above. Someone tends to stay close to what is simple, clear and understandable.

Tasos: Unfortunately, I do not laugh a lot lately. But what really touches me is that people, who love the blues and especially musicians, do not give up despite the difficult conditions they face daily.

Andreas: I would really like to go in Chess studios in Chicago and Stax in Memphis. Just for the atmosphere. 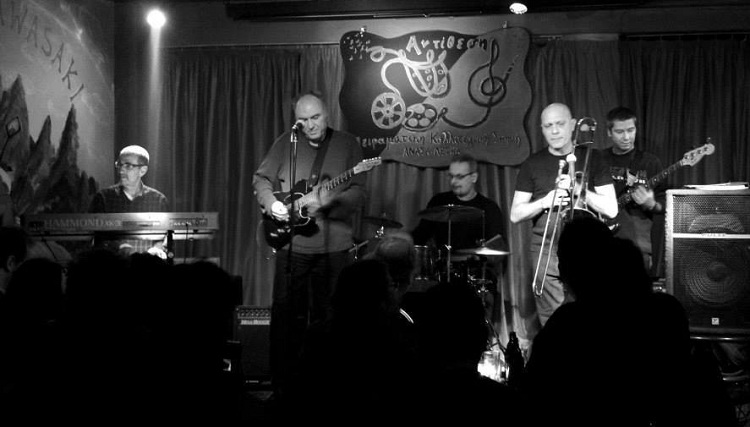