"Blues music, as a means of art, aims in showing the harsh environment in which it was created. It managed to get people to realize the harshness of slavery and human exploitation and therefore it created the path to understanding not only the way in which music can be used for relief and mental healing, but also as way of deeper understanding of slavery itself. Thus, it would be common sense to say that blues music helped in changing the social and political status quo globally."

It all started in late 2011 in Volos, Greece, when a company of two guitarists decided to make a blues band. They also added electric bass and drums, but they soon realized that was not the real thing. It took a lot of experimenting and rehearsing for the duo to find its true path: acoustic blues. They decided to stick to a basic 2-piece format (2 guitars and vocals), but later they added a female voice. After all, the line-up concluded to two guitars, an acoustic bass and percussion. Smokin’ Blues Sessions finally is a quartet in late 2016. The band has played many gigs (in Volos mostly) in various clubs, pubs, parties etc. In the August of 2017 the band recorded one of its live performances at Paou Festival. The album is available at Soundcloud.                    (Photo by Maria Fragoudaki) M.S: When I think of blues people Ι see the true people. Simple people, just people… and for me blues is the art of taking the sad situation and make it a kind of joy of life.

D.D: Blues is passion, love and desire...a scream for life and freedom. I totally understand the blues people while they express their feelings, I feel the same.

P.D: The blues is a form of expression for me. Its directness is what drew my attention. Its simplicity (which leaves you also space to experiment, if you want) is what keeps my attention focused in that genre. The fact that all these people sounded so different, passed on different messages, through the “same” kind of music drives me in a direction to free myself and play or sing in my way. I guess that the blues people, more or less, teach me that too. It’s like hearing: “Mean what you sing”. And to mean it, you’ve got to find it inside you. It’s a process that goes way beyond music itself. That’s what I enjoy the most.

How do you describe Smokin' Blues Sessions sound and songbook? What characterize band’s philosophy?

M.S: The sound of the band is acoustic and semi-electric, trying to catch the feeling of the pre-war blues. Guitars, slide, harp and vocals are what we play, and we mostly try to perform the classics and a little bit more. We do not have our own songs, because we don’t feel that we should.

D.D: The philosophy of the band is a return to the roots, to find the little secrets of the music, to touch the feel of the people who were playing for their souls and not for the money. Semi acoustic sound and classic songs with respect to the first recordings characterizes our band's philosophy.

P.D: We started with a back-to-the-roots philosophy. Since then, there have been lots of changes, but this was the thing that never changed. Of course, there is more than enough space for evolution towards that direction, but the fact that we’re all on the same page is very encouraging. As far as the songbook is concerned, we are extending from the Mississippi Delta blues period as far as Chicago blues. The approach is a mix between the two. Somehow, more traditional playing, but with “electrified” sound, where it serves us. 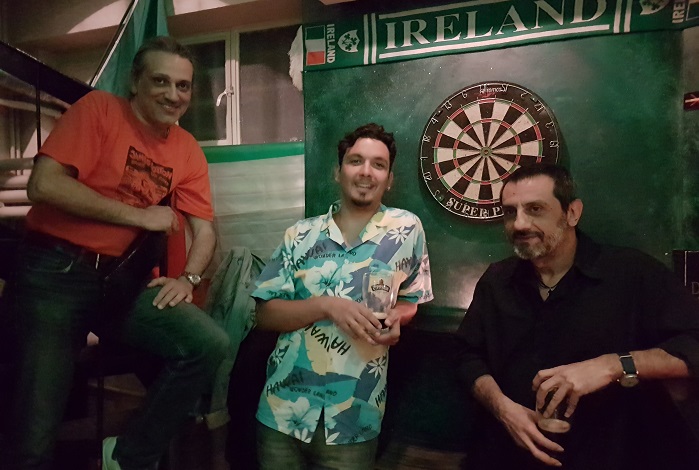 "When I think of blues people Ι see the true people. Simple people, just people… and for me blues is the art of taking the sad situation and make it a kind of joy of life." (Photo: Smokin' Blues Sessions)

M.S: I remember when playing with the guys at Moni Paou festival two years ago. This is a very special place in the middle of nowhere, where people from all over Europe are coming – I still don’t know why! During the gig they were all crying and singing in ecstasy without a drop of alcohol (it was not available at that day). I have not seen anything like that before!

D.D: Many happy times, some dad, but creative all this years. I remember right now the gig in Paou fest 2016 all the people to stand up from their seats and dancing, feel the rhythm of the music, feel happy with no drop of alcohol! Impressive!

P.D: Generally speaking, nowadays gigs tend to be calmer, in contrast with stories I’ve read. So, I have no big story to tell about it. It was about playing music and then relaxing with a drink or so.

M.S: I miss the feeling of the new. I think that we have heard almost everything and we recycle the music, so there is not a new push for the genre (like the eighties with SRV and all the new electric revolution). Thinking like that, my fear is that we will not see such an original musician like him in the near future, and all we will try to play like him or BB King. Albert King and Freddie, Albert Collins, etc. On the other hand, my hope is that someday there will a new era for the blues again!

D.D: I always look for authenticity, blues music came up from the real life, not market business. We have to look back and don't forget our roots.

P.D: I tend to believe that nowadays blues has lost its uniqueness. The artists sound similar to each other and there is a form of repetition in most of the works. I fear that, if something won’t change, blues will be considered just a pattern of 3 chords. It has to stop being typical. You can’t hear the similarities to that extend as you hear older stuff. The older the album, the more personal the sound and the approach.  I believe that a further search on the more traditional approach gives the artist one chance to redetermine his very own self and attitude towards music. Therefore, I hope that more people will try to find themselves and be themselves, in any way they feel appropriate. "The blues is a form of expression for me. Its directness is what drew my attention. Its simplicity (which leaves you also space to experiment, if you want) is what keeps my attention focused in that genre. The fact that all these people sounded so different, passed on different messages, through the “same” kind of music drives me in a direction to free myself and play or sing in my way."

M.S: I think that the most interesting period was the 80’s. During those days, nobody knew what is blues. They thought that blues was dancing with the ballads… And that was when Blues Gang were born… and Thessaloniki became the mother of the Blues in Greece.

D.D: I think in the nineties happened a blast in the blues scene. Blues Wire and Elias Zaikos was the leading band in Greece.

P.D: I believe it’s gotta be the ‘90s. Most of the bands that have a big name in the blues scene even today have started playing then. So, even if I was too young to remember it correctly, I choose that era.

M.S: To find many venues and many more people to enjoy the music!

D.D: I believe there is a problem with the halls, there are not as many as there should be for the bands to play in and at the same time the media in Greece don't promote this specific genre of music. A big international blues festival may help to make known this music to younger people.

P.D: I see that most people tend to think that blues is an oversimplified kind of music. The problem is that they approach it that way. As a consequence, audience overgeneralizes and loses much of its interest to this kind of sound. So, if I could, I’d change oversimplification.

M.S: I learned that you have to be a real man to play and hear the blues, and when you are ready, you may meet a lot of brothers and sisters like you all over the world.

D.D: The whole story is exciting... How this music born and grow under of such a difficult condition, a life with pain and misery...teaching us we never give up.

P.D: Blues culture got me into thinking all about the people who were treated in an inhumane way and their problems. Up ‘till now, I’ve been lucky, so I can’t say that I met all this trouble personally. But I started hearing much closely to the problems of the people nowadays. I believe that the way I see their trouble gives meaning to my singing of these old songs. M.S: It all started as an answer to the suppression of the white Americans to the Afro-Americans. Many things happened after that. Discrimination between the north and the south, new laws, new governments, a black president… In my opinion blues helped in that way. But I think that after all those, it came to mainstream…So, I don’t see any significant implications now…

D.D: Blues music, as a means of art, aims in showing the harsh environment in which it was created. It managed to get people to realize the harshness of slavery and human exploitation and therefore it created the path to understanding not only the way in which music can be used for relief and mental healing, but also as way of deeper understanding of slavery itself. Thus, it would be common sense to say that blues music helped in changing the social and political status quo globally.

P.D: I believe that blues is the music of the oppressed and the marginalized populations. It more than profound that in modern Greece these kinds of populations exist, but I don’t think the blues are of their taste. It could be used, though, as a way of expression. The marginalized most of the times hold the rebirth of the society in many ways. The blues have once been the way by which these voices were heard. Who knows, it could happen once again.

D.D: Mississippi in the early nineties would be the perfect option. This is the place where blues originated and hometown of many of the musicians that I looked up to growing up and still use as an inspiration.

P.D: Well I’m not much into sci – fi. Although we live in a strange period for the world, and especially our country, I‘d like to live all of my days in the here-and-now.