"Listening to blues music will lift your spirits and make you forget your troubles for a while, especially if you can attend a live show."

Johnny Bishop: Johnny Got His Harp

Johnny Bishop’s roots are in the south. He grew up in Charlottesville, Virginia, home to the University of Virginia. Charlottesville was a small college town that had a hot and active music scene in the late 60’s and early 70’s. Checking out the bar bands and sneaking into ‘Frat’ parties were daily events. Many bands came through Charlottesville and stopped for a show as they travelled between Atlanta, Washington DC and New York. They included Muddy Waters, Charlie Musselwhite, Sugar Ray Norcia, Ronnie Earl, Bob Margolin, Fabulous Thunderbirds, Delbert McClinton, The Charlottesville Blues Allstars & The Nighthawks. 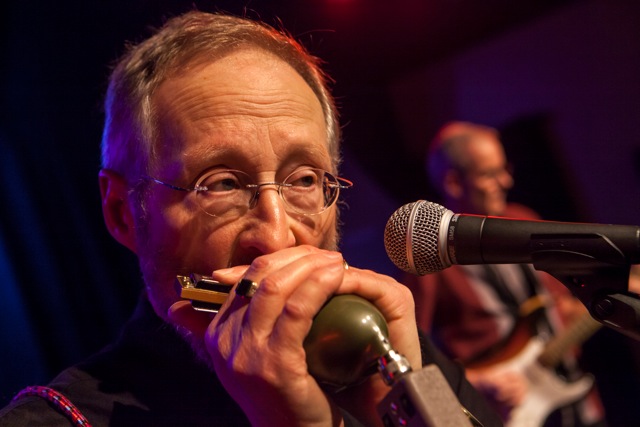 Johnny lived at these shows, watching, listening, learning and soaking up all he could. Ultimately, this was the best education he could get in the field. Johnny was elementally moved the first time he heard the blues and has never looked back. “I started out playing guitar. I fooled around with a harp given to me by a close friend, but it seemed hard to get a good sound out of it. I picked it up from time to time and finally one day I bent a note and just about fell out! That was the sound I had been hearing but not finding.”  Now, over 30 years later, he’s still at it. A six year stint working at Hohner USA in Richmond, Virginia, was a turning point. From then on, music became his full time passion. Now residing in New Hampshire he performs with a new version of his Charlottesville band, Johnny B and the Goodes. and released his second record, Have Mercy on the Big Mo Records Label in the summer of 2008.

I’ve learned that for me, blues is as important as getting up out of bed in the morning. I need to hear it, play it and listen to it as much as possible because it motivates me, makes me feel like living and learning. It’s a mood shifter and motivator. It is music made from the gut, raw emotional soul. It enables me to share and express my emotional art the way I know how too.

How do you describe Johnny Bishop sound and progress, what characterize your music philosophy? 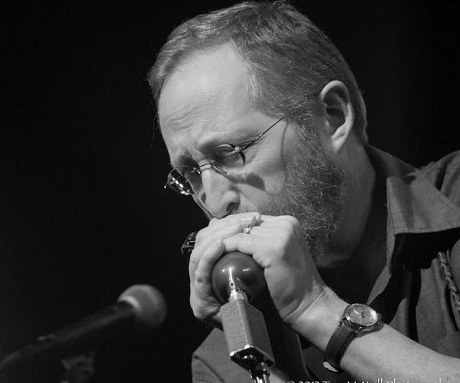 It’s a traditional Chicago blues sound geared towards keeping that style alive. Over the years I’ve gotten deeper with it, as I‘ve grown older. I enjoy playing this music and put it out into the world for folks to discover and learn about who may never have heard it until they happened to walk in some venue where we happened to be playing.

It’s all been pretty interesting, I’ll have to admit! I cannot recall a worst moment. But the worst times have definitely been when I wasn’t playing much.

Why do you think that the blues music continues to generate such a devoted following?

Because it’s medicine. It’s a natural healer. We’re human, and that means from time to time we get low down in the dumps and stressed out. Listening to blues music will lift your spirits and make you forget your troubles for a while, especially if you can attend a live show. This music makes your body want to move, to dance and shake it all out! And it’s just plain fun. Who can resist that? Blues is the truth.

Do you remember anything funny from Bob Margolin, Tinsley Ellis and The Nighthawks?

Bob Margolin has a great sense of humor, as does Tinsley. I remember Tinsley Ellis giving everybody in the band nicknames and when I sat in he gave me one too, and introduced me as whatever it was.

Mark Wenner was showing me his rig and explaining it to me. The Nighthawks were very loud in those days (Probably still are?) and when I played through his rig with them it seemed even more so on stage. At the end of the night I mentioned something about the volume and he grinned, nodding his head and said, “yeah, I got a pretty loud band.” in a proud sort of way. That has always cracked me up. "It’s a mood shifter and motivator. It is music made from the gut, raw emotional soul. It enables me to share and express my emotional art the way I know how too."

What do you miss most nowadays from the 70’s? What are your hopes and fears for the future of music?

I miss the amount of work there was, number of places to play and the folks that used to come out to hear live music. I hope that can pick back up before I’m too old to get back in on it. My fears would be that there is no more live music, performed by real musicians and that greed ruins it all.

What the best jam you ever played in? What are some of the most memorable gigs you’ve had?

Wow, there have been so many memorable ones it’s hard to say which was the best. Playing with The Legendary Blues Band just shortly after Muddy had passed was extremely meaningful. Hanging out after the show, sitting and talking with Pinetop Perkins, Calvin Jones, Willie “Big Eyes” Smith and Jerry Portnoy were educational to say the least.

They were all nice guys to be around. Just talking and laughing, the usual stuff. Billy Price had a real cool handshake I’ll never forget. I cannot describe it; I‘d have to show you.

Are there any memories from Little Charlie and the Nightcats and The Fabulous Thunderbirds, which you’d like to share with us? 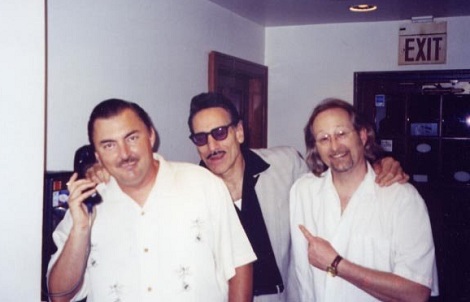 Sitting in with Little Charlie, Rick Estrin and the Nightcats and The Fabulous Thunderbirds was incredible. The first time I sat in with the Nightcats Rick called me up and showed me the volume on his mic and walked off stage. I was a little nervous for a minute until we started the tune and then everything was fine.

With the Thunderbirds, when Kim called me up I was standing back by his amp playing. When it came time for my solo he looked back at me, shook his head and walked back to me, put his arm around my shoulders and walked me up to the front of the stage and motioned that this was where you belong when you play a solo with my band. I’ll tell you, when you sit in and play with bands like these, you’re butt is backed up man! These bands know how to back up a harmonica player, and it kind of lifts you up to play at a higher level than you even knew you were capable of. Unforgettable experiences.           (Photo: Johnny, Little Charlie and Rick Estrin)

It’s an extension of the human voice; it can cry, weep, moan, growl and scream. It’s small, relatively inexpensive and you can carry it in your pocket. No secrets. It’s emotions, feelings and rhythm.

You create some of the finest Harmonicas. What made you get involved in the craftsmanship of?

Finding out that it was possible to make an extremely efficient and in tune instrument that lasted longer and played so easily.

What is the difference between a hand crafted and a factory made instrument?

Well, as with almost anything that is made one at a time versus hundreds and hundreds at a time the results are going to be noticeable. The main differences would be the hand crafted ones are airtight, easy even playing all across the harp and they are in tune. 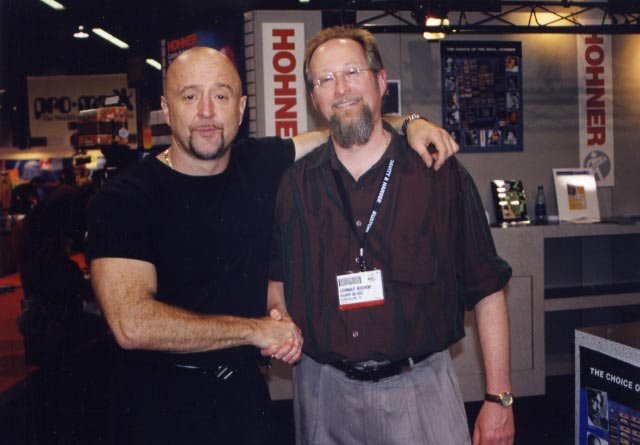 "I’ve learned that for me, blues is as important as getting up out of bed in the morning. I need to hear it, play it and listen to it as much as possible because it motivates me, makes me feel like living and learning. " (Photo: Johnny and Kim Wilson)

What’s the best advice ever given you and what advice would you give to new generation?

Kim Wilson told me if you are going to be a harmonica player you had to be a singer too. Rick Estrin told me to go back and listen to all the old stuff I’d listened to over and over when I was initially learning to play and I’d always hear new things that I’d never noticed before. Just listen. No playing along. Just listen. Sage advice from wise men. I’d tell a new generation you’ve got to love it to do it. There is no money in it and fewer and fewer places to do it.

What are the lines that connect the legacy of Blues with Rock and continue to Jazz and Roots music?

The lines are all connected, handed down from one to the other, all throughout time.

Oh, we have to stop at a day?? Well take me to the early 1950’s on the south side of Chicago where all the cats are blowin’ and what a great day that would be!