"The blues is a very unique form, perhaps due to the deep history of racial divide, which also enables people to come together and have mutual respect. That’s why I adore blues and roots, as I have experienced myself the power of music and how it helps society and cultures become better."

Danny Loong: The House Of Art

Danny Loong was bandleader of Ublues, one of Singapore's more traveled bands in Asia. The band performed in Australia, Spain, Italy and parts of Asia and received critical acclaim in USA at the "International Blues Challenge" in Memphis USA in 2003. Danny's band shared same billing with artistes like James Brown, Bob Dylan, Robert Plant, John Legend to name a few and Ublues was also the first Asian band to be invited to perform in the prestigious music festival in Byron Bay, Bluesfest in their 20 years history. They played the iconic festival 4 times over about 9 years. After the band became defunct in 2005, Danny co-founded a music and lifestyle company Timbre Group with partner Edward Chia. Timbre Group's diversified portfolio of music and lifestyle brands forms a unique and holistic eco-system of brands, ranging from entertainment, food and beverage concepts such as their series of 7 restaurants and bars, key events Timbre Rock and Roots and Beerfest Asia, music and artiste management arm and a music school, Timbre Music Academy. Danny and Edward were both conferred the "Tourism Entrepreneur of The Year" award by the Singapore Tourism Board at the Singapore Experience Awards in 2010. Timbre Music, the music and artists promotion arm of the group, spearheads initiatives to meet the diverse entertainment demand that the Singapore audience has been clamouring in recent years. Since its inception, Timbre Music has presented a wide variety of commercial, independent and eclectic acts ranging from Bob Dylan, John Legend, The Fray, Gipsy Kings, Buddy Guy, Ernie Watts, Dirty Dozen Brass Band, Orquesta Buena Vista Social Club, Vertical Horizon, Jools Holland, Colbie Caillat to Asian artists such as Endah & Rhesa, David Choi, Zee Avi and more. Timbre Music also represents the host of resident artists currently playing at Timbre venues and extends production expertise to complement gigs. Timbre team believes in championing Singaporean musicians and Asian music and also to introduce the audience to the diverse genres of music that is on offer in the greater world, regardless of its origins.

What do you learn about yourself from the Rock n’ Roots culture and what does the blues mean to you?

For me, Rock n Roots and the blues are many things but two things that continue to inspire me about the music, is learning about the history of the early African Americans which has a profound influence how the music came about and how the music was an expression of their human struggle, survival and liberation. Secondly, how it has the unique ability to fuse with other cultures, music styles, and evolve to other styles even till this very day.

How started the thought of Timbre? How do you describe and what characterize Timbre mission and philosophy?

Timbre started with a social mission of building a viable eco-system of related music and lifestyle brands and businesses and provide a platform and multiple opportunities for Singapore musicians, and also to present a diverse range of musicians from outside Singapore as well, through our 6 live music venues all around Singapore, and now our first regional venue in Kuala Lumpur, Malaysia. Our objective is to continue to be a home for Asian musicians in the region and use music as a positive and powerful medium of cultural and commercial exchange.

I would not call him an acquaintance, but think my business partner for the last 10 years do exchange and share ideas and give each other advice. I think the best advice he would give anyone who’s in the creative field is to also really focus on the business side. It’s the responsible thing to do so as to sustain and build the business to greater heights, and build the others around you. 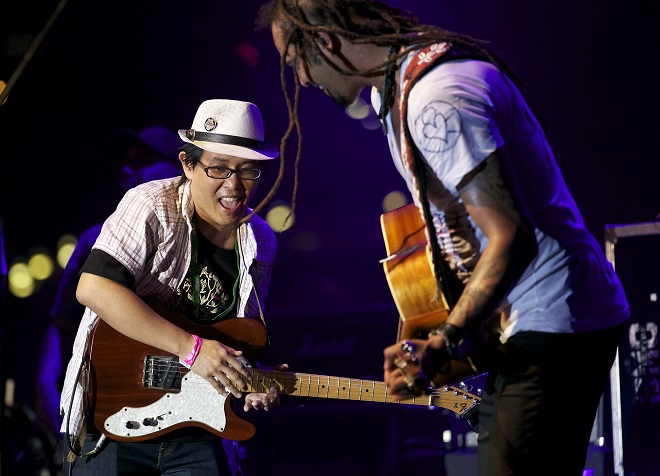 "Rock n Roots and the blues are many things but two things that continue to inspire me about the music, is learning about the history of the early African Americans which has a profound influence how the music came about and how the music was an expression of their human struggle, survival and liberation." (Danny Loong & Michael Franti on stage, 2011 / Photo by Jonathan Wong)

Are there any memories from gigs, jams, festivals, studio sessions and events which you’d like to share with us?

There are too many to mention, but I have been honoured to have been the bandleader of Ublues, who were the first band from Singapore and Asia to perform at some of the world’s prestigious festivals like East Coast Blues and Roots (Bluesfest Byron Bay), Barcelona Blues Festival in Spain, Buddy Guy’s Legends in Chicago, and competed at the International Blues Challenge in Memphis where we got to the semi-finals and scored a paid gig at a Memphis blues club, Club 152 back in 2003. This year is truly exciting as my new band Raw Earth will be performing at Bluesfest in Byron Bay again alongside a host of legends and great artists and bands. From those experiences, it’s always amazing to meet other people from different backgrounds, all loving and grooving the blues.

I think the songs of the 60s and 70s were just timeless and it’s something I think is missing from the world of music. The simplicity, passion, rawness and humility of music of those times hugely inspired a whole new movement. There was so much substance and content in the songs which spoke of a deep meaning and story which I hope to see revive in this modern times. My fear is that blues, roots and all early cultural music will get lost in this new world of technology, hence it’s crucial that we who love blues and roots music, need to work together and keep it alive, with the help of great festivals all around the world, the labels who still invest in the music and the bands who stay inspired and driven to continue to produce outstanding work of music. "I think the blues in America really helped race relations, multi-culturalism and foster friendships across the races, and some of the legendary recordings included people who are different racially, and frankly that was the prevalent symbol of the music and the times captured musically in these recordings and concerts." (Photo: Robert Plant & Danny Loong, Singapore 2013)

Make an account of the case of the blues in Singapore. Which is the most interesting period in local blues scene?

I think it would be the 70s through to the early 80s where there was quite an active local blues scene with bands like Straydogs and Pest Infested amongst others, who released albums and went on regional tours. It was the British blues rock revolution, which was the main influence for bands in Singapore at that time along with bands like The Beatles, and had young people then starting bands, and writing songs. It was a vibrant time. I think that something its started to brew in Singapore whereby there are now more blues jams, including at our Blues and Roots bar, Barber Shop by Timbre, where I continue to meet young musicians swinging by to jam and also starting blues. That’s very encouraging.

Are there any similarities between the blues with local folk music and Southern East Asian traditional forms?

Yes there are surprising similarities actually. I have listened to traditional folk songs from Taiwan, Sarawak, Sabah by the indigenous people, which sounded like black gospel, blues and roots. The stories of some of these cultures are also similar when they talk about struggles, survival and sound so heartfelt. Perhaps that’s why some of these people also became musicians playing blues, roots, jazz and funk.

I think I am touched and encouraged by the many young musician and artists coming up in the music scene in Singapore these days. Some of them are signed with major labels, some are doing it independently, but there is an overall good energy and drive to develop the music scene, which is great to see and be part of. The future of music is with our young, and therefore it’s important to support and guide them through where appropriate, so that music can live on.

What is the impact of Blues & Rock n’ Roll culture and music to the racial, political and socio-cultural implications? 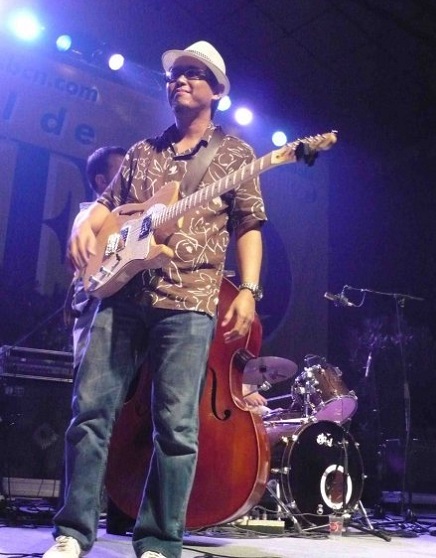 Well I think the blues in America really helped race relations, multi-culturalism and foster friendships across the races, and some of the legendary recordings included people who are different racially, and frankly that was the prevalent symbol of the music and the times captured musically in these recordings and concerts. As for Singapore, it’s actually very similar, at our Barber Shop jams; I constantly watch musicians from all over the world and Singaporeans jam and have a great time together. The blues is a very unique form, perhaps due to the deep history of racial divide, which also enables people to come together and have mutual respect. That’s why I adore blues and roots, as I have experienced myself the power of music and how it helps society and cultures become better.

I would love to be in Chicago watching Muddy Waters or in Memphis watching BB King playing at a Blues Club and maybe get a chance to jam with him… however I am sure the audience there would all be looking at me thinking who, what and where the hell I came from.