"Most of the artists were part of the hippie movement of the time; the underground culture was really a bunch of young kids who'd run away from home. And, they also wanted to rebel against the rules of design and art."

Canada's foremost rock poster artist, Bob Masse absorbed the influence of the psychedelic era to create eye-popping yet elegantly stylized art-nouveau designs distinguished by their fluid linework and intricate figures. Bob Masse is from Canada's west coast and has been producing concert posters since the 1960s. While attending art school in Vancouver, British Columbia, he began his career doing posters for the folk acts that came through town, in exchange for free drinks, tickets, and the opportunity to meet the musicians. 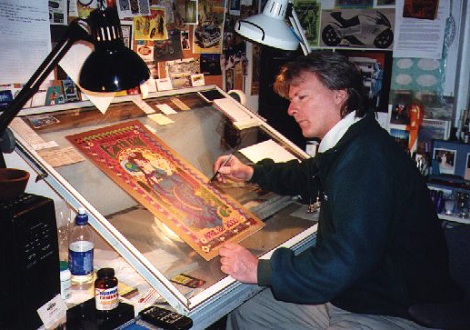 As folk became folk-rock, and Vancouver was visited by such bands as the Grateful Dead, The Doors, the Jefferson Airplane and Steve Miller, Bob continued to produce memorable concert posters for these bands, and helped pioneer the emerging psychedelic art genre. He was greatly influenced by the art and music scenes in Los Angeles and San Francisco, where he spent considerable time in the late 1960s. Masse befriended the Vancouver band, the Collectors, and when they travelled to Los Angeles to make a record, he followed, spending the final years of the 1960s living in the Laurel Canyon area, producing posters and album covers for various bands of the day. His work from this time is highly sought by collectors.
Bob's designs reflect his interest in the art nouveau movement and the work of Alphonse Mucha in particular. While he employs many of the techniques of that period, his brilliant colour palette, unique lettering style, and bold composition give his art a signature look. As rock concert art began to enjoy a surge in popularity during the 90s, Masse returned to the medium with renewed force, producing a steady stream of posters for the first time since the 1970s. Bob continues to produce pieces for contemporary performers, such as, Tori Amos, the Smashing Pumpkins, Neil Young, and many more.

When was your first desire to become involved in art and music & what are your first musical memories?
When I was in art school, doing posters for local shows allowed me to do the type of art that I wanted. And being a young guy in my early 20s, I was very happy to be able to get into concerts for free!

What first attracted you to psychedelic culture? What does “Psychedelic Art” mean to you? 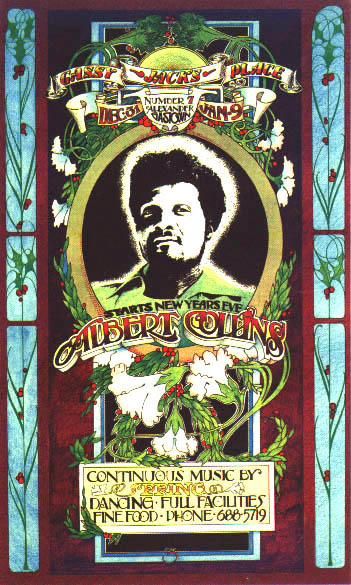 When I first went to San Francisco in 1964/65 and walked around Haight Street, it was amazing to see all the brightly coloured artwork posted on the streets. So, I brought these ideas back to Vancouver and incorporated the psychedelic style into my posters. For me, psychedelic art meant a total breakdown of the rules of art and design that I had learned up to that point. Instead of being straight type, the lettering flowed through the art and became part of the art as in Wes Wilson's work.

"I had discovered art nouveau and fell in love with it, especially the work of Alphonse Mucha."

How and where did you get the inspiration for your art? Who were your mentors in painting?

I don't do painting and all my work is graphic art. I had discovered art nouveau and fell in love with it, especially the work of Alphonse Mucha. It was quite prevalent at the time in San Francisco. The San Francisco art renaissance was much like the turn of the century.

How do you describe Bob Masse’s artistic philosophy and progress?

I would like to expose a younger generation to the art nouveau movement and turn of the century art, in general.

What is the relation between visual art and music?

Being in Hollywood in 1968/69, going to all those great concerts that was a lot of fun for a young guy, but not necessarily great from a career point of view, although all those pieces I did back then are very popular now! But the mid-90s were a good time when I produced a lot of pieces I'm happy with. The worst time was 1992, when I was back in Vancouver from Los Angeles and there was no work due to a recession.

Most of the artists were part of the hippie movement of the time; the underground culture was really a bunch of young kids who'd run away from home. And, they also wanted to rebel against the rules of design and art.

What experiences in your life make you a GOOD artist? 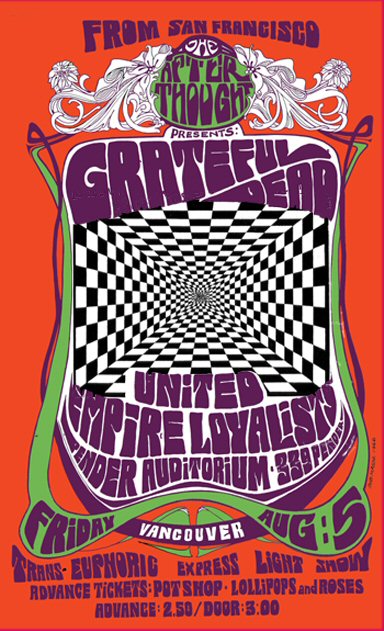 I have a very good basic foundation in drawing, which I got at art school, plus I have a strong work ethic.

"I miss the excitement ofsomething new in the air. Also, the music! It was a time of incredible musical creativity."

Why did you think that Bob Masse (psychedelic art) continues to generate such a devoted following?

Well, I'm not sure it does, but I hope so!  If it does, I would say it is because it is somewhat classical; and I like to present a high esthetic vibe, which has longevity.

Which memory from Grateful Dead, The Doors, Jefferson Airplane and Steve Miller makes you smile?

Picking up the Grateful Dead at the US/Canada border. They had driven up from the US to Vancouver in a long psychedelic bus. You should have seen them: long hair and pointy shoes. The border guards didn't know what to do with them.

Are there any memories from Laurel Canyon area and hanging out with Big Brother & the Holding Company, and Taj Mahal which you’d like to share with us?

Big Brother didn't live in Laurel Canyon; they never left San Francisco. And Taj Mahal lived in Topanga Canyon, not Laurel Canyon. I lived in Laurel Canyon, and some of the musicians there at the time were Joni Mitchell, Crosby Stills & Nash, Fleetwood Mac, and the Mamas & the Papas. On a warm summer night, you could walk up the tree-lined lanes and hear Joni Mitchell practicing at the piano. We'd go to Frank Zapppa's place (he was never home), and use the bowling alley he had in his basement. Great times!

What is the line that connects the legacy of art nouveau, to psychedelic art with nowadays?

Art nouveau was an esthetic craft movement which lent itself to advertising and all kinds of design work. The turn of the century and the advent of printing brought art to the people, whereras before that it had been the domain of the elite. Likewise, psychedelic art was "of the masses", specifically the baby boomers.

What is the “feel” you miss most nowadays from the 60s? What we should keep or forget of the “Acid” era?

I miss the excitement of something new in the air. Also, the music! It was a time of incredible musical creativity. What should we forget?  Probably dancing around all day hoping someone else will pay your way! But let's keep the music and the art.

How has the psychedelic “ART” changed over the years and what characterize it? 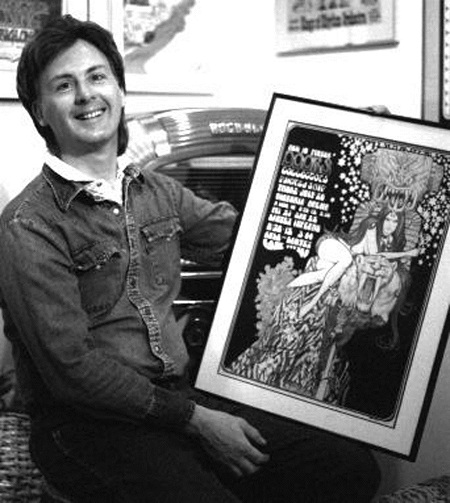 Psychedelic art has become computerized. There are actually psychedelic lettering typefaces. I don't know of many other artists who are doing hand-drawn psychedelic art and lettering anymore. It has been replaced by the silkscreen style.

"I would like to expose a younger generation to the art nouveau movement and turn of the century art, in general."

Make an account of the case Canada and Psychedelic. What is the impact from 60s Acid Revolution in Canada?

Canada is now a multi-cultural, politically correct, socialist country, which it was not before.

What from your memories and things (records, posters, books etc.) you would put in a "capsule on time"?