"The Rock and Blues are musical genres of great power, inspire freedom, are contagious, show how good it is to be alive in this world with a special soundtrack for all times!"

Kleber Dias: Music With No Boundaries

Kleber Dias start learning to play guitar in the mid 70s! At this time, his contact with the music of the Beatles, Stones, Led Zeppelin, Deep Purple, Black Sabbath, among others, was fundamental in his musical development. So the Blues was presented to him! Only a little later can hear the masters of the Blues, starting from then, the identification was complete! He beganing of his career as a musician playing bass in a rock band, but the guitar has always spoken louder and then in mid-80s he created his first band, “OS 4 CARAS”, now as a guitarist and singer, played for many years in night clubs and parties. Then in the early '90s, along with Zilton Spencer founded a blues band, THE EXPERIMENTAL BLUE. The concept of the band was a fusion of blues with other genres and revisiting classics of the blues. 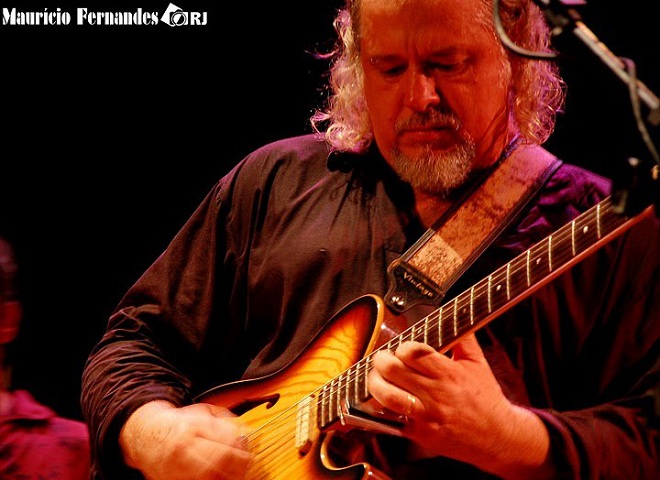 With the absence of his young drummer Carlos Cicero, who died in 2000, the experimental Blues stopped their activities for a while, only returning in 2001 with a new musical conception, the new training come to rely on Beto Silva, a great Brazilian percussionist, who takes the rhythmic section, Zilton Spencer on harmonica and acoustic guitar, Rodrigo Bahiense on bass, and Kleber Dias, guitar, vocals, mandolin and acoustic 12-string guitar. In 2001 integrated the cast of musicians on the musical,THE  LIFE OF  St. FRANCIS of ASSISI by Ciro Barcellos, touring Brazil and Italy.

In 2003, Kleber Dias is asked by Jefferson Gonçalves to join his band and develop a musical work based on the mixture of Blues with Brasilian Northeast Music. In eleven years with the Jefferson Gonçalves band did a lot of gigs by Brazil and abroad, which also contributed to the evolution of this work, much can be learned from the musical diversity of the places through which he passed, fundamental material for the development of this unusual mixture and so successful between Blues and regional music of Northeastern Brazil. Throughout his career he had the opportunity to play with as a Great musician, Peter Mad Cat, Norton Buffalo, Celso Blues Boy, Milton Lessa, Renato Massa and many other Brazilian musicians! For short wait release of his solo CD!!

When I started playing guitar, with about three months of learning, I remember that I played free blues solos, so, an older musician who passed on me a certain day, asked me: Do you know what kind of music you are playing? I answered: I think it's blues! So I think the blues is a deep feeling that can be expressed as music! Be it happy or sad!

How do you describe Kleber Dias sound and songbook? What characterize your music philosophy?

I see my music as something very natural in my life, because I'm always right when I'm playing or composing or even building a new guitar! I think there’s in the world of music no boundaries, everyone can take ownership musically and starting to create their musical ideas ... For me music is oxygen, food is most needed and the blues is the main course! 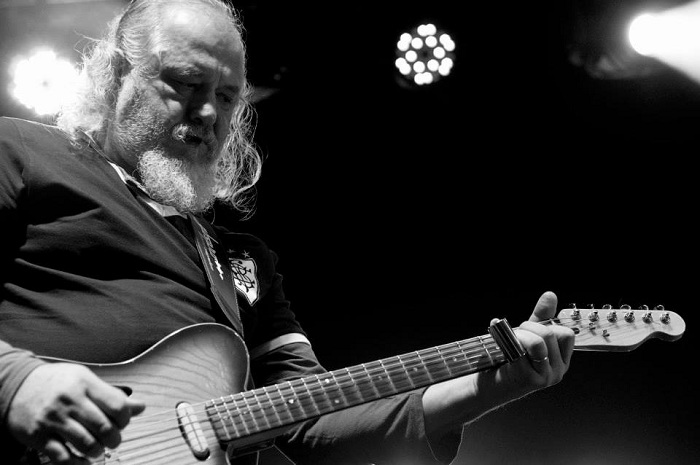 "For me, black music gave rise to most of the popular music that exists today, therefore the greatest legacy of African music in my opinion is the cultural, what was passed from father to son, from master to apprentice."

Why did you think that the Blues & Rock music continues to generate such a devoted following?

The Rock and Blues are musical genres of great power, inspire freedom, are contagious, show how good it is to be alive in this world with a special soundtrack for all times! Are technically easy understanding and plumb time offer many possibilities as you develop and evolve into your playing technique.

Play with Norton Buffalo, Peter Madcat, Scott Henderson, Blues and Jazz musicians coming from the U.S. and other regions of Brazil were awesome and enriching experiences! But, was The mother of Norton Buffalo, through him, I heard a great advice for any Musician, "When you're on stage never turn your back to the audience." But I would add, Making a dream reality is to do exactly what is even more true for yourself!

Certainly there are many memories, we would need many hours to talk about them, many funny and exciting memories! But playing in Dakar in Africa with local musicians was amazing, we see clearly the origin of the Blues in their musicality, hear a work song is a unique experience unmatched! 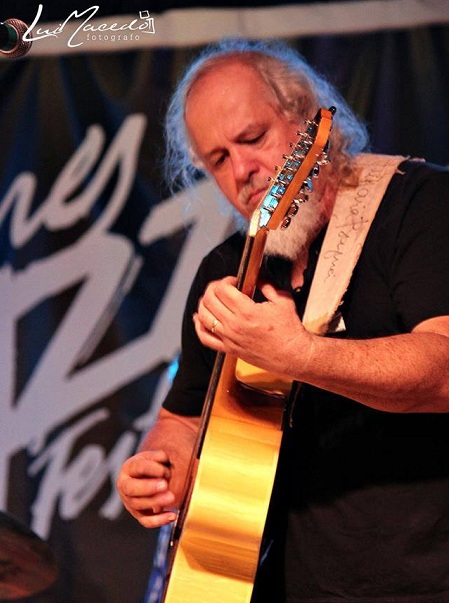 Of the Past I miss the simplicity and complicity of musicians with the style, the old Bluesmen are leaving, and hardly appear more like those other masters. In Brazil it is hard to live and get money  playing Blues, but I feel that in general, the seed has been spreading. Being luthier (instrument maker), I have maintained contact with musicians of various classes, professional musicians, amateurs or just collectors of instruments. When I test or do a demonstration of some instruments, I use the Blues, almost always I see a smile on your rest! I think the future is guaranteed, but we need to keep working on it!

Make mandatory the study of music in schools irreversible character!

From the standpoint of quantity, 90 offered more opportunities was the start of what exists today! Great bands emerged in the mid 80s and during the 90s, many have passed, but I feel that in Brazil the balance has been positive.

What are the lines that connect the legacy of African music with the Blues and continue to Brazilian styles?

For me, black music gave rise to most of the popular music that exists today, therefore the greatest legacy of African music in my opinion is the cultural, what was passed from father to son, from master to apprentice. This is reflected in the regional music of Brazil, especially the music produced in the Northeast! 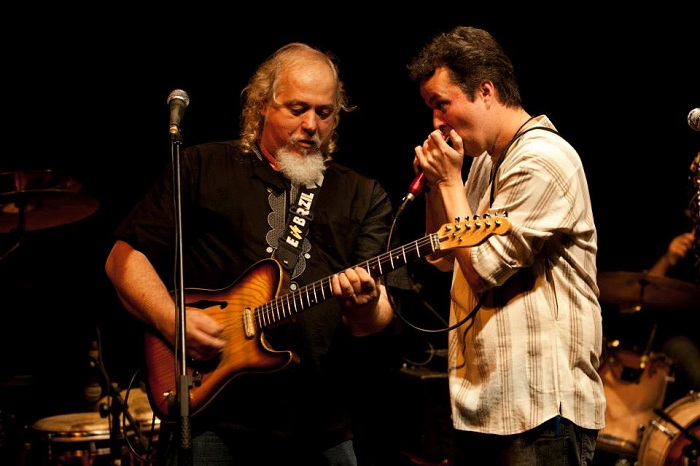 "I see my music as something very natural in my life, because I'm always right when I'm playing or composing or even building a new guitar!" (Photo: Kleber Dias & Jefferson Gonçalves)

I love to laugh! I often compare the band with a playground, many funny situations arise this coexistence! What touched me most was being able to watch a show of Dominguinhos, great master of northeastern music! His way of playing and singing ever touched me!

WOODSTOCK! For everything that happened related to music, sex drugs and rock & roll ...Hahahaha, just kidding! Certainly I would like to be in the Gunter Hotel, at least in the next room apartment 414, listening the  Robert Johnson’s  recordings!

Being a Blues musician in South America is like swimming against the tide with many friends beside.

To BB King I would like to say: Thank you for everything, for your voice, for its beautiful blues phrases, and his amazing tremolo! Thanks Master!

Hey Jimi, can I have your guitar after the show! Hahahaha kidding again!

Mr Hendrix was it like for you, playing at the Woodstock Festival! 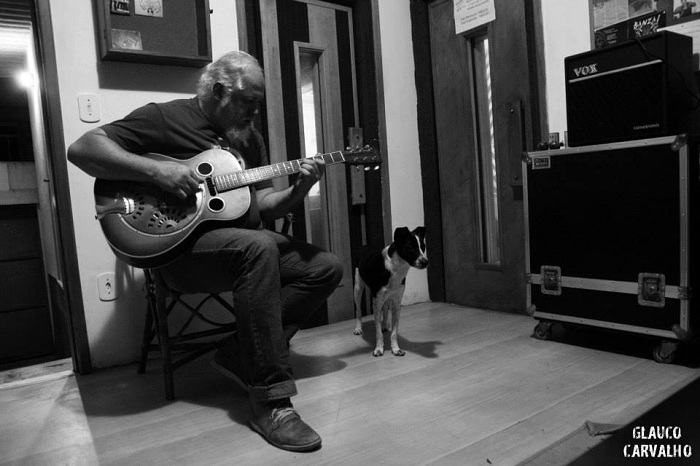