"The blues is the greatest gift of Afro-American culture to the world."

Professor Bottleneck aka Rolf Heimann, born in 1948 in ruined and burned down Germany; early exposure to American country and R'n'R music; teenage years in India; the usual Beatles and Rolling Stones infection; Beatles still admired, Stones only when they were a real down-to-earth bluesband; trips to the US; playing in the street; pub music in France; many bands; finally specializing in bottleneck, lap steel and pedal steel guitar playing...Professor Bottleneck's program combines surprising interpretations of well-known traditionals and classics of the genre with original compositions. Defying the coming and going of fabricated "blues-revivals" and the omnipresent attacks of "digitalization" on the human ear, here is a down to earth musician who plays truly hand-made music to move your hearts and your feet. 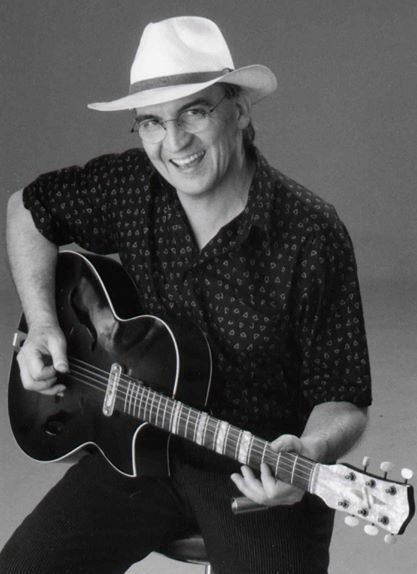 Rolf Heimann (guitars, vocals, kazoo and the like) has learnt his trade in diverse blues groups. In Europe, particularly in Western Germany he is duly respected as an expert on the slide or bottleneck guitar. His gigs in the USA together with the harp-virtuoso Juke Joint Johnny (South Carolina), the East coast picker Scott Perry and singer-songwriter and piano legend Shrimp City Slim have given him that suave Southern finish, and his versions of Southern classics such as Blind Willie Johnson or Robert Johnson, or, for that matter, the lap-steel style of the “Sacred Steel”-tradition have become his trademark sign. Professor Bottleneck pays homage to all the blues people in the world. And if you have doubts about just another white European playing the blues, remember what Charles Mingus once said: "No one could sing my blues but me..., just as no one could holler for you if I decided to punch you in your mouth." So, when all is said and done, just enjoy the music, and let's all share something good. Professor Bottleneck as solo and with Frank Born (blues harp): straightforward country blues and Americana; Professor Bottleneck & the Juke Kings: Jump, swing, boogie; Professor Bottleneck & the Rythm Twins: a cross between Rory Gallagher and a mean alligator.

From occupying myself with the blues and from meeting other blues players I have learnt that this kind of music cannot be composed unless it comes upon you. So, be modest, be part of a tradition, of a stream.

The blues is the greatest gift of Afro-American culture to the world. To me, it is a healer. And whenever the audience feels exactly this, I have achieved something.

How do you describe Professor Bottleneck sound and songbook? What characterize your music philosophy?

I strive for a down-to earth sound, a beat without frills. In my programs and on my CDs I always combine good rocking numbers with one or two spiritual-inspired songs and politically relevant pieces.

Carrying the torch and bringing topics up to date is no contradiction. 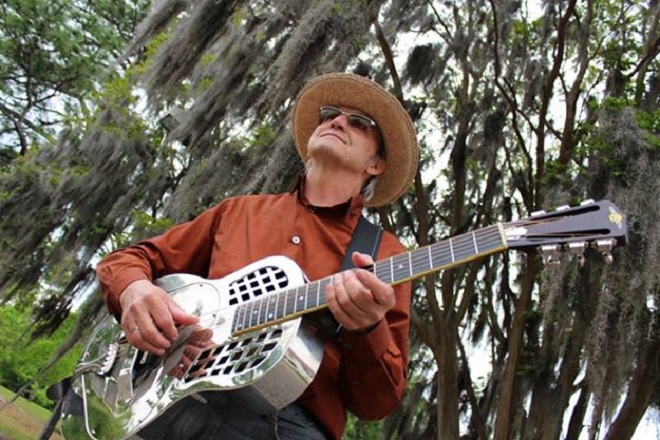 "Well, it's common knowledge now that the Beatles took their cues from Rockabilly and the Rolling Stones started off as a true blues band. Without their success 'white America' might never have realized the beauty of this part of the Afro-American heritage."

The most interesting period is always right now. At the moment a new sphere is opening up for me: taking blues and spirituals to church audiences.

There are lots of “best” moments. But if you want me to point out an example here it is: On my return to a bar in France where I had played before, a lady came up to me and said she enjoyed listening to my music on her walkman while working on the production line of a fish factory, because it made her bear the burden. This is the best compliment a musician can get.

I can't make up my mind about a “worst” moment. But certainly, club owners turning out to be asses would win a high position in a top-ten list!

The best jam I ever played in was one in Charleston, South Carolina, where I first met Juke Joint Johnny (“the harmonica beast of the south-east”) who, after so many other guitarists had been wanking away on their axes, said to me, “You are one MF who knows how to play the blues!”

Playing in the same festival and meeting Billy Boy Arnold there really marked me, because he gave all the musicians some good advice. He said that in the blues the band should not play so loud as to drown the singer, because – different from classical or merely instrumental music – the blues (just like good country tunes) tells a story, which people should be able to hear. 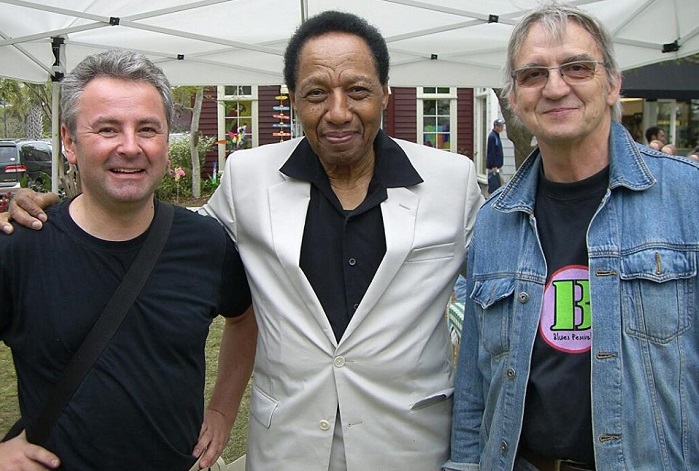 "From occupying myself with the blues and from meeting other blues players I have learnt that this kind of music cannot be composed unless it comes upon you. So, be modest, be part of a tradition, of a stream." (Photo: Rolf with Frank & Billy Boy Arnold)

Busking is the best school for learning to captivate an audience. If you don't they just walk away. It also opens your eyes for the world of those other people who live and work on the streets. Most people just look through them, but they are there, and they have dignity.

What do you miss most nowadays from the music of the past? What are your hopes and fears for the future of the blues?

The development of different technologies has always put live music at risk. Just think of the advent of the juke box in the 1940s! And there have always been ways for musicians to cope with it. What counts in the end is that you find an audience, however small or large, that appreciates honesty and straight forward craftsmanship. The blues as it was – a minority affair of impoverished African Americans – vanished long ago and has turned into a world idiom. As such it has a pretty good chance to go on living. At least that's what I hope and work for.

Stop the theft of music on the internet!

What are the ties that connect the legacy of Blues with the Beatles, Rolling Stones and continue to Folk and R'n'R music?

Well, it's common knowledge now that the Beatles took their cues from Rockabilly and the Rolling Stones started off as a true blues band. Without their success “white America” might never have realized the beauty of this part of the Afro-American heritage. 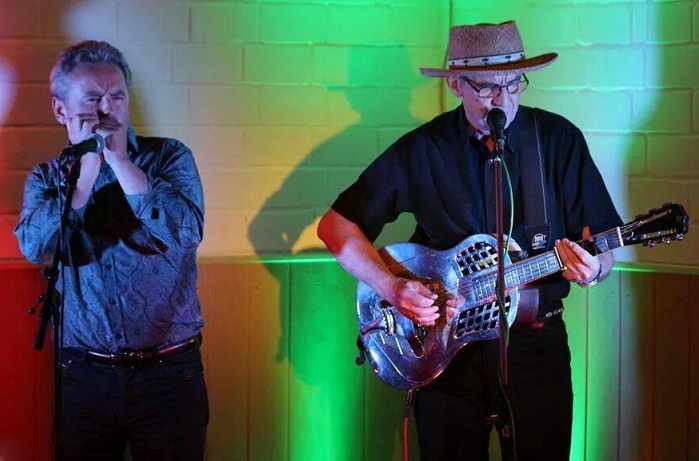 "If I were to switch the time machine into reverse, I'd go to Chicago in the late 40s and jam with Sonny Boy Williamson and Big Bill Broonzy!" (Photo: Rolf & Frank Born)

Make an account of the case of the blues in Germany. What are the differences between the European scenes?

The blues scene in Germany has gone through many phases. There was a period in the 1970s and 1980s when a couple of bands like DAS DRITTE OHR sang in German or in one of the regional dialects, just as the bands in Communist East Germany were forced to sing in German. At one point the Communist party there considered the blues to be some kind of “proletarian” culture, so it even supported some of the bands and artists, like STEFAN DIESTELMANN (who got fed up with the regime and fled the country).

I play a lot in the neighboring Netherlands, where blues rock rules – so that sometimes I'm a welcome exception. In France hardly anybody understands English but the blues is appreciated because it carries all the emotions.

It happens that I have been playing the Texel Blues festival in the Netherlands each and every of the last 17 years, either in it or on the fringe for my fans. We have become one big family, so this is very touching, indeed.

As a teenager I once lived for a couple of years in India. So, let me imagine that one day as an old man I'd be returning to Mumbai, there'd be a blues club and I'd bring my style of blues to the subcontinent. Now THAT would be something!

If I were to switch the time machine into reverse, I'd go to Chicago in the late 40s and jam with Sonny Boy Williamson and Big Bill Broonzy! 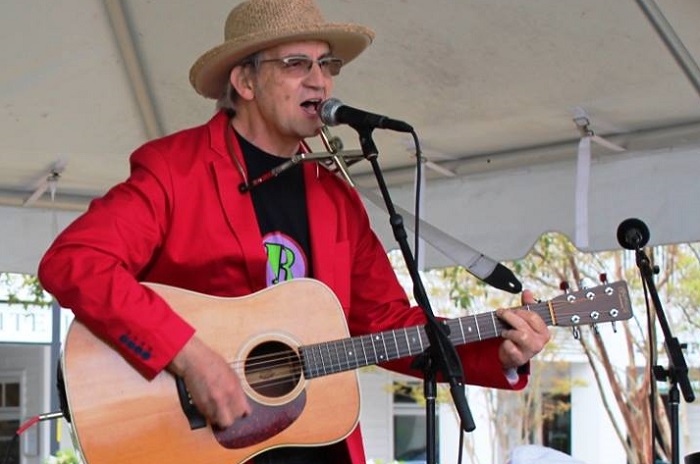