"The legacy lives on through the people that were adventurous enough to cross borders and expand their boundaries, have a need to 'spread the word' and teach the fundamentals to the next generation."

Markos Papasifakis is a songwriter, arranger, singer and guitar player for Athens, Greece. Markos was born in Creta and graduated from Berklee College of Music in Boston, MA. His rich musical journey has given him a wealth of experience that becomes evident in the way he writes, arranges and plays. As influences him credits the British Invasion bands of the 60’s, the funky sounds of artists like Sam & Dave and the Stax experience in general. 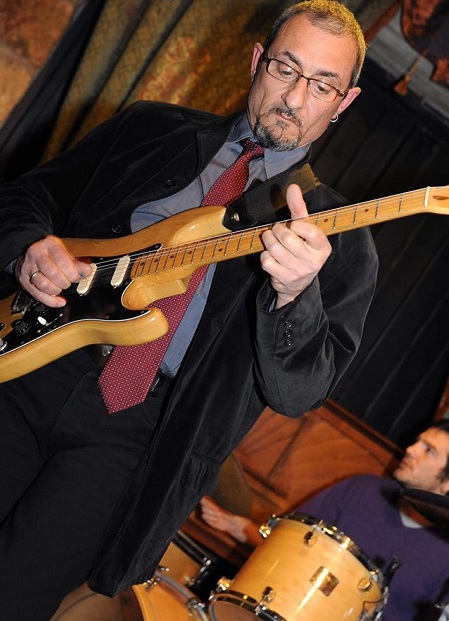 He also has a special place in his heart for the psychedelic blues of artists such as Eric Clapton and Cream, Duane Allman, Rory Gallagher and all those that walked the tightrope of tradition and experimentation. He has shared the stage and supported for BB King, Bo Diddley, Willie DeVille, Melissa Etheridge, Tower of Power, Billy Preston, Bruce Willis and Duke Robillard. Markos Papasifakis is the founder for the Soul/Funk band of COSMIC FILTERS. The COSMIC FILTERS are a new band based in Athens, Greece that have been getting their music and live show together since the spring of 2013. Their original tunes have strains of the R&B/Stax sound, the psychedelia of the late 60’s and the blues revival while retaining their personal, fresh and up-to-date attitude. The two horns add the special twist while strong songwriting coupled with the collective arrangements set the COSMIC FILTERS apart. Their live shows are electrifying and tight, rich with musical interplay and melodic exchange. We invite you to browse through their site and of course, visit them live.

The Blues have incredible depth despite the simplicity of the form. Three chords – fundamental chords that all music is built on. Think about it...You don’t really have to be a virtuoso with amazing technique, incredible speed and vast academic knowledge. You do have to have something to say though. In order to have something to say you have to think about things and ponder about the human condition and in the process of doing that you learn about yourself. I always looked for those good notes that best express what I am feeling at that moment. In my life, I like to keep things simple - just like the Blues.

How do you describe Markos Papasifakis sound and songbook? What characterize your music philosophy?

My sound and my songs are a culmination of my entire musical experience. I listen and have listened and played all types of music and what I liked has left its mark on me. I sort of put music into 2 categories. Good music and bad music – the good I keep, the bad is just unwanted baggage.

Keep an open mind, work on your art and your instrument and be honest. 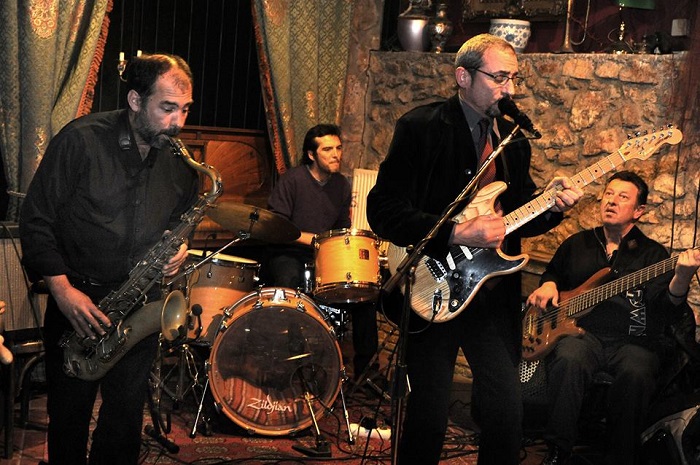 "A local scene does exist but I fear that it is in a state of siege so to say. We all feel that we are underground and underdogs. This of course is nothing new to the old bluesmen we all were inspired by." (Photo: Markos & Cosmic Filters, Athens Greece)

I think that played well, these genres appeal to very basic emotions that all people have. It doesn’t really matter where you are from or what the color of your skin is. You don’t have to understand the language to get the vibe and you do not always need words to communicate a feeling.

What's been their experience from your years in Berklee College of Music? Which memory makes you smile?

My years at Berklee were an experience that have colored me as a musician and as a person. Education, whether formal or informal, gives one a critical facility and aesthetic that often seems to be lacking in a world where it seems that education has merely become a tool to get a good job.

There are many memories that make me smile but how’s this?...Leaving Boston on Halloween day with a bunch of friends to drive down to New York City to see Frank Zappa at the Palladium on Halloween Night...It was crazy and wild and we had a great time!

Are there any memories from BB King, Bo Diddley, T.O.P. and Billy Preston which you’d like to share with us? 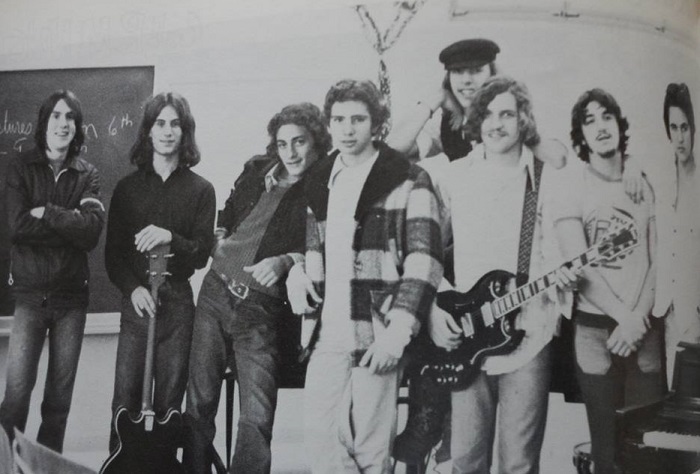 "Follow your heart, trust your instincts and remember that whatever it is that you are doing, you will only do it well if you love it." (Photo: Markos - third from left - and friends, Athens Greece)

I won’t speak of ALL music nowadays but a large portion of it is just a product made to sell as much quantity as possible. Like say razorblades or bubblegum. It is packaged cleverly with beautiful boys and girls selling sex, fashion and lifestyle usually with shallow musical content and nothing to say. As the lions share of the market has ended up in the hands of multi-national corporations who only see music as a product that will enable them to increase share prices and all that that entails, it is no wonder that the intense personality of the bands of the 60’s and 70’s(and the jazz artists previous to that) is harder to find. There are things happening though and life is funny. Just when you think you have it all under control, something happens and your world gets turned upside down.

I’ll tell you what has been troubling me lately. I see for instance on Facebook or Youtube, people playing to playbacks and getting all kinds of “likes”. They have incredible technique and precision but it is like they have purposefully ignored quality for quantity (the 32nd note triplets at 280 bpm) and are ok with playing to a dead as a doornail backing track they made in a room by themselves. That is not ok.

Follow your heart, trust your instincts and remember that whatever it is that you are doing, you will only do it well if you love it. 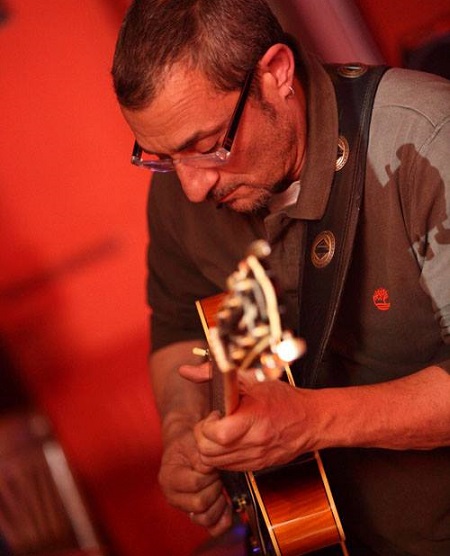 I would love for Video Clips to disappear, I would like the multi-national corporations to shut down and I would be very happy if musicians got payed what they are worth.

"The Blues have incredible depth despite the simplicity of the form. Three chords – fundamental chords that all music is built on. Think about it...You don’t really have to be a virtuoso with amazing technique, incredible speed and vast academic knowledge."

Make an account of the case of local Soul/Blues scene. Which is the most interesting period in local scene?

A local scene does exist but I fear that it is in a state of siege so to say. We all feel that we are underground and underdogs. This of course is nothing new to the old bluesmen we all were inspired by.

The late 60’s and 70’s were probably the high point of popularity but as BB King told me that night in the dressing room: “I play the blues – that is what I do – there were times over the last 50 years that the Blues were popular and times when we all had to scramble to make a living but I am still here.”

What are the lines that connect the legacy of Blues/Jazz/R&B from United States and UK to Greece?

The legacy lives on through the people that were adventurous enough to cross borders and expand their boundaries, have a need to “spread the word” and teach the fundamentals to the next generation.

I have met and heard non-conforming, talented and sensitive musicians searching for their voice in a time when things seem to be geared towards conformity. That makes me feel good. 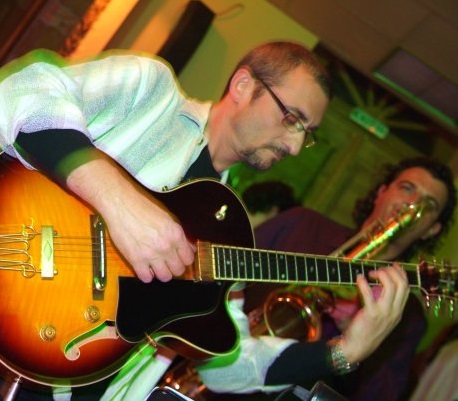 I would like to go back to my childhood and feel the rush of hearing something for the first time.

A completely new sound like say, when I saw the Beatles on the Ed Sullivan Show!!!  I don’t know if I could take a whole day but the moment is something that stays with you forever.