"The blues is having in Italy the same crisis that is affecting all the popular music in the world: lack of renewal; pervasive and self-referential orthodoxy; general shortage of good ideas."

Starting in 2004, WARM GUN comes out the north of Naples swamps (Italy). A Poisonous tree with well sunk roots in the delta waters and only 2 branches: Freddy GHIDELLI, legendary and versatile guitarist of the local musical scene; Max PIERI - aka Rough Max - howler, rootless stomper and bassist. The expressive orientations - with also jazzy and punky smells - let's the band play with impact comparable to larger combos. The replacement of the drums with a resounding footboard (stomp-box) makes the sound unique, rough and bony. 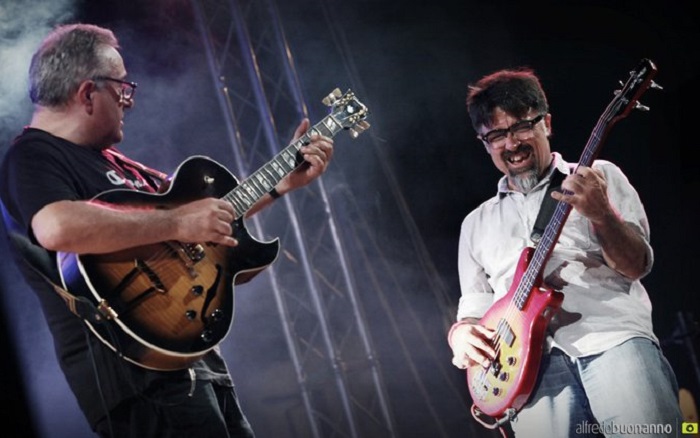 Ferdinando Ghidelli was grown in the seventies musical matrix, he shares the bill of festivals and reviews with rock and jazz artists. After a long experience as a live side man, he started to work in recording studios, becoming a talented arranger and sound engineer himself. As an author he has written for many performers including Mina, the most important Italian pop singer from the sixties up to today. The duo has two albums: “Invisible Man” (2005), a No compromise roots-blues album dedicated to all the invisible men that make the world truer! And the second release "Blues Virus" (2010) consists of 10 tracks, 7 of which are originals and 3 diverse and interesting covers, which include "Nobody's Fault But Mine", "Goin' Down Slow", and "Summertime". With special guest: Mario Insenga, Lino Muoio and Edo Notarloberti, three of the most important Italian blues musicians.

Max: The most important thing I’ve learned from the blues is the need to be genuine and direct. I believe that - before a musical genre - blues is a state of mind in which it seems to me almost impossible to lie. Being artificial sizes up the meta-language of music. The communication is disturbed and music stops being a vehicle for emotions, becoming a pure exercise of style.

Freddie: Blues is not only a music genre for me, but it's rather a lifestyle

How do you describe Warm Gun sound and songbook? What characterize your music philosophy?

Max: Freddie and I come from very different musical experiences. I think Warm Gun is the perfect mix of them: roots music, swing, rockabilly and punk. The blues is the matrix because - more than other kinds of folk music – it has an unmatched expressive urgency and irresistible impulse: few chords, dance, sweat and magic.

Freddie: Warm Gun is a duo who plays very essential minimalist music and tries to approach an “on the road” mood. 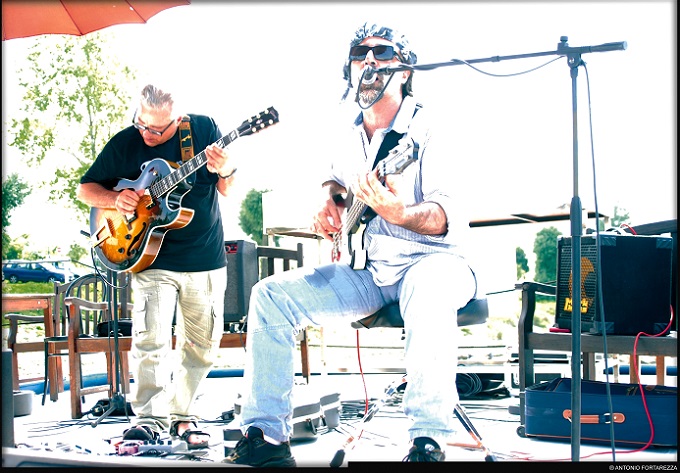 "Blues always travelled in a parallel way just as classical and jazz music, without being influenced by trends."

Max: I’d like to share with you an experience I had during the Italian tour with Gary Allegretto in 2009. Gary is a harmonica player coming from Los Angeles; he had also a busy teaching for more than 20 years. He founded and directs "Harmonikids", a non-profit organization that offers music therapy through harmonica lessons for children with special needs. I had the opportunity to play with him as a duo (stomp bass and harmonica) during his lessons at the paediatric oncology department of the Pausilipon Hospital in Naples. It was one of most impressive and hard to feel experience in my life, human as well as musical. With that smiling child I have tested on my own skin the miracle music can make on the human soul.

Freddie: In many years of music I’ve had many blues adventures. It’s hard to choose. I'd rather remember someone who - besides being a great artist - has proved to be a great person both on and off the stage. I remember with great affection Jimbo Mathus, Gary Allegretto and Charlie Musselwhite. It was great to spend time with all these musicians, sharing stories, laughing and joking, not only with the music. Last but not least I would remember my experience at the pedal steel festival organized by the Texas Steel Guitar Association in Dallas (USA) last march. That was for me one of the most important experiences as a musician.

Max: I miss a lot the better quality of the music. I’ve met many great blues musicians that - however - play music with low quality ideas. The worst risk for the future is the illusion that it’s enough to draw from the past and play cliquet to be appreciated as artists. This is the best way to lock up the blues in an “Indian reservation”, condemn it to a forced survival. Just old music for old minds.

Freddie: I really miss the old relationship between the artist and his musical instrument. It was so simple and clean before. 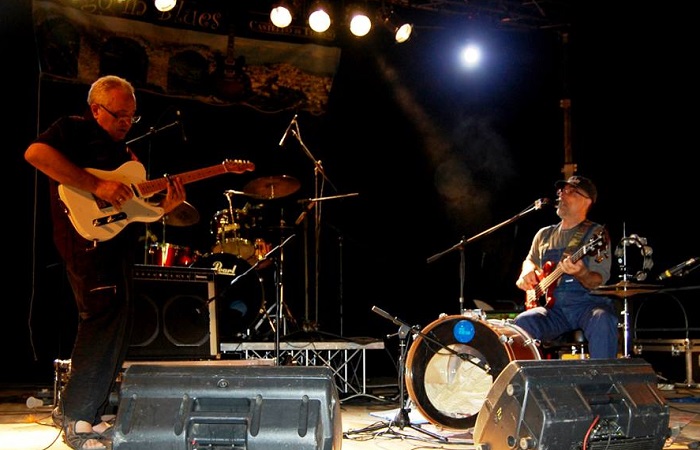 "The blues is the matrix because - more than other kinds of folk music – it has an unmatched expressive urgency and irresistible impulse: few chords, dance, sweat and magic."

Max: The blues is having in Italy the same crisis that is affecting all the popular music in the world: lack of renewal; pervasive and self-referential orthodoxy; general shortage of good ideas. After a period of light and good results (between the late 80s and early 90s), everything seems to have crystallized. It is also to add that a general crisis is gripping music with pulverization of listening and decline of the record sales. The invasion of the mp3/mp4 has created confusion in the listeners that are less and less able to distinguish good from bad music.

Freddie: I think there’s too much electric SRV blues style, sometimes it could be confused with rock music, which is itself a blues derivation. I honestly think that the best period of music, in general, was in the 70s. Blues always travelled in a parallel way just as classical and jazz music, without being influenced by trends.

Max: Although the historical and social aspects that have generated the blues have very little in common with the Italian culture, there is a root which is independent from ethnic groups. It concerns the ability of the humans to express emotions through music. Being geographically close to Africa, leaves us some better chance in feeling warmth and emotion. There would have been a good reason if Alan Lomax came to Italy in the 50s to record ethnic music matter throughout the peninsula.

Freddie: Blues comes from USA, and there always will be differences with Italian blues, in particular if it's sung in Italian.

What has made you laugh lately and what touched (emotionally) you from the local circuits?             (Photo: Warm Gun & Charlie Musselwhite) 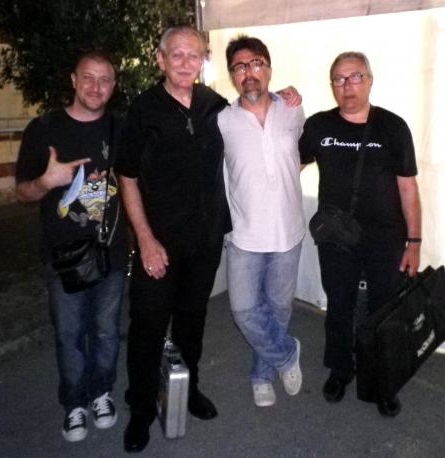 Max: Two important meetings of the national blues bands has been organized lately: Blues Made In Italy and South Italy Blues Connection. I’ve attended both with another project of mine (a sax, bass and drums band, called Rough Combo) and I always brought home good vibes. These kinds of events are excellent opportunities to meet, to discuss, and sometimes to clash about the blues, really good mediums for the growth and the evolution of the movement.

Freddie: I always find something interesting and valuable in any kind of honest music or artist. There is always something new to learn because music is a journey that never stops.

Max: I think we should stop feeling the music only as a commercial product and we should recover its cultural, social and playful function. So we will – perhaps - overcome the terrible times we are experiencing. Since all the certainties we have clung to for decades have failed, we need to save the sacredness that blues is still preserving.

Freddie: I would like to give more visibility to new unconventional music languages.

Max: I’ve played for years in conventional blues bands. It was during these experiences that I’ve developed the idea of the Warm Gun. It is a "two men band" in which we retrieve a synthetic approach to the blues, recathing the bony archaic style of bluesmen, who had not planned a career as musicians. The ones who have first felt the need to express their emotions through music, spending life playing in different situations: juke-joint, pic-nics, clubs on the street. They might have had the chance to play on “big stages”, but always regaining the road, with the will to live music and to never use it as a goal. The project realized in 2004, when I met Freddie who shared it in full and made it possible.

Freddie: It happened in 2004, when I met Max at a party. I was attracted, talking with him, by the possibility to play a minimal and immediate music. 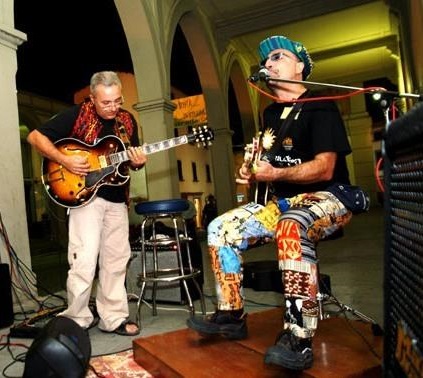 Max: I would like to live every day of the 50s Chicago. In those years was made everything that guides us today in making blues music. While producing any new idea we can’t deny what has sprouted in that fantastic and sparkling years.

Freddie: I really dream about going in any town on the Mississippi during the late 30s.