"Blues is a part of life ... everyone has them at one time."

Barry Richman is a great all around guitarist from jazz to rock to country, and has a wonderful collection of incredible instruments and amps and has played with everyone. His guitar playing is soulful without being clichéd, chops driven without being too technical and imaginative without being commercially pandering. Barry Richman is obviously a child of the 70's, fusing blues, jazz, rock and psychedelic. Here is an abbreviated list of the stellar players with whom Richman has already performed or recorded: Allman Brothers, Roy Buchanan, Eric Johnson, Jimmy Herring, Gov’t Mule, Eric Clapton, Les Paul, Buddy Miles, John Lee Hooker, Frank Marino, Charlie Daniels, Little Feat, Derek Trucks Band, Lynyrd Skynyrd, Al Kooper, Toy Caldwell, Clarence "Gatemouth" Brown, Lee Ritenour to name a few. Barry Richman, an Atlanta transplant from the Big Apple, can be seen performing his psychedelic blend of original music all over the Southeast. Traveling from one venue to the next festival or concert, leaving a following of fans and a crowd of locals hypnotized, mesmerized, and in awe with the lull of his melodious free sounding, and rockin' guitar. Barry spent time touring with his own band, which used to be called The Visitors, as well as a little time on the road with Wet Willie and Col. Bruce Hampton. However, he prefers to stay in the Southeast as much as possible, where he’s spent time developing his discography: “Moment of Now”, “Blues from Mars (I & II)”, and “Temporary Eternity”. Barry also released two limited edition CD's: The Live at The Darwin's Blues Festival is from an outdoor festival that he played with a side project blues band called The Well Hungarians. And “The Live at The Brandy House” is from a live Z-93 radio broadcast and features the 4 piece band that he had for a couple of years. Richman's original tunes are brilliantly written and exquisitely played.

I learned that I was able to express my feelings through music ... sort of a universal language that most people in the world can understand. Blues is a part of life ... everyone has them at one time.

How do you describe Barry Richman sound and songbook? What characterize your music philosophy?

My sound is a mixture of all my influences ... rock, jazz, blues and country. My philosophy is to always play from the heart and use music as a way to make people feel better. "I miss the honesty and realness of music recorded back before digital technology."

There's been many ... being on stage with legendary performers ... recording my solo albums ... hearing my music played on the radio ... touring in Europe!!! As for the worst moment ... that would be any night that something is not working properly with my equipment or a night that the audience is not responding to the music.

Wow ... there's been so many!!! Some of them are jamming with The Allman Brothers Band, Buddy Miles, Eric Clapton, Les Paul!!!

That would be to always play with feeling and taste and to be open to all kinds of music.

Are there any memories from Allman Brothers and John Lee Hooker which you’d like to share with us?

Seeing the original Allman Brothers playing at The Fillmore East. It was amazing!!! Playing with John Lee Hooker was a real lesson on how to play blues!!!

Which memory from Roy Buchanan, “Gatemouth” Brown and Toy Caldwell makes you smile? Roy was a very intense person!!! I remember when he gave me his Telecaster to play!!! Gatemouth was very laid back and a lot of fun to be with. I remember being on stage with Toy playing the Marshall Tucker song "Can't You See".

I miss the honesty and realness of music recorded back before digital technology.

I hope that the traditions of music will be kept alive by the new young musicians. My fear is that technology may put musicians out of work someday.

What are the lines that connect the legacy of Blues with Jam Rock and continue to Jazz and Southern Rock?

Well, everything seems to be connecting these days. I love how Jam Rock is a melting pot of rock, blues, jazz, funk, country, etc.

I would like for music to be less of an industry. A lot of artists are more concerned with making money instead of making great music. 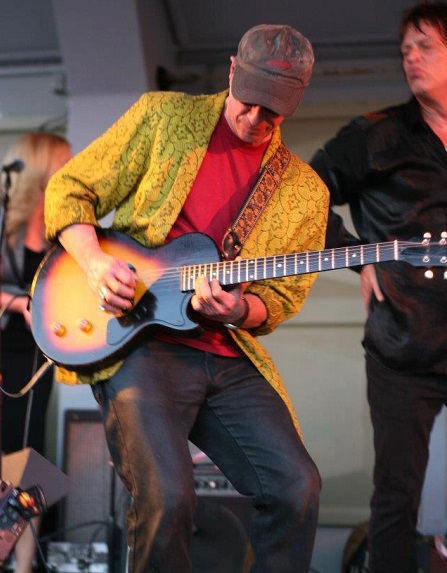 I love watching young children experiencing live music for the first time ... seeing them out there dancing!!!

"My sound is a mixture of all my influences ... rock, jazz, blues and country. My philosophy is to always play from the heart and use music as a way to make people feel better."

I would love to go back to 1969 and spend a whole day at the Woodstock music festival!!!