Interview with guitarist Michael Terry Spina, a St.Louis based artist with firmly rooted tradition in Missouri

"I miss the strip down rawness of the older guitar guys who played with so much feel, and developed their own style, I want to do that."

St. Louis based blues/rock singer, songwriter and guitarist Michael Terry Spina making his mark all over the world with digital and CD sales. He has sold product in such places as Belgium, Denmark, Austria, Italy, and Russia just to name a few. Michael is currently getting radio play all over the United States, the United Kingdom, and on several internet radio stations reaching audiences all over the world. He is enjoying performing his music in small clubs, festivals, outside concerts, as well as auditoriums. The Michael Terry group is the only act that has ever been asked to perform three years in a row on the steps of the Missouri state capitol for their annual cultural concert series, which has taken place for 15 years. 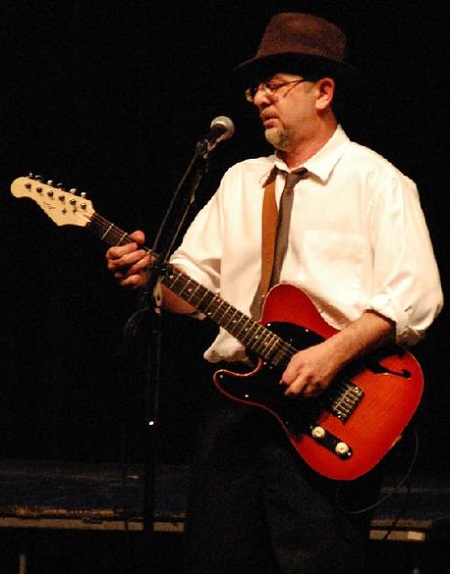 They performed at the legendary Rickman Auditorium in 2010 and 2011, headlining the benefit concert for St. Jude Children’s Research Hospital. While Michael is enjoying national and international sales, radio play, and regional touring success, his roots are firmly planted in Missouri, where he was born and raised. His songs are full of gritty, sometimes witty, soulful, heartfelt vocals and his guitar playing ranges from melodic to an “in your face” fiery attack with a hint of his influences shining through once in a while. On his latest cd, “Too Bad”, Michael had the honor of doing a duet with St. Louis legend Pat Liston, vocalist from Mama’s Pride. He also had the privilege of trading licks with the fabulous Rich McDonough, another St. Louis legend, on two songs. His original songs, in addition to his passionate presence in a live setting, tend to force the listener to be drawn in. one might say “you can feel the pain” in every word sang and every note played…

The group of musicians he plays with is comprised of 100 plus years of combined performing experience. As a result of their ability to really commit to the covers they perform this band will have you convinced they wrote these songs as well…

I learn that playing and singing the blues is all about feel, to me it’s about sharing your feelings with others, true feelings, it’s about being honest, and not self conscious, just letting it out.

I had a brain tumor and lost the hearing in one ear, but I am here, and I can still do what I love. 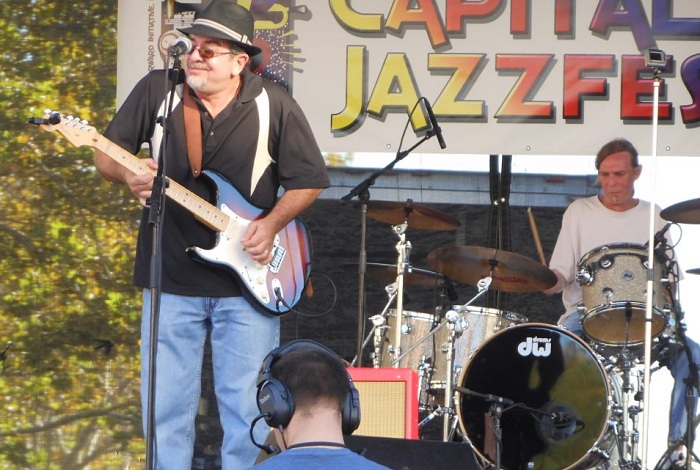 "St. Louis Blues had a lot of boogie, swing, and piano, and other influences, not as much of shuffle feels, just as a general observation. But being between Kansas City, Chicago, and Memphis, we had all the best of all of them rolled into a blend of our own..."

How do you describe Michael’s sound and progress, what characterize BagLunch Blues Band’s philosophy?

My sound is raw, in your face, passionate, less is more, but feeling in the notes played.

BagLunch Blues Band's philosophy is all about connecting with people, making them feel good, make them want to dance, house rockin’, hip shaking blues. We love what we do, and do what we love.

Most interesting period musically is when I got a record deal with an independent label. That was an amazing experience. The worst time for me was when I had surgery for my brain tumor and didn’t know if I would play again. It was a very scary time for me, and took a long time to heal. The best time probably was when I came back and started playing again and re-connected with fellow musicians and friends, Mike Edsel on drums, and Steve Lossos on bass guitar. They are an amazing rhythm section, and I love playing with them.

People connect with what is real, and people can relate to the blues. It connects with the soul, and it comes from the soul… 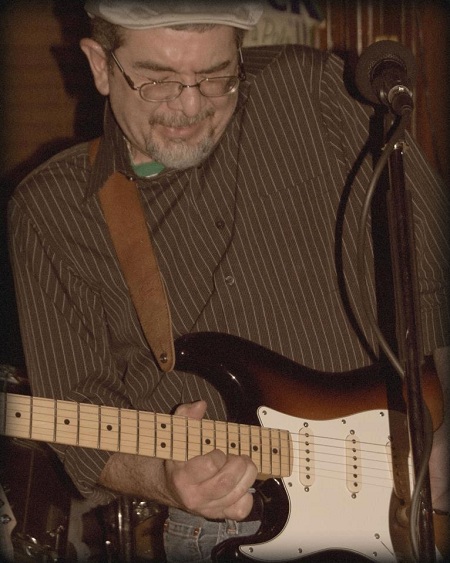 I got to jam with the legendary James Crutchfield, he has played with the best, Muddy Waters etc.

I also got to jam with Gus Thornton who played with Albert King, and can be heard on Albert King and Stevie Ray Vaughan’s In Session recordings. I’ve played many memorable gigs; a couple favorites would be playing the “Vet Jam” some years ago in St. Louis, such a great turnout. Also playing on the state capitol steps in Jefferson City, Mo. Beautiful setting. Every blues festival I have played is amazing, people gather to share the blues that is truly. An experience hard to put in to words.

Any time I meet someone who has played the blues for a living I get to hear their stories, that is always important to me. When I met Gus Thornton who played with Stevie and Albert King and he said, “ Man you can play that thing” I almost lost my mind…the best advice I have been given is to take everything you know about your instrument and throw that away, and just play….

On my solo album, Michael Terry, Too Bad, I did a duet with Pat Liston from a band called Mamas’ Pride, they were very big in the 70’s. That was such an honor, he had played with the likes of Lynyrd Skynyrd, Allman Brothers, Charlie Daniels, Marshall Tucker…and on and on. He has one of my favorite voices ever..I had so much fun recording with him.

Make an account of St. Louis Blues. What are the differences between St. Louis and the other local scenes?

To me St. Louis Blues had a lot of boogie, swing, and piano, and other influences, not as much of shuffle feels, just as a general observation. But being between Kansas City, Chicago, and Memphis, we had all the best of all of them rolled into a blend of our own... 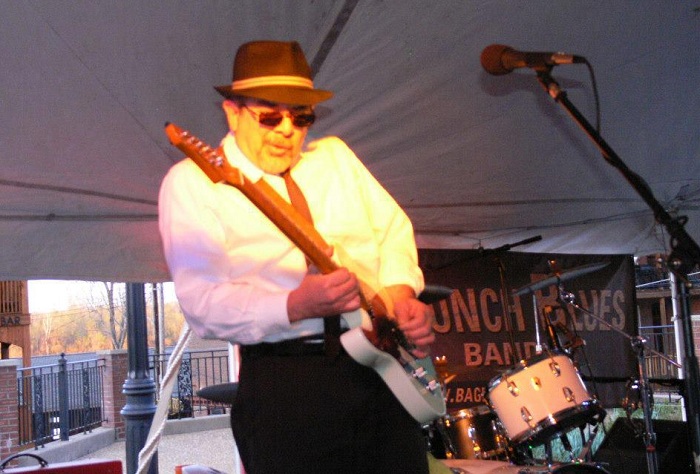 "I learn that playing and singing the blues is all about feel, to me it’s about sharing your feelings with others, true feelings, it’s about being honest, and not self conscious, just letting it out."

I miss the strip down rawness of the older guitar guys who played with so much feel, and developed their own style, I want to do that. I want to develop a style of my own so when people hear a note or two they know it’s me…that’s my hope for the future, and also share our music with as many people as we can.

What has made you laugh lately and what touched (emotionally) you from blues circuits?

Being with my family at Christmas made me laugh and smile a lot lately, and I would say watching videos of some of the players we’ve lost, like Gary Moore, etc. touches me and saddens me.

I would love to go to Chess Records, when Willie Dixon, Muddy Waters, Howlin Wolf, Little Walter and so many others were at their peak and recording there. I would love to hear them create those old songs and just listen to their conversations…

What's the legacy of Stevie Ray Vaughan?  If he was speaking seriously to us, what do you think he would tell us? 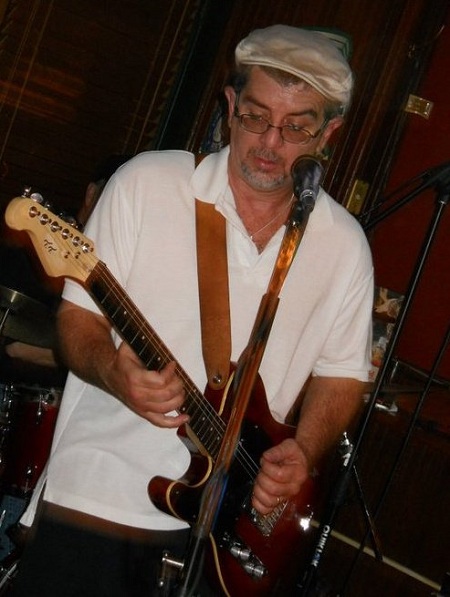 To me Stevies’ legacy is taking the stylings of some of his favorite players and injecting his own feel into it, his greatest gift to us is showing us how it’s done, let go and let it flow, he was a vessel, and the blues flowed through him like water through a stream.

"My sound is raw, in your face, passionate, less is more, but feeling in the notes played."

What are the differences between Strat, Tele and Les Paul? What would you like to ask Leo Fender and Les Paul?

The differences between these three guitars to me are; the Strat and Tele have a longer neck scale, they feel different to play than a Les Paul, with a shorter neck scale. Then you have to factor in the types of wood used, and the pickups. They all have characteristics that make them very unique. The Strat, with its bell like tone, the Tele with its twang, the Les Paul with its sweet sustain. I love them all, and play them all; I think the type of guitar is least important. The fingers, heart, and soul matter the most.