"Blues is human emotion conveyed through a simple form of music. Everybody can relate to that."

Sugar Ray Norcia is a soul blues singer and harmonica player. He is best known for his work with his backing band, The Bluetones, with whom he has released seven albums since 1980. Norcia started to play his harmonica based blues at high school. Once Norcia had relocated to Providence, Rhode Island, he formed the Bluetones which secured a residence as the house band at a local nightclub. They backed touring acts, such as Big Walter Horton, Big Mama Thornton, Big Joe Turner and Roosevelt Sykes in nearby clubs. During the latter part of the 1970s, the band backed Ronnie Earl before he departed to join Roomful of Blues. Norcia's solo recordings included the EPs Sugar Ray and the Bluetones (1979); Ronnie Earl and the Broadcasters featuring the Sensational Sugar Ray (1982), plus a couple of releases on Rounder Records, Knockout (1989) and Don't Stand In My Way (1991). Don't Stand In My Way was the first release by the Bullseye Blues label. The Bluetones also backed Miki Honeycutt on her initial album, Soul Deep. In 1991 Norcia himself joined Roomful of Blues as their lead vocalist. They issued three albums with Norcia and undertook extensive touring duties. Norcia also undertook work away from the group. He appeared on a Bullseye Blues album from trombonist Porky Cohen, Rhythm and Bones, (1996) and on the LP Little Anthony and Sugar Ray: Take It From Me, (1994). Also in 1994 Norcia appeared on Otis Grand's Nothing Else Matters album.

In 1998 Norcia exited from Roomful of Blues, and issued Sweet & Swingin', which featured songs written by Hank Williams, Arthur Alexander and Big Walter Horton; plus a guest appearance from The Jordanaires. In 1999 Norcia participated with James Cotton, Billy Branch and Charlie Musselwhite, on the Grammy Award nominated album, Superharps. More recently, Norcia contributed his harmonica playing on records by Pinetop Perkins and Doug James, in addition to touring along with the 'Sugar Ray Norcia Big Band'. In June 2011, Sugar Ray and the Bluetones released their eighth album “Evening” on Severn Records.

How do you describe Sugar Ray Norcia sound and progress? What characterize your music philosophy?

I am more of a crooner than a blues shouter. I like melodies and songs that might tell a story. Above all, I have fun writing, and playing music!

What do you learn about yourself from the blues? What does the blues mean to you?

In life I sometimes keep feelings to myself, BUT when I write and perform I find it is easier to express myself. You just have to deal with what life throws at you. Sometimes things are good and other times not so good.

"For some unknown reason New England has been a breeding ground for great blues and jazz players."

The harmonica was available to the slaves and field workers in the late 1800’s after the civil war. It was inexpensive and emulated the human voice so it is a very expressive instrument.

In the 1990’s I spent 7 years as front man for Roomful of Blues…. A horn driven jump blues Band. We played about 250 dates a year, all one nighters! At the time is sometimes a very grueling schedule but looking back on those days I realize it was a fantastic experience.

Blues is human emotion conveyed through a simple form of music. Everybody can relate to that.

Sitting in with Muddy Waters was really great. After the show we were all in the dressing room and Muddy said to me” now son that’s how the harmonica is supposed to be played! “I was thrilled.

Early in my career we backed up a lot of great bluesmen like Big Walter, Joe Turner, Otis Rush and many others. Rooselvelt Sykes was the first to really encourage us to make recordings. "I am more of a crooner than a blues shouter. I like melodies and songs that might tell a story. Above all, I have fun writing, and playing music!"

We once played a gig during the day for a junior high school with Big Walter Horton. My son was with me. He was only about 4 years old at the time. Walter sat my son on his lap and said to me...”I’ll take care of the boy, now you go get me a half pint.”

From the musical point of view what are the differences between: New England from the other local scenes?

For some unknown reason New England has been a breeding ground for great blues and jazz players. I could list dozens of musicians from this area who have made a mark in the jazz and blues world.

I might like to be sitting in with a swinging band in some juke joint in say Kansas City in the 1940’s or 50’s . Then again, it would be cool to be sitting at a front table somewhere in Chicago watching Little Walter play his hits and he’s on fire! 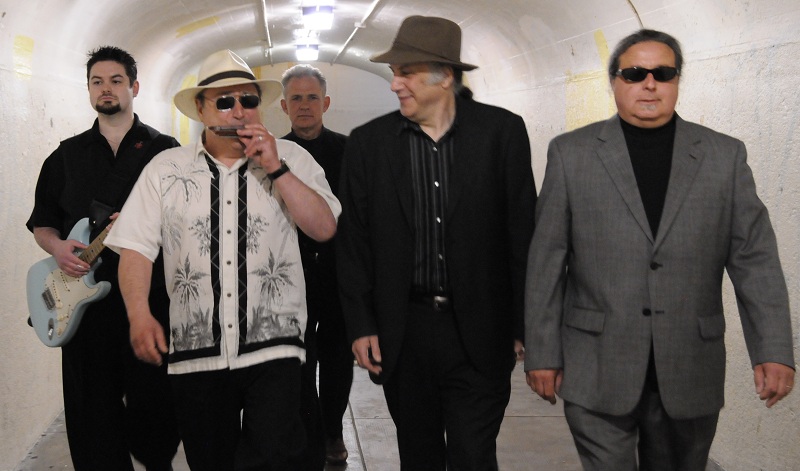