Interview with Michael Martin and Cindy Adams of Blonde Blues, stretching the boundaries of the Blues

"The ups and downs of life, the joys and sorrows are always with us. Whether traditional, rock, country, or jazz blues, life and how we deal with it keeps blues running through music."

The evolution of Blonde Blues, came about through a time of trial and error, hope of possibilities, and a need to leave something significant of themselves. Michael Martin, manager/promoter and drummer/bass player, started the band specifically with Cindy Adams in mind. Her mainstream/gospel background, and her song writing that always tells a story, was perfect for the Rock/Blues genre. 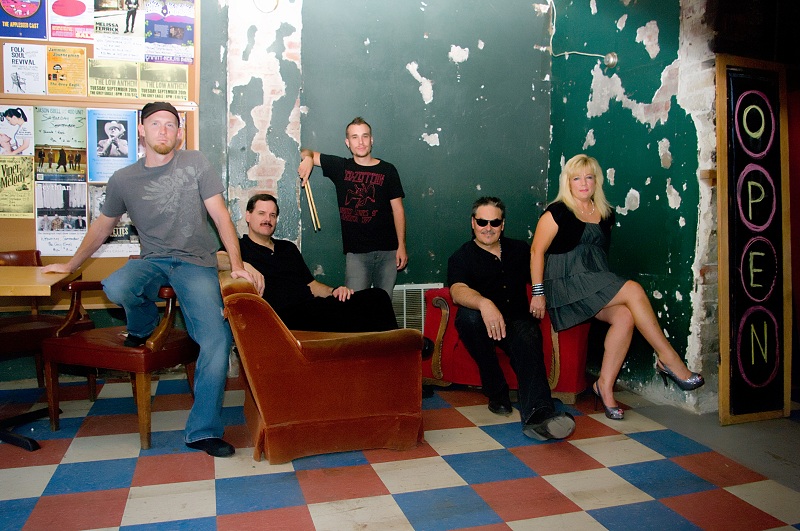 The band started out a foursome, Cindy Adams - vocals, Michael Creech - guitar & vocals, Michael Martin - bass & vocals, and Marty McCall drums. This worked great, putting a special spin on unique covers with Cindy’s strong vocals and Michael’s guitar driven leads. Cindy was inspired, she had the band to make her original songs came to life! Just when all was going forward, 2 live CD’s produced, life curcumstances forced the band to replace Michael Creech and Marty McCall. Having to use different guitarist set the band back and keyboardist, Rick Siller, with a tremendous blues and jazz background. With Ross Osteen on guitar & vocals and Spencer Wynn on drums, the band embarked on their first studio release. Under time constraints and drummer Spencer moving to California, 11 songs were recorded at Blantone Music studios in one day! A special project came to life, a mix of traditional and rock blues, with a little mainstream feel. A new Generation of Blues, “Envision Nu Blues”!

The current band is made up of differing ages, which brings the past and the present together in an unusual way. There is no lack of energy with Jeff Lott on drums, and Jeremy Smith on guitar & vocals. Both are music majors and bring a great influence of the present music scene. Blonde Blues next CD is in the works, with more stories from Cindy and preserving the traditional, yet stretching the boundaries of the “Blues”!

When was your first desire to become involved in the blues and soul music?

Cindy: As a teen, I loved to sing Stevie Wonder, The Platters, Etta James, and Bonnie Raitt. The sounds drew me.

Mike: My first desire of the blues came when I realized how many great artists were inspired by the original blues artists. Elvis, Beatles, Rolling Stones, Eric Clapton and of course Led Zeppelin.

Cindy: I see myself as a vehicle for revving up the Blues. To keep them moving forward so as to draw young people to a storytelling genre.

Mike: Being a drummer and bass player myself, I appreciate the encouragement of the blues groove between the bass and drums. Throw in a little "Rock" and it was a natural. 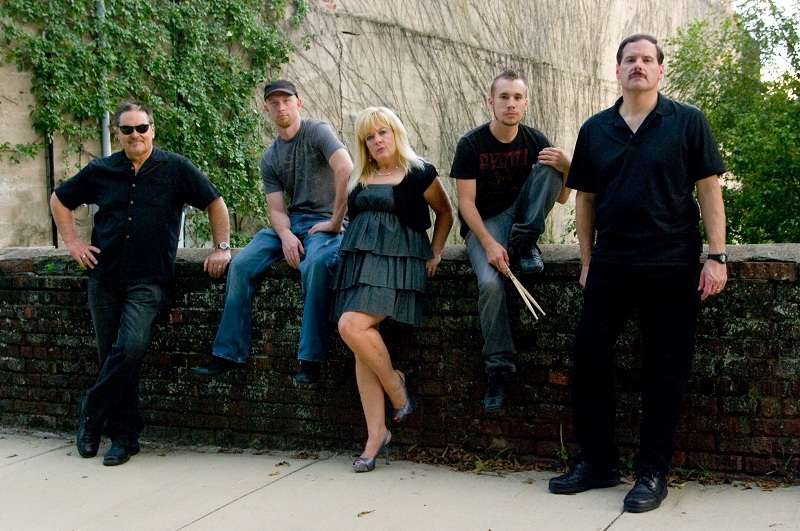 How do you describe your sound and what characterize band’s philosophy?

Cindy: Our sound is powerful and rock-infused stories of what life throws at you. We all bring to the band a different set of life experiences that keep it fresh.

Mike: "Blonde Blues" is a blend of Rock & Blues! A great respect for the original blues greats but encouraging meaningful lyrics and a little Rock Energy.

Tell me about the beginning of Blonde Blues. How did you choose the name and where did it start?

Mike: I originally was managing an instrumental band and we had the opportunity to have Cindy come in on some songs. I've known her for a long time and the spark was ignited. I Love Cindy as the front person and was able to convince her she was a Blues/Rock natural. The name "Blonde Blues" was a natural! Don't you think?

Cindy: Music is very competitive, and secrets stay just that. Secret. My mother had an exceptional ear in singing and instruments. I learned so much from her.

Mike: Secrets about music? Good question! I have tried not to be jaded by the industry standards. There's nothing like fresh, new perspectives and quality talent. I encourage that! 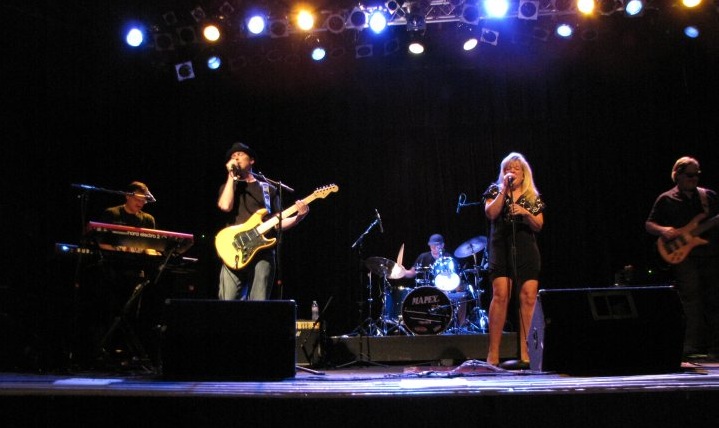 Cindy: What a thrill to hear a song that I wrote on the radio! To see it in video form is so rewarding. I had a performance that had to go on, and I had a terrible head cold and noooo voice.  It hurt my throat so bad!  Had to do it anyway.  I wouldn't advise a person to do that ever.

Mike: There's nothing like performing in the "Best" music venues in the US! The worst moment was when I had organized a 1 week tour with "Robben Ford", the final show in the 3000 seat, Ruby Diamond Concert Hall in Florida State University, got canceled. Very disappointed!

Cindy: You really need to know who you are and what is coming out of your soul when you write or play.  You can't be someone else.  You have to find your audience and own who you are. Some money is involved, but joy of a song coming to fruition keeps you doing it.

Mike: I would encourage aspiring musicians to concentrate on their product, not getting the gig.

Are there any memories from Robben Ford and Mark Arnold, which you’d like to share with us?

Cindy: We had an incredible tour planned with Robben, but alas he got tied up and had to cancel.  It was so disappointing.

Mike: I enjoyed performing and having Mac Arnold in many of my shows. Him and I organized a "Muddy Waters" re-union performance, which included guest that had been in Muddy's band. Kim Wilson (Fabulous Thunderbirds), Willie "Wide Eyed" Smith, Bob Margolin, and naturally Mac, the original bass player for Muddy. A great night and it was all recorded. 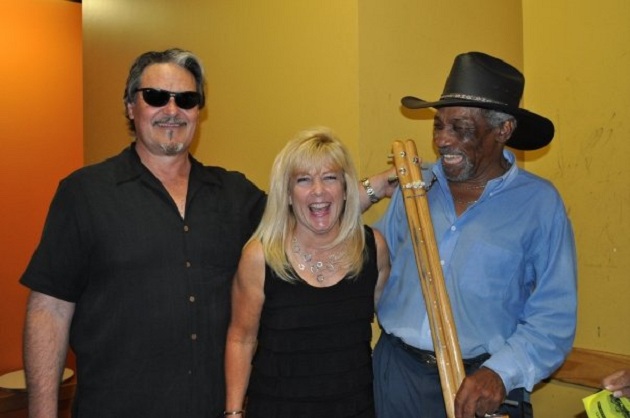 What's been their experience from recording time? Do you remember any funny?

Cindy: You feel a bit of pressure when you record as the outcome means so much to you. We all were so serious as the money clock ticks away. We went in as prepared as possible

Mike: Recordings for me have been a little difficult, everyone under a time schedule! I look forward to Blonde Blues next CD this summer; I am determined to take more time.

Cindy: We were part of a large stage performance of famous and not so famous Blues greats. They were filming a documentary and it was wonderful to be a part of it all.  We recently did a 3 day tour with Matt Schofield that we really enjoyed. We had to drive through a snowstorm to get to the last gig.  We got there just in time for sound check and all went well that night.  Had a lot of musicians in the crowd and they responded happily to the show.

Mike: I really enjoyed Matt Schofield this winter. He will be the next blues great and we got to spend some good quality time from the shows! Of course, the Muddy Waters Reunion was pretty special! 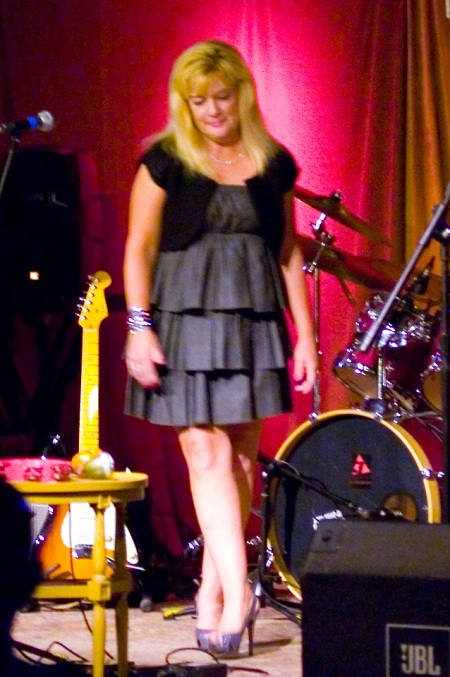 Cindy: When I see the audiences faces smiling and interested, bodies moving in time and singing, It makes me sing with joy and power. I love telling them stories of what I have seen.

From the music point of view what are the differences and similarities between Blues, Soul and Rock?

Cindy: Blues come from a very hard period in history.  People looked for some kind of outlet to ease things. Gospel songs motivated hope and deep thought. Soul music had a different feel and movement.  You either got soul or you don't. Rock music brought power and new sounds to blues.  The stories expanded and you seemed to go to another level even if it was sad.

What are you miss most nowadays from Grace Slick, Stevie Nicks era and old time of Blues Rock?

Cindy: Rock is in a funny place right now.  It seems to have gotten lost a little, at least here in the states. I love rock mixing up blues with power, a story, and passion that flows from the band, and singing from my head to my toes! I need songs to mean something, to cause a change, and yeah..... to set the skin on fire.

Cindy: The ups and downs of life, the joys and sorrows are always with us. Whether traditional, rock, country, or jazz blues, life and how we deal with it keeps blues running through music.

Mike: The "Blues" have proven to be behind most popular music! Almost all artists have been influenced by the "Blues". The simplicity of design and able to make a point with the lyrics, and top it off with some great musical solos and vocals. I just got "goose bumps"! Sorry, I love music!