"The folk music is a public music, which is down to earth and loved by everyone"

Muzammil Mullaji: From Earth To Soul

Muzammil Shabbir Mullaji was born in Khed Maharashtra Dist- Ratnagiri (Konkan), India. He's an Indian Pop, Rock, Folk Singer-Songwriter, Harmonica player, solo artist, who naturally devoted to music, he started learning music from 2009, suffering problems and working hard by preferring several self-practices of vocals inspired by listening Gazal King like Gulam Ali Khan, gold voice Mohammad Rafi Childhoodly, he was quit interested in folks music but in fact his voice quality was mostly suitable for - Western classical, pop, rock genre, so he started to follows music along with education and study at Mi Hajwani Welfare association – Al Madina English medium school, he was only boy in his village who had ability for creating a great kind of music but no one believe and care his musical talent get punished badly from a teacher while humming melody in classroom and faced more private problems. 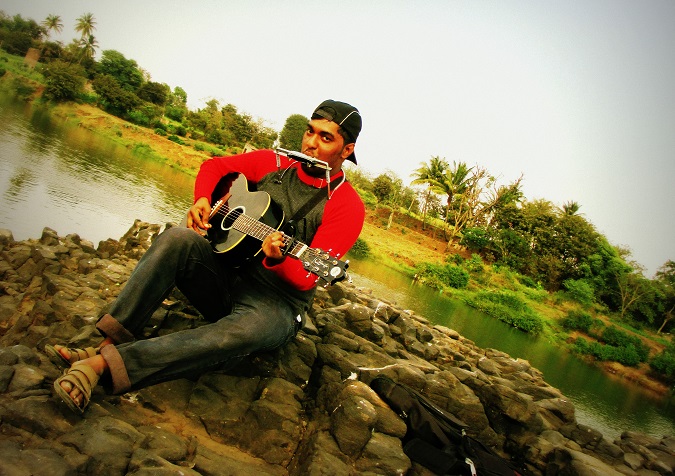 So, he moved on to Karad - Satara for perceiving his dream related to music on 2013. After moving in Karad he learn to play multiple types of western musical instruments like keyboard, harmonica, guitar by self-practices not taken any formal training, just god gifted and daily attend jamming with the music teacher Jivek Lade known for (Jivek music classes) and performed with extremely talented independent folks guitarist Mukesh Raokhonde and had meet with one of a successful artist of old Bollywood music industry, the HMV artist – harmonica maestro - Madan Kumar Sharma. At month of November 2014 the god send one Angel for Muzammil who support him as possible  for demonstrating his work toward the world music market and that person also known as Asydej, who is Tamil born singer-songwriter, rapper, record producer, r&b hence their collaborations will be announce soon an it will be available on youtube.

How do you describe Muzammil Mullaji sound and songbook?

Good question, I basically sound pop, rock, folk style my song is based on my past and daily life experiences for example – (love) composing music related to the topic of love is very interesting subject for me and also for every musician and poets, my music theme is a blues of love, I started to play harmonica from 2012 when I was 18 year old inspiring by listening ‘’Bye Bye Birds’’ on harmonica played by Sonny Boy Williamson I like to play a romantic tune on harmonica it’s a kind of silent blues.

Oh well, I say my music genre sounds pop, rock, folk, pop describes the whole story in a song. The rock describes the emotions and feelings or a kind of soothing sound which closest to our heart and soul and which can also make you cry or sensitive and well all folks keeps them alive in this entire world of music.. coz folk is from down to earth 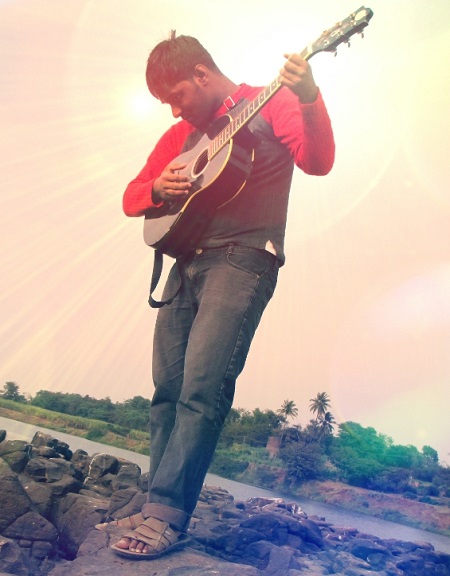 Yes, my first performance was in 2013 at my village Khed, Ratnagiri (Konkan region) festival I used one of my favourite gear and it is so use full that is “Tower” (Chinese chromatic harmonica) gifted by my brother on my birthday.

I played the song Jeena Yaha from old Bollywood film Mera Naam joker that night was memorable night for me lot of people support me coz I was a first person from the small village who learn to play harmonica by self-practices, without notation only by ear, no tutorial it was just like a god gift. My second music performance was in 2013 (revivalism 2) in Secab Institute of Engineering & Technology. I was invited there as guest, its located in Karnataka State in Vijayapura (Bijapur) historical city, I jam on there, three nights on stage using chromatic harmonica and done acoustic performance (vocal/guitar).

At 2014 I had visit to meet a Indian harmonica maestro Madan Kumar Sharma (HMV - man with the silver harmonica) who play harmonica in Indian music industry well he is my harmonica idol it was like a dream to jam with the famous person and we both played a harmonica duet and I dedicates a simple song for him “Yaad Kiya Dilne” he listened my harmonica skills carefully he given me good wishes that one day I will be well known harmonica player of India.

Madan Kumar Sharma (HMV artist) given me an advice that Muzammil remember the word now I’m going to say you (“practice make man perfect”) so keep practicing more you practice more you polish your skills and at the end it will shine like diamond it is the best advice he ever given me.

What do you miss most now a days from the music of past?

I miss the folk concerts and live performances of Bob Dylan and Don McLean and strings orchestra as well as the harmonica melody of Jerry Murad and Larry Adler also Memphis & the beautiful melodized western opera and Indian classical music nowadays. 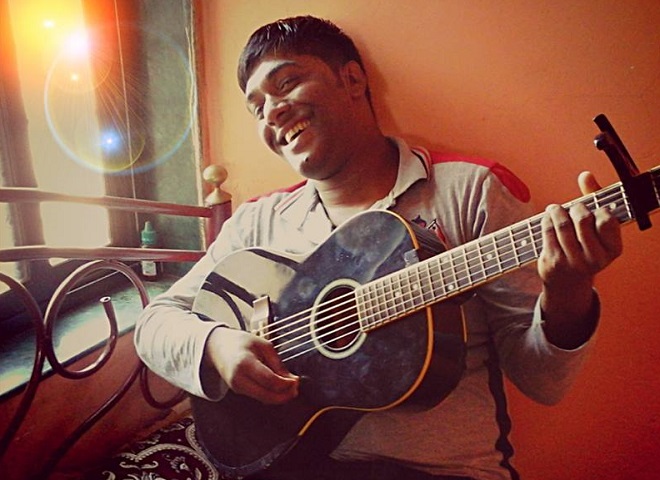 My hopes that an old indie, alternative, blues & classical  should be played the great role in this modern age and this style must be used by upcoming musicians too because these are the roots of music groove and from where the different types of music styles are born. I had some fear coz now a days the people are forgetting one tiny instrument that’s we call harmonica this instrument getting less demand and less support in music field now a days people think this instrument is a kind of toy its means availability and requirement of harmonica is dying nowadays in music market.

The music composers and producers are using the electronic production they are creating sound of harmonica saxophone, violin, viola, trumpet, flute etc. with the help of synthesizer or keyboards in short line, that is keys the independent harmonica players are facing the same problem they are not getting any respect or any chance to record their material and also getting a less publicity in this modern age if this gone continue likewise then the  harmonica music will die soon! And it will create a huge problem for an upcoming harmonica artists in future.

Well I would like to see the publicity and respect paid to classical and folk harmonica artist economically and also by popularity like Sonny Boy Williamson, Little Walter, Larry Adler gained.

What are the lines that connect the legacy of folk blues rock from United States and UK to India? Well great crowd ness of multitalented indie artists of music industry on Indian stages with full of peace and love were well received in India.

The local music circuit in Goa, India. There are so much pop, rock, blues bands and singer, songwriters auditions and shows but because of business I can’t able to go there for jamming with them anymore.

Are there any similarities between the folk blues roots and the genres of local folk music and forms?

Similarities between the folk blues roots, well the folk music is a public music, which is down to earth and loved by everyone. Well, I say it will be alive in this entire world of music. And about a blues it just sound of heart and soul it has some kind of issues but it’s totally different from folk. Blues is comes out by bending of diatonic notes naturally.

Ahaha... nice question, if this could happen I would want to go to the time of old music era of course I often USA to jam on with my favourite songwriter and harmonica player Bob Dylan and live with Don McLean when they both were young on a stages of New York and California. I would like to go Africa in a black community for playing harp with Sonny Boy Williamson, a blue song “Sky is Crying”, I miss those all days, because the old era was an gold era there was a whole movement which we don’t have in this modern age.

Make an account of the case of the folk/blues/rock in India? Which is the most interesting period in local scene?

60’s blues/rock was new born genre influenced by English music legends, American music largely published from Europe to India (Asia) passing through Turkey. That’s was band “The Eagles” and “The Beatles” and well people loves Afro-American music, because it has an fresh and new catching flavour. 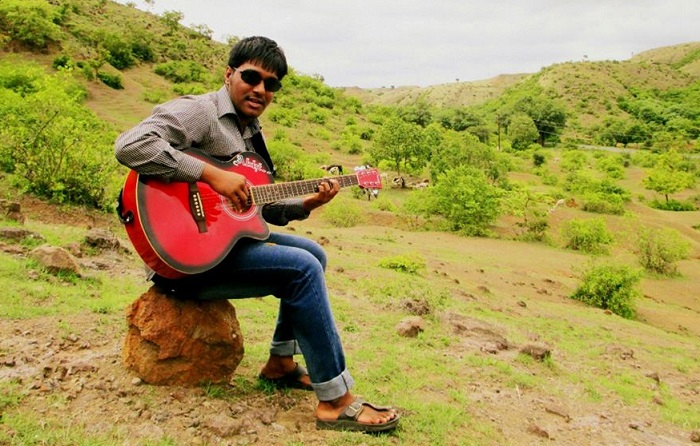