Interview with newest funky diva Queenie McCarter, a growing and notable presence in the blues world

"The blues continues to generate a following because after a while no matter how lucky a person is in life or how privileged their existence; they will experience hurt and pain and seek a remedy to fix it."

Queenie McCarter: Her Majesty of Blues

Queenie (Susan) McCarter-Wade is the front woman and band leader for Queenie and The Blue Cats, an award winning band that enjoy playing blues and a whole lot more. Queenie has staked her claim as the newest diva on the Madison blues scene. With Gospel roots from her native Chicago, Queenie delivers a powerful take on her style of blues. Her accessible, engaging stage presence immediately draws blues fans to her. 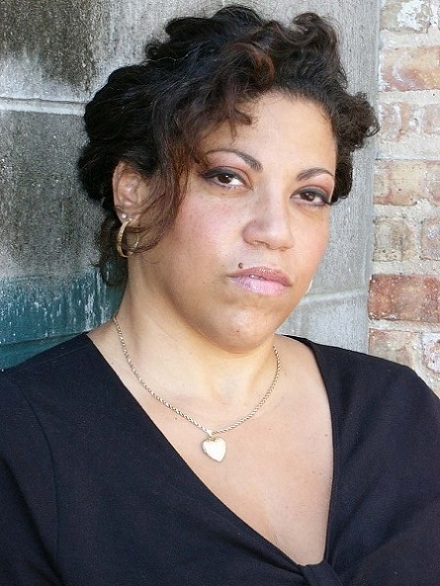 She is joined by Blue Cats: Bob Deutsch (lead guitar), Bill Cheadle (drums), and Scott Lukomski (guitar). Queenie and the Blue Cats hit the Wisconsin blues scene full throttle in 2005. Described as playing "blues so tasty you don't need no sauce", Queenie and the boys quickly built a following playing at many blues clubs and festivals in the area, and won the 2007 and 2009 MAMA Awards for Blues Album of the Year for their debut CD, "Live at Milo's Place" as well as for their second CD "Another Blue Day". The band was also honored with nominations for Entertainer of the Year, Blues Artist of the Year and Cover Band of the Year and was awarded the coveted Blues Performer of the Year award in 2009. Funky Queenie delivers powerful renditions of blues standards while having fun with her audience.

I have learned that the blues heals. It gets our problems out in the open an lets people know we as artists are going through the same things that they are, that in spite of the differences in one person’s life from the next person, that we all share similarities deep inside.

How do you describe Queenie sound and progress, what characterize Blue Cats philosophy?

When the band started out, we all just loved the music and wanted to share it and have fun. We played covers of popular blues, and blues rock songs and touched on R&B and funk to keep our crowds dancing. As our fan base grew and we were offered better and better opportunities we had the need to write and create more of our own music. Through this, I discovered how to showcase each band member’s strengths. 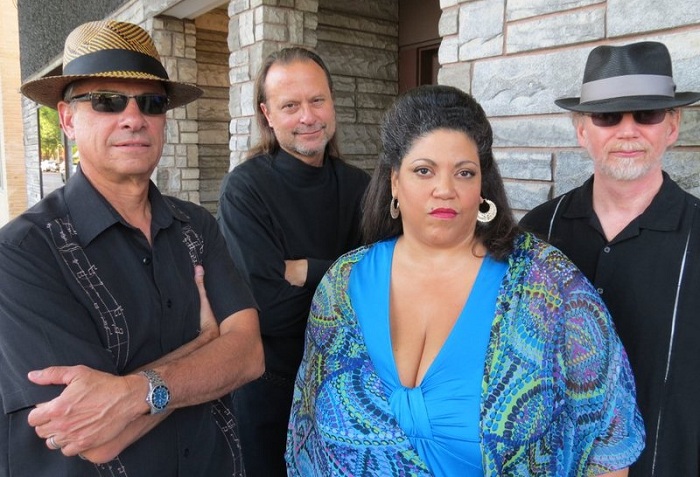 "I have learned that the blues heals. It gets our problems out in the open an lets people know we as artists are going through the same things that they are, that in spite of the differences in one person’s life from the next person, that we all share similarities deep inside."

Winning awards and getting accolades from the music community has of been course lovely but the best moments in my career were when I realized how much joy I was bringing to my audience, those times when I took the stage and knew the audience could feel everything played or said. The times when a performer is one with their audience are transcendent. I can’t really say there have been any low points for me musically. As for the most interesting, well each time I am honored with a request from another blues artist to share their stage I am learning about their blues, just like going to school sometimes. We are never too old to stop learning.

The blues continues to generate a following because after a while no matter how lucky a person is in life or how privileged their existence; they will experience hurt and pain and seek a remedy to fix it. Many have their own idea of what the music should contain or sound like but all share the same human feelings.

I used to be part of the house band at a jam AJ Love hosted years ago. We always had a touring professional musician come by as our special guest and having the opportunity to witness talent on that level was amazing. Being able to sing with people playing on such a high level and to hear the stories they would tell of their adventures are moments I treasure. As for memorable gigs, well there have been many of those. Some of my favorites have been the big blues festivals where there are lots of other bands playing and here of late, the Orton Park Festival in Madison, Wisconsin where I played with John Primer and AJ Love on guitar, Jimi Schutte on drums, Martin Lang on harmonica, Hanah John Taylor on saxophone and Dave Wood on bass. It was billed as “The Chicago to Madison Blues Jam” and the group had not played together before, there were no rehearsals, we just took the stage and played the blues. It was truly magical.

How would you describe your contact to people when you are on stage? What is the story behind the “Queenie”? 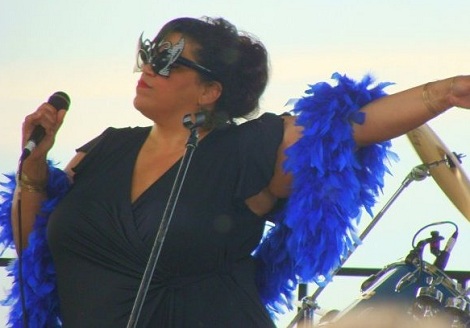 When I am on stage I am just myself and I never try to be anyone but me. Onstage I share the deepest part of my soul with the crowd and am told that people are able to relate to that. There is no story behind the “Queenie” It means “Little Queen” I have been groomed as a “Little Queen” since birth according to my mother so it just came naturally. It isn’t always easy being Queenie but as long as I am above ground I will do it with grace and style.

Over the years I have met and shared the stage with many blues greats and value all of those experiences equally. I have also had the opportunity to get to know some of my fans personally and those friendships are invaluable. Let me put it like this, if I meet you, we are going to be friends and I am going to appreciate that. Always. The best advice I can give anyone is to remember that the same people you run into on your way up are the very same people you run into on your way down. Always treat everyone with kindness and respect.

What are the differences between Wisconsin, Chicago and the others local scene?

Interesting question, for me the main difference between Chicago and for much of Wisconsin is that through the miles and reinterpretations of the younger generation, the music gets watered down. People really need to go all the way back to the root of the music, the field hollers of the black slaves in America, the cries of despair and the gospel choir laments where some tried to shake it all off. If they really want to learn about traditional blues they need to listen to and study the music of the innovators that came before them. They need to carefully listen to the phrasing and dynamics of those old recordings and have a discerning ear to know the difference between that and some of the material that is produced today. Certainly a person can have their own style but once certain key elements are removed, it is no longer blues. Many of the local bar band musicians that attempt playing blues nowadays are quite unfamiliar with the genre and miss out. The Wisconsin blues scene is full of flashy, “shredder” type guitar players who don’t know the difference between blues and rock and roll. Chicago is a different story entirely. There are so many talented musicians in Chicago carrying on the true blues tradition. With such a high concentration of outstanding blues musicians living there, if a person wants to play in a real blues club, well they better know their stuff! I wish there were more clubs that booked blues because back in the day if you played blues well you were going to be able to work. I hope more people embrace the blues and that someday the blues artists will get the recognition musicians in other genres have enjoyed.

Well you know they call Kenny Smith “The Human Metronome” His timing is impeccable and he has the warmest most welcoming personality ever. Whether working in the studio with him, taping a television segment or doing a live show, he is on time, all the time and just a great guy. Paul Filipowicz is a blues man to the core and someone I would trust my life with. He is a masterful guitarist and harmonica player and an amazing human being who taught me a lot about the music business. He will go out of his way to help another person and when he takes the stage by golly you know that man has the blues! Billy Branch is a busy, internationally touring musician but he never acts that way. He is always kind and no matter how tired he is, he will take the time to offer advice or chat, same with John Primer, an excellent guitarist and vocalist who always treats everyone like family from the musicians on stage to the fans in the crowd. Tom Holland is great too, some of the most fun I have had is at his shows, he is funny and gracious and sharing the stage with him is always a pleasure. He has accomplished a lot and in spite of that, he is humble and decent through and through. Each and every one of those guys are true professionals.

"In order to be a blueswoman you have to know your craft. You have to be well versed in everything from the structure and creation of the music to the marketing of the finished product. If a blues woman is confident and respects herself, there will be no problems with the men folk giving that same respect." (Queenie with Billy Branch (Left) and Paul Filipowicz (Right) / Photos by Faye Kufahl & Susan Webb-Lukomski)

Real blues certainly exists today and there is nothing more powerful. There is no other genre that can move and unite people the way real blues does.

In order to be a blueswoman you have to know your craft. You have to be well versed in everything from the structure and creation of the music to the marketing of the finished product. If a blues woman is confident and respects herself, there will be no problems with the men folk giving that same respect.

Hmm, well let’s take that time machine way back to around the time Howlin’ Wolf and Muddy Waters were in their prime. Maybe have a studio session over at Chess records in Chicago and then head to Theresa’s for a set with Junior Wells and Hubert Sumlin and then head on over to another club for a jam with Buddy Guy. I have a feeling if this time machine broke down there and I was stuck that would be okay. I would never come back! 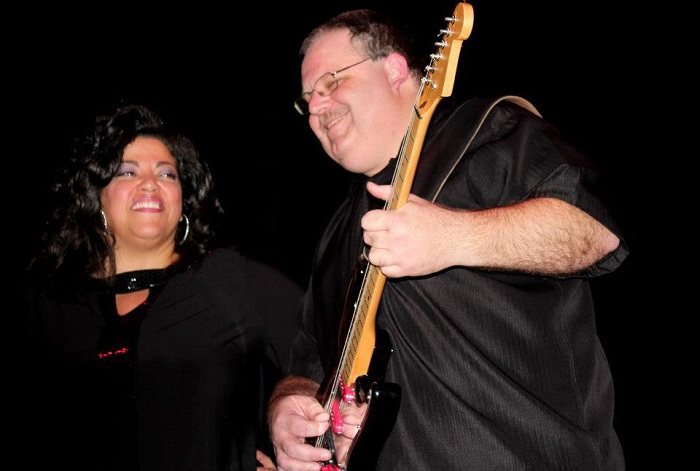