"You have to remember that the blues was created as a personal musical expression by a basically non-literate culture. It is the sound of the human heart, the song of the spirit. I think that today we need the blues more than ever."

Non-stop blues advocate and activist Shrimp City Slim (aka Gary Erwin) was born in Chicago. Gary is a keyboard player/ singer/ songwriter and purveyor of Lowcountry blues and original songs based in Charleston, SC since 1983. In 2014, he celebrated twenty-seven years as a full-time professional musician. SCS performs 150+ shows per year, solo and also with his great band, throughout the Southeast and overseas. He has performed all over Europe, Asia, and Latin America (Mexico, Colombia). Shrimp City Slim has released 10 CDs. Latest was 'Qenz' (2014) a handful of (year 1983) musical theatre song demos finally released 2014 for download only. SCS also has worked extensively with various real-deal downhome blues artists and has released albums by some of them on his label, Erwin Music. 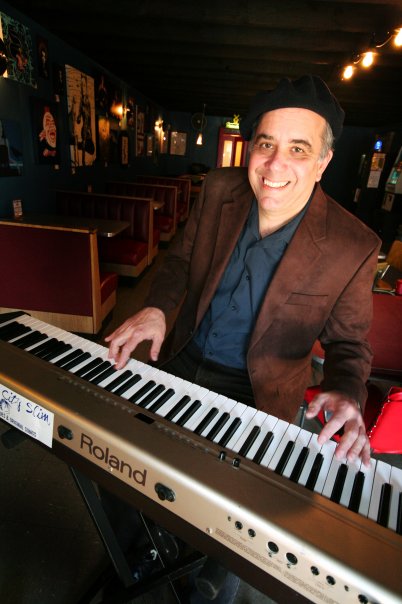 Having promoted blues in coastal SC since 1986, his other ongoing projects include organizing annual blues festivals in South Carolina (Carolina Downhome Blues Fest, Greenwood Blues Cruise, Blues By the Sea, American Music Celebration, and the Lowcountry Blues Bash, among others), playing blues on the radio (1984-2005, including 17 years on public radio), and most recently TV (55 appearances in one year on "Lowcountry Live", ABC).

I am originally from Chicago but have lived in Charleston, South Carolina since 1983. I am celebrating my twenty-seventh (27th) year full-time in music. Tracing it back...the blues spoke to me, beginning as a youth, because of its storytelling, reality, and honesty. I loved the humor and the drama of the blues and the people who sing and play it. I love the improvisational potential of the blues; how a creative singer can create a set of lyrics, a story indeed, in the moment to suit the occasion and audience. It's freedom; it's spontaneity that gives the blues its power and appeal. 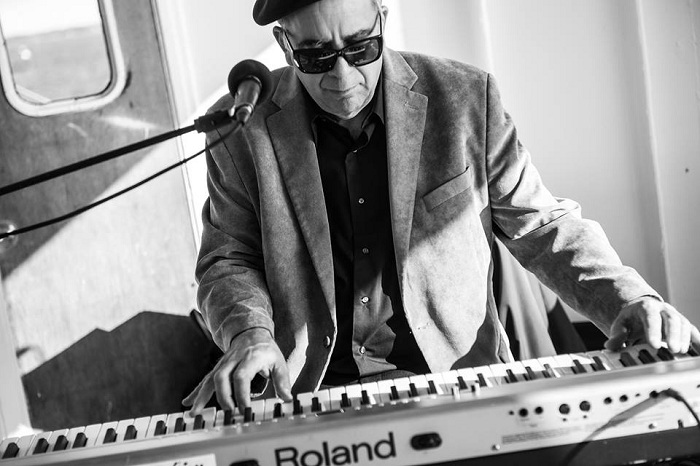 "I want to hear a SINGER tell a STORY and then allow for some instrumental punctuation to provide a sympathetic musical setting."

How do you describe Shrimp City Slim sound and songbook? What characterize your music philosophy?

Like any other performing artist, my music is a combination of everything I've listened to and enjoyed in my life. I have a blues base, but also love Latin American music, jazz, old-school soul, folk, and classical music. My songwriting is free-ranging and draws from all the music of my life experience. Even though I grew up in Chicago, I spent my early adulthood in Mexico and South America before moving to the Deep South. So my music is a reflection of all of that. More likely than not, when I sit down to write a batch of songs, they will be all over the map and in a variety of styles. That's why the Shrimp City Slim CDs (all original music) are so eclectic. I've got ten albums out so far and each one is a wild ride through many musical flavors.

Right now! It's great to be alive. I really loved my early years wandering around Latin America and all my overseas touring which began in 1990 with Walter "Lightnin' Bug" Rhodes. I've done almost three dozen overseas tours and will probably be back in Europe in early 2015. "The best moment of my career" was probably the move to South Carolina in 1983 because that's what put me full-time in music. I can't think of a "worst moment"...it is real blessing and privilege to play music for a living.

Again, I think it is the honesty that speaks to people. You have to remember that the blues was created as a personal musical expression by a basically non-literate culture. It is the sound of the human heart, the song of the spirit. I think that today we need the blues more than ever. So many great moments...I treasure the memory of twelve years of blues jams that I managed in Charleston at a now-defunct club called Cumberlands; being called on stage to play keys with artists like Sam Myers and Anson Funderburgh, Maurice John Vaughn, Sherman Robertson, Deanna Bogart and others; of course the countless gigs with Southeastern legends like Big Boy Henry, Chicago Bob Nelson, Neal "Big Daddy" Pattman, Drink Small, Beverly Guitar Watkins, etc. My band's 1989 tour in Colombia, South American was incredible as were my gigs in Malaysia, Philippines, Macau, and Taiwan. I also treasure six years of running the piano stage at Blues to Bop in Lugano, Switzerland. So many great shows, so many great nights!  I am also grateful for being able to produce blues radio shows for 21 years. What a great way to expose blues music to a larger audience!

I started producing blues concerts in Charleston in 1985 and cherish the memory of meeting and hanging out with artists such as Dr. Ross, Henry & Vernell Townsend, Johnny Shines, RL Burnside, Honeyboy Edwards, Mose Vinson, Eddie Guitar Burns, Robert Lockwood Jr., and others. These were ambassadors of the deep blues tradition and, encountering them, I came to realize that I also had a role in continuing this tradition. It was the older blues guys that insisted I assume a stage name, hence the name "Shrimp City Slim" which I've been using since 1992, starting with a tour of Holland with Chicago Bob Nelson. As for "advice", I would say I've learned a lot from the example set by many legendary blues artists but I do remember one valuable piece of "advice" and that was from Drink Small, who pointed out the importance of talking to the audience, making contact with them, and letting them get to know you as a fellow man. 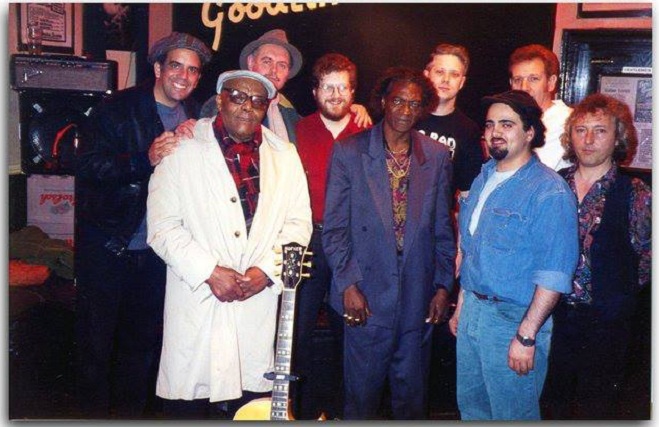 Are there any memories from BB King, Jimmy Rogers, and Junior Wells which you’d like to share with us?

Opening for BB King & Bobby Blue Bland in 1993 was a special night - a huge crowd and a chance to hang with royalty. I spent some time alone with BB in his dressing room, giving him some of the music on my record label Erwin Music and chatting; he is a very generous man. It was a blast sharing the stage with Jr. Wells in 1991 - what a character! and of course Jimmy Rogers, who I hosted in 1997 (just a few weeks before his death), was an inspiration to us all and a very nice man.

What are the differences between: Lowcountry blues, Charleston, SC and the other local scenes?

The "Lowcountry" is the verdant coastal plain that runs down along South Carolina and Georgia, an area rich in history, natural beauty, and original African-American culture. It is the birthplace of the spiritual (later to be gospel music), American voodoo, and Creole cooking. A strange and tropical place, it is truly a melting pot; a land that was contested by the Spanish, French, and ultimately won by the British. This is a haunted place permeated with many cultural influences, many of which show up in "Lowcountry blues"...a gumbo of musical sounds, somewhat similar to the mad and beautiful mix of musics found in New Orleans. As a lifelong blues fan (I'm sixty years old, born in Chicago in 1953), of course I miss the old deep blues guys. Luckily, I saw and heard many of them early on in my life and then, after moving to South Carolina, had the chance to present many of the surviving real-deal artists in concert. I suppose "blues rock" has a place in the mix, but I find it to be mostly pretentious and annoying; too loud and too bombastic for my taste. I want to hear a SINGER tell a STORY and then allow for some instrumental punctuation to provide a sympathetic musical setting. There are some good new artists out there and I look forward to more coming onto the scene.

Koko Taylor, as fierce as she was on stage, was such a sweet, demure lady and a real treat to be around. I produced a handful of concerts with her as headliner and she always tore the house down. Opening for Johnny Winter in Savannah several years ago was a gas. To my reckoning, he is one of the original 'blues rock' artists and still playing great. When he pulled out the Firebird to switch over to slide, the place went nuts. Little Milton Campbell was a king. I did one show with him in 1993, a long night with about three opening acts. Milton and his orchestra did not go on stage till about 1 am, but, when they did, took us to Blues Heaven. I still don't think people give him his due; he truly was a gifted and versatile artist in so many ways. We opened for James Cotton awhile ago in Savannah and I also brought him to my Blues By the Sea festival on Kiawah Island, SC. He really enjoys himself on stage and is a very congenial man off stage...and what incredible history! So great to be in the presence of a legend.

What are the lines that connect the legacy of Blues from United States to Europe, Asia and Latin America?

Ever since the advent of recording and of course the first overseas forays (Europe) of Leadbelly, Big Bill Broonzy, Brownie & Sonny, etc., the blues has become a world music. There are good singers/players of blues anywhere you go in the world. It becomes a cultural exchange and it's a way that musicians can help each other.  I've toured all over Europe, Asia, and down into Latin America and have become friends with so many fine blues cats. I've brought to the USA for tours artists from France (Dr. Pickup, Benjamin Tehoval), Germany (Professor Bottleneck & Harmonica Frank), England (Dave Peabody, Peter Price), Holland (Bradley's Circus), Italy (Rudy Rotta, Bat Battiston), Argentina (Marcelo Ponce & Viviana Dallas), Australia (Harper, Jimi Hocking, Geoff Achison), and more. It's a family of blues people worldwide. We help each other.

That's a hard one - there are so many historic incidents I wish I witnessed. But to pick just one, I would say I wish I could have been with Hernan Cortes and his conquistadores in 1521 as they rode through the mountain pass between Popocatepetl and Ixtaccihuatl volcanoes to view, for the first time, Tenochtitlan, city of the Aztecs. The chronicler Bernal Diaz said that Tenochtitlan shone like silver in the sunlight, the smoke of distant fires a haze over the valley. Shortly thereafter, Cortes and his legions descended to end forever the last great civilization of pre-Hispanic Mexico. Talk about the blues! 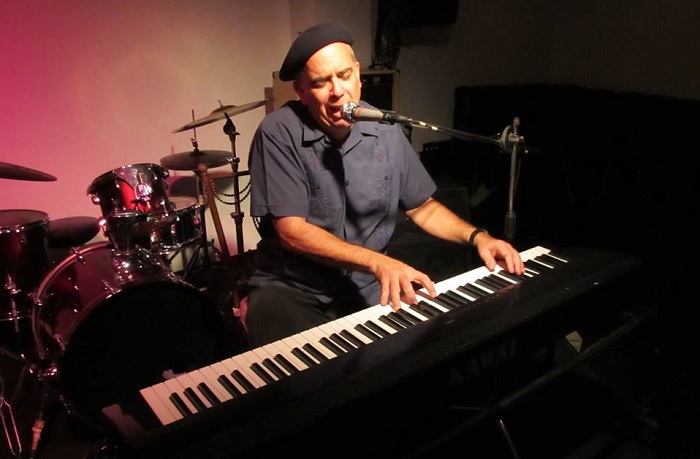