"I miss the innocence and all the great music of the 60's and 70's….they don't make music like that anymore…"

Philadelphia based Heavy Metal trio Bang have often been mistaken for a Florida band. The initial trio of vocalist/guitarist Frankie Glicken, bassist/vocalist Frank Ferrara and drummer/lyricist Tony Diorio first created the band whilst still teenagers. The band was originally titled the Magic Band and led by singer C.J. However, C.J. would depart (apparently for a mental hospital!) as the band became Bang. Journeying to Florida one of the band's first gigs was performing as support to Deep Purple.

Bang did not start their career too well as despite signing to major label Capitol Records a recorded Ron and Albert Howie produced debut album, laid down in 1971 provisionally titled Death Of A Country never saw a release. It was to be 1972 before Bang set the scene. Bang replaced keyboard player Jeffrey Cheen with Pete Sears for the 1973 album Music. This album also saw the departure of drummer Duris Maxwell, who went on to guest on Heart's 'Dreamboat Annie' debut album in 1975. Bruce Gary would take Maxwell's position on the drum stool. 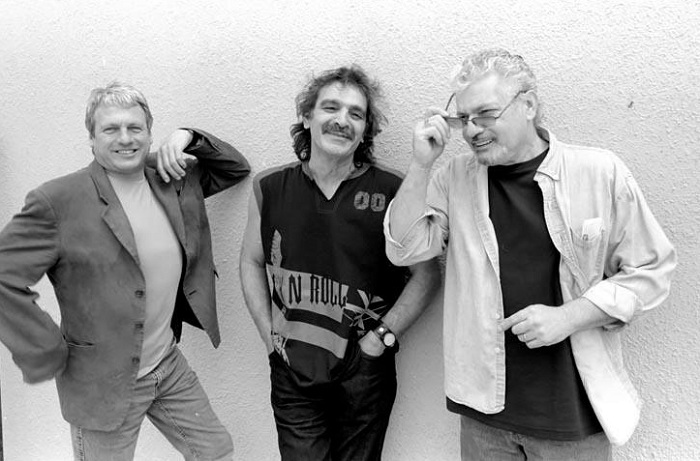 The group toured heavily with Rod Stewart, Deep Purple, Alice Cooper, Three Dog Night, Guess Who, Steppenwolf, Grand Funk Railroad, Kinks, James Gang, Ike & Tina Turner, and Black Sabbath in their time and had Fleetwood Mac open on other occasions. In fact, Bruce Springsteen is also known to have played an acoustic set opening for Bang at a gig in Richmond, Virginia. Needless to say, Bang were also one of the first bands to use pyrotechnics as part of the show.

Amazingly the band was still operational in 1999, releasing a set of demos dubbed 'RTZ' with live work the following year saw Bang drawing new appreciation from the Stoner Rock crowd. In 2004 the band released the album The Maze, an ambitious affair utilizing full choir, orchestrations or epic keyboard arrangements, united Ferrara, Gilcken and Diorio. On January 2014 Bang announced their reunion. Frank Ferrara and Tony Diorio talks about the band and their experience on the Rock roads.

How do you describe band’s sound and progress, what characterize Bang philosophy?

Frank F: I would say that our sound is our own...Big and powerful… Guitar driven melodic and dynamic….we seem to be able to write different kinds of music… which to me…is refreshing…

Which is the most interesting period of Bang and which was the best and worst moment of bang over the years?

Frank F: The most "fun" moment was rehearsing and making our music a reality…the worst moment was Tony leaving the band…but it’s all good now cause we're back and sounding better than ever…THIS will be the "best" moment…

What are the differences and similarities the 70s Bang and todays? What are the lines that connect the 70s and nowadays?

Frank F: It’s still the same…We still have Tony's lyrics…Frankie's guitar and my vocals…and with our new drummer Matt Calverese…the band sounds better than ever… Tony: I was and still am into God, sci fi, time travel and writing songs from just a title handed to me by the Franks like RTZ or Eve of The End. I also love to write about love lost, love found, looking for love and I love you songs. I wanted a song with a number title so I wrote 413. 90% of my lyrics rhyme and have a meter and flow. Frank does an incredible job coming up with melodies. He molds my words.

Frank F: Probably because BLUES is in part of every style of music...

Tony: I Have no idea, I'm not a blues listener but I write blues lyrics "Exactly who I Am "Feel the Hurt" and others.

Frank F: We jammed at a show with BOB Seger,,,we were short on time and decided to jam to fill the void…we jammed with the Silver Bullet Band and did Ramblin' Gamblin' Man…it was great…

Tony: When the crowd rushed the stage as our fireworks display went off. The night we smoked Black Sabbath.

Frank F: Wow…there's so many…from Andy Williams telling us that "there's room for everybody"…to Grand Funk…Give them more than just the music to Dr. John…when he was taking a nap 5 minutes before show time…telling us to relax…quit being so nervous…save it for the show…to the Doobie Bros…who bailed us out when the promoter didn't pay us for our set…the Doobies were kind enough to give us some cash so we could get to the next show…

Tony: When I found out we're the head and not the tail, and our gifts will make a place for us. 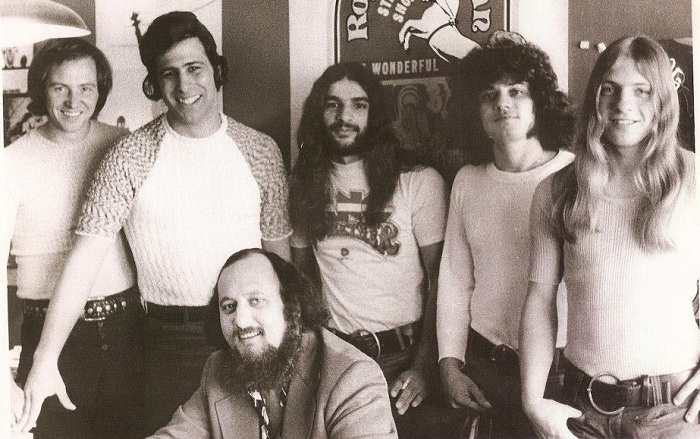 "I don't think music will ever be as good as it once was….just like our planet falling to pieces….I feel music has fallen to pieces also…I hope I'm dead wrong…I hope some band comes along and makes a liar out of me." (Photo: Bang with Vice President of Capitol Records)

Frank F: Several shows stand out…but one of coolest was opening a show for Black Sabbath…a band we loved…and stealing the show from them…that’s when we realized we really belonged with the "big boys"…

Tony: As told in the BANG story playing at the Sportatorum in Miami seeing my 3 little kids off to the side of the stage watching me, wondering "what is daddy doing"?

Frank F: I miss the innocence and all the great music of the 60's and 70's…they don't make music like that anymore...future of music?…boy that’s a tuff one…you’re asking me…so I'll tell you what I feel…I don't think music will ever be as good as it once was...just like our planet falling to pieces...I feel music has fallen to pieces also…I hope I'm dead wrong…I hope some band comes along and makes a liar out of me.

Tony: The Three of us against the world and when music was my total life. No TV no news just playing, writing and recording. I'm still doing the last two. I'm hooked on music with a big guitar.

Frank F: CHUCK BERRY- he would show up at the show in a rental car with his stage clothes and guitar…In his rider the promoter has to furnish a band… as soon as the show was over he would…GET his money …jump in the car and go to the airport to go to the next show….lol…no overheard…

SABBATH- stealing the show from them in Fayetteville, NC made us realize just how good we could be… 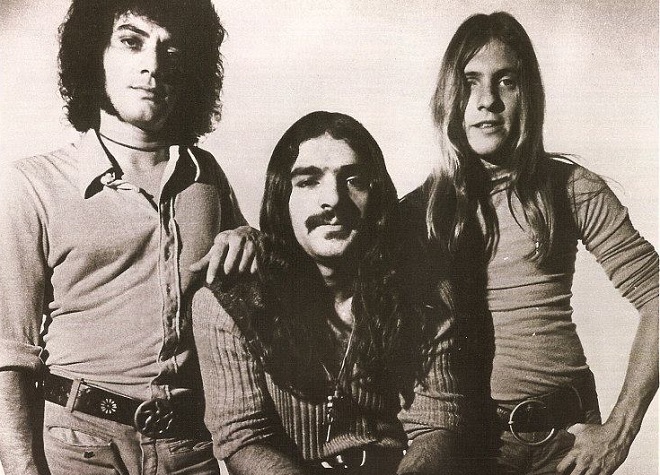 Frank F: I think more than anything is the fact that 3 guys from a small little town were able to craft a destiny for ourselves….and the fact that we were contemporaries to all the great bands of that era makes us extremely proud and humble….

Tony: When we played with the Byrds in Virginia, my roommate from military school 10 years earlier (Staunton Military Academy) came to see me and he was bald and I had major hair. We laughed.

What's been your experience from the Mar Y Sol Festival 1972 -Puerto Rico? Do you remember anything funny?

Frank F: The whole trip was BANGtastic…from taking 5 hours to get to a destination that's less than 3 hours from Miami…get a flat tire when we landed…to chill with all the great bands that were all staying at the same hotel….you can get the whole story on the BANGsite…it was a very memorable trip….

Tony: It was so hot on the stage we had to cut our set short to keep me from passing out. I had one speed on drums. Petal to the metal. I actually burnt my fingers grabbing a cymbal. Also when the locals who had locked there truck with our equipment demanding more money to take it to the airport and our roadies hotwired their truck. I swear to God as we were taxing down the runway to take off looking out the window they were chasing us in a pickup truck swinging machetes.

Also on our way there our plane dropped 2000 ft. in the Bermuda Triangle and we thought it was over as we pealed ourselves from the ceiling. I wrote Humble on the plane. And lastly our plane had a flat tire when we landed and sat at the end of the runway and was a topic of jokes with the other bands.

Frank F: Doing a worldwide webcast to all our fans around the world so we could all be ONE at the same time….that would be cool...

Tony: Write and record a song. There is nothing that compares to growing a song to completion from a word or a chord. 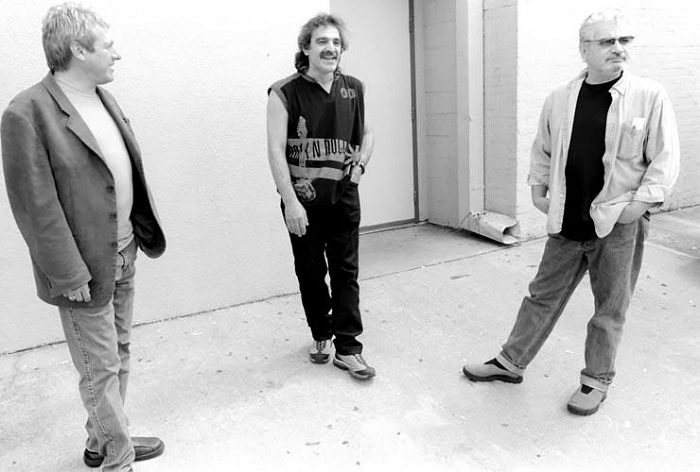