"I can say music links up a lot of people, and it’s important as a lifestyle, and it has impacts on socio-cultural implications for sure. No matter where you from, music has no language or nationality."

Italian blues musician Marco Da Rold born back in 75, always interested in music and lyrics, he started to play bass guitar and guitar very soon, approaching artists like Jimmy Dawkins, Otis Rush and Muddy Waters, as long as other british bands, like Chicken Shack, John Mayall and others. As a one-man band he recorded 2 self-released CDs, between 2010 and 2013. In June 2016 Marco Da Rold's Ghost Train project was born, a 3 piece-band composed by Marco on vocals and guitar, Paolo Colombo on bass and Matteo Saronni on drums. A brand new EP of 4 tracks is out on bandcamp.com and these songs will be played live along with some other songs. Italian guitarist Marco Da Rold talks about local scene, British blues boom and Stan Webb

Well I grew up with rock and blues, I started listening to music when I was a kid. I can tell this music influenced my playing and composing style.

How do you describe Marco Da Rold sound and songbook? What characterize your music philosophy?

My music is an expression of myself, as I said before rock and blues played a main role in my songwriting. My sound is a kind of stripped back, I tend to use few instruments so that the sound is powerful and direct.

Attended and playing many gigs in my career, I remember once at a festival in north Italy, we played at 5 o clock in the morning with rising sun, a kind of psychedelic experience.

What I miss more from the past is authenticity, today anybody can be a virtual musician with computers, tech etc, my biggest fear for the future is tribute bands, because they tend to erase personality in music, and this is bad, while I hope that many young musicians re-discover the originality and the soul of the music. 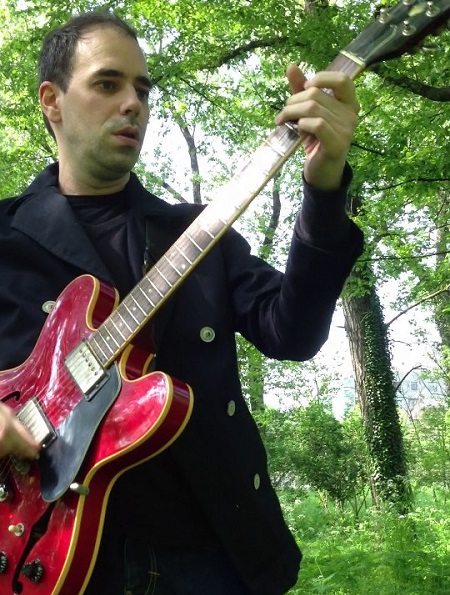 Well to be honest a blues scene never existed in Italy, a bunch of artists use to play blues, rock etc but the culture is not so good. Probably there’s more in the Italian underground bands (like me) than on mainstream.

What are the lines that connect the legacy of Blues n’ Rock from United States and UK to Italy?

I always listened to British and American rock blues and stuff, I don’t see any important connection with Italian music.

Having met Stan Webb touched me emotionally, he’s one of my all time favorite artist, this happened in London though.

What is the impact of the Blues n’ Rock music and culture to the racial, political and socio-cultural implications?

I can say music links up a lot of people, and it’s important as a lifestyle, and it has impacts on socio-cultural implications for sure. No matter where you from, music has no language or nationality.

Tough question... I’d probably choose going back in the early 70’s in UK, so many evolved bands in that period and many of my favorite albums were released in those years as well.