"The music that the blues and the country are aboriginality. Therefore we have the scene which I cannot understand, but think that a blues-rock is world music. I believe it with world common language."

Kunio Kishida is Japanese guitarist and vintage guitar dealer, has brought together a collection of the finest vintage instruments, musicians, technicians, and facilities to produce his debut album, Swamp Waters (2002), which he has made for vintage guitar lovers around the world. Produced by Kunio Kishida and Johnny Sandlin, famed Allman Brothers engineer/producer, at the Muscle Shoals Sound Studios in Sheffield, Alabama, using an amazing collection of classic/vintage recording equipment, this album echoes the styles and sounds of Kunio's heroes of the sixties and seventies. 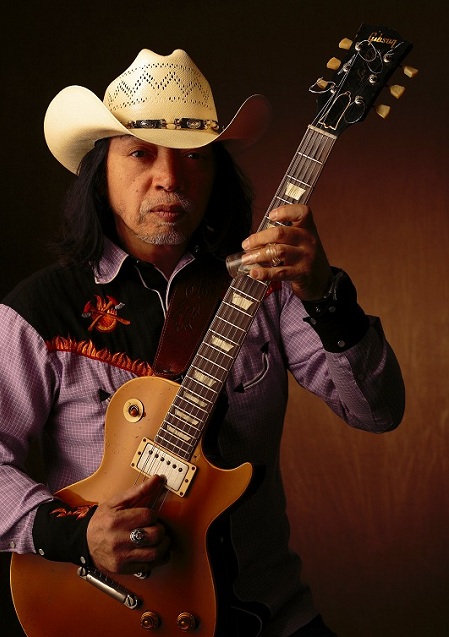 Besides performing with a '57 and '63 Fender Stratocaster, he plays a '56 Gibson Les Paul Goldtop and a 1959 Les Paul Sunburst once owned by Dickey Betts. Berry Oakley's '57 Precision Bass is played by Jerry Wasley, former bassist with Brenda Lee. Kunio Kishida CD discography if you have not heard Kunio's music, Kunio Kishida: Live in Japan Vol. 1 & 2 are a great introduction to one of the great electric blues-men. You will hear Kunio and his band in a great performance from 2011 at a small listening club just outside of Tokyo. Still In Time (2011) is an intimate, solo singer songwriter playing original folk blues album with Dobro guitar. Other Kunio’s albums are Alabama Boy (2005), Statesboro Blues CD (2007) and Slideaway (2008), a collection of original instrumental performances by one of the great slide guitarists. Produced by Sam Taylor, recorded in the heart of Texas, and featuring Sam on keyboards with Jamie Oldaker on Drums and Jerry Wasley Jr. on electric bass.

How do you describe Kunio Kishida sound and progress, what characterize your music philosophy?

I was influenced by British rock such as the Beatles, the Cream where I appeared in the 1960s first. The 1970s began and was affected by the Allman Brothers Band I was in particular deceived by a slide of DUANE ALLMAN.

It was always pleasant to sell a vintage guitar to playing the guitar. Was able to spend the best life; think. The worst is that the times not to be able to play the guitar in a traffic accident in 1983 lasted for years. 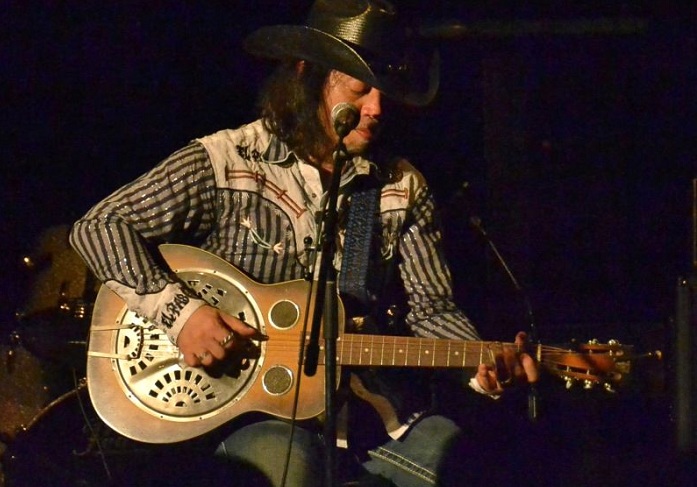 "I want to go in Macon, GA of about 1970. I have never listened to live performance of DUANE and Berry. I want to listen directly. If it is possible, I make a session and want to be knocked down. Ha, ha."

Why did you think that the Southern Rock and Blues music continues to generate such a devoted following?

As for the Southern Rock, various elements think the blues to be included to a base. Therefore I think that it is attractive music forever.

Do you remember anything funny from studio with Johnny Sandlin, Scott Boyer, and Jimmy Johnson?

Only as for the person that everybody who cut a record in Muscle Shoals Sound Studio is really serious. Johnny is a boss of all. In the owners of the big heart, he watched all in silence.

Scott Boyer is a really splendid singer. It is a person of gentle character.

A professional of the average professional as for Jimmy. Only a joke said in cheerful people, but he put us when everybody was tired. He said “Let’s do it again!” Wow, I was fired up, too.

At first it is two times of recording sessions in Muscle Shoals. It was the really best. Having made a session with a Southern Rock artist in a 60 years old birthday party of Johnny. It is Tokyo in 2006 I played with Chuck Leavell at secret party and is to have made a guest appearance for a performance of Donnie Fritz & Decoys in Japan in September 2009 too. 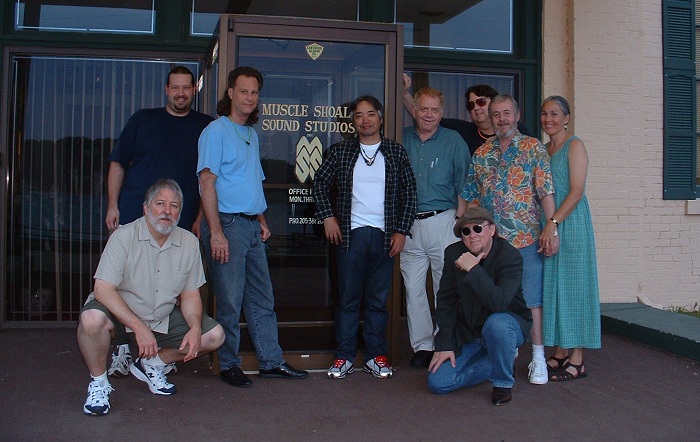 "Various music is popular, but the Rock which was based on the blues, the blues in Japan is deep-rooted. But it is a problem that interest goes in other music to a young generation." Photo: Kunio at Muscle Shoals Sound Studios

It is to have met Dickey Betts in 1991. I was back to a professional musician by advice of Dickey. And I began the composition activity.

Are there any memories from Chuck Leavell, Dickey Betts, and Bobby Whitlock which you’d like to share with us?

Chuck Leavell: At first I was surprised because I did not think that Chuck participated in recording of 2004. What encountered in a backstage of Stones in Osaka in 2003 was lucky. When Stones came over to Japan in 2006, I do a secret live party, and it is not forgotten what I played at a home party. I felt honored that I was able to play "Jessica" in particular together.

Dickey Betts: I became close, and Dickey Betts came to the shop to play in 1991. I do not forget to have made a session. When I met again in June, 2013, I was really moved. What I played in my solo album in Les Paul whom Dickeys recorded "Jessica" and "Ramblin man" on in 2002 thought that fate was very deep.

Bobby Whitlock: I met him with Bonnie Bramlett for Muscle Shoals recording of 2002. I knew him in all and the voice that talked first though I did not know him who he was. Though he was said that he wanted to participate in recording, the keyboard was impossible because there were Paul and Sam. At the time of recording of 2004, I had him finally flip a few songs of B-3. As for the Hammond solo of the blues, Dominos was right a feeling. "As for the Southern Rock, various elements think the blues to be included to a base. Therefore I think that it is attractive music forever." (Photo: Kunio and Dickey Betts)

Make an account of the case of the blues in Japan. Which is the most interesting period in local blues rock scene?

Various music is popular, but the Rock which was based on the blues, the blues in Japan is deep-rooted. But it is a problem that interest goes in other music to a young generation.

I think that a young blues guitar hero is necessary.

From the musical point of view what are the differences between Japanese and American scene?

I feel difference in size of the market. Because the market is small in Japan, it is easy to become single music. But the United States always has a feeling that the music of various genres exists. I feel different in the music that is popular by the state.

What do you miss most nowadays from the Capricorn era? What are your hopes and fears for the future?

It is natural, but if Duane Allman and Berry Oakley still alive. A Rock of the southern part where oneself came under an influence of most in the life and a blues-rock are what is inherited by a person of the next era.

When did your love for collecting guitars come about? What are your favorites guitars and why? 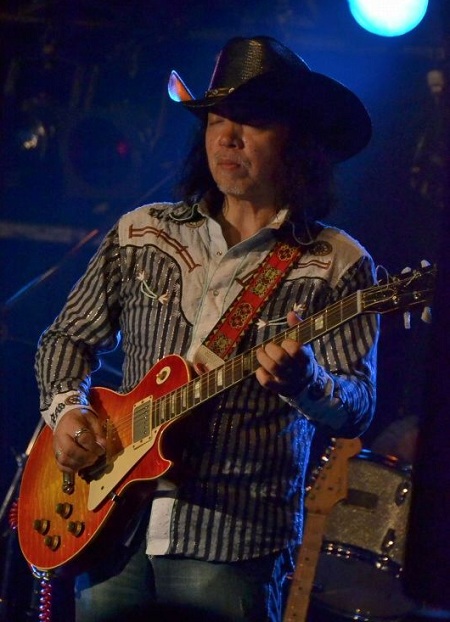 It is the early 1970s. Attracted by Clapton, a sound of Bloomfield, it is time when I have begun to Rook for 1959 Les Paul and 50's made Strat when it was not available at all in those days in Japan.

It is Les Paul made in 1959 when I acquired Nancy and a nickname. It is a longtime fellow. Besides, it is the fellow who is important to Strat equally in '57. The reason is because the sound that oneself wants to make comes out.

I like Alabama Boy which I custom-ordered in RS Guitar Works recently.

What is the line that connects the Blues with Southern Rock? Do you believe in the existence of real blues rock nowadays?

The music that both the blues and the Southern Rock originated from the Southern U.S. Therefore I think that I am connected very naturally. I accept the existence of the true blues-rock. The music that the blues and the country are aboriginality. Therefore we have the scene which I cannot understand, but think that a blues-rock is world music. I believe it with world common language.

I want to go in Macon, GA of about 1970. I have never listened to live performance of DUANE and Berry. I want to listen directly. If it is possible, I make a session and want to be knocked down. Ha, ha.