Bluesman Jerry "Boogie" McCain was a prolific songwriter and one the world's most influential amplified harmonica players.

Although McCain has continued to adapt with the times, his musical standards and lyrical wit have remained consistent throughout his career. McCain had a long music career that spanned the decades from 1953, when he made his first recordings, to his death. His best-known songs include “Ain't No Use for Drug Abuse” and “Burn the Crackhouse Down,” which he wrote about goings-on in his neighborhood. 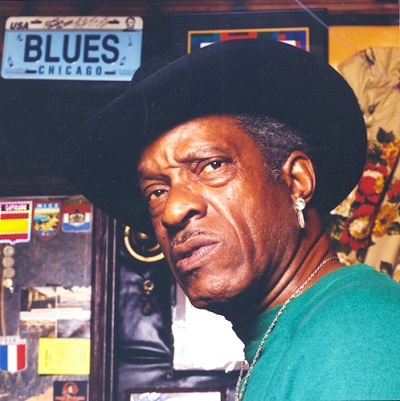 Bluesman Jerry "Boogie" McCain was a prolific songwriter and one the world's most influential amplified harmonica players. His songs are admired for their humorous social commentary and natural vocal delivery as well as for their innovative harmonica leads. Critics regard his 1960 instrumental Steady as a blues harmonica classic.

Jerry "Boogie" McCain was born June 19, 1930, in Gadsden, Etowah County. At birth McCain was named Paul Edward, but his parents Marcellas and Cynthia Nickols McCain called him Jerry from Jerry "Boogie" McCaininfancy. He was the youngest of five siblings. Both former sharecroppers from Talladega County, Cynthia played guitar with her sister at the Holiness church and Marcellas kept a Rockola jukebox at his barbecue stand. Jerry began playing harmonica at the age of five, developing his skills by playing with other musicians on the streets of Gadsden. As a teenager, he performed on the local radio station WETO, accompanied by friends playing a jug and washboard to keep the beat. He earned the nickname "Boogie" for his facility with up-tempo rhythmic melodies. McCain dropped out of Carver High School in the ninth grade. He later worked as a bounty hunter, delivered furniture, and worked at a foundry in Gadsden.