After launching indie label hits in 1967 Atlantic Records recruited Dick Wooley to head their Southeast and Midwest record promotions. At Atlantic, Dick helped launch many legendary Rhythm & Blues and Rock artists who are now in the Rock and Roll Hall of Fame. In 1972, after working at Atlantic Records provided Dick an opportunity to become Capricorn Productions Vice President when they switched to Warner Brothers and debuted the label as Capricorn Records. He promoted several unknown artists at Capricorn into a tidal wave of hit records that established "Southern Rock".
In 1976, Dick left Capricorn at the top of the charts and partnered with Atlantic Records to start Dick Wooley Associates, together they launched indie label Rabbit Records. Rabbit launched several new artists on to the national charts and indy promoter Dick Wooley Associates developed other label’s new artists into gold and platinum sales. In 1981, Disco was king and Dick decided to move to the beach and retire from the music business. Changing tax laws opened the door for Dick to successfully market ocean-front properties to investors and in 1983 he partnered with Benchmark/Atlantic to develop seven university student communities. In 2004, Dick was inspired to return to his music roots and opened Internet based King Mojo Records to showcase emerging Blues and Rock artists. 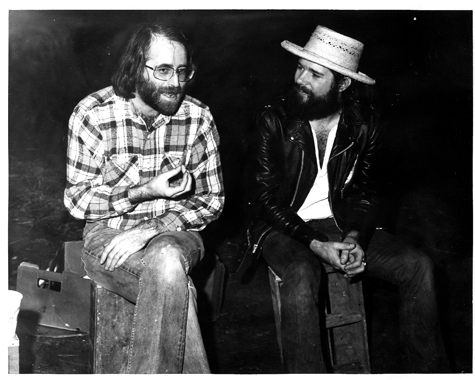 Is there any similarity between the music today and the music of ‘60s – 70s?

I can find no similarity at all, today’s so-called music is Dull and Boring, they use the same tired beats that haven’t changed since the 80’s, due mostly to the multi national corporations that now run the music business from the bottom line.

Back in the day, everything was about the music, everyone in the business was interested in music, asking what was new? Have you heard the new XYZ album? etc. Today music executives are only interested in profits, they don’t care about music, they’re accountants and may as well be in the shoe business. What are some of the most memorable tales with Ahmet Ertegun, Jerry Wexler and Tom Dowd?

Too many to list here, I have some on my website, if you would care to take time to go there and read about them. Having said that, I must tell you what a great privilege it was to have worked for the greatest music people in modern music history. No one will ever be their equal.

I have to confess, back in the day, I was so busy working to get my artist’s albums on the charts I never really appreciated how interesting and important the times were. But today, I take the time to appreciate each day, so I would have to say that now is the most interesting time in my life. 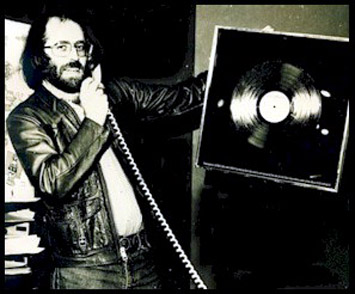 What experiences in your life make you a GOOD Promotion Man?

What makes me a good promotion man is; First I love music, especially new music and new artists. Second, on the business side, many years of experience has taught me what “NOT TO DO” and that is the most important knowledge you can have in the business. However, the only way you can get that knowledge is by making mistakes, so I think, if you’re not making mistakes your not doing enough.

What's been the experience you took from Atlantic Records?

Being trusted by my bosses to promote their music, they never looked over my shoulder or second guessed me. This taught me to be like them, hire the best people you can, then trust them.

Are there any memories from "Derek and the Dominos” at the Criteria Studios, which you’d like to share with us?

Hanging out with the band on a social level and getting to know them as people is my best memory of that session. But again, at the time I was working so hard getting their music on the charts that it was only after many years that I became aware of how important to our music history that the Criteria studio session was. 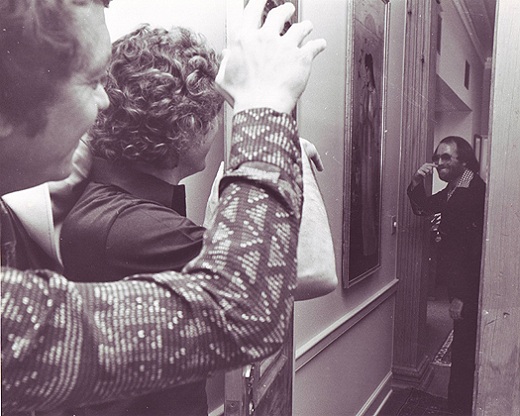 The Allman Brothers Band were Southern Rock’s first super-stars, then Marshal Tucker Band and Wet Willie  and all three bands were on our Capricorn label. Later, other bands got labeled as Southern Rockers, but we were the first with the music and with the biggest box-office and album sales.

What characterize the sound of southern rock?

Tell me a few things about your relationship with Phil Walden, how do you characterize him?

I met Phil when I worked at Atlantic Records and we had Otis Redding on the label, Phil was his manager. For many, many years Phil was a great personal friend of mine, but Phil, was a very troubled man, in addition to having his genius for music, he had a well-publicized drug and alcohol addiction that made him have a violent temper and ultimately that made him a target for a self-inflicted disaster. In the year I left Capricorn it was sad for me to see him wreck himself and the company. 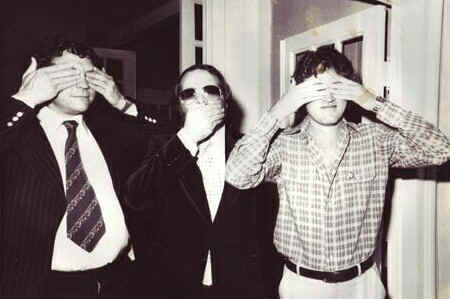 Strangely enough it was Phil Walden, he taught me what not to do.

How did you first meet Duane, what kind of a guy was the “Skydog”?

I first met Duane in the sixties when he was a poor musician hanging around the hippie area of 14th street in Atlanta, he was seeing a girl named Dixie who worked at a head shop and he looked like he needed a bath, as did everyone back then. Later I’d see him at events around town and when he played in the park for the street people, but I got to know him in Miami at the Derek and the Dominos session with Eric Clapton. Duane was a wise-cracking kind of guy, always had a wry come-back. I remember when Joe Galkin, Otis Redding’s publisher asked Duane, “Duane I hear you have a drug problem. Duane replied “No Joe, I don’t have a problem anymore, I can afford them now.

Some music styles can be fads but the Allman Brothers music is always with us.  Why do think that is?

One, their music is so great. Two, on New Years 1974 I put together a worldwide radio show that gave them a worldwide fans base. 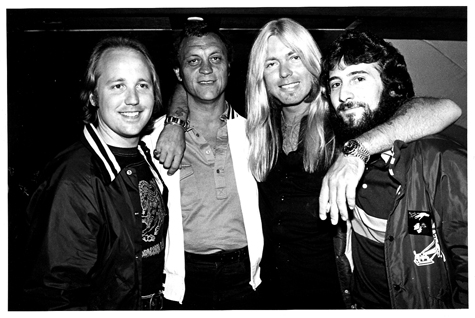 The best, was the year after I resigned from Capricorn Records and broke the Molly Hatchet band with their first album, a million seller and Capricorn had not launched a major artist since I left. The worst, was in 1973 when after a very busy day I introduced Gregg Allman to the press in Memphis as Duane, I was so embarrassed I wanted to crawl under the table and hide.

Get an education first, and keep playing while you are in school. That way when you graduate you’ll have two well-developed skills. 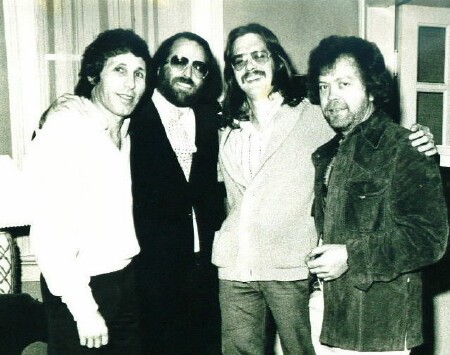 Would you mind telling me your most vivid memory from the Marshall Tucker Band & Elvin Bishop?

The most memorable moment for MTB was using them, a totally unknown band, on my worldwide New Years radio show in 1974 and two weeks later they’d sold 250K albums. The Elvin Bishop record, I edited it and promoted to the number one spot in Billboard’s charts, then the week it went to number one I resigned from Capricorn.

Are there any memories “ON THE ROAD” from Jimmy Carter’s presidential campaign you’d like to share with us?

We had a party for Jimmy Carter in Atlanta during his presidential campaign where he met Hunter S. Thompson, the pairing of the two in conversation was very interesting to watch.

How you would spend a day with all those “southern cats today” (Allmans, Charlie, Dru, MTB, Winters)? 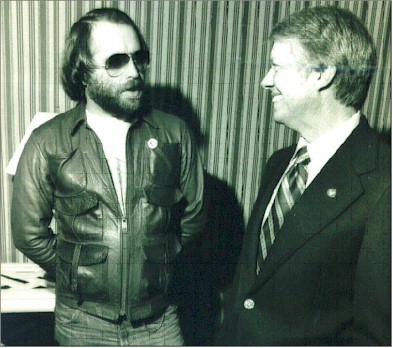 Which of the people you have worked with do you consider the best friend? Of all the people you’ve meeting with, who do you admire the most?

My best friends are people I have known for 30 to 40 years, these are people that know the worst part about you but in spite of that they still like you. Person I admire most of all is President and Nobel Peace Prize recipient Jimmy Carter, I am very proud to have been a part of helping him get elected President.

From the musical point of view is there any difference and similarities Rabbit, Mojo King, and Capricorn records?

Not really, at Capricorn our goal was to become a big company. With King Mojo Records I want to keep it small and manageable.

You had pretty interesting label, Mojo King. Where did you get that idea?

I started designing websites in 1993 and when I decided to start a record company, I wanted it to be a virtual company exclusively using the internet for distribution that I can run from my home or at the beach. The name came about after doing a web search, entering name after name while thinking about combining a traditional name and a music phrase. To my surprise the name King Mojo wasn’t taken, so I bought it immediately. 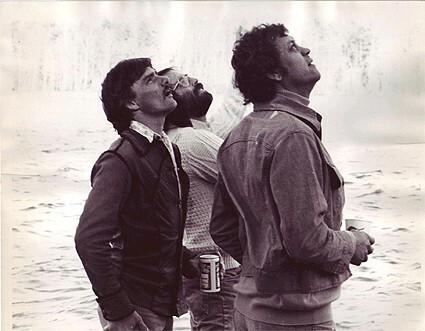 Tell me a few things about the “Southern Rock” explosion, how that came about?

I was always so busy working to get artists on radio and into the charts while working for Atlantic I never noticed and shift in our music from R&B to English Blues-Rock. But at Capricorn, it was like an earthquake, every day it was some new story or event. It was always a challenge to come to work and it was always exciting.

Do you think the younger generations are interested in the southern rock?

“Dream? I would have all of King Mojo Records artists on the chart at the same time. Feeling good about yourself

I would spend more time with my family and avoid drugs.

You have working with many artists, which are mentioned to be a legend. It must be hard, but would you try to give top 3?

Which projects have been the biggest experiences for you? Wherever I travel today, I see the haze of industrial smoke everywhere, it is so depressing, it doesn’t have to be that way. Today our world has become small, we are connected by instant communications and by our connected ecosystems. We must learn to keep our environment clean, sustainable and livable for the generations that come after us.

My wish for music is for it to become relevant again, like it was back in the 60’s and 70’s. It helped spread the word of peace, it changed peoples attitudes and it stopped wars!