"Happiness is a good dog; they always love you and they never judge."

As a founding member of the one and only Allman Brothers Band and in his own storied solo career, Allman has long been a gifted natural interpreter of the blues, his soulful and distinctive voice one of the defining sounds in the history of American music.

On January 10, 2014, a multi-generational assortment of musicians from the worlds of rock, blues and country joined together at Atlanta's historic Fox Theatre for an once-in-a-lifetime all-star performance to pay tribute to the life and music of the legendary singer/musician/songwriter Gregory LeNoir "Gregg" Allman. That live musical event can now be experienced via the new multimedia package All My Friends: Celebrating the Songs & Voice of Gregg Allman.                                                      Photo by Danny Clinch 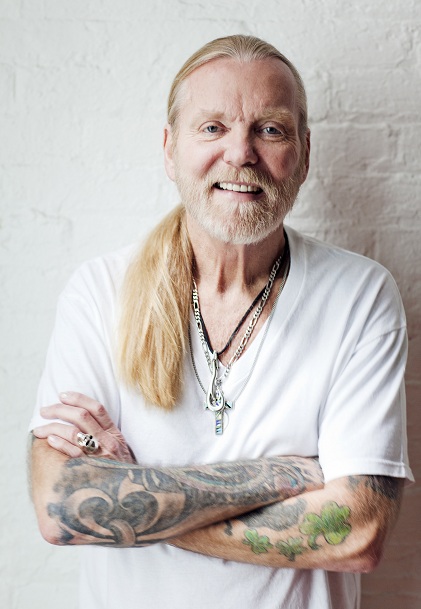 The variety of the artists paying tribute to Allman, and the diversity of their interpretations of his songs, attests to the broad appeal of Allman's talents, which transcend stylistic and generational boundaries. With musical direction by noted  Don Was, several of the guest performers are drawn from the Allman Brothers Band's extended musical family, including current ABB guitarists Warren Haynes and Derek Trucks (with his wife and frequent musical partner Susan Tedeschi) and Gregg's son Devon Allman. The prestigious slate of performers also includes such Allman contemporaries as Jackson Browne, Dr. John, John Hiatt, Taj Mahal, Jimmy Hall and Sam Moore, along with such younger acts as Robert Randolph, Keb' Mo', Widespread Panic and Pat Monahan.

Gregg, along with the Allman Brothers Band, was inducted into the Rock and Roll Hall of fame in 1995. At the 54th Annual Grammy Awards in 2012, the group was honored with a prestigious Lifetime Achievement Award. The same year, Gregg's critically acclaimed tell-all memoir, My Cross to Bear, spent several weeks as a New York Times Bestseller.

I learned how to express myself through the blues; the blues let your feelings come out like no other form of music. The blues are a big part of my music, and music is my life’s blood, man.

What experiences in life have triggered your ideas for songs most frequently? What characterize Gregg’s philosophy?

There are as many ways to write a song as there are songs, and so almost anything can trigger that. I don’t think you necessarily have to be sad to write a blues song, but maybe what someone else is going through in their life can move you to write a song. I take life as it comes, man; every day is precious to me.

What do I miss most from music of the past? I miss the fact that people actually played music back then! Today there is so manufactured crap out there that has nothing to do with musicians actually creating and playing music. I hope that trend can change, but I don’t know, man. There are some young people out there trying to do it the right way, and I wish them all the luck in the world. My brother pushed me to believe in myself; he believed in me before I did, and that is the best advice I ever got. So, if you’re reading this, believe in yourself!

The end of racism; there is no place for that in my life. That is what I love about music; music is colorblind, man. It don’t matter what color your skin is; if you can play, you can play.

What has made you laugh lately and what touched (emotionally) you? Happiness is……

I’m happy to be alive and making music, and I’m touched that I was given that chance by someone who donated their liver so that I could live. Happiness is a good dog; they always love you and they never judge.

I would love to be in North Florida, fishing with my brother. Those were good times, man.