"Argentina is a privileged country level musicians and sunsets all genres."

Laura Lagna-Fietta was born in Buenos Aires, Argentina in 1966 and comes from a generation of pioneers of Jazz in Argentina with what she had the opportunity to meet early styles of music. His grandfather was a renowned conductor worldwide, their bassist and jazz singer father and his uncle was a respected manager of artists in the country and in South America. As a child, Laura wrote poetry, having a column in the school newspaper. In the 70s he ventured into television when still in the country was in black and white, but it was the music that captive. At age 16 he began to management and promote emerging local musicians in the local bars and cultural centers, when then emerged from a dictatorial political period, which met from young people today were and are rock stars in Spanish in South America. In 1989 he immigrated to Brazil where he devoted himself exclusively to sing covers of all types and organize their own tours. 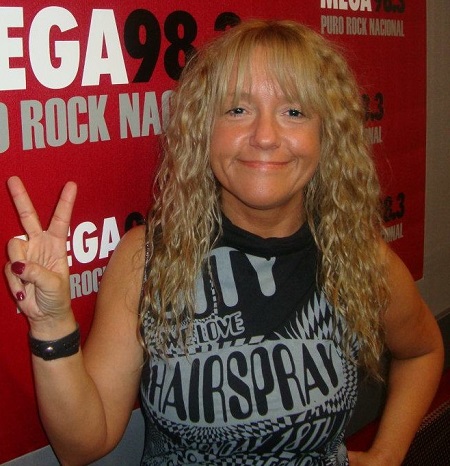 Back to the country he worked with different groups of Rock, Blues, Pop, Folk and Tango for a local house concerts. In 2003 he immigrated to Mexico for a while and was hired as wardrobe and assistance tasks Back Stage at Cirque du Soleil. When you return to Argentina in 2004, created a website called only live which was only local live shows recommendations, interviews and coverage shows that in turn were published in newspapers. For 9 years he devoted almost specifically to the production and dissemination of Blues & World Music. In his teens he turned to the Argentine Rock which was heavily influenced by Blues, Country and even including classical music: Charly Garcia, Spinetta, Nito Mestre along with James Taylor, The Beatles and especially John Lennon's and 80's lived a full time: Queen, Prince, The Cure, Lou Reed, Ian Dury, Madonna, Marvin Gaye, Al Green, Tina Turner, Joe Cooker, Eric Clapton, and Michael Jackson. From 90’s feel that nothing new happens and re-discover more mature the Soul, Swing, Jazz, Blues and especially admires singers. Today enjoy music in general, be soliendo playlist which can range from Satchmo, BB King, Rolling Stones, Tony Bennet to Maroon 5. Laura through the years worked in many different areas of music: from musician, assistant, soundwoman, wardrobe assistance, selling musical instruments and sound equipment, content writer, interviewer, producer, image consultant, media and management with local and international musicians. Since 9 years ago, she is dedicated only to produce, promote local and International Blues and World Music artists in her country although when putting playlist predominant themes in English, Laura is aware of indigenous musical styles and international in Spanish and is a promoter militant musicians of his country and believes that Argentina is a privileged country level musicians and sunsets all genres.

My roots in music are Jazz and Bossa Nova because my grandfather Hector Lagna-Fietta was one of the first Jazz Orquestras in my country, Argentina and then my father also musician had linked me to the Bossa Nova.

So, at these times I was very confused about styles. Nowadays I recognize and I’m a believer than all these styles are linked. I think that the higher period about blues scene in “now” in my country, because I had never seen such much young people interested in playing Blues, record their independent albums and participate in Jams. There are lots of Blues Jams especially in Buenos Aires.

But I believe that all is happens now in Blues local scene comes from another great period in the 90´s when B.B. King, Albert King, Eric Clapton and specially all Chicago Legends had come to play in the Blues Special Club and was there that stated a lot of musicians than today teach the legacy of these period to all these new generation. So now: we have all together! 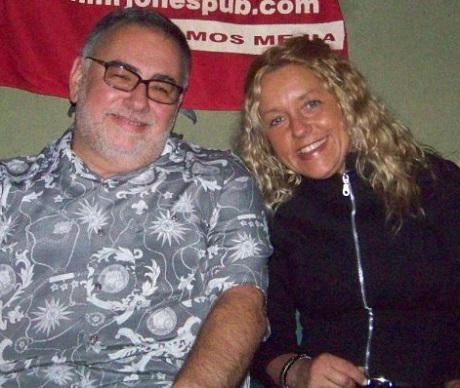 In fact my personal link with the Blues starts in my early 20´s with Eric Clapton, The Rolling Stones, Robert Cray and Stevie Ray Vaughan then I also known legend B.B. King and Buddy Guy.
Locally I could recognize Blues in some local groups in Spanish such as Memphis La Blusera and "some blues” inserted into local Rock Groups from here or guitar solos of Blues inserted in a movement of my country named "Rock Nacional ".

That’s all I knew about Blues until I started to work with Daniel Raffo, 9 years ago, and there I really learn about Blues, its roots, I have the pleasure to see shows and talk with legends that play with him such us Bob Stroger, James Wheeler, Rick Estrin, Phil Guy, Eddie C. Campbell and a lot of new musicians and have also the pleasure of work with them as an agent press for example introducing Lorenzo Thompson during 5 years into all the country to people know his work. It was also amazing work as press with Duke Robillard such professional musician and person that in fact in my balance is the most important thing to me. So now I can say that I know what Blues is about.

What has made you laugh lately and what touched (emotionally) you from the local music circuits?
"Laugh and Sad” are a constant when you are working with good and sensitive people. In my case musicians and audience. Touch emotionally to me each time I produce a show and I make a "searching view” of the people smiling or crying or singing as the show goes on. Because I never work during the shows. As I do my work before I like to seat with a cup of wine as possible and delight with the show. I also have a B plan to earn my life because I can't work with shows I don´t fell and I have it as a law into my life.

Then, next day I open my email, social networks and read all congratulations for the show and the grateful of musicians I work with. This is the most emotionally to me as I make all production and press in an independent way putting my soul, shoulder and hours to get the perfect show.

Something funny in my business has not relation with Blues but with entertainment business. In 2003 I was living for a time in Mexico and a friend phoned me to tell me Cirque do Soleil was needing somebody "like me" (lol)  to work temporally while touring Mexico. I have never heard about Cirque cause they have never come until this time to Argentina and there was not many information about it here at this time. So, when she told me I replied obfuscated to my friend Consuelo: Listen, I’m very sorry and thank you my friend but when I was a kid I never want to go to Circus, I don’t like the way they treat animals , no clowns no mummers and don’t like anything about Cirques and I’m independent and bla bla bla... she listen all and then tried to explain to me I go to the interview in a very bad mood as a kid... and I went and at the same time I have the interview I start to work there. I couldn´t believe it, because really that’s was he most amazing work I have in entertainment business in all my live until now and were a before and after in the way of facing my job

If you could change one thing in local scene and it would become a reality, what would that be?              (Photo: Laura with Daniel Raffo & Phil Guy) 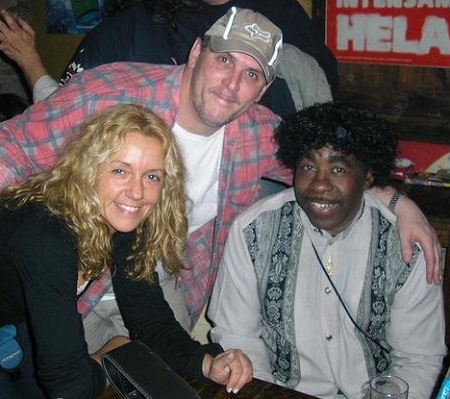 If I could change something in the local scene I should need money lol, because a lot of people has not opportunities of be known and play in good places because most of the people of the music industry here put all the money to do money and not to preserve his local artists. I also lived 4 years in Brasil and I admire them because they support first local musicians and the same way international ones.

I don’t like some way of feeling of most people here that “divides “music into Ghettos. You are this or that and all divisions. If I could change something in my country is that: education about music, same opportunities for all, that is utopia here I think. In my little "garden of people" (as L.A. Spinetta said in a song) I have as my header phrase “ think globally, act locally “ and try to educate always as I can about this always with good troughs and in my little place in the world.