"I miss the sense of feeling connected to that larger thing that goes all the way back. It may because we are just naturally losing our revered icons that brought us this far. I may be completely wrong but it seems to me that our young talent could embrace the past and add their contribution to pay the blues forward." 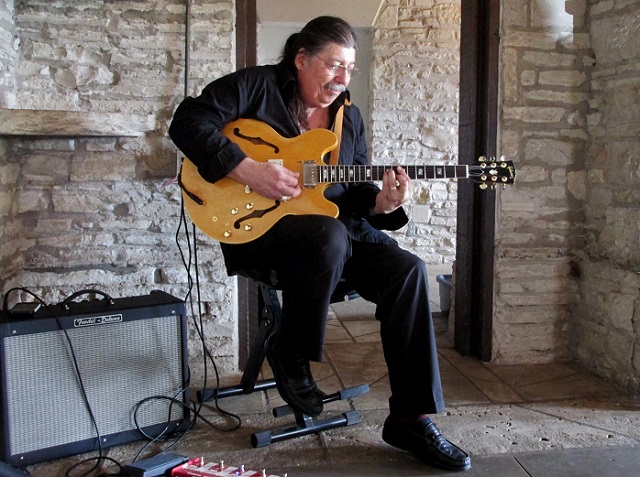 What do you learn about yourself from the Blues and Jazz people and culture?

There is so much to learn from every single player. That’s what I’ve done all my life. I love being a guitar student. It makes me a good teacher. When I was a kid in South Texas, I collected guitar books like most kids collect comics. I’ve been lucky enough to work with a lot of great artists and I try to soak up everything. I feel like the things that stick with me over time were meant to be mine; so, I’ll just run with it. I never want to say, “I know it”. That, to me, is a learning disability.

It’s America to me. Blues are very important to the soul of America. The blues is our cultural elder statesman that deserves to be respected for all it represents beginning with the injustice of slavery of black America. We can hear and feel the methodical work forced upon them (African Americans) from the early ‘field hollers’ that are the first form of the blues. We can never forget that era because we can never allow that injustice in America ever again. All that pain has evolved into an inherent respect and acknowledgement that is the very labor that built America. It’s still there, in every bent note that cries from a guitar, a voice or a harmonica today in the most modern interpretation of the blues. It’s in the jazz players flatted 5th and the blue note in a bebop line. Even when the blues are happy or raunchy, it’s still there. It’s respect and a vow to not forget and go back to that kind of injustice. That keeps America going in a progressive direction regardless of what we have to live through. We have plenty of regressives in America but they are not as powerful as the blues. 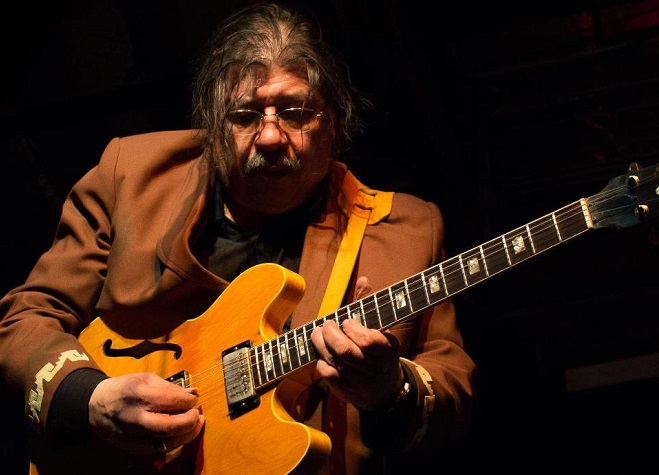 "Blues and Jazz allows us to participate, to the extent that we can, in the Black American experience. I was maybe 13 when I first consciously listened to serious blues. It was profound and educational. It expanded my awareness of our country’s history. There is something so honest about the blues, it wants to carry you to truths. That’s really something. It connects us to our humanity somehow."

What were the reasons that you started the Jazz/Blues researches?

For me it’s all about the sound of the guitar. It mesmerizes me. BB King, Freddy King, Wes Montgomery, Kenny Burrell, Mike Bloomfield, Stevie and Jimmie (Vaughan), Ronnie Earl, Duke Robillard, Denny Freeman, David Grissom, Derek O’Brian, Eric Johnson, Bobby Mack, Rod Prince, Cid Sanchez … so many. I never even listen to the words, truth be told. My ear goes immediately to the guitar. So, like rap is invisible to me. It ain’t even a tune without a guitar. That’s just me.

There is a place right between blues and jazz that knocks me out. You can call it jump or swing or pre-bop jazz. Guys like T-Bone Walker, Tiny Grimes, Lowell Fulson from back when and more current guys like Ronnie Earl, Duke Robillard, Anson Funderburgh, Brian Setzer, Jimmie Vaughan. It’s the blues with a wider palate. It’s like where blues handed off to jazz in our history.

Wow! Big one. It’s hard to put one before the other. As an audio engineer I got to work with Frank Zappa, Jaco Pastorius, Wayne Shorter, Joe Zawinul, George Duke, Herbie Hancock, Harry Befonte, Kitaro, Oh man! on and on. Forty-five altogether I think I counted once. I’ve been so fortunate to have been in proximity to geniuses for whole tours at a time when a principal component of my job was to listen deeply. Every Artist is a mentor if you’re really listening. I have to take the totality of the lessons as one overall experience at this point in my life. The take away thing I appreciate most is the commonality the greatest artists always seem to have. That is, you have to believe in yourself and stand your ground. That is why prejudice and racism is so damaging.  It can take that self esteem away from young impressionable minds. Everyone has a right to feel they deserve to succeed. That self-confirmation should come to us young.

Easy one. “Today is not a rehearsal for tomorrow. It’s today and that is partially used up already. Don’t mess around. Just do it.” Frank Zappa told me that once. I’ll never forget it. Hell, I live by it. 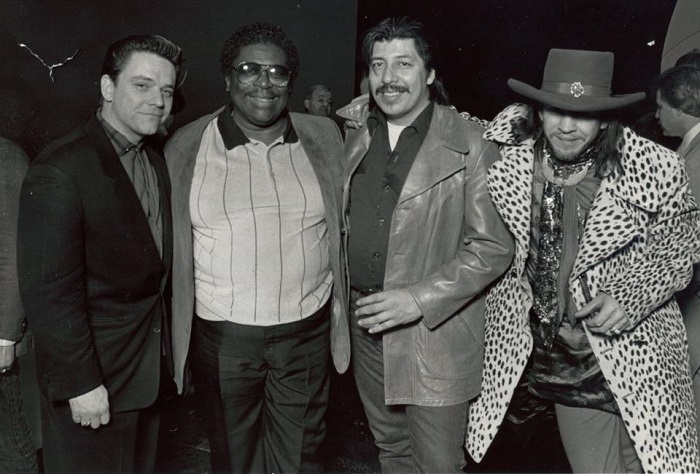 "I would insure that every kid got a good musical education to advance the overall state of music. We have dumbed down so much in our fast-paced society that we have limited our tools for invention." (Photo: Leon Rodriquez with BB King, Jimmie & Stevie Ray Vaughan, Grand ol' Opry c. mid-80s)

Are there any memories from Dizzy Gillespie, Chet Baker and SRV which you’d like to share with us?

Yeah, here’s a good one. I was out on a tour with Stevie’s band, Double Trouble and Jimmies band the Fabulous Thunderbirds. The brothers were doing a bunch of dates together. I was road managing the T-Birds on that one. We were booked to play the newly constructed Grand ‘young’ Opry House in Nashville.  The bill was BB King would open for the T-Birds, The T-Birds would open for Stevie. LOL

Man alive! Are you kidding me?! The Vaughan brothers flipped out. There was no way in hell they were going to let the King of the blues open that show. The Vaughans absolutely refused to play that lineup. They were pissed off about it too. They stood their ground until the very last minute. The promoters finally gave in and the show properly played T-Birds, Stevie, and then of course the King, BB King!  BB graciously invited Stevie and Jimmie out to jam with his band after his show. Man, they wailed. It was magic. What those Nashville guys didn’t get that particular day was that the Blues is a community with its own hierarchy.  Within our community, who in their right mind would betray the King that has influenced everybody? That’s nuts! The blues is alive and dynamic and it’s constantly growing. Why would a leaf who owes what it has to the root betray the root? Duh. Not happening. I was mighty proud of the brothers that day. That’s for sure. The Vaughans are exceptional men in every way.

A connection, I would say. I miss the sense of feeling connected to that larger thing that goes all the way back. It may because we are just naturally losing our revered icons that brought us this far. I may be completely wrong but it seems to me that our young talent could embrace the past and add their contribution to pay the blues forward. There’s a lot of great things happening. I would encourage connections with influences.

There are some ugly things we’re seeing in America right now that are damaging us as a united people. Racist stuff. We’re being divided by demons from the past. My hope is that the impact of it is being absorbed by artists all over the world. My hope is that every artist raises their craft to tamp down the division and call for unity. We are being tried right now. We shall overcome. 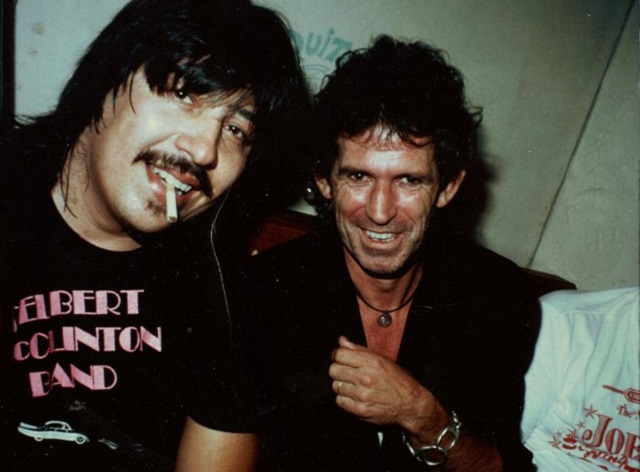 “Today is not a rehearsal for tomorrow. It’s today and that is partially used up already. Don’t mess around. Just do it.” Frank Zappa told me that once. I’ll never forget it. Hell, I live by it. (Photo: Leon Rodriquez & Keith Richards, New York City,  c. mid-80s)

I would insure that every kid got a good musical education to advance the overall state of music. We have dumbed down so much in our fast-paced society that we have limited our tools for invention.

There is nothing that will foster the development of independent thought as well as the subject of music. I’m writing a series of Music Theory for Guitarists books now. We gotta raise the bar up.

What has made you laugh from and what touched (emotionally) you from Frank Zappa and BB King?

“Nobody loves me but my momma, but she might be jivin’ too” - BB King

“There is more stupidity than hydrogen in the universe, and it has a longer shelf life.” -  Frank Zappa

How has the Blues Jazz influenced your views of the world and the journeys you’ve taken?

Blues and Jazz allows us to participate, to the extent that we can, in the Black American experience. I was maybe 13 when I first consciously listened to serious blues. It was profound and educational. It expanded my awareness of our country’s history. There is something so honest about the blues, it wants to carry you to truths. That’s really something. It connects us to our humanity somehow.

If I understand the question correctly, the impact has been profound. Blues and Jazz in America was once called “Race music”; Intended to be isolated so as not to infect and therefore corrupt white Americans with black culture. A couple of centuries later, the last blues revolution we had on this planet emerged from a couple of white guys from Oak Cliff, Texas whom I was lucky enough to know, Jimmie and Stevie Vaughan. You gotta understand Texas is a pretty racist place. How does that work? The Blues and Jazz both, by creating a community within the total population provides a rich soil place to plant seeds of unity, equality, understanding and most importantly the chance to be near and enjoy the Black American experience. It’s educational, we can know by this experience what needs to be fixed. 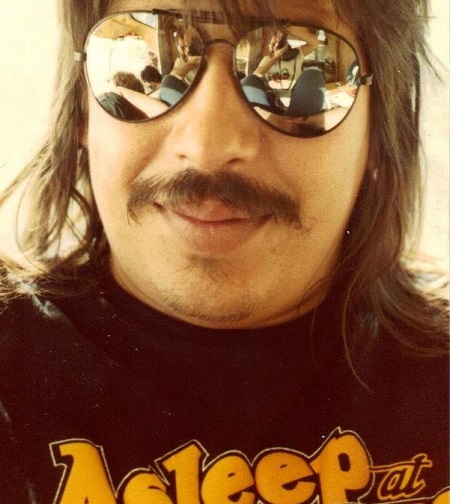 I’d like to be just hanging out in Mill Valley, California in 1967 at Mike Bloomfield’s house as he was writing and rehearsing “A Long Time Coming” Album with a newly formed band, The Electric Flag. Please give me the whole 24 hours, every minute! I want to soak it up. Mike Bloomfield was just coming off a long stint with the Paul Butterfield Blues Band out of Chicago and playing on a controversial Bob Dylan record where Bob played electric rather than acoustic guitar. A lot of folk purists got bummed out. Bloomfield took it further, just like Stevie did. I think Bloomfield changed the way blues guitar was played. He set a new bar with a connected reverence to the traditional genre. He was around for way to short a time. He will always be one the greatest blues guitarists ever. He should be in the hall of fame somewhere.