"I think it’s just reinforced my view that we are all equal, all human and all spinning on the same giant rock, we all share the same hopes, dreams and problems after all."

Drawing from his obsession with pre-war country blues, Half Deaf Clatch (aka Andrew McLatchie) has been impressing audiences all over the UK for the last six years with his raw down-home blues sound and his original song writing. Described as a Slide Stomp Blues Machine he has been nominated in the finals of the British Blues Awards eleven times in the last four years. Not one to rest on his laurels, his new album 'Forever Forward' is released on April 14th this year and has already been critically acclaimed by the worldwide blues music press. Half Deaf Clatch has graced the stages of most of the UK's top Blues events and festivals over the past six years including; Hebden Bridge, Colne, Maryport, Broadstairs Blues Bash, Shetland and Orkney Blues Festivals - and recently played on the daytime line-up of BluesFest at the O2 Arena in London. 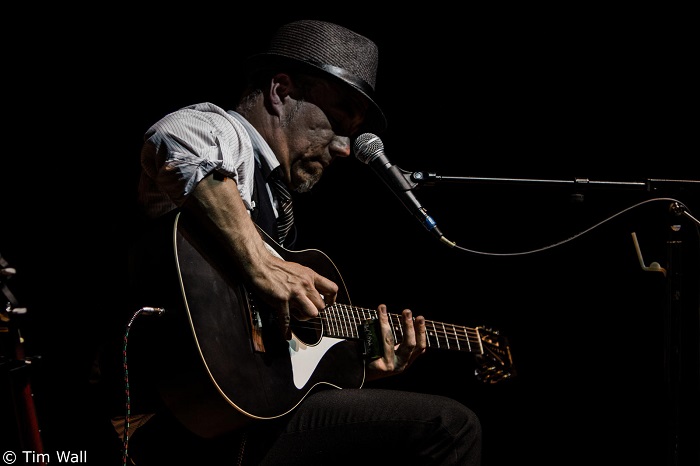 Andrew’s Beelzebub Jones is a Gothic Americana recording project by multi award nominated UK Bluesman Half Deaf Clatch – mixing American Folk, Film Soundtrack (Spaghetti Western), Blues and other acoustic musical styles into one big macabre melting pot and seeing what comes out when it’s all cooked. The album ‘A Good Day To Be A Bad Guy’ released Autumn 2017, a concept album following the character Beelzebub Jones’ trail of murder, devilment and shenanigans during his last day alive on Earth, expect the unexpected!

I think the answer to both parts of that question is self-expression, I strongly believe that Blues music has always been a means of communicating the performers/songwriter’s own thoughts, feelings and beliefs to a wider audience. The best songs will resonate with people if they share a common belief or have lived through a similar situation, but I think an artist’s own self-expression must be the primary reason for writing a song. It’s not all about doom and gloom though, for me Blues music is as much about enjoyment and entertainment as it is ‘truth’ and introspection, it’s about forgetting your troubles and losing yourself in the music, at the end of the day.

How started the idea of "Beelzebub Jones"? How do you describe Half Deaf Clatch songbook and sound?

The Beelzebub Jones project came about as a desire to push myself musically, to write a little outside of the Blues music genre. It’s more inspired by Americana and Film soundtrack compositions, and is a collaboration between myself and the talented author Richard Wall, it’s an exciting project and we’re both really enjoying the challenge. The Half Deaf Clatch songbook is difficult to define, I’m heavily inspired by Pre-War Acoustic Blues and I think that permeates my song writing, I very rarely do cover versions of songs, I prefer to write my own -  and I think the old Blues influences automatically comes through.

There are so many important acquaintances I’ve made over the years, the Blues community in the UK is very strong and supportive, it’s a pleasure to be a tiny part of it. The best advice I’ve been given is “just be yourself”, and that’s what I try to be. This isn’t me acting the part of a Bluesman, it’s me playing music I love – I leave it to other people to define actually what I am. 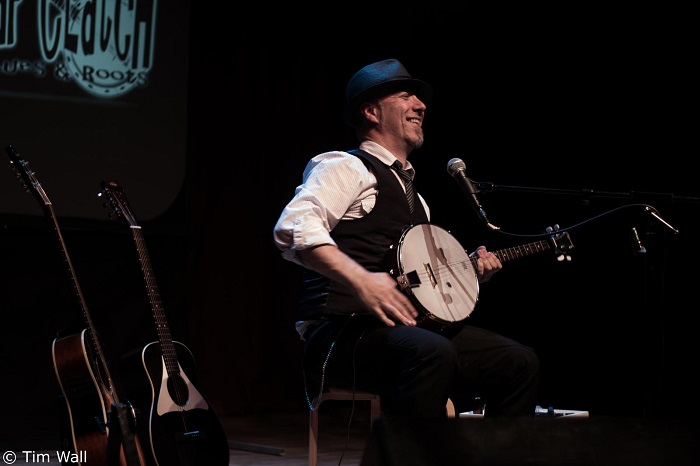 "The slide playing is otherworldly, haunting and beautiful, it’s a slide guitar masterpiece that never fails to move me. The whole American folk music family tree fascinates me and there are so many branches from Blues and Spirituals through Old Time Music and Country, in the early 20th Century there wasn’t even much of a distinction between Blues and Primitive Jazz."

I’ve so many amazing memories, but the one that always sticks out in my mind is the time I played Bluesfest at the O2 Arena in London, I was sat in my dressing room waiting for my time to play and I could hear Van Morrison sound checking right above my head, then on my way backstage Tom Jones walked past and nodded at me. I’m not the type of person to get ‘star struck’ but it certainly was a very surreal experience, and I remember thinking to myself “How the hell did I get here”.

I miss the relevance I guess, I get a bit disheartened when I hear songs by contemporary artists and they’re just regurgitating lyrics from eighty years ago. In its hey-day Blues music was relevant to the audience, Robert Johnson sang about a phonograph because at the time it was cutting edge, today’s equivalent would be someone singing about their mp3 player! If a Blues musician sings about something ‘modern’ nowadays they’re very rarely taken seriously, but that’s what the Blues masters were doing. Blues music should not be a Museum piece. I hope younger Blues musicians understand the need to stay relevant whilst paying homage to what has passed, my fear is that this won’t happen, and the majority of Blues songs will always start with the line ‘Woke up this morning…”

I think that would have to be the ‘value’ we place on music and performers, most of the musicians I know have dedicated huge portions of their life to learning their instruments and craft, and although it shouldn’t be about money the cold hard reality is that money is important if you want to eat. I think musicians are taken advantage of because performing music is viewed as ‘hobby’ and why should you get paid for doing something you love? This is wrong, I think society needs to respect the valuable contribution musicians make to the world.

What touched (emotionally) you from slide guitar? What are the lines that connect: Blues & Americana?

From a Blues fans point of view the first time I heard Blind Willie Johnson’s ‘Dark was the night, cold was the ground’ was the day my musical outlook changed forever. The slide playing is otherworldly, haunting and beautiful, it’s a slide guitar masterpiece that never fails to move me. The whole American folk music family tree fascinates me and there are so many branches from Blues and Spirituals through Old Time Music and Country, in the early 20th Century there wasn’t even much of a distinction between Blues and Primitive Jazz. I think Americana just takes aspects from all of these and mixes them all together, people will argue about the definition and authenticity of a genre of music, but to me it all started from one big melting pot of sounds. 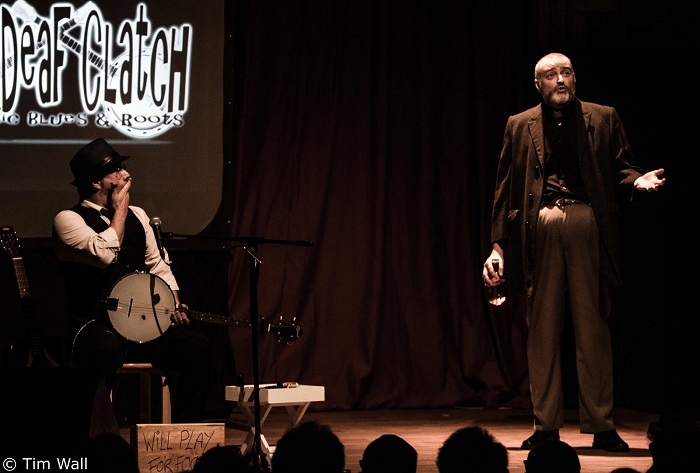 "Historically Blues was very important in all these areas, both in the early 20th Century and again in the 1960s. The Blues Boom of the 60s probably went a long way to bridging the gap between people of different backgrounds, I’m no expert in these things though and it’s a question best left to the scholars."

How has the Roots Blues culture influenced your views of the world and the journeys you’ve taken?

I think it’s just reinforced my view that we are all equal, all human and all spinning on the same giant rock, we all share the same hopes, dreams and problems after all. To me Blues is a world music, it combines elements of African pentatonic scales and syncopation with a more Western song structure (split into 12 bars for instance) which has its roots in Methodist Hymns, the most commonly used guitar tuning in acoustic blues is the Vestapol (open G) tuning which was taken from Flamenco music, and the slide style of playing originated in Hawaii. My musical journey through Blues has led me to examine and appreciate where the music I love actually came from, which is wonderfully complex and unique.

What is the impact of Blues and Roots music to the racial, political and socio-cultural implications?

Historically Blues was very important in all these areas, both in the early 20th Century and again in the 1960s. The Blues Boom of the 60s probably went a long way to bridging the gap between people of different backgrounds, I’m no expert in these things though and it’s a question best left to the scholars.

Good question, probably wouldn’t be Blues related time travel though. I think I’d like to go back to when and where Einstein was formulating his theories on Relativity and spend the day talking about things I wouldn’t understand. I’d like to tell him that his theories are still relevant and still being proven correct. I just think it’d be one hell of a fascinating day! 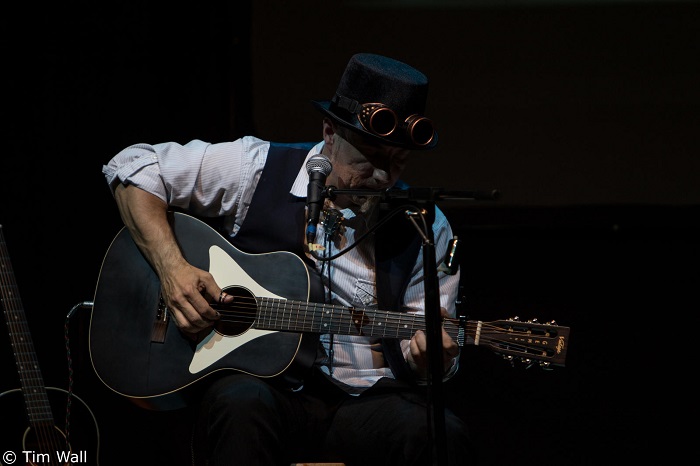