"Water your art with your vital juices. When counterculture became a mass movement in the 1960’s that was the end of counterculture. Now, nerds are the outlaws but even that is becoming co-opted by the advertisers."

Phil Scalia grew up in Baltimore, Maryland in the 60’s where he developed a reputation as a jokester, remembered years later by the humorist Ellis Weiner for Spy Magazine. After high school he travelled out west with poet Joshua Norton, living in Haight-Ashbury and the Banana Patch Commune on the island of Maui, Hawaii. Squeezed in a BA from U of Wisconsin. He worked as a locomotive engineer for Conrail for seven years, decanting the experience into the book of photographs, “Firing” (Harp Seal Editions 1982). He moved to New Hampshire and became a newspaper photographer and a “stringer” for wire services, later opening a commercial studio in the Odd Fellows Hall of Exeter. One day he saw a local writer placing his first novel in the window of the bookstore downstairs. A couple of years later, he photographed this same writer Dan Brown for The Da Vinci Code.      Phil Scalia © self-portrait 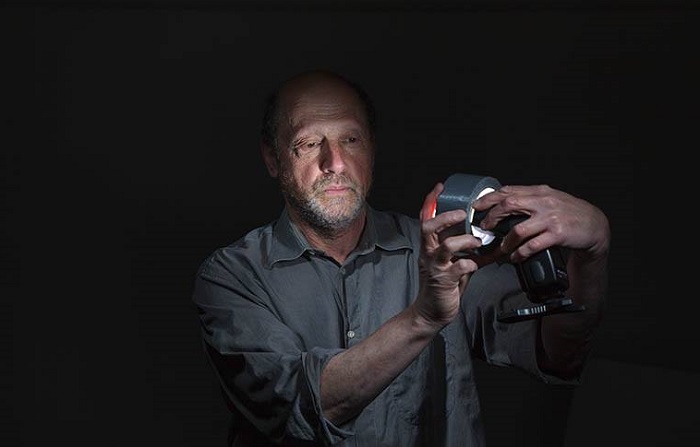 Soon after, Phil decamped to the Mohawk Valley of New York State, where he still tends perennial gardens and fights the gas industry. He published the book “Studies in Racial Senescence” in 2014 and is at work on two books: “Scratch-off Nation” and “The Snows of Canajoharie”. Phil is an Adobe Certified Expert in Photoshop and a member of the NY Arts in Education. Phil Scalia talks about counterculture, poetry, music, the 60s, San Francisco 49ers, Baltimore, John Coltrane, Roxie Powell, Pam and Charles Plymell.

What experiences life have triggered your ideas most? How do you describe Phil Scalia images and artwork?

As a kid I was usually in some kind of trouble in school or at home. I was the class clown and got laughs, but inevitably would take it too far and piss off the wrong people, so I spent a lot of time being punished. In today’s lingo, it would be called “inappropriate” humor. I lacked the necessary filter and am gratefuI that they didn’t suppress behavioral problems with Ritalin in those days.

It took me years to appreciate that my work was coming from this same place. I take pictures that strike me as funny. Over time, the comedy turns into tragedy, which I suppose is one way of defining irony. The black humor acts as a firewall against a rather depressing reality, which is that I live in the Rust Belt, literally surrounded by vacant and collapsing Italianate mansions.

That said, the landscape I shoot comes from a different place; it is more about escape – from levity, from news, from analysis – into reverie.

What do you learn about yourself from the poetry and what does ‘Outlaw/Counterculture’ poetry mean to you?

Water your art with your vital juices. When counterculture became a mass movement in the 1960’s that was the end of counterculture. Now, nerds are the outlaws but even that is becoming co-opted by the advertisers.

What were the reasons that you started the avant-garde artistic researches and experiments?                  Phil Scalia © self-portrait 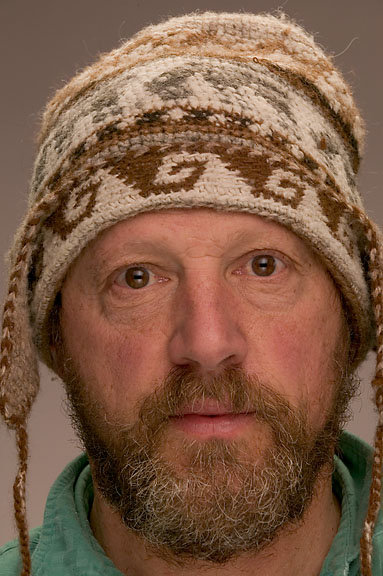 Every picture I take is a spoke in a big wheel. I shoot stock and commercial photos for money, but the work that often resonates are photos that I take on the way to other photos. I like pictures that have a rough quality. You need to have control in order to lose control. Then again I look at the Becher school with their razor-sharp 8X10-foot prints and am humbled. So a photo can be good in many ways. A book of photos is a different animal; it’s more about how they hang together. The whole is greater than the sum of the parts. The better the book, the more irrelevant it might seem when you first look at it. It’s the qualia of the thing, you can only access it metaphorically, if even. It’s like a Republican presidential candidate answering a question. Now that’s funny!

Grew up around Baltimore listening to great soul stations on the AM radio. There were 3 of them – WSID, WWIN and WITH. I would catch the Number Seven bus into city, down Liberty Road and Pennsylvania Avenue where Billie Holiday, Cab Calloway and Chick Webb all grew up. Kids would get on the bus and start singing, and I swear they were better than the Temptations. It makes you wonder, so much talent goes undiscovered. Baltimore was one great town in those days.

When I was shooting Understory, a sound was in my head. It was Debussy’s Nuages, from the Nocturnes. I listened to that every day back then. Even now, at least once a year I will turn off the lights, lie down and listen to it. And I always hear something new. Later I read that John Coltrane loved Debussy, which made me feel like something came full circle, because I discovered John Coltrane in a record store across from the Baltimore Civic Center while in high school. It was the album Africa Brass.

What is the impact of music on literature? What are the lines that connect the Blues/Jazz/Folk with the poetry?

Music precedes literature. Perhaps because it is mathematical at heart? I don’t know. Poetry gets its metre from jazz, like bebop for instance. It all starts with music which gets your blood pumping. You have to dance before you can run. Poets are cats, novelists are dogs. In its esthetics, photography is closer to poetry than it is to painting. 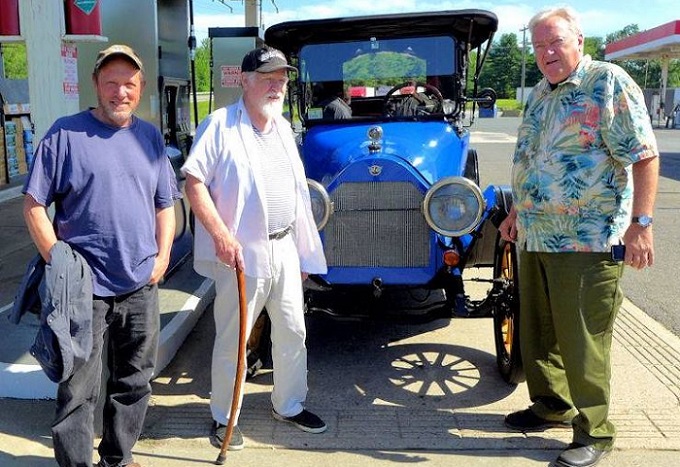 "Poets are cats, novelists are dogs. In its esthetics, photography is closer to poetry than it is to painting." (Photo © by Mark Hanlon -  Phil Scalia, Charles Plymell and George Laughead)

Which meetings have been the most important experiences? What touched (emotionally) you?

Life turns on a dime. Chance encounters. I went to a New Year’s Eve party on 12/31/69 and met both Joshua Norton and Charles Plymell. Josh became my mentor, taught me everything I know. Before his early death, Josh started Cherry Valley Editions with Charley and Pam Plymell in the mid-70’s. Fuck Reagan, Charley is the Great Communicator and the necessary fulcrum for so many writers and artists. Charley and Pam and Roxie Powell have made massive gravity waves in my life. Rox and I do this book exchange thing – physics, history…. Roxie is probably the most erudite person I know, and certainly the master raconteur. But it all started with Josh. I owe him everything, the “little old man” probably saved my life.

What do you miss most nowadays from the art of past? What are your hopes and fears for the future of?

If I read another review of a book of photos being about “memory and identity” I’m going to puke! It’s so concept-driven today, but the photos themselves sometimes aren’t very good.

It’s not news that we’re awash in images. Eventually the cameras will be imbedded everywhere and everything will be a photo. What this portends I have no idea. Image fatigue, perhaps.

I’d like to be playing middle linebacker for the San Francisco 49ers, I could change the world with my brilliant play!             Phil Scalia © self-portrait 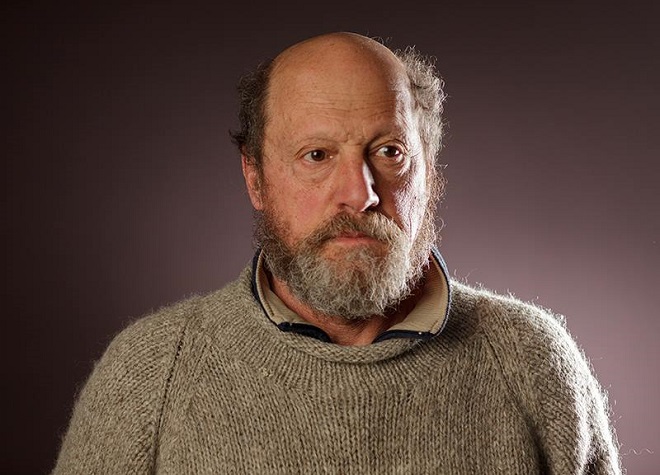 "Every picture I take is a spoke in a big wheel. I shoot stock and commercial photos for money, but the work that often resonates are photos that I take on the way to other photos. I like pictures that have a rough quality. You need to have control in order to lose control. "

What is the relationship of Beat movements to the racial, political, and socio-cultural implications?

Beats were before my time. But I don’t think they were a movement per se, just an extended group of crazy friends who captured the soul of the times they lived in. There’s always a splinter group of artistes, whatever it happens to be called at the time. The “freaks” of the 60’s were more of a mass movement.

Mom used to say, “Dress to please others, eat to please yourself.” I should have taken her advice!

Laugh at your foibles, they are universal.

Where you really want to go with a time machine and what memorabilia (books, records, photos) would you put in? 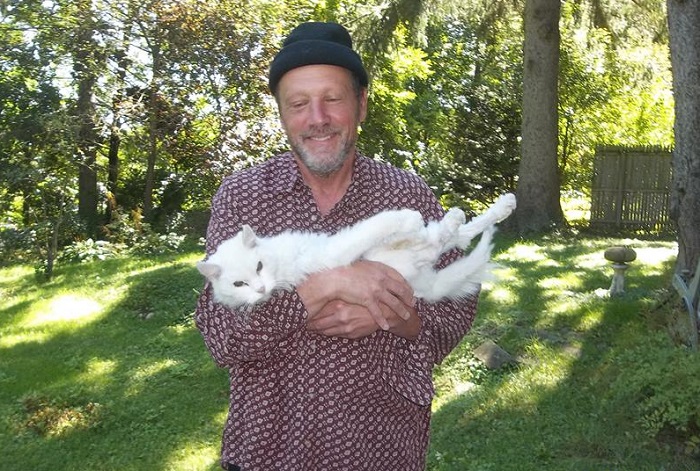