"I would like to see more emphasis placed on the roots of modern music, so that young people would be encouraged to dig a little deeper into what they are hearing."

It’s no accident that Sean Carney’s career has been arcing steadily upward. The Columbus, Ohio bluesman has it in his family genes, with jazz horn players in the previous two generations. Onstage locally he mastered his craft backing a wide array of local and national R&B greats such as Christine Kittrell and Jimmy “T-99” Nelson and making it known that he was a skilled and tasteful guitarist and vocalist. In 1998 he recorded his debut album 'Provisions'. He gained exposure and experience serving as Teeny Tucker’s musical director and co-writer. Offstage he was a tireless advocate for those same artists, the blues and jump they represented and the area’s musical heritage, writing articles, being a dj, promoting concerts and serving three terms as President of the Columbus Blues Alliance.  Photo by Michael Gruber Sean’s profile has gotten a major boost in the last five busy years, and in fact is decidedly international these days when European tours often in the company of major historical figures have become almost routine for him. Drummer Eric Blume, who performed with Sean for over a decade, and Sean founded Nite Owlz Records in 2006 and issued 'Life Of Ease'. He won the Albert King Best Guitarist award and took first place at International Blues Challenge (2007), and relesed the album 'Blues For A Cure'. In 2009 his Canadian recording 'Live Blues On Whyte' come out. He has performed worldwide with Big Joe Duskin, Duke Robillard, Charlie Baty, Willie Pooch, Hank Marr, Joe Weaver, Johnnie Bassett, “King Saxe” Gene Walker, Sir Mack Rice and Hal Singer as well as his own group. With his studio recordings with Duke Robillard and Jimmy Thackery, Sean reaffirms his importance and value as a part of the blues scene he has supported so tirelessly for so long. Recently, Sean Carney released an album with Shaun Booker, titled "Blue Plate Special" and he will be again in Europe (France, Greece, Belgium, Finland) for one more successful tour. (Bio-based Dick Shurman's info/texts)

The most important thing I have learned is that blues is about honesty, so I start with being honest about who I am and where I come from. I don’t expect anyone to believe that I have ever worked on a farm or lived in the American south, so I would never try to sell that idea in my own song or cover a song that conveys something that isn’t true and real in my own life. I was really lucky to have been mentored by R&B pioneer, Christine Kittrell, and she taught me that in her own philosophy; “If I can’t feel a song, I don’t sing it.”

What were the reasons that you start the Blues researches? What characterize your sound and songbook?   (PHOTO: Sean Carney, by Dusty Scott) 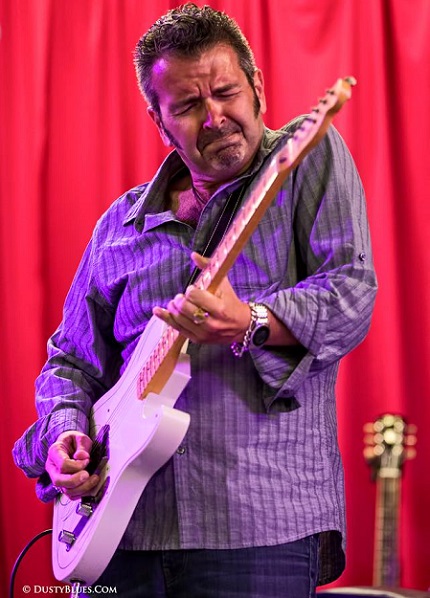 It was never my intention to research the blues, but I love history and naturally with blues, there is plenty of great history, so I just dove right in. As a young man, I became interested in the blues history of my own area in Ohio and became aware of artists like Stomp Gordon, Larry Darnell, Hank Marr and Rusty Bryant who were from my hometown Columbus and I learned about the overall importance of Cincinnati Ohio’s King Records in the grand scheme of R&B, blues and even country and western! My sound is largely defined by The Ohio sound, people like Hank Marr and Gene Walker who blurred the lines between blues and jazz.

I was born in 1972 and felt that I was really lucky as a young man in the early ‘90’s to get to be exposed in person to a handful of surviving R&B pioneers who are all but gone now. I got to perform with and learn from Christine Kittrell, Joe Weaver, Jimmy “T-99” Nelson, “King Sax” Gene Walker, Big Joe Duskin, Sir Mack Rice, Johnnie Bassett and Jimmy Witherspoon and got to open for and meet people like Charles Brown, B.B. King and “Gatemouth” Brown - they don’t make them like that anymore! Joe Weaver might’ve given me the best advice; “Make a joyful noise!” Mr. Weaver lived that, he always dressed like a million bucks, always had a big beautiful smile on his face and was always ready to put on the very best show that he could. He made every song and every show extra special.

Several years ago, I had the great honor of recording with one of my musical heroes, Duke Robillard, for Blues For A Cure “Blues Cures Volume Three,” and it was an incredible milestone in my career, made even more special by the fact that my father, Larry Carney, also played bass on the track that Duke and I recorded together. Through Blues For A Cure, I also had the incredible honor of recording with another hero, Jimmy Thackery as well as the incredible and truly legendary Henry Gray! It’s also been a great experience to record with my contemporaries like Jonn Richardson, J.P. Soars, Damon Fowler and Victor Wainwright. 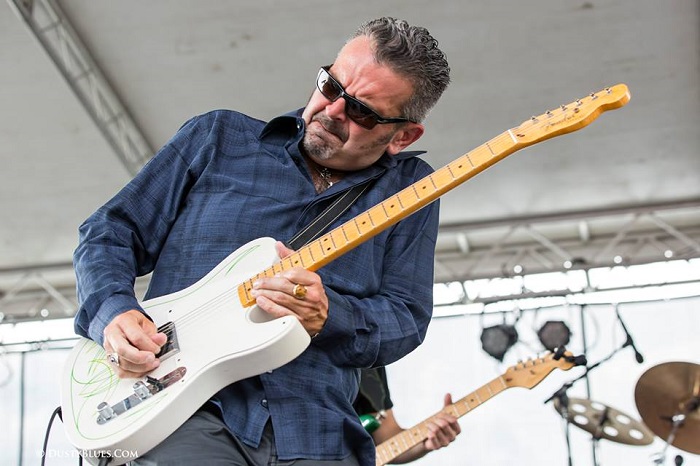 "It’s cool to survey a given blues audience in my own mind and ponder the different political leanings that all come together to enjoy the blues." (PHOTO: Sean Carney, 2015 by Dusty Scott)

I miss being able to play with people like Christine Kittrell and Jimmy “T-99” Nelson and the special feeling that I got from them. I give back with a program in Columbus, Ohio called CAMP Blues at The Jazz Academy. My band mates and I work with young instrumentalists and singers for one week to prepare them for a recording session and a performance at The Creekside Blues & Jazz Festival! The program has been going for eight years and we have already seen a generation of young professionals come out of the program and it is pretty exciting to be a part of bringing blues to the next generation.

I would like to see more emphasis placed on the roots of modern music, so that young people would be encouraged to dig a little deeper into what they are hearing. Thinking about people my age and the music they listened to and what they are now playing for their kids is a scary thought!

Make an account of the case of the blues in Ohio and what touched (emotionally) you from the local scene?

Well, it as quite a scene in Columbus, Ohio in the early ‘90’s when I was coming into my twenties and I was lucky that my uncles David and Dan had a well established band called The Joint Rockers that I was able to jump into eventually. I learned a whole lot playing with The Joint Rockers and it prepared me for eventually fronting my own band.  But, back the ‘90’s I was opening for people like Ronnie Earl & The Broadcasters, Duke Robillard, Robert Lockwood, Jr., Lonnie Mack, Luther Allison Anson Funderburgh & The Rockets and Gatemouth Brown and it was an amazing education for a young guy who loved blues. 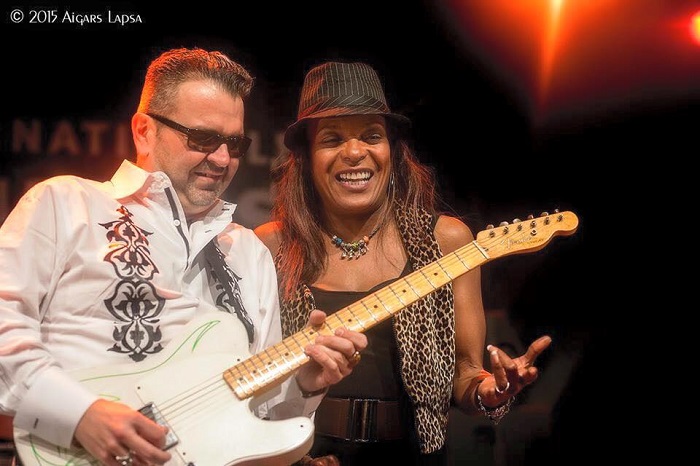 "My sound is largely defined by The Ohio sound, people like Hank Marr and Gene Walker who blurred the lines between blues and jazz." (PHOTO: Sean & Shaun Booker, by Aigars Lapsa)

What has made you laugh from your experiences with Big Joe Duskin, Johnnie Bassett, and Sir Mack Rice?

Big Joe told me about opening for Muddy Waters and how Muddy asked Joe earlier in the night to find him a girlfriend. Well, Joe knew all kinds of different people because he had been a police officer, so Joe finds a very large lady that he knew and instructed her to casually sit on Muddy’s outstretched knee as he drank and played cards before the show. When Muddy said, “Who are you?” She said, “I’m your girlfriend!” I guess Muddy jumped about ten feet in the air!

Johnnie Bassett was a very sober guy, no drinking or anything like that. He told me that after the gig, he liked to go to his hotel room, turn on the television and look for a big rock. Eventually, some cowboys would probably emerge from around the rock and start shooting!

I played with Sir Mack Rice at a big blues festival in Florida and the promoter came on the stage and apologized that Sir Mack was nowhere to be seen. Just as the crowd seemed to sigh, Mack is whisked to the stage in the back of a vintage Mustang convertible!

Well, I feel like blues is truly one of those things that brings a lot of different people together. It’s cool to survey a given blues audience in my own mind and ponder the different political leanings that all come together to enjoy the blues. I feel like it is our job as musicians to spread happiness and encourage people to get together. That job is more important today than ever before.

Central Avenue in Los Angeles, California on a Saturday night in 1947! 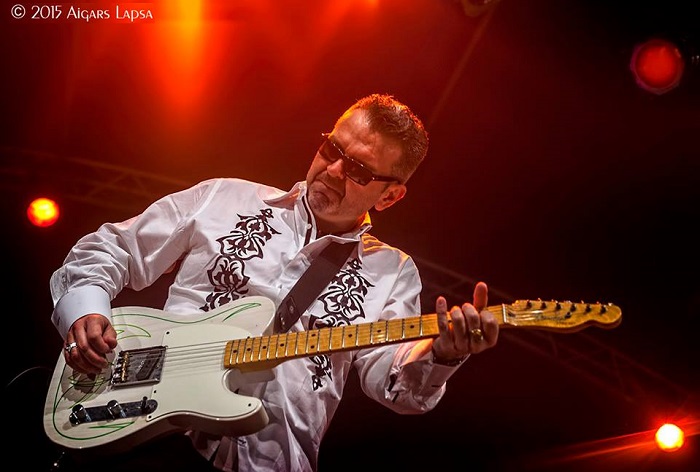