"From blues and rock and roll, I learned that making every note matter brings great insight into our lives, our shared humanity and concerns. It brings Joy, rhapsody, and peace of mind to the listener. These forms of music teach us to be our better selves." 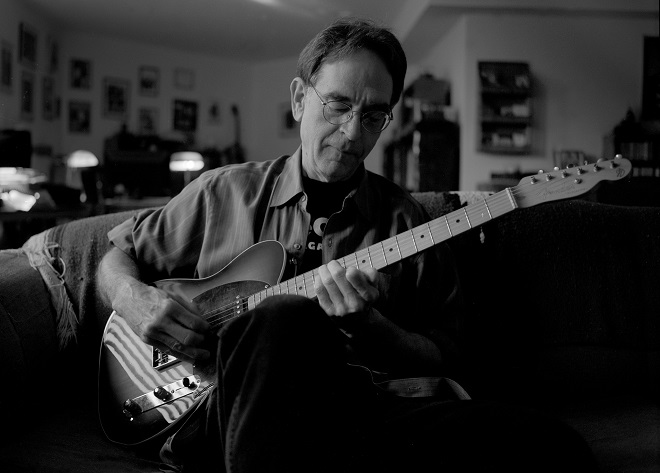 He wrote the liners for Robert Johnson’s King of Delta Blues, Blind Willie Johnson’s Dark Was the Night, and John Lee Hooker’s 50 Years: John Lee Hooker Anthology, and produced DVDs and CDs for Buckethead. His books include Blues Guitar: The Men Who Made the Music, My Son Jimi [co-authored with James “Al” Hendrix], Rollin’ & Tumblin’: The Postwar Blues Guitarists, Masters of Heavy Metal, and Early Blues: The First Stars of Blues Guitar. His next book, Talking Guitar: Conversations with Musicians Who Shaped 20th Century American Music, will be published by the University of North Carolina Press in April 2017.

I discovered the blues one evening during the fall of 1966, when John Lee Hooker performed at my high school in Detroit. Mr. Hooker had recently released his excellent Live at Café Au Go-Go album, which featured the Muddy Waters band. The evening I saw him, he performed most of the songs on that album, but without a band – it was just John Lee and his electric guitar. He often closed his eyes and kept time with his feet – it was mesmerizing! His music took me to a place I’d never been before, although I did recognize some of the songs he played from covers done by the Animals and other bands. Within a couple of days, I went out and bought my first blues albums. I’ve been buying them ever since. Little did I know that decades later, John Lee and I would become friends and do many interviews together.

During my twenty years as an editor for Guitar Player magazine, John Lee Hooker, B.B. King, Luther Allison, Johnny Shines, and many other bluesmen explained to me that they saw the blues in the same way that I instinctively understood it – as music of celebration, of unlimited expression, and of great power and beauty. To them, and to me, it’s never been music of “oppression.” Even today, you can go to parts of rural Mississippi and see blues performers in juke joints on Saturdays and Sundays. The local workers come to these evens to relax, have fun, drink moonshine, and dance – just like people did a hundred years ago.

Rock, in its best forms, shares these qualities of celebration. From blues and rock and roll, I learned that making every note matter brings great insight into our lives, our shared humanity and concerns. It brings Joy, rhapsody, and peace of mind to the listener. These forms of music teach us to be our better selves.

Which musical acquaintances have been the most important?

I’ve interviewed over 700 musicians since the 1970s, so it’s kind of hard to choose who is the most important. Everyone is important, but in a combination of areas unique to them. It’s easier to choose my favorite interviews. Two musicians were remarkable for their insight and ability to speak in perfect English: Andy Summers and Keith Richards, who need no editing. Gatemouth Brown always managed to teach me life lessons when we were together. Eric Johnson stands out for his warmth and friendship, and what an exquisite player! James Honeyman-Scott from the early Pretenders had the sweetest personality. Ry Cooder is always great to talk to because of his deep knowledge and passion for early blues and roots American music. I only spent one day with Rory Gallagher, a great favorite of mine, but I just loved talking to him. My favorite interviewee of all, though, is probably John Lee Hooker, who epitomized my concept of what a good man is all about. 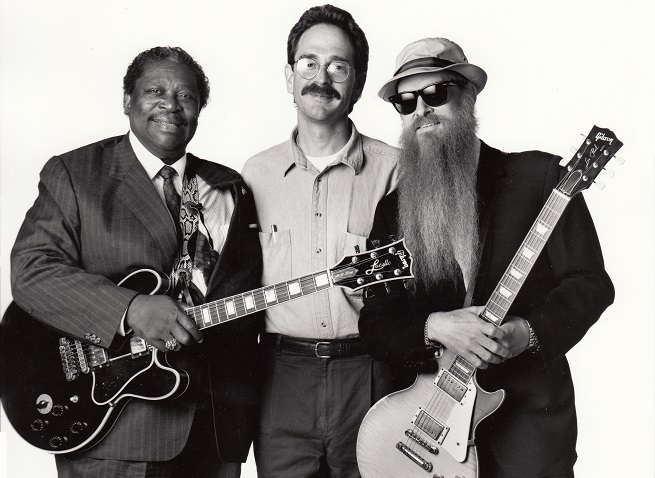 "During my twenty years as an editor for Guitar Player magazine, John Lee Hooker, B.B. King, Luther Allison, Johnny Shines, and many other bluesmen explained to me that they saw the blues in the same way that I instinctively understood it – as music of celebration, of unlimited expression, and of great power and beauty." (B.B. King, Jas Obrecht, Billy Gibbons - Photo © by Bill Reitzel)

Transcribe your own interview tapes – you’ll quickly learn when to shut up and let the other person finish what he or she is saying!

I miss the musicians I’ve know who have died. When I flip through my address book from the 1970s-1990s, I see so many names of people I knew and was close to, but they’re gone now. The people I miss the most are Nick Lucas, Ricky Nelson, John Lee Hooker, Rory Gallagher, Johnny Winter, and a few others. The world was a better place when they were here.

Looking at the question from another angle, I miss the spontaneity that existed on recordings before the invention of multi-tracking. When you hear 78s of Louis Armstrong, Bessie Smith, Blind Lemon Jefferson, Charlie Christian, etc., you are hearing people playing in real time. In some significant ways, multi-tracking, digital recording, and auto-tuning have diminished the power of music.

I’d figure out a way to prevent the widespread bootlegging of music. Here’s what I am talking about: About eight years ago I produced some DVDs and CDs for Buckethead. With the last CD we did together, From the Coop, the world’s first copies showed up at my house on a Thursday. On Friday morning I sent out about ten review copies to various magazine and forums. By Tuesday, at least a dozen sites around the world were offering free downloads of the CD. This notion that all music should be free makes it very, very hard for musicians to make a living. 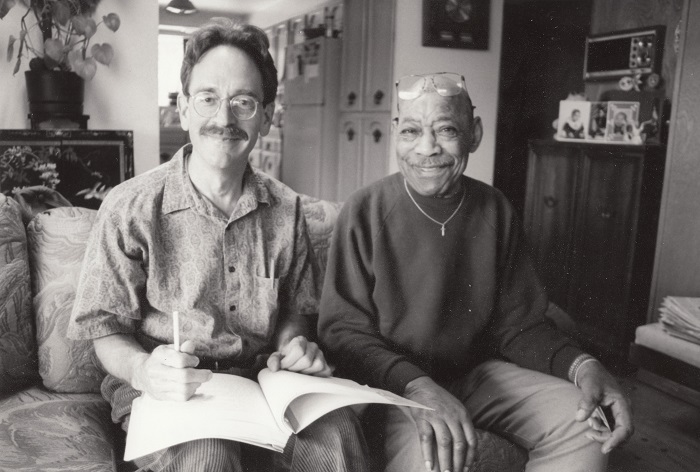 "I miss the musicians I’ve know who have died. When I flip through my address book from the 1970s-1990s, I see so many names of people I knew and was close to, but they’re gone now." (Jas Obrecht and James 'Al' Hendrix - Photo © by Saroyan Humphrey)

Which interview touched (emotionally) you most?

Two of them. When I interviewed Randy Rhoads’ mother not long after he died, and she cried while recounting getting the phone call about the plane crash. The other was when I was working on the book My Son Jimi and I asked his dad, Al Hendrix, how he got the news of Jimi’s death. After he explained, we sat there in silence in his living room for a while afterward. It was difficult for Al.

I’d need to write a 400-page book to properly answer this question.

The birth of my daughter Ava in March 1995. All of a sudden I was no longer the center of my life – Ava was. And that’s been for the best ever since! Existing for the benefit of others, to me, is the best way to live life.

What do you think is key to a life well lived?

I’d like to spend a day with Bob Marley at his home in Jamaica, watching him write a song like “No Woman, No Cry.” That’s my idea of heaven. 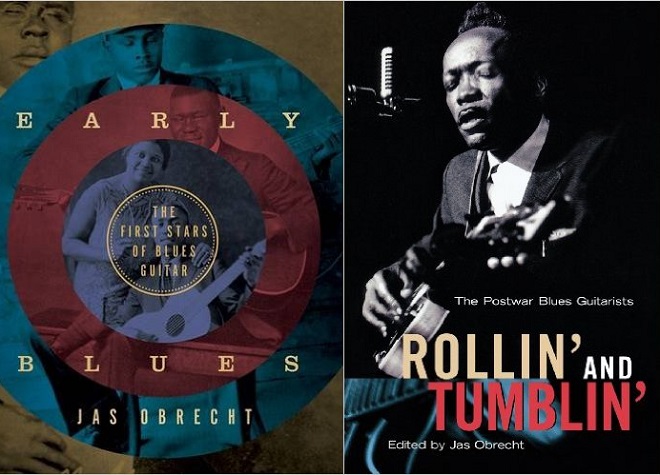