Powerhouse pianist Clay Swafford talks about the expression of Blues, Pinetop Perkins and the 88s keys

"The blues can give you a hug and tell you it is going to be OK, the blues can be a shoulder to cry on or it can be a friend to laugh with. You can’t get enough of it."

Clay Swafford: The Blues is Okay!

Firmly rooted in the blues tradition, Clay Swafford was raised in the small rural community of Providence, Alabama. Born into a musical family; he was immersed in the sounds of Baptist Hymnals, Country and Bluegrass. He took interest in the piano at an early age and, after hearing the music of B.B King and Bobby Blue Bland at age 15, Clay was hooked on the blues. At 16, he attended the Pinetop Homecoming Celebration and promptly found himself on stage with many of his idols. In 2005 (age 20), the hard work paid off: Clay was asked to be a part of the boogie-woogie piano documentary “Falsifyin” alongside Jerry Lee Lewis, Pinetop Perkins, Marcia Ball, and Henry Gray. Since then Clay has appeared at major festivals all over the south, played regularly with Willie "Big Eyes" Smith and numerous other blues legends, and earned the respect of blues musicians everywhere he played.

Clay’s debut album, “Rooster,” is an electrifying opus of blues traditions and innovations, feature a stellar cast of guest artists including Blues Music Award winners Diunna Greenleaf, Bob Margolin, and Bob Corritore. The blues world should hold on to their hats. Clay Swafford is bursting onto the scene.

When was the first time you felt the need to play the blues? How has music changed your life?

I first heard the blues when I was around 15, I heard a Bobby Bland CD and when I heard “I Smell Trouble” it hit me like a hammer. It was so pure and soulful. The first time I heard Bobby Bland sing I felt the need to play the blues. I knew there was something deep about the music and I wanted to find out what it was and experience it myself.

How do you describe Clay Swafford sound and progress, what characterize your music philosophy?

Everything I play I want to come out “deep and soulful” and that’s how I would describe my sound. I pay close attention to how I touch the piano, playing the right notes is important as well as knowing the right time to play them so it touches the soul. 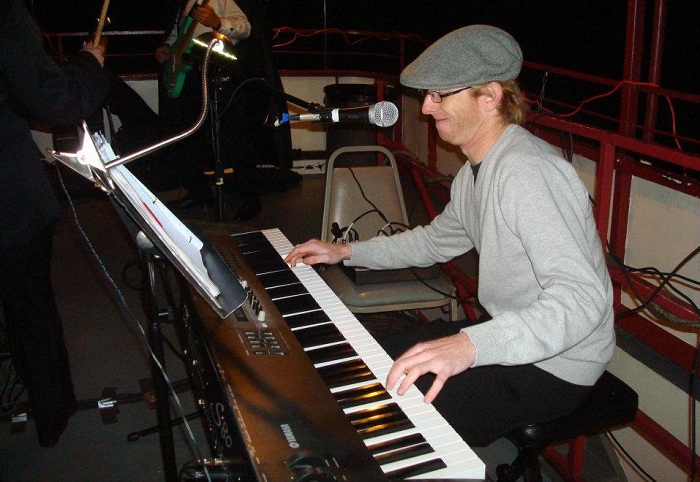 "88 black and white keys means peace to me. When I’m sitting behind those keys I’m in a peaceful place and my soul is at peace."

The biggest thing the blues has taught me is “expression.” There have been times in my life when I have had trouble expressing myself and the blues gave me an outlet to express my deepest feelings and get them out in the open. That is what the blues means to me, being able to express yourself whether you are happy or sad. You can say a million things with the piano and never speak one word. It is a beautiful thing.

One of the more interesting parts of my life would be how I got into the blues, I come from a musically rich family and have been around music my whole life but the journey into the blues was so different from the Appalachian and mountain music I was used to hearing. I went searching locally for people who knew something about blues and it was interesting to me that no one around me seemed to know anything about this great music. The best moment of my career was meeting the musicians I looked up to that had changed my life and getting to share the state with them and having them leave us has been the worst moment of my career. It is tough to watch something leave your life that made such a strong impact on how you live your life.

Why did you think that the boogie-woogie and blues music continues to generate such a devoted following?

I think it is because the blues speaks to the soul. Everyone wants to feel good deep down in their soul and blues music touches the soul. The blues can give you a hug and tell you it is going to be OK, the blues can be a shoulder to cry on or it can be a friend to laugh with. You can’t get enough of it. 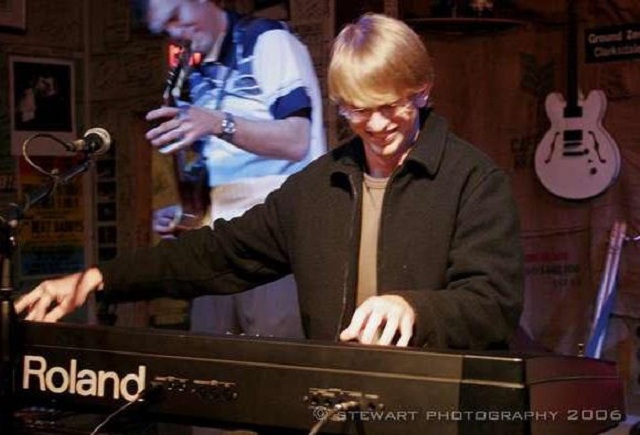 "There have been times in my life when I have had trouble expressing myself and the blues gave me an outlet to express my deepest feelings and get them out in the open."

Do you remember anything funny from studio with Diunna Greenleaf, Bob Margolin and Bob Corritore?

There was one incident that was funny at the moment and ended up being a very special moment. Towards the end of the session on the first day I was just messing around on the piano playing “Amazing Grace” I played a very deep version of it and when I finished playing everyone in the control room was laughing because they noticed that the tape was still running and they were able to capture the whole performance. It ended being a great track on the album.

I played at the Bradfordville Blues Club in Tallahassee, Fl, when I was about 16yrs old with Bob Margolin, Bob Stroger, Willie “Big Eyes” Smith, and Hubert Sumlin. It was one of the best jams I’ve ever been on. One of the most memorable gigs I’ve experienced happened at my CD release party in Clarksdale, MS, at Ground Zero Blues Club. So many great musicians came out and played with me it was a really special moment to play with the likes of Bob Stroger, Bob Margolin, John Primer, and many more to look out and see Maria Muldaur dancing with her tambourine while I was playing was amazing it was a really special night.

Being around the early delta bluesmen, such as Pinetop Perkins, have been the most important experiences to me. I learned a lot about music through Pinetop but most importantly I learned a lot about life. The best advice I’ve been given was from a man in the Dallas airport who without knowing I was a musician came up to me and gave me a handmade flute and told me to always challenge myself and don’t let anyone take your music from you. 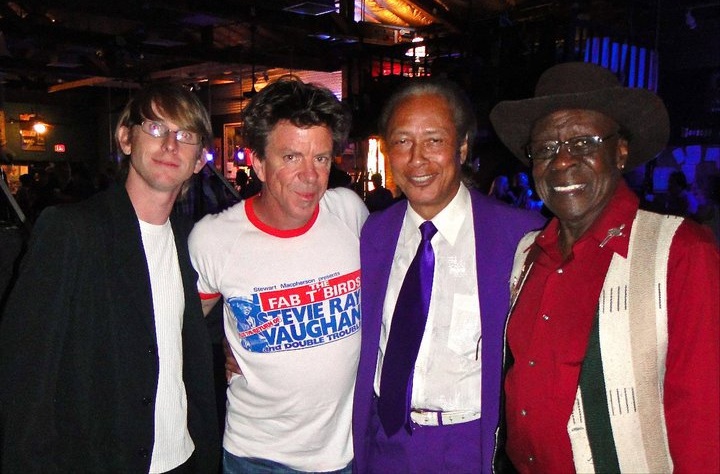 "There have been times in my life when I have had trouble expressing myself and the blues gave me an outlet to express my deepest feelings and get them out in the open." Photo: Clay Swafford with Chris Layton, Jimmy Mayers and Bob Stroger

The blues these days are very guitar driven, there are still several piano players but the piano doesn’t seem to have the importance as it once did. I hope in the future that more kids take to the piano and keep the music going. I’ve been teaching piano workshops for the Pinetop Perkins Foundation in Clarksdale, MS and Centrum in Port Townsend, WA and it is so rewarding to see you kids taking up the piano and taking interest in piano blues and boogie woogie.

Willie and Pinetop were close to me and I got to spend a lot of time with them and have some great memories from the times we spent together. I did a tour with Willie ‘Big Eyes” Smith in Texas shortly before he passed away. Playing music with him was always a treat but riding in the van with him from gig to gig listening to him tell stories about when he played with Muddy Waters was amazing. I flew out to Phoenix for a show with Pinetop and got to spend a good bit of time hanging out with him. One of the best moments was sitting in his hotel room with him playing cards and eating McDonalds, I’ll never forget those times. I haven’t spent much time around Jerry Lee but watching him play at Ground Zero Blues Club was amazing, he played like he was 18yrs old and the club was going wild.

What are the lines that connect the legacy of Blues with barrelhouse and continue to Jazz and boogie-woogie?

I think a lot of piano players started with the blues and it carries over to other styles as music progress. Oscar Peterson for example is one of my favorite jazz piano players with that being said he is also an amazing blues player and a very good boogie piano player as well. Blues is the root and it hold all progressive styles of music together. 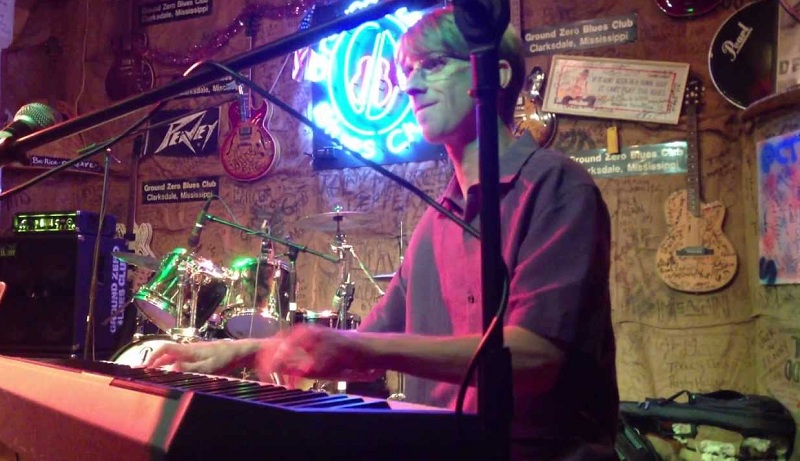 Do you know why the sound of piano is connected to the blues? What are the secrets of?

For me the piano is such a great instrument for the blues because you are able to have a whole band at your fingertips. You can be the bass, drums, rhythm, and lead all together. It is the only instrument that gives you such diversity.

What is your music DREAM? What does “88 Black & White Keys” mean to you? Happiness is…

My music dream is to be remembered for playing deep soulful blues, I never strived to be flashy or over the top. I think the music often gets lost in the show. When I’m no longer on this earth and people think of Clay Swafford I want them to say “Clay Swafford played some of the deepest blues I ever heard played on piano” that would mean a lot to me. 88 black and white keys means peace to me. When I’m sitting behind those keys I’m in a peaceful place and my soul is at peace.

All of the great piano players you to have piano parties in Chicago, Sunnyland Slim, Little Brother Montgomery, Blind John Davis, they all use to get together and one another’s house and play piano all day. I would love to take a trip back in time and set in on one of those great piano parties. 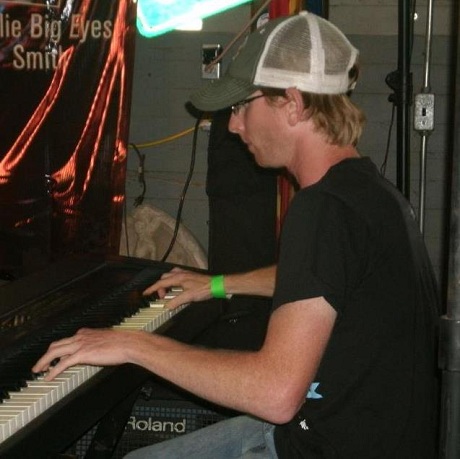 How you would spend a day with Otis Spann? What would you like to ask Bobby Blue Bland & B.B. King?

If I could spend a day with Otis Spann I would like to just sit down and let him play for me and talk about his music and tell me what certain songs meant to him. I would like to learn where he learned to play piano and how he came about his sound. If I could ask B.B King and Bobby Bland one question it would be “Hey guys can I play a couple of songs with you”.