"The Beats and music are connected through poetry, purity, ingenuity, experimentation, all with a childlike sense of abandon and absorption in whatever milieu they find themselves."

Nancy Calef: The Way of Peoplescapes

Nancy Calef is a contemporary American figurative painter and author. Her work is distinguished by the technique of sculpting off the canvas with clay to produce paintings in three-dimensional high relief. Calef is also a singer/songwriter. Born in New York City, Calef graduated from the Bronx High School of Science at age 15 and received a scholarship from the College of New Rochelle to study painting and sculpture. She exhibits widely in museums and galleries in solo and group shows. Calef has lived in Europe and Thailand and has traveled throughout the U.S., Mexico, Central America, Southeast Asia, India and Nepal. She has lived in San Francisco since 1977. Calef’s studio is in the city’s North Beach district where she exhibits in numerous galleries and the Beat Museum. Calef is co-author with Jody Weiner of Peoplescapes: My Story from Purging to Painting. The memoir chronicles Calef’s evolution from child model suffering anorexia and bulimia, through recovery and maturation into a multi-disciplined artist. The book contains 149 color images of her 3D oil paintings. “Expressing myself through art provided a foothold to wrestle my self-destructive demons and connect to the world. I channeled those negative impulses into disciplined production,” Calef was quoted as saying in an article about her in the San Francisco Chronicle.                 Nancy Calef  / Photo by Dennis Hearne 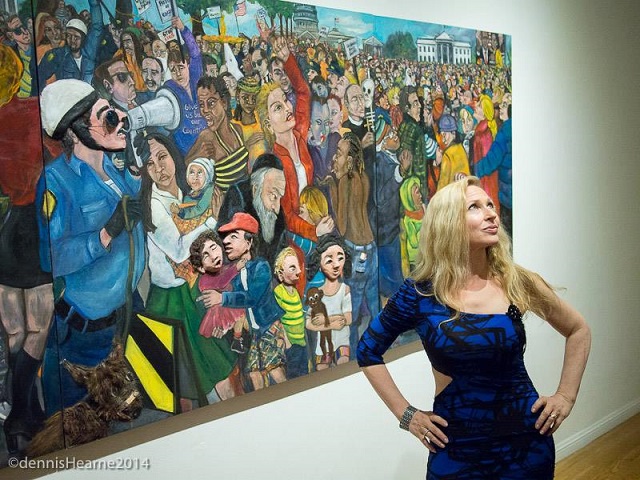 Calef is also a co-author of Nothing But the Truth So Help Me God. She speaks at literary and art forums including Litquake. She is the wife of author Jody Weiner. The Oregon Literary Review describes Calef’s oil and mixed media paintings as presenting "people juxtaposed in ordinary situations while humorously addressing issues facing society." Calef calls her three-dimensional paintings "Peoplescapes." Adding colorful details including sculpture fabrics and found objects, Calef’s Peoplescapes highlight society’s madness. Peoplescapes often depict such universal experiences as a demonstration, cocktail party or airplane ride. In one such painting entitled “No Free Lunch” Calef portrays a flight attendant selling gas masks, water and toilet paper to emphasize nothing is free. A progression of Peoplescapes is Calef’s “plane slashing” technique in which she tears, cuts and manipulates the plane of an existing painting while integrating it with one or more finished canvases, and then adds sculpture and found objects. In 1999 and 2000, Calef served as an artist in residence at the State of the World Forum where she painted and drew religious and political world leaders including Mikhail Gorbachev and Queen Noor of Jordan. Her painting "Modern Deluge" was shown in a 2004 national juried exhibition entitled "Perceptions of the President" at Koo’s Gallery in Long Beach, California.

How do you describe Nancy Calef's artwork and songbook? What characterizes your artistic philosophy?

Music has always been essential to my process. Seventeen years ago, my mother's passing unleashed a flurry of original music that continues today. My compositions, written with piano and voice, allow me to move through deep emotions and utilize my vocal range. I've been developing the songs in my home studio and occasionally performing them at local venues, along with blues and jazz standards, which I've always been singing. The philosophy behind my art and music is to honestly and soulfully convey my experience, in styles honed throughout the years.  It's best described by the excerpt below:

Proof that I've been."

"Way to the Deep" music & lyrics by Nancy Calef

What were the reasons that you started the cultural, political and spiritual issues facing society?

I began as a plein-air painter, still a great meditation, and my work has evolved into multi-media paintings focusing on challenging worldwide subjects. I felt the need to depict the human condition, and developed my style of bringing humor and irony to complicated concepts. While painting crowds of people, I am able to highlight topics such as global warming, the toxins in our food, our dysfunctional healthcare industry, corrupt financial systems, the pharmaceutical war on natural remedies, and the double-edged sword of the entertainment industry. (Nancy at the Beat Museum, San Francisco / Photo by Eduardo Bonsi) 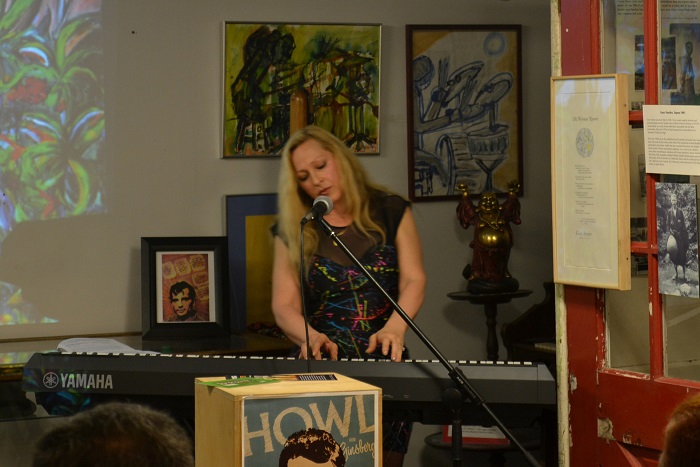 "Painting and music have proven themselves to be powerful universal languages that reach beyond all prejudices to touch our similar human emotions, stimulate our intellect, and open our hearts."

What has been the relationship between music and literature in your life and in your art? How does music affect your inspiration?

I often turn to the piano to free up my mind and access my intuition, when sitting at my easel becomes too painful. Self-generation is difficult decade after decade, even in the face of relentless self-expression. Keeping my energy fluid and avoiding slipping down the emotional rabbit holes of my subject matter, I move from my art studio to the keyboard. These outlets complement one another, except when I'm neglecting one project over another, similar to having a favorite child. My process includes yoga and dance, and other physically centering activities for mind, body, and soul integration.

The original music comes from a cavernous realm that cannot be accessed through imagery, only words and melody. Writing  Peoplescapes-My Story From Purging To Painting (illustrated memoir containing 149 color images, Babu Books; 2015), an around-the-world tale of healing and transcending childhood trauma through art, was a cathartic experience. I was a child model in New York with a bi-polar stage mother, and I struggled with a food disorder for years until finding the path to painting. In retrospect, the difficulties I've faced led me to greater self-inspection, and the development of a creative arsenal in preparation for the unpredictability of life.

I regularly listen to blues and jazz standards, and rock and roll. Today's music is often created digitally, and lacks the warmth, melody, gripping lyrics and uniqueness of live orchestrated recordings. My hope is that more artists bravely reach in and don't get distracted by the ease of digital self-production. Since everyone can create music, we have to muddle through lots of noise to find quality, innovative, original music, not replaced by DJs.                           (World Music / Artwork by Nancy Calef) 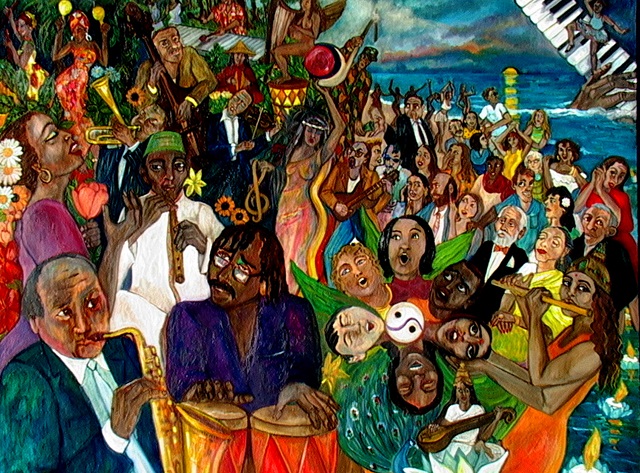 "The greatest revolution would be for people to stand up and demand racial, gender, financial and spiritual equality and acceptance. If, one by one, we all take responsibility for the balance of power and make ethical adjustments as issues arise, we can transform our society."

I was privileged  to exhibit in a gallery with master figurative painter Jack Levine (deceased), an idol of mine, and North Beach's own Lawrence Ferlinghetti. For decades, I've been friends with Poet Laureate Jack Hirschman, who radiates joyful fearlessness and passion. The best advice I've received is to stay loyal to my own vision and not to be concerned with public opinion, which has enabled me to push my boundaries, develop my own style and run with it.

How has the Beats and Counterculture of 50s-60s influenced your views of the world and the journeys you’ve taken?

The Beats and Counterculture promoted unbound self-expression, freedom to discover and live as your true self, break down barriers, while wholeheartedly committing to the creative lifestyle. Although I do not consider myself a poet, the Beat generation has influenced my songwriting, teaching me to tell a story through emotion, rhythm and lyrics.

What are the lines that connect: Beats and Music? What touched (emotionally) you from the North Beach district?

The Beats and music are connected through poetry, purity, ingenuity, experimentation, all with a childlike sense of abandon and absorption in whatever milieu they find themselves. I've been living in North Beach for nearly 30 years, and besides its Mediterranean beauty, I love the creative community environment, and the continuous celebration of life and love through music and the arts.

You have traveled all around the world (Europe, U.S., Central America, Asia, etc), what are your conclusions?

Traveling the world reveals the universality of the human condition, and all cultures are worthy of great respect. I have also learned to be at home in the world, and relate to people wherever I might travel. Painting and music have proven themselves to be powerful universal languages that reach beyond all prejudices to touch our similar human emotions, stimulate our intellect, and open our hearts. 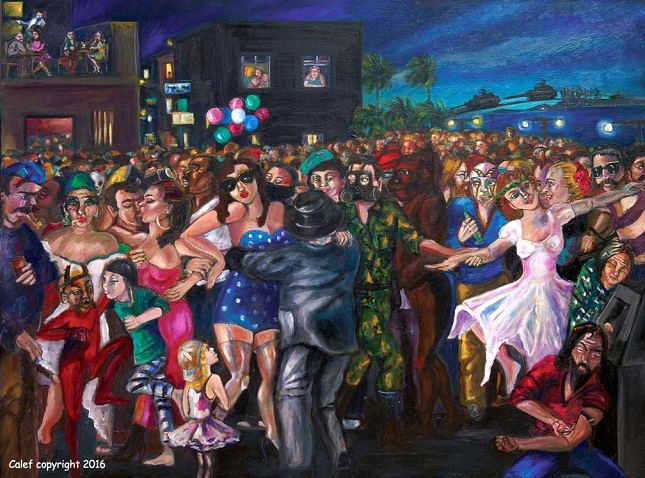 "I regularly listen to blues and jazz standards, and rock and roll. Today's music is often created digitally, and lacks the warmth, melody, gripping lyrics and uniqueness of live orchestrated recordings."  (CNN / Artwork by Nancy Calef)

What is the impact of North Beach Beats era district to the racial, political and socio-cultural implications?

The Beat era transcended racial, political and social limitations, and the Beats refused to be denied the right to be heard, and treated all people as equal. True wealth was judged by richness of inventiveness, not of material accumulation. It has provided a philosophy whereby we may refer when hoping for unity, justice and equality.

The greatest revolution would be for people to stand up and demand racial, gender, financial and spiritual equality and acceptance. If, one by one, we all take responsibility for the balance of power and make ethical adjustments as issues arise, we can transform our society. There is always a push and pull toward evolution, as some people hold on to what is familiar, and others have the urge to progress. It often takes time for love and growth to overpower the dark forces of fear, stagnation and discrimination.

I would have enjoyed the Golden Age of the 20s, when people were not tormented by war, as they were between two wars, jazz was born, women could vote, and Hollywood was thriving.  I'd take along Jansen's Art History books,-The I-Ching, Prescription for Natural Healing, and music by Ella Fitzgerald, Sarah Vaughn, Billie Holiday, Dave Matthews, Doors, Santana, Van Morrison, Tori Amos, and the Putumayo world mixes. 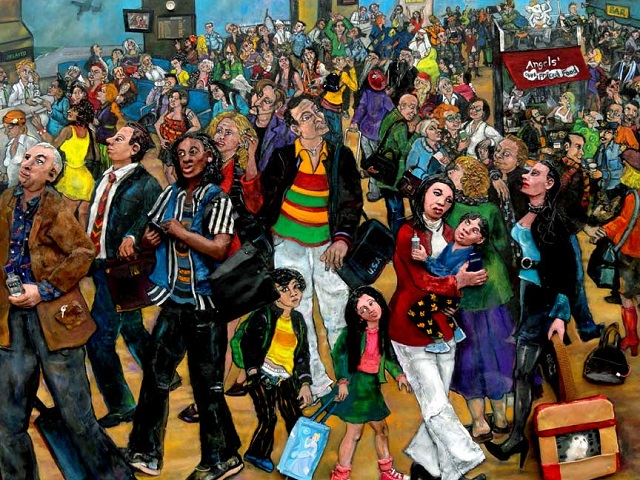 (Elephant in the Room/ Artwork by Nancy Calef)