Q & A with David Barsamian, one of America's most wide-ranging and respected independent journalists

David Barsamian is an Armenian-American radio producer, journalist, author and lecturer. He is the award-winning founder and director of Alternative Radio, the independent weekly audio series based in Boulder, Colorado. One of America's most wide-ranging and respected independent journalists, David Barsamian has altered the media landscape with his radio programs and books with Noam Chomsky, Tariq Ali, Howard Zinn, Arundhati Roy, Gore Vidal, Allen Ginsbeg, Amiri Baraka, Nanao Sakaki  and others, including Propaganda and the Public Mind: Conversations with Noam Chomsky; Eqbal Ahmad: Confronting Empire; and The Decline and Fall of Public Broadcasting; The Checkbook and the Cruise Missile: Conversations with Arundhati Roy; and Louder Than Bombs: Interviews from The Progressive Magazine.

His most recent books are "Occupy the Economy: Challenging Capitalism" with Richard Wolff and a reissue of Chomsky classics, "How the World Works." His best-selling books with Chomsky have been translated into many languages.

He is winner of the Media Education Award, the ACLU's Upton Sinclair Award for independent journalism in 2003, and the Cultural Freedom Fellowship from the Lannan Foundation. The Institute for Alternative Journalism named him one of its Top Ten Media Heroes. David's  latest book "Power Systems", is a compelling new set of interviews on our changing and turbulent times with Noam Chomsky, one of the world's foremost thinkers.

Where did you get that Alternative Radio’s idea?

I got the idea when I moved to Boulder, Colorado and volunteered at KGNU, a community non-profit radio station, I began with a world music program called "Ganges to the Nile." Then after a year or so I began another program called "Hemispheres." More and more people were asking me for cassette copies of the shows they heard. These requests kept on increasing. Then I thought if there is such local interest why not distribute nationally and internationally. And in 1986 Alternative Radio was launched.

Since 60s and 70s – what has changed towards the best – for our civilization and culture and what has gone wrong?

What has gone wrong? Imperialism and Capitalism continue to destroy people and the planet. Today there is much more awareness and respect for gender issues, gays and lesbians and transgender people as well as indigenous peoples.

What was the relation between art and activism? What about humanism in arts?

Politics without an artistic flavor and color tends to be boring. I was lucky enough to study sitar and raga music in India with a great master. That training helps me to do the work I am doing today. I try to make everything fragrant and attractive. "Politics without an artistic flavor and color tends to be boring"

There was a brief opening--aperture-but it was quickly slammed shut. Che was killed. The colonels took over in Greece. The coup in Chile. The dictatorships in Argentina, Uruguay and elsewhere. The destruction of Indochina and the deaths of millions of Vietnamese, Cambodians and Laotians by the U.S. military in what was probably the biggest war crime since the end of WWII

Change is possible. There is a saying: It is always darkest before the dawn.

Change will come from hard work and organizing not from magical thinking.

What is your assessment of the economic crisis facing Greece?

What the so called international community led by Germany has done to Hellas borders on the criminal. The people who are being asked to pay, and the austerity measures that are imposed on them, are not responsible for the debt. The rich and powerful in the country should be made to pay, not ordinary citizens and workers. Much of the money loaned to Greece just circles back into the hands of the donors. Many of the suicides, divorces, domestic violence, dashed hopes and ruined careers in Greece can be traced to what the EU and the banks have done. This is how capitalism operates. Profits uber alles!

The years I spent in India in the 1960s, absorbing the richness of that culture. I was surrounded by some of the greatest musicians and poets. I learned so much including Urdu, Hindi and Bengali.

What are some of the most memorable interviews you've had? 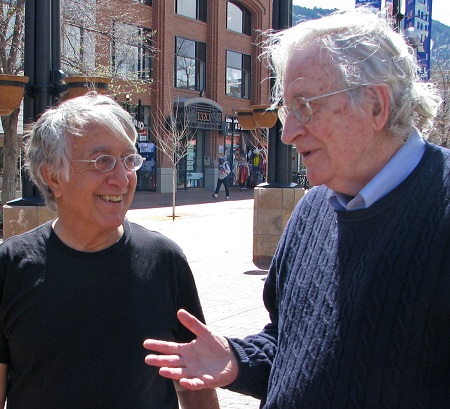 There have been so many but two stand out. Talking to my Mother about her experience during the Turkish genocide of the Armenians. Emotionally speaking those were the most difficult interviews I have ever done and dare say will ever do. The other was my first interview with Noam Chomsky. I had technical problems at first but was able to solve them. I knew from the first that I would be connected to Chomsky for the rest of my life. He has guided me intellectually in many ways. And I learned from him patience and humility. But I must confess I don't always succeed.

Would you mind telling me your most vivid memory from Nanao Sakaki and Allen Ginsberg on KNGU radio?

I knew Allen from his days in Boulder and Naropa Institute. He was always very kind to me. Allen blended politics, culture and spirituality. Met Sakaki once or twice. Nice guy but no distinct memory.

Are there any memories from Gore Vidal and Amiri Baraka which you’d like to share with us?

Both were not easy to interview for different reasons. Vidal was a fount of cultural wisdom and political information and he was a savant of U.S. history. He was a gifted writer whose command of English was stunning. Baraka was a Beat poet and steeped in African American culture.

What is the strangest desire that someone have requested to give you the interview?

Which of the interviewees were the most difficult and which was the most gifted?

Add Edward Said to difficult to interview in addition to the two above.

Easiest and most gifted was Howard Zinn. 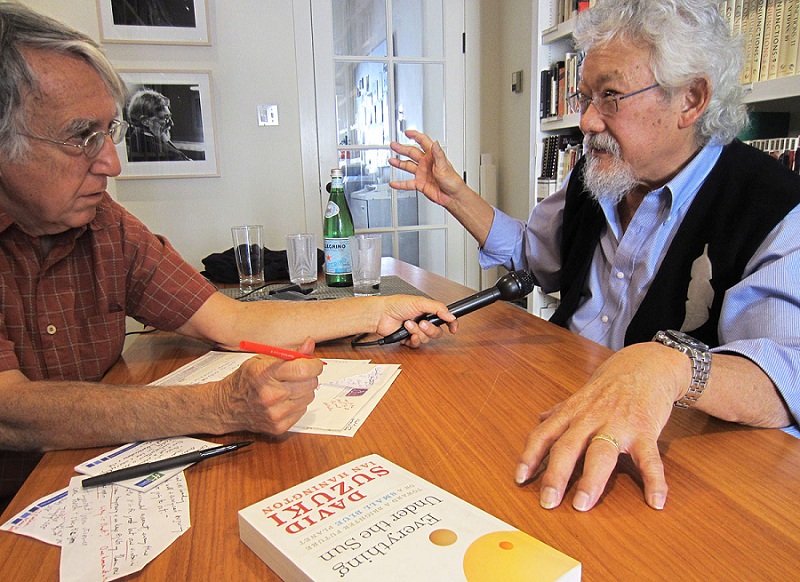 Barsamian with David Suzuki is from an interview they just did together, called The Nature of Things. (Photo in Santa Fe by Robin Collier.)

What are the secrets for a good interview?

Be prepared. Organize and prioritize your questions. Be alert and ready to improvise.

The worst has already happened and the best is yet to come!

In anger, calling my Mother a donkey once. Regret that always. She was so gentle and had lived through hell.

What is the sound of “Audio Energy for Democracy”?

“Audio Energy for Democracy”? - Listen to an AR program. We podcast for free.

If the Democracy was a song, what would be?

What advice would you give to new generation and what is the best advice ever gave you?

What is your DREAM  about the future of world?

A planet at peace and people in harmony.

...and what is your NIGHTMARE?

The spiral we are in heading for the climate abyss.

What would you ask Cleisthenes?

To Cleisthenes? Who are you? What is the meaning of life?

What would you say to Frank Zappa?

How you would spend a day with William Saroyan?