Q&A with Greek band ALTRIBE (Albert Panagiotopoulos & Fiona Lambrides) Blues Rock and beyond with no taboos.

"The same feeling and the same need of people, worldwide, for freedom of expression. Love, passion and the intensity in which they are expressed, are taboo feelings and in Blues - Rock music, there are no taboos."

ALTRIBE: Out Of The Blues

ALTRIBE band is a four- member OUT OF THE BLUES group based in Athens Greece, created by drummer – composer Albert Panagiotopoulos. Except Albert, there is Fiona Lambrides on vocals & acoustic guitar, Apostolos Karatzas on guitar and Jimmy Billias on bass. All group members are fully experienced and have cooperated with many groups and well-known artists. After a three month Europe Tour, based in Berlin, they are back in Athens. They have performed in many bars, clubs and festivals all around Greece, playing their original songs and selected covers. (Photo by M. Papaioannou) "It’s the song of a lonely man singing in a crowded city. To help people by helping ourselves."

They have official permission by Rolling Stones’ publishing company, to record and perform the song “Gimme shelter”. Also, they have been honoured by A&R American companies (uPlaya platinum award, Taxi distinction) and they have reached a No.1 (locally & nationally) on ReverbNation Rock groups top10 for Athens, Greece (October 2013). In 2014 released the album "Aphrodisiac" with a different member composition and Greek lyrics, the band has a digital single with Warner music as well as a CD with FM records.

Albert: To be simple, accurate, solid and self-confident. Blues is the root of Rock and Jazz music.

Fiona: Because I started from classical music, when I switched to the blues, I felt free. Freedom for me is a primary and basic value.

How do you describe Altribe sound and songbook? What characterize band’s philosophy?

Albert: It’s the song of a lonely man singing in a crowded city. To help people by helping ourselves.

What were the reasons that you -a Greek musician- start the Blues/Rock researches and experiments?

Albert: I’m a citizen of the world and I think that this music is the most interesting and sensitive.

Fiona: I think it was the call that drove me… an internal call, which starts in my childhood. I liked the blues and then came the right time when our roads met. It was fatal. Karmic. My life changed. 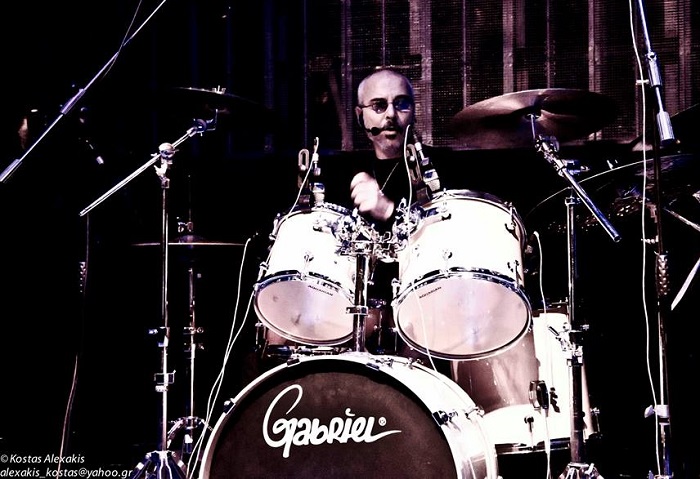 Albert: I miss a rainbow of passions, senses, feelings. I have no hope and no fear. I just act.

Fiona: What I miss most, is the ease of people to accept new kinds of music and new sounds. I do not expect things anymore. I consider expectation is a curse and an obstacle. As for fear... I fight it every day, by singing.

Albert: I don’t want to change anything (even though many things may be disgusting). Things happen in their own way. About myself, I just want to be creative and energetic.

Make an account of the case of blues rock in Greece. Which is the most interesting period in local scene?

Albert: Things happen in Greece, now and then, in the same way that happen abroad. But in a lower level…

Fiona: There were -and have been- individual cases of artists, who left their mark on Greek music scene and have paved the way for the younger ones. Pavlos Sidiropoulos, Trypes… Exceptional cases.

What are the lines that connect the legacy of Rock n’ Blues from United States and UK to Greece?

Albert: There is one line – and it’s too long!

Fiona: The same feeling and the same need of people, worldwide, for freedom of expression. Love, passion and the intensity in which they are expressed, are taboo feelings and in Blues - Rock music, there are no taboos.

Albert: Something that passed through my mind. Unfortunately I can’t tell you. Beggar’s Blues Diary and Villagers of Ioannina City are nice bands.

Fiona: The local circuits themselves make me laugh. Lately I have heard something that shocked me emotionally and I really liked it: The “World Dog” project. I also like the Villagers of Ioannina City. Fiona: Fearlessness in love. Strong footsteps. To be… and not to have.

Fiona: The power of Rock - Blues music has proven really great. From its duration in time, but also from the fact that is has united cultures, social groups, people who seemingly are separated by many things… Unexpected collaborations, music blending and fusion. It is in the nature of music to unite and not to separate. Sometimes, without setting limits… but this is necessary sometimes, for the artists themselves, when they have a statement to make through their work.

Albert: The day that Led Zeppelin played in Madison Square Garden. The “why” is obvious.