Boris Hrepić Hrepa is known to Croatian audiences as a member of the well-known Split band Daleka Obala, which he founded with Marijan Ban. Less known is the fact that Hrepa started his musical journey as a blues musician. Given that blues was always part of him, the band Sunnysiders, with singer and guitarist Antonija Vrgoč, represents a return to his musical roots. Sunnysiders expanded with the arrival of new members, Goran Gubić Hans and Igor Paradiš. Their set features original tracks, famous blues covers, but also songs outside the blues genre transformed to fit in with their rhythmic and melodic sound structure, which is distinctive for its two-part singing and the playfulness of the arrangement. 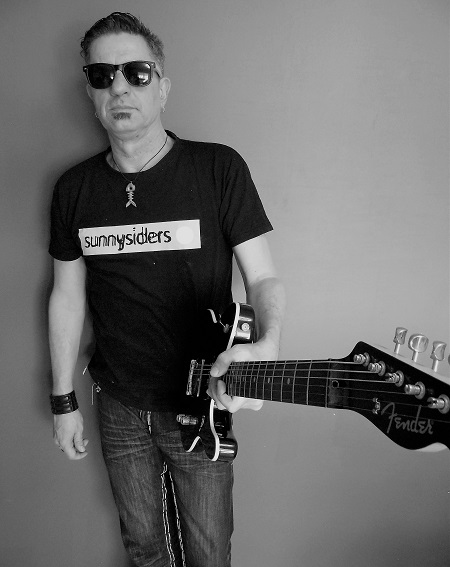 Boris Hrepić Hrepa started his music career back in 1981, when he was a member of the L.B. Blues Band. He was a founder and a member one of the most popular bands in Croatia Daleka Obala (’85-’01.). He was an accompanist to numerous Croatian musicans, and at this point he released 13 records (Daleka Obala, The Obala, Fon Biskich & Narodno Blago, Steve Wolfman Band). He plays bass, guitar, harp and ukulele, and also sings. Two years ago he went back to his roots by playing blues again. His latest music project Sunnysiders (with Ro La on guitar and vocal) won at 2010. Croatian Blues Challenge in solo-duo category, and they were at semi-finals at 2011. International Blues Challenge in Memphis. Sunnysiders released their new album “Click Play” (2017). Hrepa, finished University of philosophy in Split, as an art teacher. He is also active in art painting. He is an author and a host of children tv show „Dica Sritnih Lica“, president of a society for promoting children’s creativity „Dica Sritnih Lica“, and also author and an actor in several puppet-acting-video shows for kids.

How has the Blues, Philosophy and Visual Art influenced your views of the world and the journeys you’ve taken?

Since I was a young teenager around 17, my whole feelings, thoughts and senses have been focused on art and art philosophy. Music, especially blues, or visual art like painting, drawing or sculpturing, and reading and writing songs, stories and poetry, or watching movies and things like these was everything for me. All physical activities and needs like eating, drinking, taking care about body, sexual activities, sport were no irrelevant, for me it was nothing but animal instincts. That state of mind didn’t last too long but it concreted my essential importance for my future life.

How do you describe Boris Hrepić Hrepa and Sunnysiders sound and songbook? What does the blues mean to you?

Our sound and songbook style was built in only two months, in September and October of 2010, when Antonija Vrgoč Ro La, then my girlfriend and now my wife, and me made decision to join the 2nd Croatian Blues Challenge in solo-duo category. I just came back on blues tracks again, after 20 years playing in one of most popular Croatian pop rock band Daleka Obala. So, I started to write blues songs for the duet. That style of blues, with rhythmic and melodic sound structure, which is distinctive for our two-part singing and the playfulness of the arrangement, become our unique version of blues. Now we have a 5-piece band, but core of our sound is still the same. Going back to blues was for me a sort of being reborn, that changed whole my life, not just music-wise, but in every way, so blues is very, very important to me.

The day when I first time heard Ro La singing was very important experience. That was a moment when I fell deeply in love with her, and moment when I knew that I found my blues companion. That was a moment when my life was changed completely. One of the best advice I got was when Ro La and me, after we won the Croatian Blues Challenge, came to Memphis for the 26th International Blues Challenge. We were walking along the Beale Street and we visited Tater Red’s Lucky Mojos Gift Shop, and Red, owner of the shop and also judge at the Challenge, asked us how we would start our show that night at Pig On Beale Blues Club. We said that we will start with a slow C minor blues, just as a warm-up. He said that it is better to start with the best fast song we have, because we will never have a second chance for the first impression. That night we changed that first song with the other one, and we passed to semi-finals. 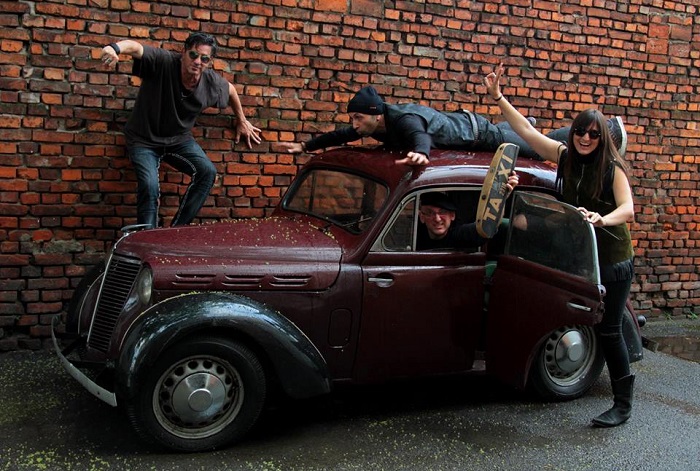 "Our sound and songbook style was built in only two months, in September and October of 2010, when Antonija Vrgoč Ro La, then my girlfriend and now my wife, and me made decision to join the 2nd Croatian Blues Challenge in solo-duo category." (Photo by Željka Hubak: Boris, Ro La & Sunnysiders)

During the 29th International Blues Challenge I was, as a leader of the Croatian crew, in Sam Phillips Recording Studio with Croatian Youth band 4Town Blues Band to record couple of songs. At the end of the recording session I had one hour left so I decided to record one of my songs, Commitment To Blues, which was dedicated to the late Father of Croatian blues boom Dražen Buhin Buha. A sound engineer in studio, a very old and fat man, told me that he likes my song and that he will like to record it with an electric guitar on it. He had been making a lot of small jokes about us, Croatian blues musicians, during that day so I thought that was just another joke and I didn’t pay attention. When I came back to the hotel I googled a bit about him. His name was Roland Janes, and during 50s he was a Sun Studio guitar session player and a pioneer of the rockabilly guitar, a member of Jerry Lee Lewis Band, and he recorded a guitar on, for example, Whole Lotta Shakin’ Goin’ On. Next morning, I came back to studio to pick up CD with finished songs. The studio was opened, and I walked into it and I found Roland with his eyes closed listening to my song. I was devastated, because I missed opportunity to have a legend on my song, and honored at the same time. Few months later he died of a heart attack.

I miss the never recorded albums of my late blues legends. For example, I miss a whole that music Duane Allman never had a chance to record because his died at 27. I hope that my health will let me record, play and promote blues as long as I am able. I am optimist so I don’t have many fears, but as a father of three children all my fears are about them.

Last ten years we have the blues boom in Croatia. Dražen Buhin Buha was a great blues innovator and promotor pioneer. He started so many things with the blues in Croatia, like Croatian Blues Challenge, but he died in 2012 and his last wish was that we must keep on fighting to keep the Croatian blues story alive.  I am doing my best to fulfil his wish. 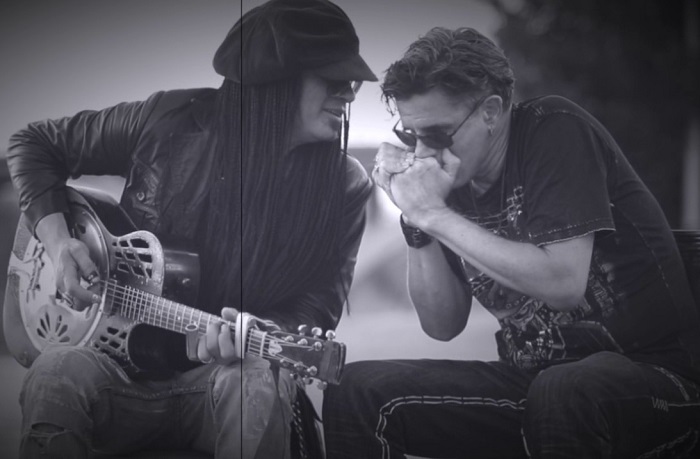 "I am working with kids whole my life, or through my TV show for kids, or as an art teacher, or as a father of three kids, and also through Blues At School that I am doing from Memphis to Croatia. Kids are pure essence of human being, so open, so natural and direct. Someone said that if you look into kids eyes you can see God. I am always learning from kids." (Photo: Boris Hrepić Hrepa & Eric Sardinas)

Are there any similarities between the blues and the genres of (Croatian) folk music and traditional forms?

There is some similarities between the blues and some of Croatian folk music, but from this ex-Yugoslavia region the closest music to blues is sevdah, a traditional folk music from Bosnia.

What touched (emotionally) you from the kids? What are the lines that connect children’s creativity & art/music?

I am working with kids whole my life, or through my TV show for kids, or as an art teacher, or as a father of three kids, and also through Blues At School that I am doing from Memphis to Croatia. Kids are pure essence of human being, so open, so natural and direct. Someone said that if you look into kids eyes you can see God. I am always learning from kids.

Which day to choose… there are so many great days in the history of music. But, I will think instinctively, and the first day on my mind is 22th November 1981, Buddy Guy Blues Club, Chicago, when Rolling Stones came to club and jammed with Muddy Waters and his Band. That was amazing blues night. I see myself leaning on the bar, having a beer and enjoying.