"Language knows more than you do, how can you and language inform each other. Imagination can be contagious. This isn’t about you. Ask not what you can do with language but what can language do with you."

Dan Raphael has been active a couple decades in Portland, Oregon as poet, performer, publisher and reading host. Some of his most recent books are The State I'm In (nine muses books) and Impulse & Warp: The Selected 20th Century Poems (Wordcraft of Oregon.) Current work appears in Otoliths, Caliban, Big Bridge, Cascadia Review and They Might be Giants.                                          Photo by Robert R Sanders ©2015 Since moving to Portland in 1977, Dan Raphael has been active in the poetry community as poet, performer, editor, and reading arranger. Impulse & Warp: The Selected 20th Century Poems (Wordcraft of Oregon, 2010) includes work from his first 13 collections. Books of new poems include The State I'm In (nine muses, 2012), Breath Test (nine muses, 2007), and Showing Light a Good Time (Jazz Police, 2001). Children of the Blue Supermarket, a CD of performances with jazz saxophonist Rich Halley and drummer Carson Halley, was realeased in February 2011. Dan has given over 250 performances, in places like Wordstock, Bumbershoot, Powell's Books, Eastern Oregon University, Portland Jazz Festival, and 60 other Portland venues. After editing NRG magazine for 17 years, he published 26 Books—26 chapbooks of 26 pages from 26 Oregon and Washington poets. He organized a reading series at downtown Borders for 13 years, the market day reading series in St Johns for 3, and once staged Poetland—80 poets in 8 places reading over an 8 hour span. He was the editor of NRG Magazine, a literary tabloid, for fifteen years.

What experiences have triggered your ideas most frequently? How does music affect your mood and inspiration?

“Trigger” is an interesting word here, as it’s more like an experience gets me in a state where I can be triggered. I know things are building inside me—ideas, impressions, word-play, etc.—but there’s usually so much distracting me, the details and concerns of everyday life—the words don’t/can’t come out.

Music in performance—like readings, movies and other performances—takes me away from the fuzz of everyday life and gets me involved empathically, with energetic curiosity, and other affects. Sometimes I’ll write a poem after witnessing a performance, sometimes I even start writing while the performance is still on. The movie or whatever I’m writing after has little influence on what gets written, though some hints carry through.

What were the reasons that you started the spoken words researches? What touched (emotionally) you from the Jazz?

I grew up in a poor neighborhood in central Pittsburgh, neither of my parents finished high school, so I thought it was magical, special (being a teenage with a strong inferiority complex, this was important and needed) when I started writing poetry around age 16. A little after this I started going to a coffeehouse downtown (late ‘60s) where folks read and recited Ginsberg, Ferlinghetti, Yevtushenko and others. Soon I was going up to the mike to read from Coney Island of the mind or howl or something. [Around age 12 I started stuttering badly. Later I realized if I was reading something, or reciting from memory, I didn’t stutter—so it was easier to perform than say my own words]

From a young age I was listening to music, from a mix of pop and Motown, then the psychedelic era (my first live concert was Jefferson Airplane after Surrealistic Pillow had come out.) I loved so much about the Temptations and Four Tops—the emotion, the driving rhythms, the brilliant construction and production of the music. But nothing’s like live music, which for me has been mostly jazz. I say of my friend and world-class saxophonist Rich Halley that he plays with so much emotion I want to take my shirt off and have it wash over me. 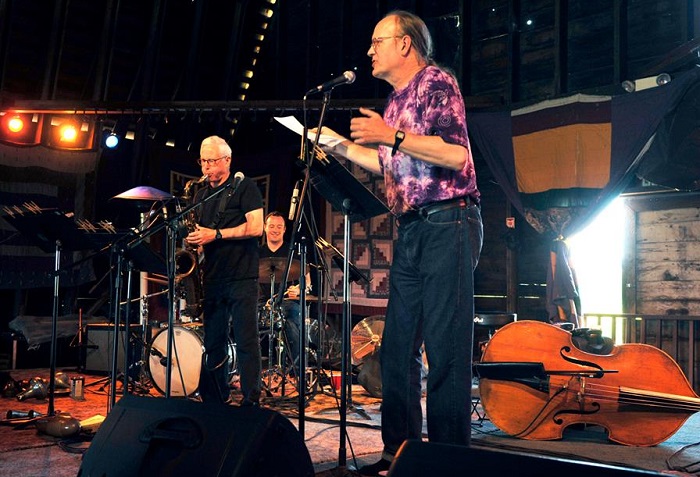 "My hopes for the future is that miraculously we survive. But which we. There are way too many people on this planet. Best scenario is enough technology is created for some people and some ecosystems to survive." (Dan Raphael & Rich Halley / Photo by Robert Pyle)

What do you learn about yourself from the Jazz? What are the ties that connect the legacy of Jazz & Poetry?

I try to understand everything, and all arts that are trying to do that, or are responses to the unknowability, complexity and wonder of our worlds, are connected. Jazz has shown me the power of improvisation, cooperation, being more than the sum of the parts. I hope that can be an effect of my poetry, where 2 plus 2 is 5 or more. Jazz has also given me confidence in my abilities as writer and performer, that I am as world-class and visionary at that as musicians like David Douglas and Glen Moore are in their music.

Which acquaintances have been the most important experiences and which meeting touched (emotionally) you?

There’ve been quite a few  One would be Laura Winter, and not just for her friendship, the energy of her performance and poetry, and her amazing husband Brad, Through her I got connected to the Creative Music Guild, a local organization that’s been bringing world class avant-jazz performers to Portland for decades. Key connection here is saxophonist Rich Halley, who I’ve performed with many times, made a CD with, and who invited me 3 times to a small music festival he curates, where I got to listen to and hang out with more fine jazz folks like Andrew Ware and Hamid Drake.

My now dead friend David Whited, who’s why I moved to Oregon where I’ve lived almost 40 years—and how different would my life be if i hadn’t moved here! A committed poet with a broad pragmatic knowledge, who also introduced me to a lot of different music like Jerry Jeff Walker and The Fugs. The mud of life.

Lots of short stories and comic books built around that kind of question. Everything has its consequences that you cant predict. Especially difficult in these current times when we may be on the edge of mass extinction, global system collapse. So best I can come up, in these desperate times, that some impossibly generous aliens come along and solve our problems for us, including our ignorance about how we cause these problems. Or maybe some cosmic miracle could turn everyone into a compassionate Buddha.

What is the impact of music on literature? What is the relationship Music & Literature to socio-cultural implications?                 Photo by Abby Klips Corbet 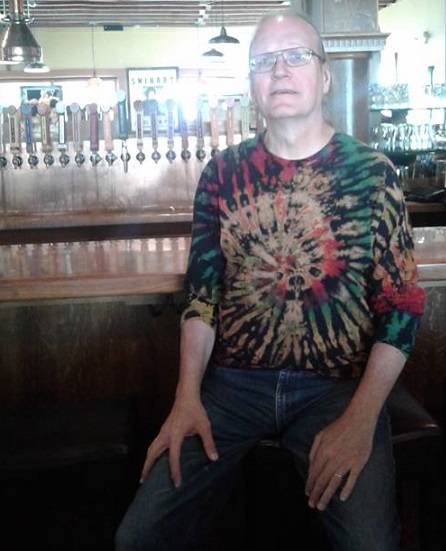 I suppose more literature has been inspired by music than vice versa, but it could be close, with operas and such, Art responds to its times, include the relationship of the art’s forms and contents to the times its happening. Likewise socio-cultural changes, often embodied by their artistic expressions, are also affected by economy, technology, politics and such.

I get an occasional chuckle when I read lines of my own talking about certain political or ecological issues and realize the poems 20 years old or more. Maybe some politician, inventor, rich person could be inspired by music or literature to make important improvements to our world. Otherwise artists are often prophets, seeing whats coming but getting little attention. So many people have read 1984 and that hasn’t stopped Orwell’s world from coming to fruition. Read a sci fi novel in the early 70’s about toxic chemicals and genetic mutation making our world impossible to live in. At least art helps those who experience it get some pleasure, vision, hope out of what seems a hopeless run to global extinction.

What is the biggest revolution which can be realized today? What are your hopes and fears for the future?

There’s too much centralized wealth and technology for any significant revolution at this moment. Best we could hope for is that large industrial nations, especially the US, which is lagging compared too many of its compadres, to work on renewable energy technology with the same fervor we devoted to building weapons in WWII (this comparison stolen from a great Bill McKibben article today.)

My hopes for the future is that miraculously we survive. But which we. There are way too many people on this planet. Best scenario is enough technology is created for some people and some ecosystems to survive. My feat is this won’t happen, we’ll get more feudal and violent, societal protections will keep breaking down, oceans will rise flooding many major cities, famine, plagues, and so forth.

Was doing a poetry reading at Bowling Green State, when I was in the MFA program. 3o or so people, and I became aware how quiet everyone was. It worried me so between poems I asked “Is anything wrong.” Ron Kimberling, another MFA student, shook his head as if waking up and said, “No, keep going.” That’s been the best advice: when I get worried doing readings I just focus on the words in front of me. After all, that’s core of what I’m doing, the words. If the words can’t cut it, can’t communicate and engage, I shouldn’t be on stage. Likewise when works I sent out get rejected, I get back to the page, make sure the work’s still the best it can be, and send it somewhere else. I give this advice in the workshop I’ve taught a few times on how to perform your own work. 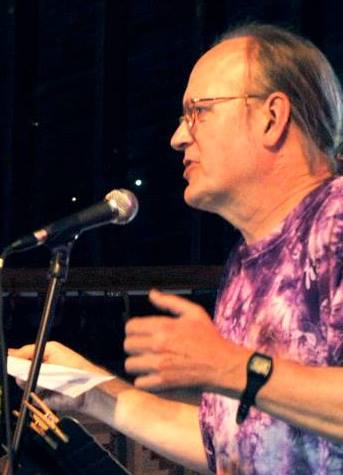 What advice would you give to the writers of tomorrow?

Imagination. Possibilities. Not for what you write to recreate an experience but that each person will have their own experience with the work. Language knows more than you do, how can you and language inform each other. Imagination can be contagious. This isn’t about you. Ask not what you can do with language but what can language do with you.

"Jazz has shown me the power of improvisation, cooperation, being more than the sum of the parts. I hope that can be an effect of my poetry, where 2 plus 2 is 5 or more."

So many great possibilities, things I’d want to witness, people to meet. Like going back to New York around 1850 and hang with Walt Whitman. Take along Ginsberg, Kerouac, Cummings, my own books, several others. Maybe with this time machine I could easily recharge my boom box batteries. Walt would dig Dylan, not sure what he’d make of Bitches Brew. Another choice would be San Francisco when Muir was exploring around Yosemite and travel the pacific crest before the trail, survive in the wilderness.

What would be your first decisions as minister of education and culture? What is your ‘dream’ and ‘nightmare’?

Depends what powers I would have. Free education for those below a certain wealth. Required community service for graduation. More emphasis on curiosity and intellectual skills than memorization and greed. Can’t really speak to the dream or nightmare here, as it’s an overly abstract question to me.

For any of these I’d do some research to find our what other things interest them. I have good knowledge of Ginsberg as person but only know parker and homer from their art.

Spending a day with Ginsberg, whatever he wanted. Breakfast, walking somewhere, talking all the time. Be great to show him a couple of my poems over coffee or whatever he drinks—fanboy. Get high. Tell stories.

For Charlie Parker I’d thank him for his music and ask if I could read him a couple jazz oriented poems of mine, cook him dinner.

For Homer I’d ask about how the stories came to him—the myths, the geography, the actual Trojan War. 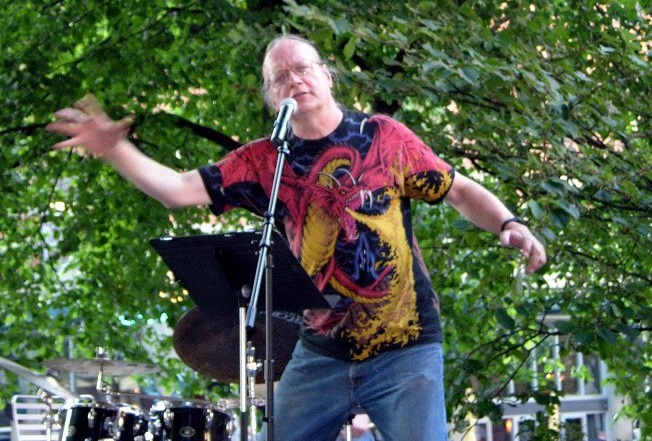