"People who dig the Blues are the salt of the earth. Blues folks don’t live in a bubble, and they don’t look the other way when they see something that ain’t right."

It is not difficult to understand perhaps where Shaun Booker may have been mistaken for an enigma considering her larger than life voice, dramatic stage personae, and chiseled, striking features. Shaun exudes an almost elusive charm. She seems to grab you by the collar with her forceful delivery, all while her eyes pierce you, giggle at you and shy away all at the same time. Taut, firm and graceful arms float around like a butterfly alighting from a flower...but only a really tough flower could hold her. It would have to be fragrant, delicate, and strong all at the same time. Shaun Booker Band's was the Winners of Kings of Beale Street Award 2012, in Memphis TN. Shaun has opened for Koko Taylor and performs throughout the midwest about 250 gigs a year. With family roots in Meridian, Mississippi, it’s no surprise that powerhouse vocalist Shaun Booker’s sound is firmly rooted in gospel and blues music. In her three decades of touring, she’s matured into a versatile singer, who is constantly in demand for her ability to connect with and move her audiences. Booker brings a sultry, fiery and deeply soulful presence evocative of an early Tina Turner. 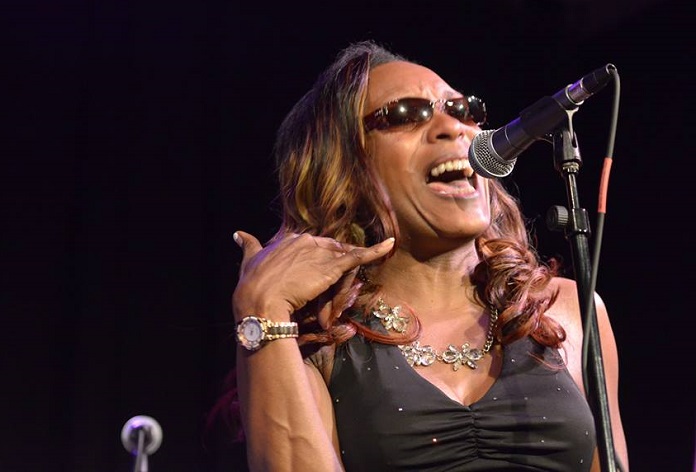 Based in Ohio singer, Shaun is moved instinctively wherever the spirit takes her. “I think it may have gotten me into trouble a couple times because things I say may be taken in the wrong context but my intentions are good and that’s what I really work at, the intent of my lyrics. I don’t really want to be misunderstood but I was called an enigma one time. I looked up the word in the thesaurus and it means puzzling. So I thought about that. If I am puzzling to people, it’s because I have so many different places that I come from. My family is so varied and I love all different sorts of music and I have been thrown into so many situations where I have had to have a sort of buoyancy to make me be prepared for anything. That’s why I guess I’m bold in my statements because I’ve actually done it and what’s to be scared of? I can’t live my life scared.” Shaun Booker's new album "Blue Plate Special" (2015), with guitarist Sean Carney -who headed up singer's backing band- will be on the main playlist of Shaun Booker & Sean Carney European Tour (including: Half Note Jazz Club, Athens, Greece at 23-26 October).

Every time I perform I am reminded of the power of the human will to survive, and the how the spirit can determine the quality of one’s life experience. Blues is Survivor’s music.

How do you describe Shaun Booker sound and songbook? What characterize your music philosophy?

My sound is that of a torch singer with the heart of a good teacher. I like to think my music is defiant, but really thoughtful; I am the preacher that doesn’t beat you with the bible, but instead ministers through wit. 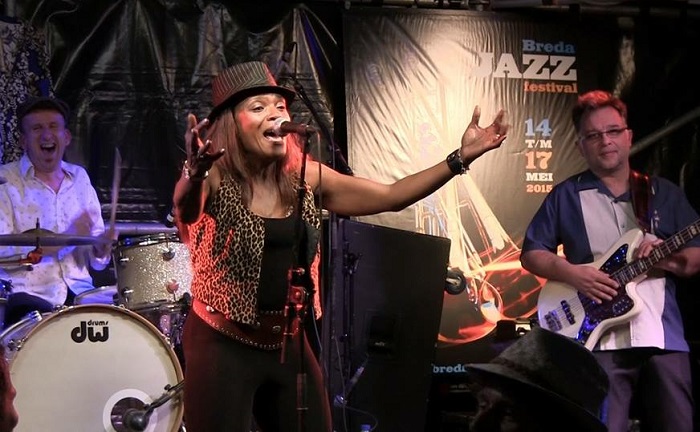 "To me Blues people are very strong and don’t live their lives in terms of monetary wealth but more in terms of the bullets they’ve successfully dodged, and the rainbows that they’ve seen after a storm." (PHOTO: Shaun Booker, Pascal Delamas & Fred Jouglas, Breda Jazz Festival 2015, NL)

When my mother introduced me to her cousin, Dr. Gregory Durr from their birth home of Meridian Mississippi at a family reunion, I began raising my bar. She, doctor Durr was my cousin? A woman PHD? From Mississippi??? I knew I could do anything. I think the times I spent doing Prison tours brought me other invaluable aspects of professionalism in the business. I toured with Don Bexley (Bubba) from Sanford and Son. He was the comic, we had a full revue, tap dancers, and ventriloquists’ yatta yatta. During those times, and from Summer Stock Theater, I learned to change wardrobes in busy dressing rooms without exposing myself. It’s a trick to it. I learned from the seasoned actor. The best advice was given by my Uncle Delmar. It was to smile.

The gig that convinced me that my singing had real healing power was on November 14, 1998. It was the day my mother passed away. I did my scheduled show that night. I was on time, and I was singing because she was tenacious, nearly fearless, except for driving a car. I could her saying “don’t sit here at home looking pitiful and crying. “Go do what you do, so I did. She had encouraged me to not cancel a show a week after my father had passed back 1984. I honor their souls every time I sing. My mother was a teacher both professionally and by example.

I’m very excited about innovations in music. I think and write outside the box, but the essence of Blues music is the foundation, the roots have to be strong in order for the branches to bear leaves, flowers and fruit. The biggest mistake is thinking the Blues is easy. It’s not. The thing I miss the most is that the very community from which this genre came are not proportionately represented in the audience. "My sound is that of a torch singer with the heart of a good teacher. I like to think my music is defiant, but really thoughtful; I am the preacher that doesn’t beat you with the bible, but instead ministers through wit." (PHOTO: Shaun Booker sing the Blues / All Rights Reserved)

I have had so many laughs along the way. Especially on the road, but there are times that the people I come to entertain me as well. Childrens’ choirs make me fall to pieces. I began singing in My Grandfather’s church at the age of three. I think that’s why the kids touch me so. Father daughter dances at the wedding receptions get me as well; I wasn’t afforded that right of passage. Now that my son graduated high school. It’s gonna be the mother son dance.

What does to be a female artist in a “Mam’s World” as James Brown said? What is the status of women in Blues?

I dig being a woman in this quote man’s world. It was rough in the early years of my career. Getting the fellas to take me seriously was something I knew would be my cross to bear. Once I swore off dating anybody in the band it was better for me. The cover band experience it quite different from the singer/songwriter position. When it comes to work ethic though, I am undeniably one of the boys, but I better not break a nail. I prefer working with men. I am the only girl in my immediate family, I am a tom boy, an athlete, and a daddy’s girl. Women have deep blues often. I have assets that are unique to womanhood physically and emotionally. It’s a man’s world, but it would be nothing without a woman or a girl”, to complete the lyric. 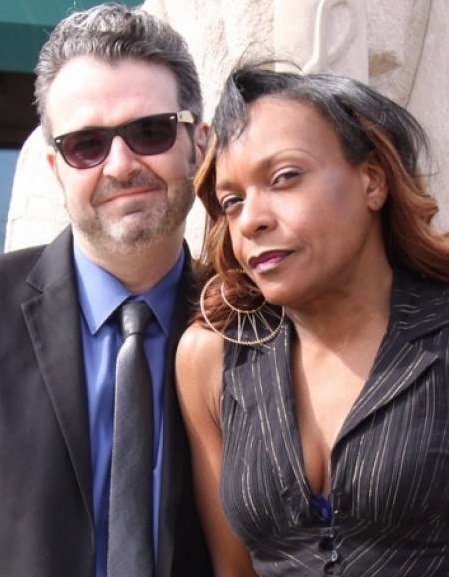 People who dig the Blues are the salt of the earth. Blues folks don’t live in a bubble, and they don’t look the other way when they see something that ain’t right. They may not be rich, but are willing to share what they have with someone less fortunate. To me Blues people are very strong and don’t live their lives in terms of monetary wealth but more in terms of the bullets they’ve successfully dodged, and the rainbows that they’ve seen after a storm.

If I were to get a ride in a time machine, I’d want to be part of The Harlem Renaissance. I would love to STOMP at The Savoy.

Any last comments about your gigs in Athens, Greece?

These were great questions. I can’t wait to see this historic place. Greece where the written language and the Olympics were born. I have dreamed of going for long time, now I’m just days away.