"Music and visual art definitely reflect what is happening with the times."

Carol Boss is a St. Louis based artist who paints mostly in acrylic. Paintings vary from musician portraits, to still lifes, to landscapes including some mural work. Born and raised in a small town in south-central Missouri, has been a St. Louis resident since 1995. Before fulfilling her dream of becoming a full time visual artist in the fall of 2016, Carol was a successful digital illustrator and photography retoucher, as well as manager of Big George Brock. The decision to become a full time visual artist was made after upon meeting Sharon McConell-Dickerson along with a series of events that made her feel like she was being led to paint. Most of Carol’s time is spent with her family, making art and seeing music. She is known for several larger painting projects such as the musician wall mural at HWY 61 Roadhouse and Kitchen in Webster Groves as well as Big George Brock's Blues Bus. Carol has always had a profound passion for painting and music, and she often combines the two. Influenced by Toulouse-Lautrec and Van Gogh’s vibrant use of color and harsh brush strokes, Carol's paintings style is typically realistic in shape with bright accents of color color. Her paintings often tell a story. Her most recent works focus on hope and the blues. 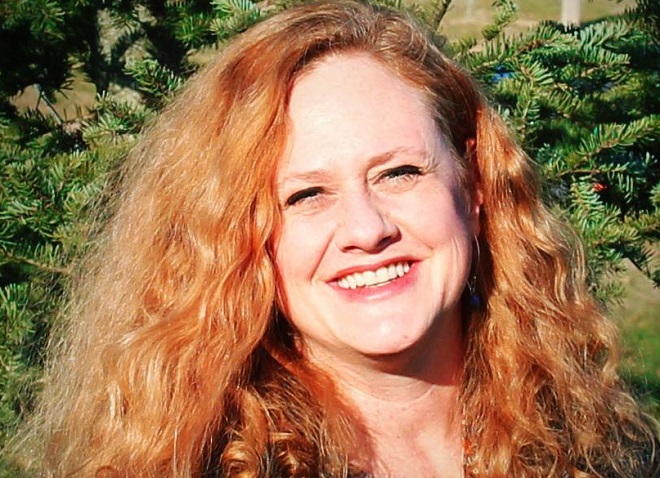 “I was born and raised in a small town in south/central Missouri almost to Arkansas with 2 brothers and 3 sisters. Living in St. Louis since 1995, most of my time is now spent taking care of my son, Owin, saying 'Hey!' in passing to my best friend and husband, Matt and freelancing as a graphic artist. I have been wanting to show my art for years and am just now getting around to it. The City Series is my most recent. I am hoping to do many more paintings of my favorite places and/or people in St. Louis as I am passionate about this city. Influenced by Toulouse-Lautrec and Van Gogh’s vibrant use of color and harsh brush technique, my style is typically realistic in shape and expressionistic in color. I guess the best way to say it is, “I've always wanted to be a painter.”

Everyone deals with their own struggles, each relevant to who they are, where they live and what is going on in their own lives. What rings true to you, might not to someone else. You need to listen to other people’s stories and try to see life through their eyes. In turn you also need to tell your story and try to get people to understand your own perspective.

What were the reasons that you started the visual art researches? How do you describe Carol Boss’ artwork?

I have known I was an artist since I was in grade school and have always loved music. It inspires me. It just came natural to listen to a musician then paint them. You can feel emotion in the music and translate it from brush to canvas. As far as painting the blues, it started when I met Big George Brock at a BB’s Jazz, Blues & Soups. Roger Stolle was managing him at the time. Big George shook my hand as he was greeting people walking into BB’s. His hand was so enormous it engulfed mine. And his voice so overwhelming it demanded your attention. I knew then I had to paint him, so I did, many times in fact. When I create art, I am really trying to convey a story, an experience and a feeling. When I paint a person, I hope to capture the look in their eyes, the expression on their face or a story told from their hands. "It is so nice to see people who put their passion of play music before anything else. I think many artist/musicians follow their dreams and give up some of the comforts of home that you typically have while working a 9-5 job. It’s in their blood. It’s who they are." (Artwork by Carol Boss)

I started playing the piano when I was 5 years old. I pretty much stuck to standard lessons unless the teacher would allow me to play a Lionel Richie piece. The piano was always a good way to pass time out in the country. In junior high school, I started playing trombone and continued into high school until I got a little bored. During sophomore year there were plenty of trombone players, so I asked my teacher if I could play something else. He told me the alto saxophone, which led me to filling open space in marching band and jazz band. Later I played the French horn, quads, key base and my favorite, the cymbals. I also sang in school and church choirs from a young age. Music has always been a huge part of my life. I relate better to a story through music. My husband and I go see music as much as we can.

Which acquaintances have been the most important experiences? What has made you laugh?

My friend Big George Brock and I spend quite a bit of time discussing southern cooking and sharing stories from our country upbringing, like him plowing fields with Pine Top Perkins, growing up on the same plantation as Muddy Waters and my favorite, him wrestling a bear. And me ice skating on the pig pond, jumping out of the hayloft of the barn and making my Grandma Edgar’s peach pie.

Big George introduced me to my friend and fellow artist, Sharon McConnell Dickerson, who, among other projects, has spent the past 16 years making life casts of blues legends. We recently collaborated on a project together, which will be at the National Blues Museum as part of a group show starting January 7. She and I have a lot in common, and we share many laughs together. I am learning so much more about the blues through her.

Pat Thomas, a visual artist and musician inspired me from the first moment I saw him in a documentary, “M for Mississippi”. Some of my friends and I drove down to see him at Highway 61 Blues Museum in Leland, MS a couple of winters ago. We ended up hanging out most of the afternoon visiting and listening to him play guitar and sing. He can tell a story like no one else!

Leo Bud Welch also inspires me. It takes a whole lot of motivation to release your first blues CD when you are 82 years old. He also makes me laugh a little about how much he loves the ladies.

Let’s not forget nineteen year old, Matt “The Rattlesnake” Lesch representing the younger generation of the blues. He plays that guitar like an old soul, delta blues style and smiles while he’s doing it. At Big George Brock’s Mother’s Day Show he played with Mud Morganfield and knocked the crowd’s socks off. He had to learn nine new songs for that show. He’s just amazing! 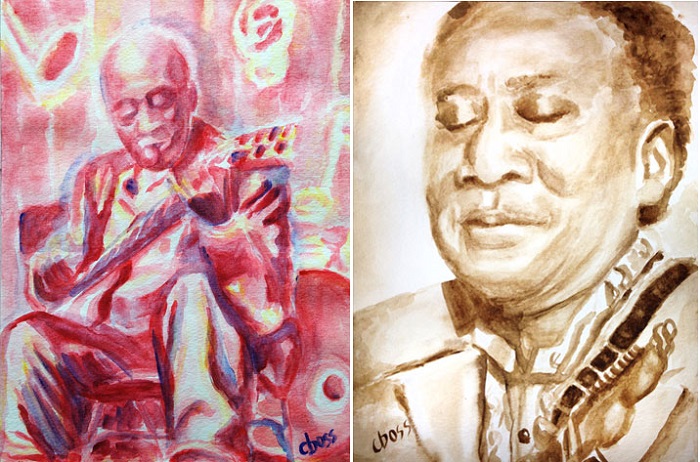 "When I create art, I am really trying to convey a story, an experience and a feeling. When I paint a person, I hope to capture the look in their eyes, the expression on their face or a story told from their hands." (Artwork by Carol Boss - Leo Bud Welch and the late great bluesman, Muddy Waters)

Miss an original sound. So much of music nowadays is a sample or remix from previous songs instead of just being inspired by them. I hope that people will remember their creative expression and speak up for what they believe in through their music and art. I do fear creativity will be expressed less due to social pressures and everyone being medicated for attention deficit disorder.

What does it mean to be a female artist in a “Man’s World” as James Brown says? What is the status of women in ART?

I’m from a long line of strong, working women who have a voice. I am proud to be a part of the art scene and have many friends who are artists. I like to think of us as creative people. There is enough to go around for everyone.

What is the impact of music and visual art to the racial, political and socio-cultural implications?

Where would you really want to go with a time machine and what memorabilia (artwork, record) would you put in?

Woodstock. I can’t even imagine the overwhelming feeling of all of those artists and musicians gathered together. I would paint a huge mural reflecting the times. Not sure there were any walls though. Maybe I’d paint a peace bus. 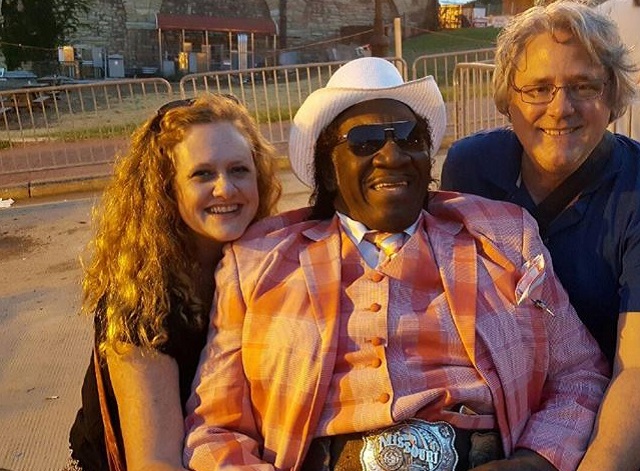 "Everyone deals with their own struggles, each relevant to who they are, where they live and what is going on in their own lives. What rings true to you, might not to someone else." (Photo: St. Louis painter, Caroll Boss with great bluesman Big George Brock and Matt Henderson, 2016)

It is so nice to see people who put their passion of play music before anything else. I think many artist/musicians follow their dreams and give up some of the comforts of home that you typically have while working a 9-5 job. It’s in their blood. It’s who they are.

I’d bring an interpreter and a bodyguard to spend the day with Zappa. I painted a picture of him for a friend of mine. I’m still trying to figure out what all his lyrics mean.

If I could hang out with Aretha, I’d like to ask her about her favorite foods. Sounds kind of silly, but I’d rather have one moment of sincere, simple conversation about something she truly loves, than bog down the moment with heart heavy discussion.

I’d like to ask Jimi Hendrix what was it like playing in front of those hundreds of thousands of people at Woodstock. I wish I had something more to ask. Just can’t stop thinking how young he was when he passed away. Maybe he was just too big for this world.