Q&A with photographer Jérôme Brunet - has shot a veritable who's who in the Blues, Rock, Jazz and Soul

"I’m quite optimistic about the future of music and art in general. We need it now more then ever!"

Jérôme Brunet: Into The Light

Photographer Jérôme Brunet picked up an instrument long before he picked up a camera. Jérôme Brunet was born in southern France and raised in Ontario, Canada. His passion for music began at the age of four, when he started studying as a classical cellist for eight years before moving on to the guitar. He continues to play guitar to this day. Jérôme displayed an early talent in the visual arts, studying the discipline in high school before completing a formal education in photography at the prestigious E.F.E.T. School of Photography in Paris, France.         Jérôme Brunet / Photo by © Dan Reule 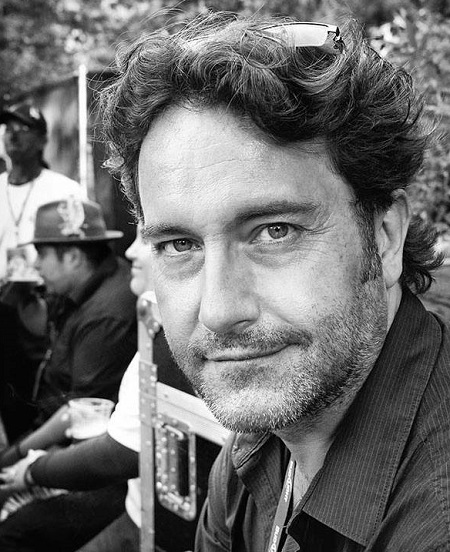 Jérôme has shot a veritable who's who in the Blues, Rock, Jazz and Soul genres. His award-winning photographs have been published internationally in Vanity Fair, Rolling Stone, Time, Billboard, Popular Photography, American Photo, Guitar World, Variety and The New York Times. He has also donated his work to the non-profit organizations Unicef, T.J. Martell Foundation and the John Varvatos Stuart House Benefit. Jérôme is now based in Las Vegas and is represented by the San Francisco Art Exchange, Rock Paper Photo, John Varvatos and The Black Gallery in Paris. Jérôme Brunet steps “Into The Light” with Kickstarter Campaign to fund new photo Book. “My first concert was Santana and now I’ve gotten to shoot Carlos Santana. Life has a way of coming full circle,” explains Brunet who recently launched his Kickstarter campaign for his 20-year retrospective photo book titled “Into The Light.” Specializing in the Blues, Rock, Jazz, and Soul genres, the photographer has shot Eric Clapton, B.B. King, Aretha Franklin, James Brown, James Cotton, Pinetop Perkins, Hubert Sumlin, Keith Richards, ZZ Top, Roger Waters, Tom Petty and many more.

What do you learn about yourself from the PHOTO ART and what does IMAGE mean to you?

Photography is only a means of expression, regardless of what medium you chose, it’s all about what you have to say!

What were the reasons that you started the photo art researches? What characterize your photo art philosophy?

I started playing music long before I starter photography and was lucky enough to be able to combine my two passions together. My philosophy in art has always been to follow your heart.

How started the thought of Into The Light - The Music Photography of Jérôme Brunet? Which is your favorite pic?

I started Into the Light a year ago and hope people will get a sense of the artists soul I captured! "Music has always been a part of my life. My mother was a professional classical musician and had me playing the cello at age four and then I transitioned into guitar as a teen once I developed an affinity for rock and blues music." (Photo: Jérôme with Roger Waters, BB King & Keith Richards)

I’ve met some of my greatest heroes backstage, too many to name but Steve Miller, Pinetop Perkins, Jeff Beck, Santana and B.B. King come to mind. Best advise was from legendary rock photographer Jim Marshall, whom told me to “take care of your negatives and your negatives will take care of you!”

Are there any memories from gigs, shows, festivals or studio sessions which you’d like to share with us?

I had the honor of being the official photographer for the Santa Cruz Blues Festival for over eight years. This boutique festival in northern California enabled me to shoot world-class musicians including the likes of B.B. King, Hubert Sumlin, Etta James, Joe Cocker, James Cotton and Buddy Guy, to name a few.

One of the true highlights of my career was meeting the legendary Muddy Waters pianist ‘Pinetop Perkins’, one of the last of the great Mississippi bluesmen. As I sat across from him backstage, taking pictures before the show, he lit a cigarette and shared a story with me of when he was a kid. He said that he’d go to the store to buy smokes for his grandmother so he could grab a couple for himself! The award-winning portrait from that session has now been published internationally in magazines, books, and now graces the cover of a documentary film poster!

What are the lines that connect: music and photo art? How does music affect your mood and inspiration?

Music has always been a part of my life. My mother was a professional classical musician and had me playing the cello at age four and then I transitioned into guitar as a teen once I developed an affinity for rock and blues music. The audio and visual passions collided when I was gifted a Nikon FM2 in high school and took up photography and went on to study at the prestigious E.F.E.T School of Photography in Paris, France. 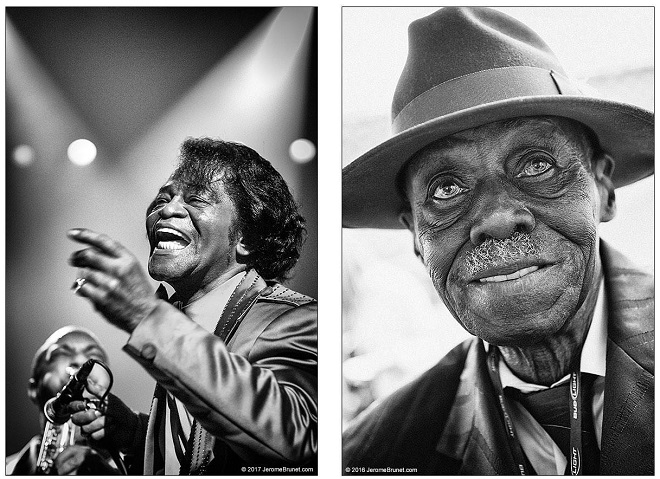 "Photography is only a means of expression, regardless of what medium you chose, it’s all about what you have to say!" (Photos © by Jérôme Brunet / James Brown & Pinetop Perkins)

How has the Rock Blues Jazz music influenced your views of the world and the journeys you’ve taken?

It teaches you to be true to yourself, the good and the bad.

I’m quite optimistic about the future of music and art in general. We need it now more then ever!

What is the impact of music and photo art on the racial, political and socio-cultural implications? 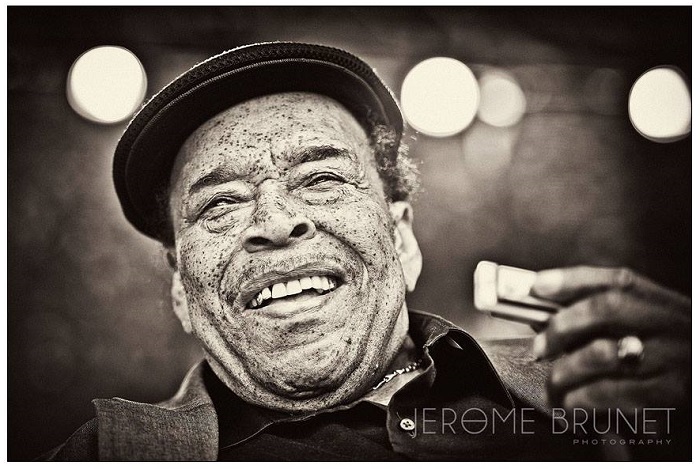