Rest in Peace Bobby Parker. You will be missed.

Bobby Parker was born August 31, 1937, Lafayette, Louisiana. He was best known for his 1961 song, "Watch Your Step", a single for the V-Tone Records label that became a hit on the US Billboard R&B chart. Born in Lafayette, Louisiana, but raised in Los Angeles, California, Parker first aspired to a career in entertainment at a young age. By the 1950s, Parker had started working on electric guitar with several blues and R&B bands of the time, with his first stint being with Otis Williams and the Charms. 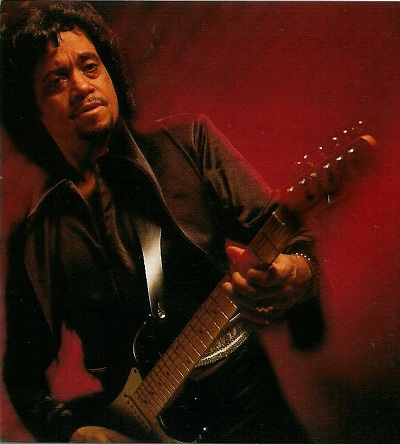 Over the next few years, he also played lead guitar with Bo Diddley (including an appearance on The Ed Sullivan Show), toured with Paul Williams, Sam Cooke, Jackie Wilson, LaVern Baker, Clyde McPhatter, and the Everly Brothers. In the waning years of the decade, he also toured with Chuck Berry, Buddy Holly and Little Richard. His first single was recorded in 1958, while he was working primarily with Williams' band, and was titled "Blues Get Off My Shoulder". During that same year, he also performed frequently at the Apollo Theater in Harlem.

By the early 1960s, Parker had settled into living in the Washington, D.C. area and played at blues clubs there after having left Williams' band. He recorded the single "Watch Your Step" in 1961, a regional hit that was later covered by the Spencer Davis Group, Dr. Feelgood and Santana. The song was also the inspiration for The Beatles 1964 hit single "I Feel Fine". George Harrison said that Lennon's riff was influenced by the riff in "Watch Your Step" which was covered by the Beatles in concerts during 1961 and 1962. On January 1, 2012, Parker's "Watch Your Step" sound recording became Public Domain in Europe, due to the 50 year copyright law limit in the E.U.

Due to the success of the song, both in the United States and overseas, he toured the UK in 1968 and recorded his next hit, "It's Hard to be Fair". Jimmy Page was a fan of Parker's and wanted to sign up Parker with Swan Song Records. Page offered an advance of US$2000 to fund the recording of a demo tape, but Parker never completed the recording, and an opportunity for Parker to be exposed to an international audience was lost.

For the next two decades, Parker played almost exclusively in the D.C. area. By the 1990s, Parker started to record again for a broader audience. He recorded his first official album, Bent Out of Shape, for the Black Top Records label in 1993, with a follow-up in 1995, Shine Me Up. In 1993, he also was the headliner for the Jersey Shore Jazz and Blues Festival. Parker continues to perform as a regular act at Madam's Organ Blues Bar in Washington.