The British blues/jazz/rock guitarist Eddie Tatton of Out Of The Blue talks about Peter Green, Junior Wells and his friend Kevin Thorpe

Eddie Tatton: Out Of The Blue, Into the Blues

Eddie Tatton is a British blues/jazz/rock guitarist very much in the Robben Ford vein. Intelligent, melodic leads, interesting use of scales and 'outside' playing, and generally just a very talented and enjoyable player. Until recently, he was playing with a band called Out Of The Blue, brainchild of British blues singer Kevin Thorpe.

Out Of The Blues respect the blues tradition but they like to stretch the outside of the envelope. They look beyond the tried and tested 12 bar formula to create a modern, thoroughly original sound that fuses jazz, rock and of course blues. Whichever way you chew it, their music, with Kevin Thorpe's gravel and grit vocals, definitely comes from the heart to stir the soul. 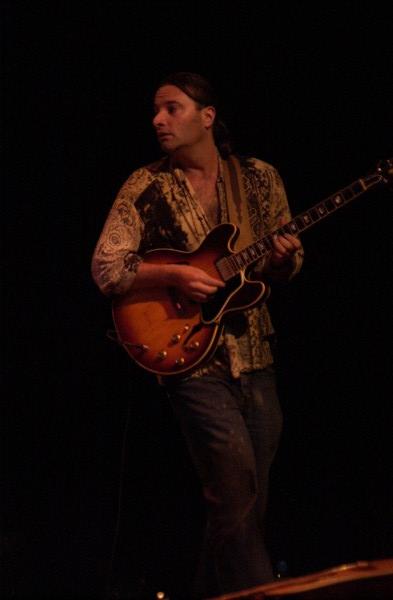 Scott Duncan, Blues in Britain Magazine wrote for the band: "Lead guitarist Eddie Tatton (Nightmares on Wax, Zero 7) is one of the hippest guitar players on the scene today, his inventiveness never ceases to amaze. Eddie's solos push back the boundaries of electric blues guitar, his unique style melding the poise of Robben Ford, with the grace of Larry Carlton to bring an unparalleled sophistication to Out Of The Blues' overall ensemble sound. In addition Out Of The Blue have the very gifted keyboards player Jon Dyke (Elkie Brooks Band, Patricia Kas, Larry Garner Band) and a dynamic rhythm section with Nigel Lobley on drums and Simon Sparks on bass, making them, for the discerning blues punter, the most rewarding live aesthetic experience available."

Out Of The Blue have played major club and theatre dates all over the UK and Europe. Kevin has played in the USA with Paul Rishell and Annie Raines at various Eastern Seaboard venues including the prestigious House of Blues in Boston; for these dates the band was augmented by guitar legend Ronnie Earl. In February 2001 Kevin and Eugene "Hideaway" Bridges gave four performances at The Budweiser Low Country Blues Festival in Charleston, South Carolina, USA. Out Of The Blue have toured the UK and European festival circuit with appearances at Burnley, Colne, Oxford, London, Edinburgh, Dublin, Chalons-en-Champagne, Cognac and Coutances. Out Of The Blue have also supported the late Junior Wells, Robert Cray, Larry Garner, Robben Ford, Sherman Robertson, Peter Green and Tracy Nelson. Out of the Blue was the choice of backing band for the legendary Memphis Horns at the Edinburgh Jazz Festival, and subsequent tour of Europe and Ireland. Sadly Kevin Thorpe died suddenly after a performance in Newark on September 11th, 2010.

Lets talk with Eddie Tatton about the BLUES....

Eddie, when was your first desire to become involved in the blues & who were your first idols?

It was a great time in the late 70's in England to be a teenager learning guitar. Every week on the UK pop charts there would be great bands with great guitarists and we had The Old Grey Whistle Test on TV also where live music was championed so i heard guys like Eric, Ry Cooder, Little Feat, etc. The punk thing happened and pop music became more electronic so naturally you had to look to the past for inspiration so of course i became obsessed with Jimi, Cream and other bands like Steely Dan. I became a blues musician after seeing BB King's birthday gig on TV about 1987 with SRV, Etta James who sadly just passed, Albert King, Dr John and many more. I was SO knocked out! Blues music seemed to be a direct language of the soul. 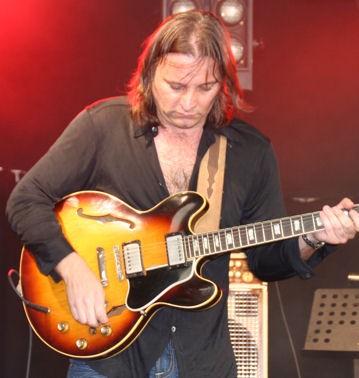 I saw Whitesnake in some arena in the UK about '83 and was massively disappointed. First few albums were really bluesy and i loved Micky Moody and Bernie Marsden. Micky had left by then and Mel Galley was on guitar who was great but the whole thing was a row. I realised then music was better in smaller venues. I learned just about everything i could by copying records by Thin Lizzy, Rainbow, Jimi, Queen, The Police, Chic, absolutely anything with a guitar.

Wow, worst moment?? Ha! There's no such thing. You learn so much from the bad times and just hope there aren't many. I had been involved with a band for three years writing, performing. We were offered deals from every major label in the UK and turned them down to be signed by Interscope in the USA. Huge deal!!! Signed in Sept 2001, all good! Went to a music shop to buy gear for the studio and on the TV in the shop i noticed footage of a plane going into the side of a high rise. As the news unfolded i got my things and drove home. The world had changed and we'd lost the deal. I could't feel sad because a lot of lives were lost that day.

Best moment was probably signing that deal! How things can change!

As i said, i think blues is a language in itself. As a guitarist, forget the blues scale. Robert Johnson, Son House, etc weren't thinking about scales. They just communicated with an instrument. By playing a note you can make the hairs on someones neck stand up. Isn't that amazing!!!! You can't write that or teach how to do it. That's what blues is and that's exactly how i can tell if i like something, if that happens to me.

Personally i have learned that i seek the melancholy, darker side when i listen and also when i play i think. Eric Clapton once said that sometimes when you go deep you don't always like what you find there. the late, great Kev Thorpe, our singer always said playing was theraputic. It does help, massively!

Hopefully they listen and try and get what i try to do. That is as important as me trying in the first place. 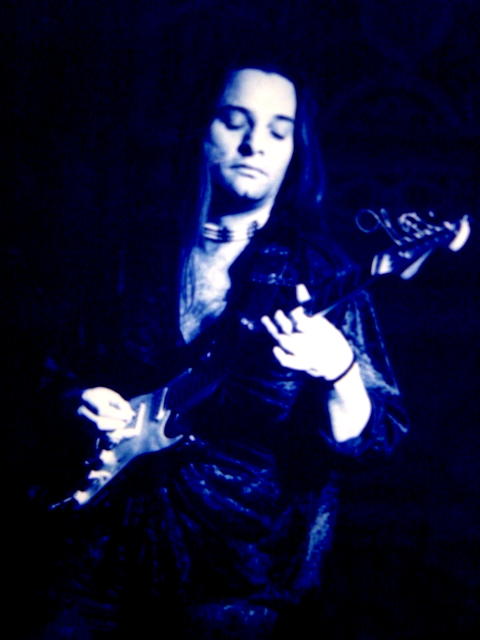 How do you describe the philosophy of your sound & your progress?

To get as close to a voice as i can! Derek Trucks does this! He plays guitar but i just hear an old gospel singer from the 50's. He sings through the guitar, with breaths, falsetto, everything. When i started i thought it was about arranging notes and to be better you had to be able to play them fast. Singers don't think that way.

Who are your favorite guitarists, where did you pick up your guitar style?

Always loved Robben Ford and Larry Carlton is god to me! Amazing players with great musical vocabulary. These days i love to play with fingers so i don't use the pick as much. Listen a lot to Derek Trucks, Mark Knopfler and Ry Cooder.

BB i think! Hold back, say something.

Robert Johnson, Howling Wolf, Muddy. Not sure what they'd think of me or how their music has been represented over the years. In England we have an award called the MOBO's, Music of Black Origin. Never seen anything to do with blues in it.

It's honest, to the heart. People i hope will always want that. I wish people would stop listening to music they are fed, and go seek out music they actually may like more. We just lost Etta. Many people will have heard her now she made the news.

Difficult really! It's always grass roots level. In the end it's down to the artists and labels to push themselves up. It starts there but SO badly needs people to buy music. The digital age is not supporting the genre and why should it? Bands, artists need us all to buy their CD's and go see them play, lots, and bring friends. Hard times are upon as and it's so hard to make a living as a musician. 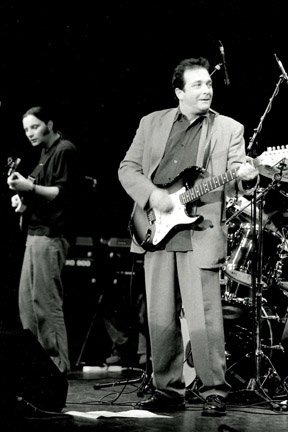 Tell me about the beginning of the Out of the Blue. How did you choose the name and where did it start?

Kev chose the name. He wrote Blues in a Bottle and won a songwriting competition with it. Such a tune!!! Put the band together around it and played at Colne Festival in the UK. We had Johnny Dyke in the band and myself and we both had a jazz influence so it seemed a fitting name.

Loved our gigs with the Memphis Horns!!! We also worked with Paul Richell from the USA which was great! He has no time for egos, rightly so too! There's too much of that unfortunately. So someone plays guitar well? So what! It's your job, it's not rocket science! I'm not naming names. He said music is just a big party that we're ALL invited to.

He asked the trombone player to get the drummer! Bone player said he didn't know where he was. Junior asked a further three times with the same answer then said "You fined f**ker!"   Hilarious!

I wonder if you could tell me a few things about your experience with Peter Green.

We were kept away from Peter Green as it was one of his first gigs back. Testament to how playing music is therapy. He was rusty but got better and i did well up when he player Albatross. He was still in there and gradually coming back.

From the musical point of view is there any difference between British Blues & US Blues?

Brits learned blues from the US! They did this back in the day by begging, borrowing and stealing the records and guys like Eric learned note for note Freddie King solos. Think is now when you see old footage of Buddy Guy, etc they were chucking the guitar around and performing at the same time. Us Brit guys nave a habit of just standing there. Think we've missed something. 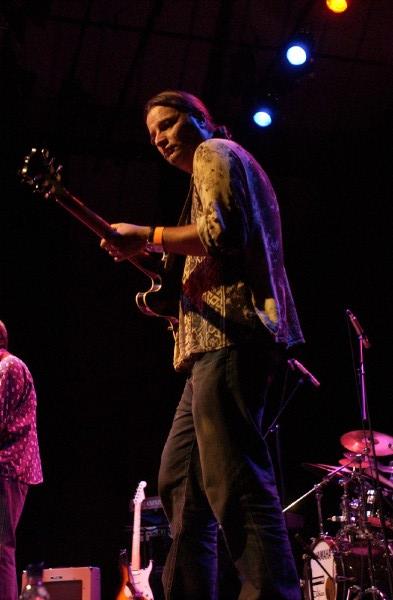 Yes!!! I sincerely wish you guys all the best. The world economies are in a right state as you guys know, with our country going the way of yours. Really hard times for all of us caused by a greedy few and a government that doesn't know how to help us back.  Please hang in there and support live music. Hopefully we won't be subject to the kind of poverty that blues was born from.

and one last, I would like to put a song or comment next to each name & expression.

Armadillo Records & Out Of The Blue